Do you want to enjoy sailing in Croatia without the crowds? Try Istria and the Kvarner Gulf

Heavenly blue waters, lush green countryside and picturesque fishing harbours coupled with historical sights and majestic mountain ranges will provide the perfect backdrop for your holiday. Most tourists and sailors head south, so you can enjoy the sea without the crowds.

Heavenly blue waters, lush green countryside and picturesque fishing harbours coupled with historical sights and majestic mountain ranges will provide the perfect backdrop for your holiday. Most tourists and sailors head south, so you can enjoy the sea without the crowds.

Istria is the largest peninsula in Croatia and, together with Kvarner Bay, forms a vast region around Pula. Distances between the islands in the Kvarner Gulf are longer with some pretty decent winds. More experienced sailors can take even longer crossings for some serious sailing.

This part of the voyage is usually quite windy, so no need to worry about getting bored, you'll get some serious sailing done. Wave goodbye to Pula and from the deep bay head SSE towards the Kamenjak Peninsula and sail around it. You can also dock here, the best being in Polje Bay. You’ll pass the distant Porer lighthouse and some smaller islands along the way. 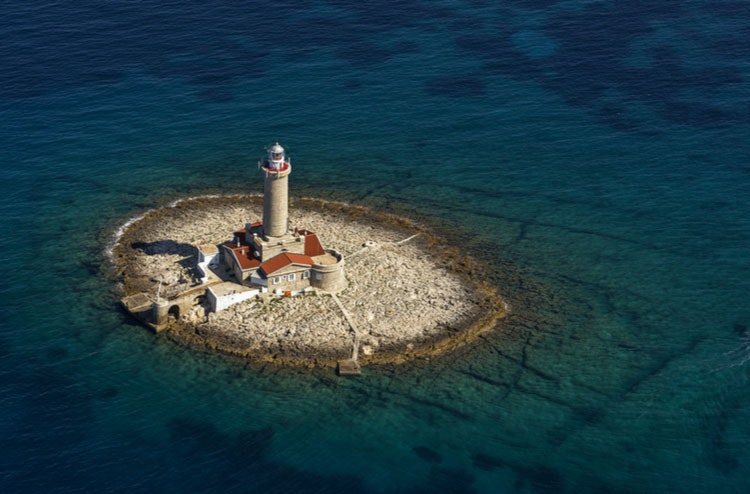 Porer lighthouse on the way from Pula

Then sail eastward towards Kvarner Bay to the island of Unije. It’s best to land in the bay of Maracol on the east side of the island, where there are buoys and it’s only about 15 minutes on foot to the village.

After a refreshing morning dip, raise anchor and sail between the islands of Unije and Vele Srakane. The small but truly remarkable island of Susak awaits. There is only one harbour, but this sandy island is well worth a visit.

The island is composed of a 100m thick layer of sand blown onto a limestone rock slab. It is said that every ten years the sea carries away one centimetre of the island. Thanks to the sand, there is a nice beach in the harbour with a very gradual incline making it especially ideal for families with children. 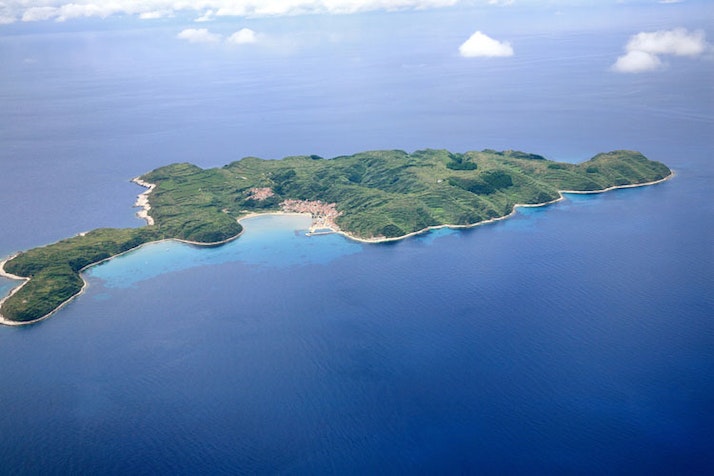 We recommend a walk to the lighthouse at the northwest end of the island. Stroll through the village on the top of the island, where you can enjoy the view or visit the ancient cemetery. All tracks lead through the sand, and part of the tracks are so beaten through the centuries that they almost resemble tunnels covered with lush vegetation. An Italian winemaker grows wine on the island and you can buy excellent red wine here.

Then continue sailing ENE towards Losinj, around the islands of Mortar and Koludarc and then head SE through the deep bay of Mali Losinj. You can anchor in Mali Losinj marina. This very well organized port allows online booking. Enjoy its lively atmosphere over dinner at the local pub and take a stroll along the scenic waterfront. There is also a city harbour nearby.

The natural island of Losinj resembles a forgotten paradise. Rocky coastline, inaccessible white beaches, captivating aroma of pine, macchi and oleander and the azure sea will truly take your breath away. The sea is clean, clear and full of life. Even in high season you’ll find beaches where you can find yourself completely alone. There are many fish species in the sea and dolphins are often to be found here. The island is mostly fed through fishing and the small town has retained its fishing atmosphere.

The island of Losinj is divided into two tourist centres: the island of Mali and Veli Lošinj. The northern part of the island is mountainous, the southern part is green and hides many fabulous bays and beaches. 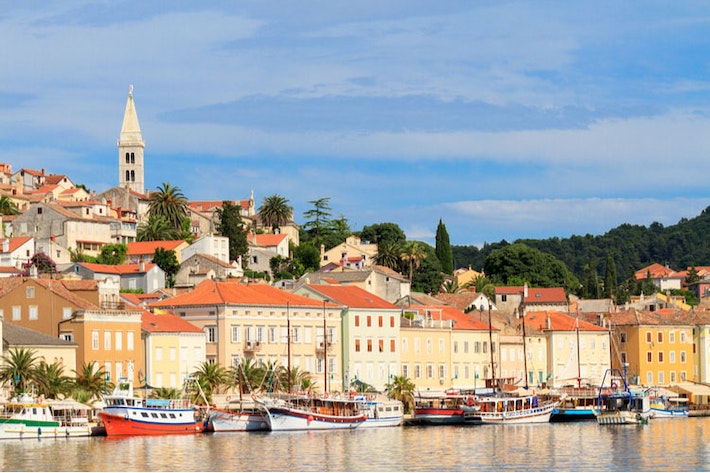 The natural island of Losinj resembles a forgotten paradise. Rocky coastline, inaccessible white beaches, captivating aroma of pine, macchi and oleander and the azure sea will truly take your breath away. The sea is clean, clear and full of life. Even in high season you’ll find beaches where you can find yourself completely alone. There are many fish species in the sea and dolphins are often to be found here. The island is mostly fed through fishing and the small town has retained its fishing atmosphere.

The island of Losinj is divided into two tourist centres: the island of Mali and Veli Lošinj. The northern part of the island is mountainous, the southern part is green and hides many fabulous bays and beaches.

From the bay of Mali Losinj sail SE and follow the coast of Losinj. Give into the temptation of mooring between Ilovik and the island of Sveti Petar, where you’ll find very well-protected straits with plenty of buoys. Then continue NE between the island of Dolin and the northernmost tip of the island of Pag, Cape Lun.

Welcome to the island of Rab. An island in the middle of the Kvarner Bay, where mountains, beautiful beaches with white sand and the turquoise Carribean-like sea all converge. The east coast is rough and inhospitable. It is a living testament to how strong and unforgiving the bora can be. The west coast is protected against the destructive boro by the Kamenjak mountain and Straža hill. To the south, rather than the typical white beaches, there are steep cliffs leading to the sea. 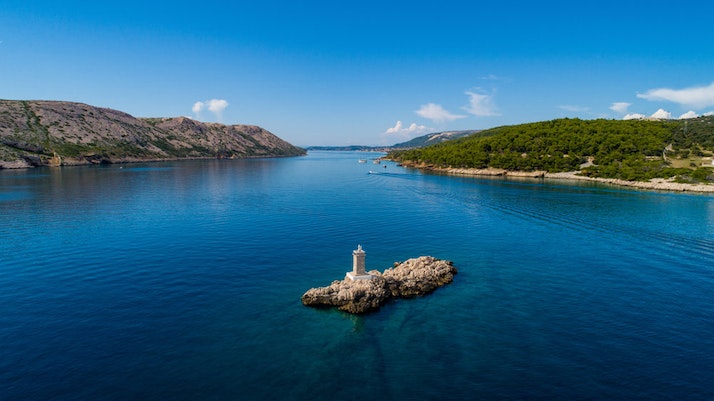 The west coast is beautifully green and offers plenty of idyllic coves. Here you'll find the romantic town of Rab, the pearl of the island with its amazing and captivating atmosphere. It hides precious treasures from the Antiquity and the Middle Ages - regular chessboard-like stone streets, 12th-century walls that surround the intact medieval centre, well-preserved sea gates, steep stairs leading from the walls to the sea, and the silhouettes of the four church towers. Above the city stands the Cathedral of the Assumption of the Virgin Mary (the most valuable building of its time on the Adriatic), next to the 26-metre tall bell tower. You can safely anchor in ACI Marina Rab. 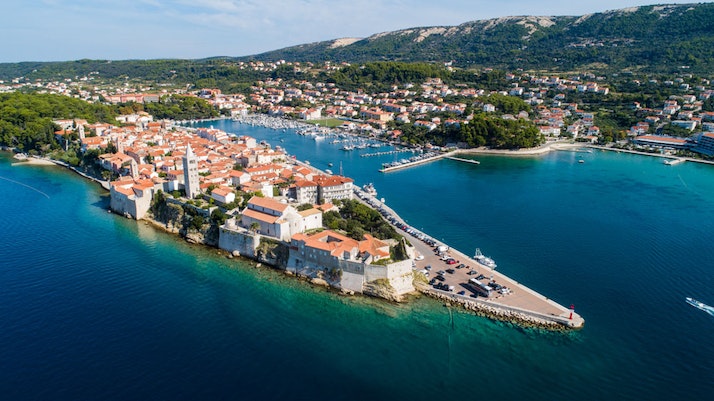 The central event here is the Rapska fjera (Rab Festival), founded on July 21, 1364. Originally, the festival was dedicated to St. Kryštof for saving the city from destruction. Currently, the festival lasts almost the entire summer.

The local specialty is Rabský dort, which has been a tradition since 1977 when it was prepared by nuns for Pope Alexander III. Only a few women on the island know the secret recipe, who pass it on from generation to generation.

Hoist the sails and sail on the north side of the island of Rab to the large and fascinating island of Krk. You can anchor in Marina Punat, one of the most pleasant and best organized ports in the area. Be careful before entering the shallow bay in Punat Bay (Puntarska draga).

This island, the largest in Croatia, is full of forests, vineyards, olive groves, karst meadows and sheep pastures. Here you’ll discover unspoiled nature and small white pebble beaches nestled in tall rocks. In addition, a number of beaches here have been awarded the Blue Flag (this eco-label is awarded on the basis of a series of stringent criteria relating to water quality and environmental protection). 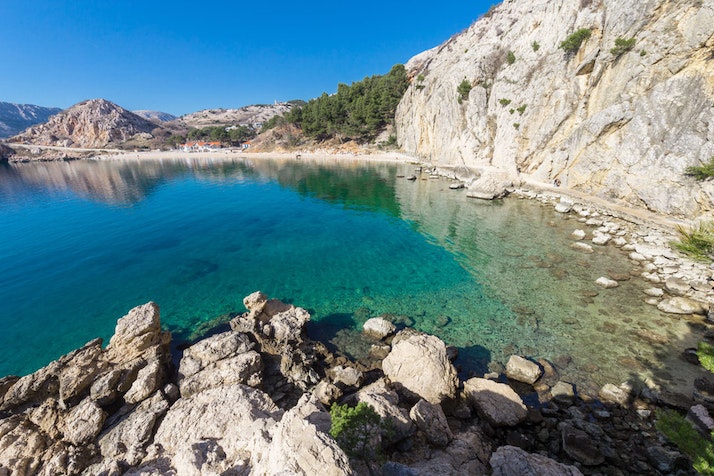 Many rare buildings, churches, monasteries and remains of the Roman Empire (such as the rare Roman mosaic) have been preserved on Krk. Around the town of Krk, there are the remains of a fortification and a watchtower from the 13th century. The guided tours of the Franciscan monastery are fascinating, ending with home-made brandy tasting. There is also a nice cycle path through the island.

Enjoy the voyage to the island of Cres, an island vying for the title of largest island with Krk. Passing through the Srednja Vrata canal, beware of the strong wind gusts from the north. You can dock in the local port.

Along the west coast of Cres you will find countless romantic coves and breath-taking beaches. The Zanja Bay is an approximately  30-metre-long "Blue Cave", which is definitely worth a visit. Near the town of Osor, there is a fabulous and not very well-known beach called Mali Bok (GPS coordinates 44 52' 30.78''N 14 26' 43.68''E).

Also worth a visit is the Vrana Lake on the interior of the island. The island is also famous for its long eco-trails, these trails provide a nice stroll and you may also catch a glimpse of the rare griffon vulture. The sea around the islands of Cres and Losinj is also home to bottlenose dolphins.

In the north of the island of Cres is the pleasant and ancient harbour town of Cres, a town with a rich fishing history. It is fortified with walls and intertwined with narrow streets and miniature squares.

Would you like to enjoy the local specialty? Cres lamb roasted on a spit or baked under a baking lid called a “peka” is an excellent choice. We also recommend the delicate seafood. 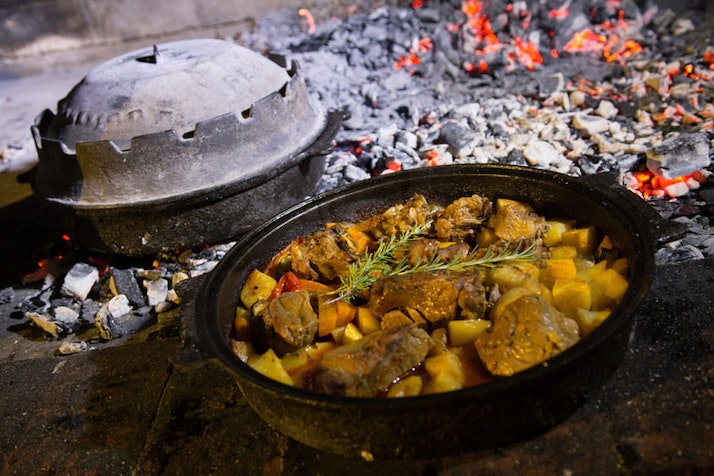 Enjoy the last day to the fullest. Sail past Cape Pernat on the island of Cres to Medulin Bay. On the way, take a dip in one of the beautiful bays of the Premantura peninsula. 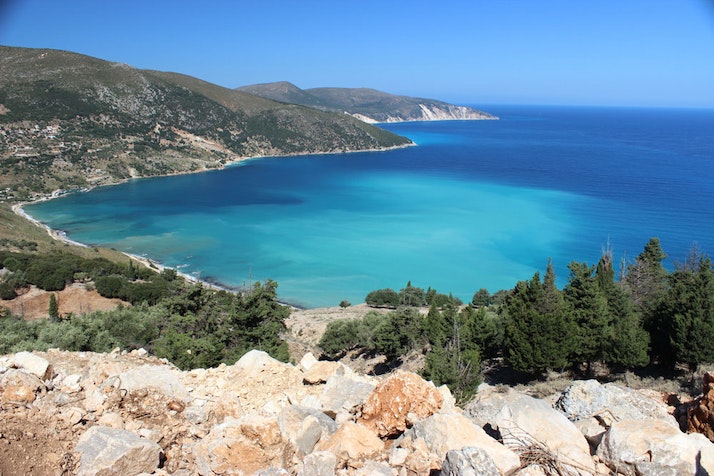 There are several smaller islands and shallows with strong jugos which can make the entrance to the inner bay impassable.

At the very heart of Pula, there is a unique Roman amphitheatre, one of the most well-preserved in the world. It served mainly for gladiatorial battles in the past but is now again full of life thanks to regular cultural events. The most stunning view of this arena is at night, especially because you won’t have to share the atmosphere of this truly magical place with tourists. 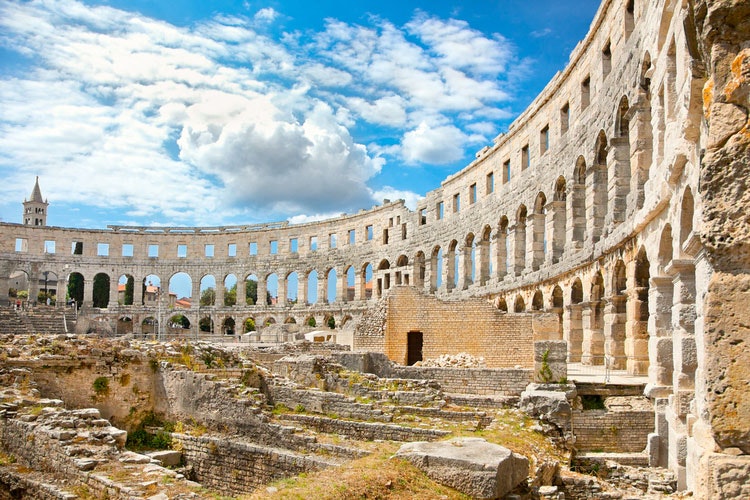 In the heart of Pula is a unique Roman amphitheatre

Where to go in Istria? 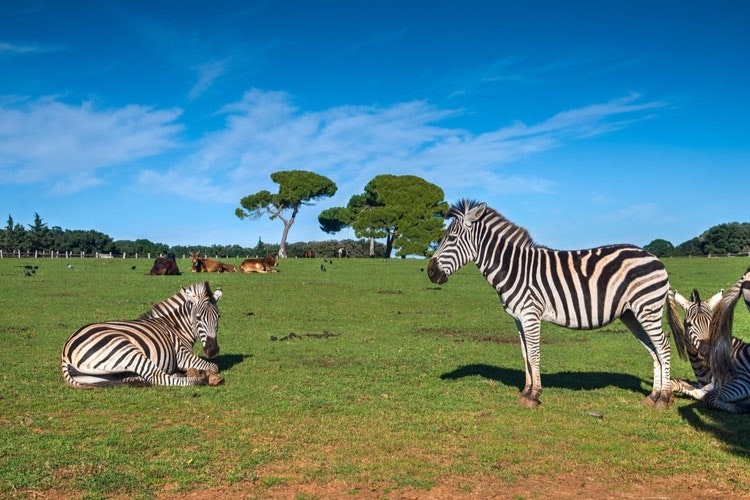 Tempted by a route full of good winds, beautiful bays and ancient monuments? Take a look at our boat deals and make your perfect choice

I want a boat in Istria

Looking for further inspiration where to sail in Croatia? We have more route suggestions for you. The route from Split we've packed with attractive and lesser-known places and is unique, offering two variants of the route depending on wind changes. Find further inspiration in our route for children from Biograd to the sea, It's full of fun and hot tips. And lovers of the Game of Thrones will love with the route from Dubrovnik to the film locations.