Where was the hit series Game of Thrones shot? Take a walk in the places where Ned Stark lost his head, Tyrion Lannister defended Blackwater Bay and Cersei Lannister settled accounts with the Tyrells. This cruise, with its focus on the show’s filming locations, will take your breath away!

The long-awaited new series of the fantasy saga Game of Thrones has just started. Hordes of fans are eagerly anticipating the final episodes of this spectacular series filled with of intrigue, violence, sex and power struggles.

We invite you to the most famous film locations in Croatia. Take a walk in the places where Ned Stark lost his head, Tyrion Lannister defended Blackwater Bay and Cersei Lannister made amends with the Tyrells and the Sparrows.

You might already have travelled Croatia widely - but this voyage, based on its exploration of film locations, will take your breath away! 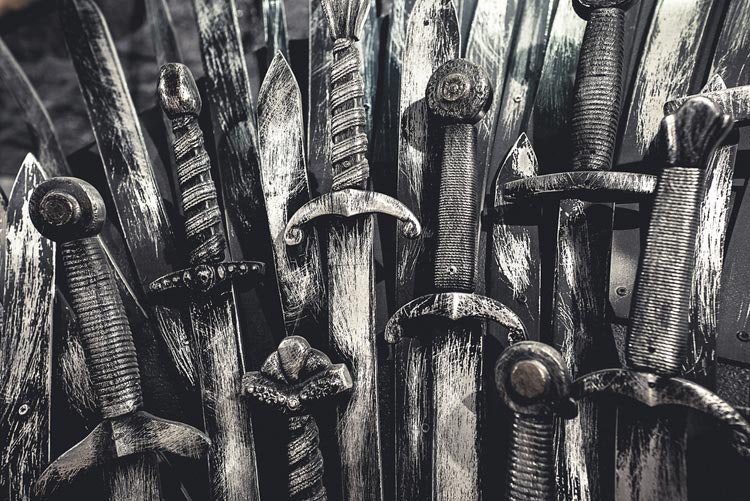 Who will sit on the Iron Throne?

Where was Game of Thrones series filmed?

Croatia’s Island Empire has truly inspired the creator of Game of Thrones. And no wonder! The outstandingly beautiful countryside, rugged coastline and ancient white marble monuments make this country a dream location for filming a fantasy saga.

Ideal yachting is guaranteed by the excellent yachting infrastructure with its many marinas, city ports, restaurants and buoys.

Embrace fantasy and relive all the spectacular scenes of this iconic series. Your trip starts right now in Dubrovnik. 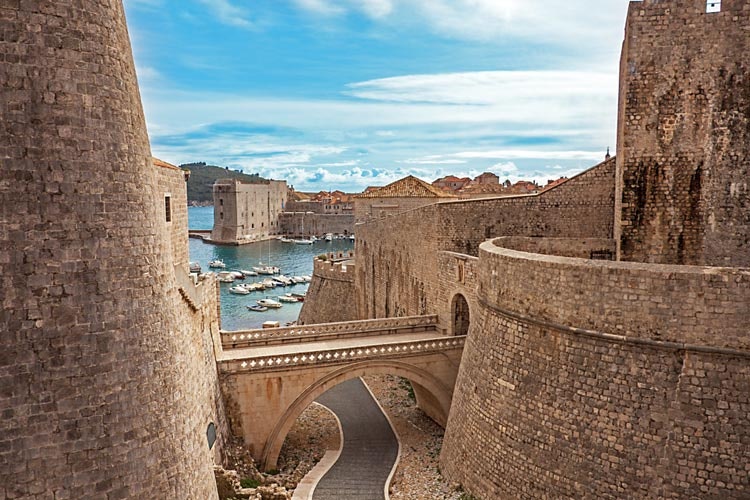 Welcome to King's Landing, the capital of the Seven Kingdoms and the seat of the Kings of Westeros. You are in a place where intrigues are woven, treason plotted and vengeance is served.

It is not surprising that the creators of Game of Thrones have loved the stunning Dubrovnik so much. The jewel in the crown of Croatia is surrounded by impressive walls which add to its ancient character and photogenicity. Do you know which scenes were filmed here?

Stradun has appeared in many scenes, not only in the second series.This main street in Dubrovnik passes directly through the city center from the Pile Gate to the old port. It's made entirely of white marble. It is 300 metres long and, along the way, you will wonder at the small and large Onofrio Fountains, Saint Saviour’s Church, the Sponza Palace and Saint Blaise’s Church.

Does this street seem familiar? It was down this street that QueenCersei made the walk of shame at the end of the fifth series in the episode entitled Mother'sMercy. She walked stark naked to repent for her sins. You can make the walk too – though we do, of course, recommend that you keep your clothes on.

The main entrance to the city is through the Western Double Gate: Pile Gate. A stone bridge over a moat and a wooden drawbridge lead to the gate. From the outer gate, one descends the steps to the inner gate, which is part of the main city wall. The castle moat has been turned into a park with beautifully flowering pink oleanders.

In one action scene, Sansa flees the city through a side corridor, in fact an inconspicuous alleyway to a garden from the main road to the city. The mob scene that preceded Sansa’s flight was filmed right next to her escape route by the Pile Gate. 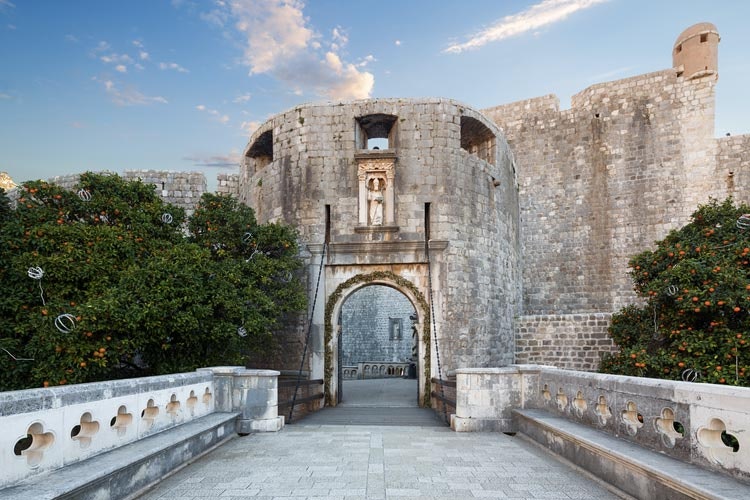 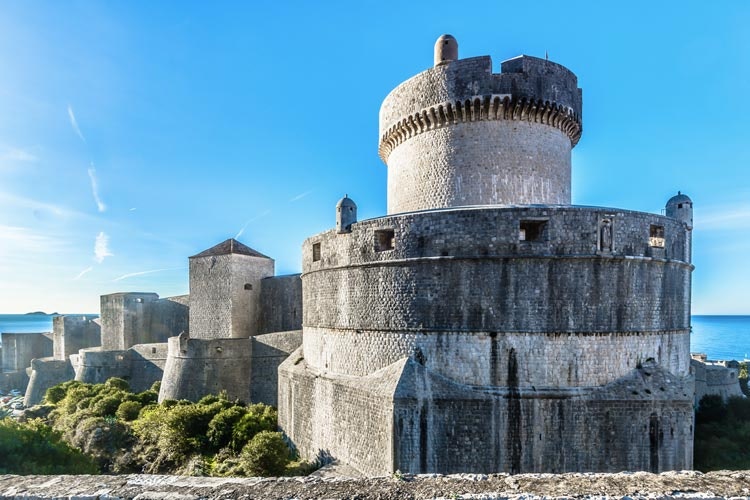 The Minčeta defensive tower as the House of the Undying

The Lovrijenac fortress lies at the very edge of Dubrovnik, on the coast and high atop a cliff.  In the series, it served as The Red Keep, the heart of the King's Landing. It is the seat of the royal court, and there can be found the Iron Throne, which Aegon is said to have forged "out of thousands of swords of his defeated enemies". According to legend, he kept the swords sharp because he believed that no regent should sit too comfortably.

The bay in front of the fortress was used as the main filming location for the incredibly tense Battle of the Blackwater. Wildfire will not burn you, but nonetheless the environment really does give a sense of theatre.

This, too, is where the tournament in honor of King Joffrey was held in the second series. The bay also features in a scene where the Gold Cloaks kill King Robert Baratheon's bastard sons. The fortress and bay certainly would not have needed any digital enhancement. 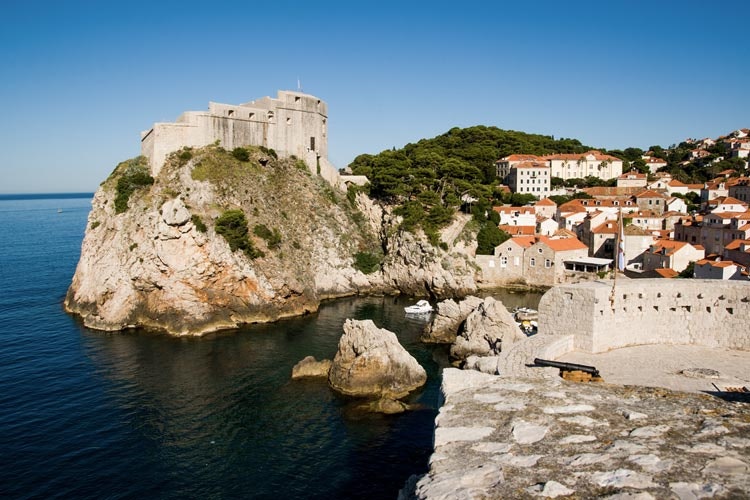 The bay at Fort Lovrijenac

Above the entrance gate to the Fort Lovrijenac you’ll find written a motto rightly characteristic of Dubrovnik: "Non bene for this libertas venditur auro" - "Freedom is worth more than all the gold in the world."

In any case, the place has an impressive atmosphere and theatre festivals are held here every year. The port of Lovrijenac is famous all over the world for its production of the play Hamlet. Enjoy exceptional views of the sea, as well as the pleasant music and refreshment offered by the Buza Bar, located on the rock.

Dubrovnik is undoubtedly the most beautiful city on the Croatian Adriatic coast. The islands of Korcula, Mljet and Lopud, where vast forests, vineyards and olive groves spread, are in close proximity. Thanks to its harbour, the whole area is rich with history and culture.

For centuries, Dubrovnik was an important centre for sea trade. The biggest boom occurred in the 15th century, when it was one of the most important trading posts in Europe. In this period, Dubrovnik was also a great competitor of Venice, and since 1979 it has been listed as a UNESCO World Heritage Site. 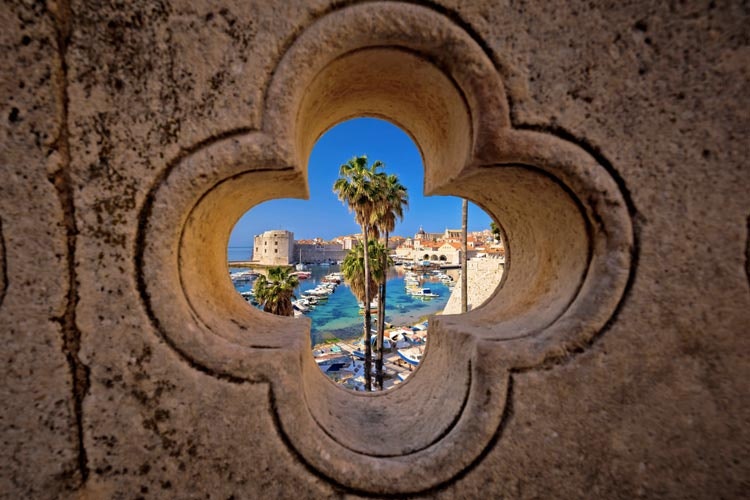 Anchoring in Dubrovnik and around

The producers of Game of Thrones have also taken a liking to other locations in Croatia and you have some of them within easy sailing distance of Dubrovnik.

Right here, in the second series, Daenerys visits the Spice King and asks him for ships – but he refuses. A number of other scenes from Game of Thrones have also been filmed in the local botanical garden and the former Benedictine monastery.

The main attraction of the island of Lokrum is the small lake called the Dead Sea, which we highly recommend you visit. This crystal-clear lake is connected to the sea. 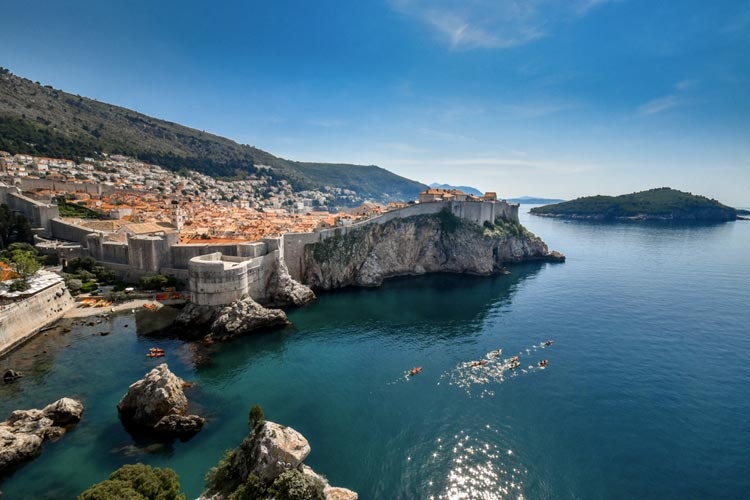 The impressive Dubrovnik walls and the island of Lokrum

You will know the Trsteno Arboretum as the gardens of the King's Landing; its grounds are witness to many secrets dealings and trysts. It is here, in the lush, exotic backdrop of the arboretum, that Tyrion and Varys plot who should rule the Seven Kingdoms.

Trsteno Arboretum can be found in the small village of Trsteno, north of Dubrovnik.

Filming took place at other interesting locations in Croatia. We will take you to Queen Cersei's palace and to the streets of the free city of Braavos in the next episode!

So, are you ready for your Cruise of Thrones? Rent a boat in Dubrovnik and sail away. Who knows, maybe it will be one of Euron Greyjoy’s fleet, whose family currently has the largest and most powerful armada. And right now it is anchored in King's Landing.

Of course, there are also other beautiful islands and islets waiting for you not far from Dubrovnik. Check out other tips and suggestions for specific routes around Dubrovnik.