Sailing in Croatia: a complete 7-day itinerary from Split

Try out our 7-day itinerary from Split this year, packed with both popular tourist spots and lesser-known ones that are simply enchanting

Beautiful bays with clear waters, adventure in a magical blue cave, ancient towns... Take advantage of it all with our recommended 7-day itinerary from Split, Croatia. Below you'll find a detailed day-by-day schedule, including tips on where to anchor and what to look out for along the way. And in case you get caught by the Bora or Sirocco, we've got alternatives for you, too.

Complete 7-day itinerary from Split with tips with anchoring tips

Saturday — setting off on an adventure

After checking in and taking command of your boat, you’ll be able to spend the night at the local marina. If you want to enjoy your sailing trip to the fullest, simply weigh anchor in the afternoon and set sail for the island of Brač (11 NM away).

YACHTING.COM TIP: If you don't feel like sailing from Split, set sail from the nearby towns of Trogir or Kaštela.

The limestone island of Brač, with its many remarkable karst formations and maquis shrubland, as well as its vineyards and olive trees, still bears witness to its ancient inhabitants. The famous Brač white stone was used in the construction of the Diocletian Palace in Split. Brač is also famed for its cheese, lamb and fish, so be sure to sample them while on the island. Drink to a successful cruise with an excellent Brač wine or rakija! 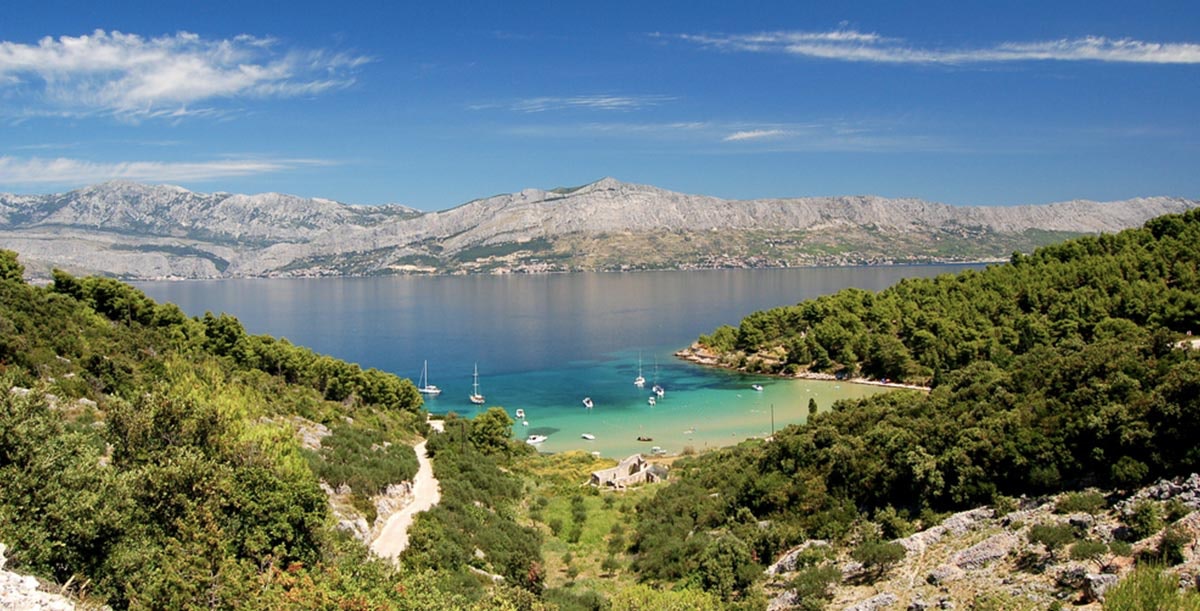 View from the limestone island of Brač

Sunday — sails trimmed and onward to Vis and the military tunnels

Sail to the town of Vis on the island of Vis (20 NM). Until 1992, Vis was a huge army base and there remains much evidence of its military background. Long, narrow tunnels, which once hid submarines and naval ships, now lie abandoned, home only to fish and seagulls.

You’ll eventually reach the curious military tunnel situated in Rogacac Bay, west of the port of Vis. This is a good spot for anchoring. The tunnel is 100 m long and is currently easily accessible. From this bay, it is less than 2 NM to the port of Vis.

The island of Vis boasts unspoilt nature and vibrant social life. Look at its jagged shape on the map and you’ll immediately understand why it is such an interesting island for sailing — more than 50 bays offer something for every sailor. Enjoy silence like no other and a sky full of stars in one of the deserted bays — or head to a busier harbour in one of its many small towns. 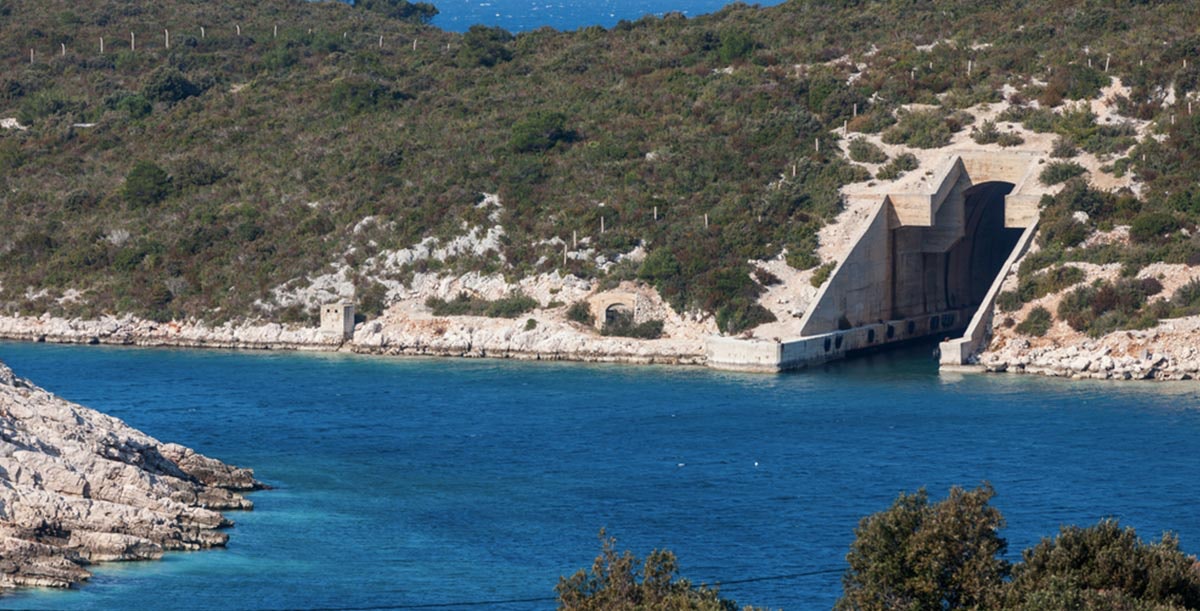 Military tunnel on the island of Vis

Sail around the eastern coast of the island of Vis. On the island of Budikovac (6.5 NM from the SE tip of Vis) there is a beautiful lagoon with crystal-clear waters. The depth at anchor here is 3–4 m. It is necessary to enter with caution and only anchor here when there is no wind or a light breeze. Budikovac is also famous for its exquisite red wines and excellent cuisine.

At a distance of 1 NM to the SW is the island of Ravnik. At the southern end of the bay, you’ll find the remarkable ZELENA ŠPILJA – The Green Cave.

This cave is equally worth a visit, whether for diving or simply to experience it from the comfort of your boat. The rays of the sun penetrate the cracks in the roof, resulting in extraordinary emerald-green light effects on the wall. The best time to marvel at these effects is around noon. Visiting the cave is not advised when the sirocco winds are blowing.

On the southern coast of Vis, you’ll find beautiful bays with ideal conditions for diving or snorkelling – including Ruda Bay and Travna Bay. The Bay of Stiniva is a long inlet that extends to a charming pebble beach with a small fishing hut only inhabited during high season. We recommend a visit during the morning or early evening when there are fewer tourists around.

From Rukavac Bay, it is 9 NM to the island of Biševo in a westerly direction. On the eastern coast of Biševo lies Balun Bay, where you’ll find MODRA ŠPILJA — The Blue Cave. 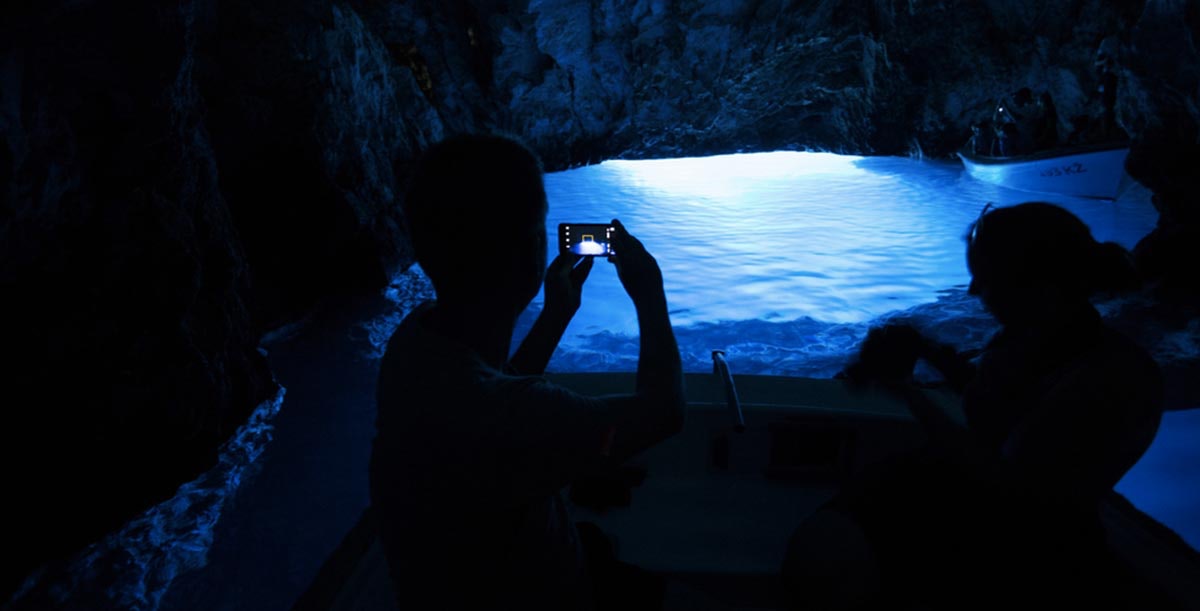 Blue cave on the island of Biševo

A truly astonishing cave, into which daylight enters only through an underwater tunnel. As a result, the light is an exquisite blue. After emerging from the water, the light plays on the walls, creating a spectacle of intense and ever-changing shades of blue.

You can reach the cave through the underwater tunnel. However, you will need to dive about 2 m below the surface of the water and then to swim underwater for about 4 m. It is more psychologically demanding to swim into the cave than out of it, as when you enter, you swim into the darkness.  When you swim out, however, you are met with a blueish glow. Basically, almost anyone can do it, although swimming is prohibited in the cave. To get around this, you'll have to arrive early in the morning, before supervising staff and other sailors arrive.

The cave can also be reached by boat through a narrow passage about 30 m long, which breaks back at the end and opens up into the Blue Cave.

It will cost about 50 to 70 Croatian Kuna per person to go by boat into the cave. The best time of the day to enjoy the lighting effects is between 10 and 11 am, but this is also when it is busiest.

It is not possible to anchor in front of the cave; once you reach the entrance to the cave, you must wait for the staff who do the tours.

If a sirocco wind is blowing, you will probably be all alone in the cave, even around noon when it is usually busy. The staff will not be attending the entrance and very few sailors will risk the trip during these conditions. You will have to be very careful when manoeuvring in front of the cave. Entrance is only possible during weaker sirocco winds, though even then there are risks attached to taking your boat into the cave. In strong sirocco winds, do not attempt to enter the cave.

Located just beyond Bishop’s Cape in the southwest of Biševo (towards the Bay of Balun) you will find another cave – Medvidina Spilja. The cave was once inhabited by Mediterranean seals (specifically the Croatian monk seal). Access to the cave is via a reasonably wide entrance; the cave within is about 160 m long, though its length is gradually decreasing. The cave has both underwater and above-ground parts; the low, narrow end of the cave opens up onto a small beach. 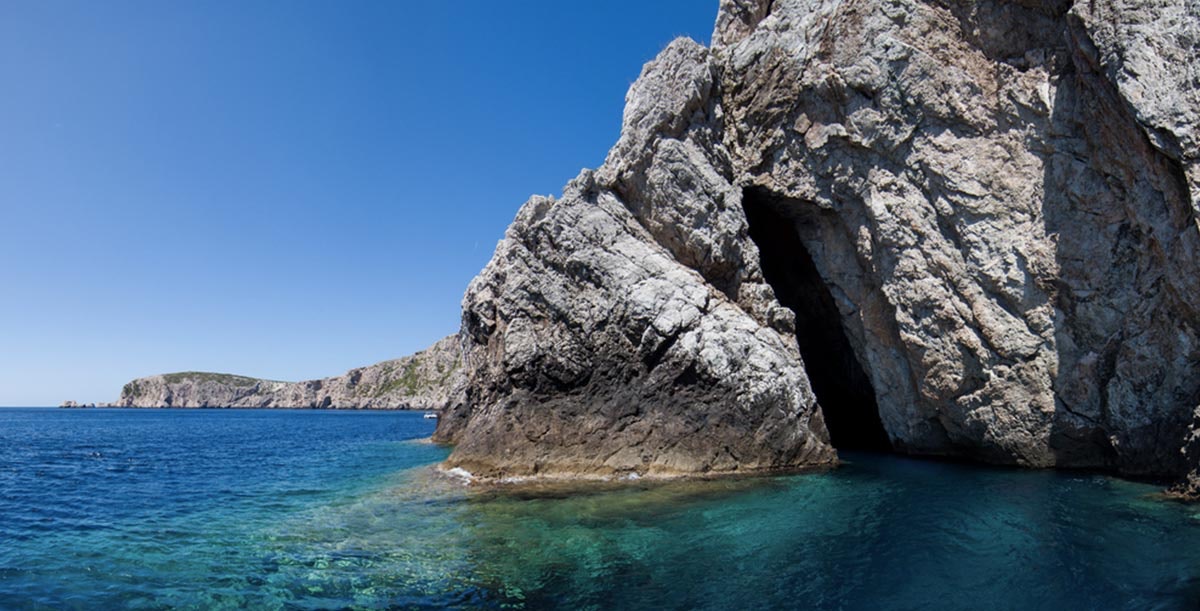 Where to sail next? It all depends on the wind...

Where next all depends on how the winds are. If a sirocco wind is blowing, option A applies; if instead you encounter a bora wind, choose option B. We will of course outline both routes in detail.

Route A — when the Sirocco blows

During sirocco winds, it is best to sail along the northern coast, along which you can visit the bay of Oključna or Gradac. In the afternoon, make the crossing to the island of Šolta. You’ll find the bay of Tatinja which lies in the middle of the southern coast of Šolta — from Komiža it is 24 NM. There are excellent conditions for snorkelling here.

YACHTING.COM TIP: If you like snorkelling, check out our article on the 7 most beautiful snorkelling spots in Croatia. We'll show you breathtaking underwater caves, sunken wrecks and give you tips on where to find the most colourful fish.

Šolta is a quiet island unspoilt by tourism, with an abundance of picturesque bays and a pleasant Mediterranean atmosphere. 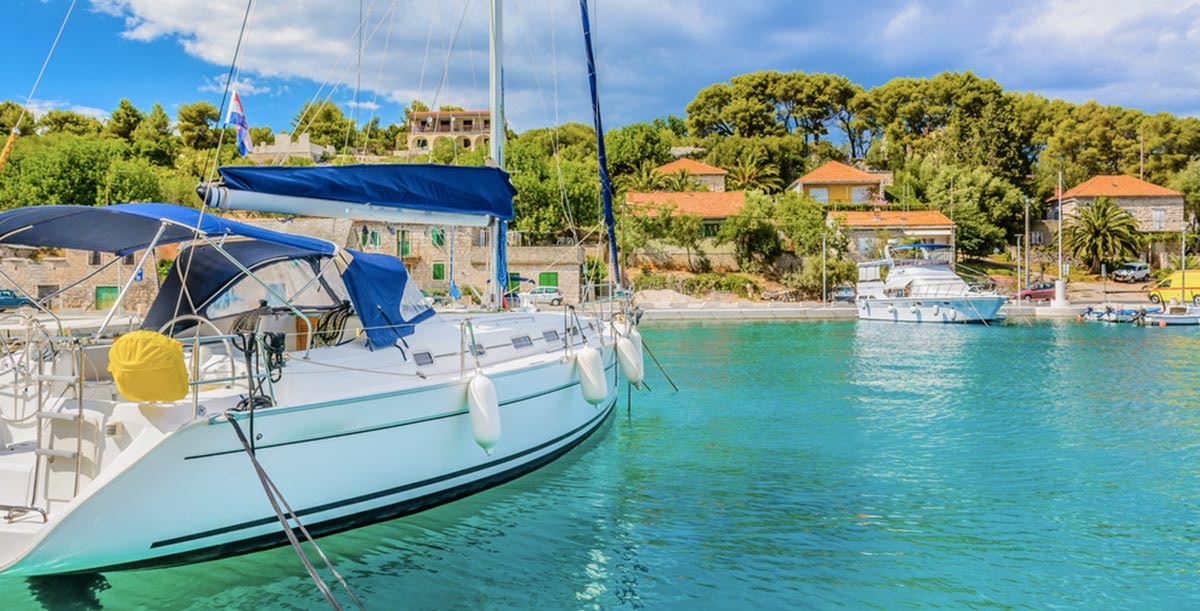 Roagac on the island of Šolta

In the bay of Šešula, immediately south of Maslinica, you will find an excellent place to moor — and also to swim. Anchoring is possible at several restaurants by way of floating piers.

3 NM northwest is the island of Veli Drvenik, on the eastern side of which you will find the small isle of Krknjaš, where you can swim in beautiful turquoise waters.

On Friday, sail 10 NM SE to the Bay of Grohote on Šolta and then immediately to the east, to the bay of Nečujam. In the evening, you can set sail back to Split (9.5 NM). 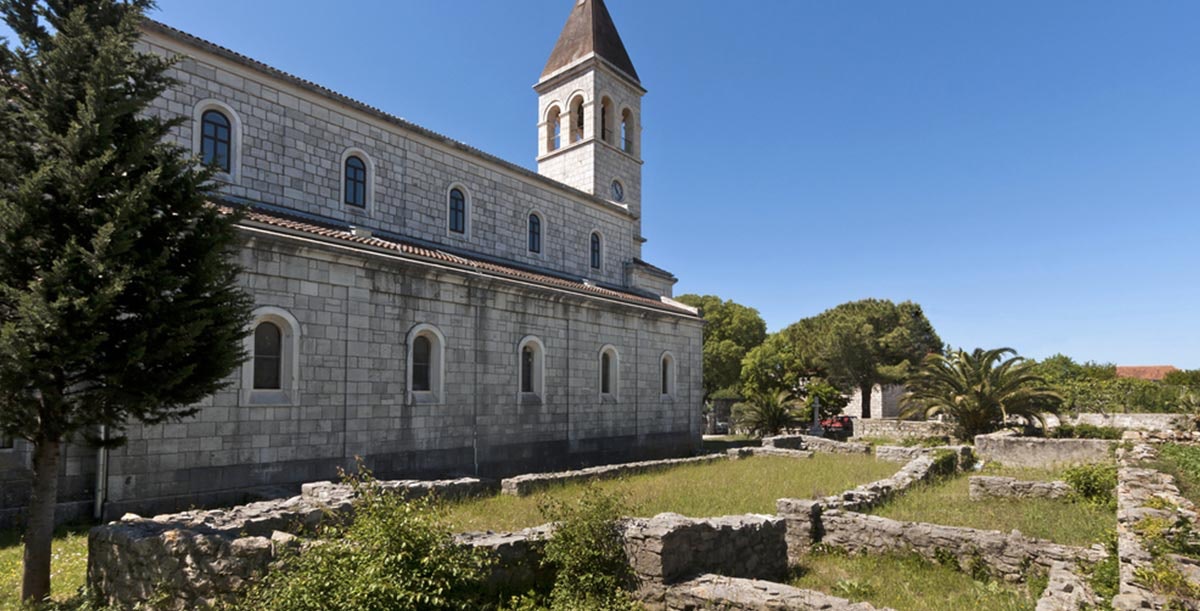 Take advantage of your time on Šolta to explore the inland village of Grohote. You’ll discover its beautiful ancient stone houses set among winding lanes.

Route B — when the Bora blows

Wednesday — great wine on the fragrant island of Hvar

During the Bora, we recommend that you sail along the southern coast of Vis 32 NM in an easterly direction to the island of Ščedro. On the northern coast of the island is the bay of Lovišće where there are good mooring facilities, and you can swim or dine at one of the lovely restaurants.

On the way back from Ščedra, you will find the port of St. Nedelja in the south of Hvar; here you should visit the restaurant founded by the winemaker Zlatan (who sadly died in 2016). They have excellent wines from Hvar that you definitely have to try. The harbour has been somewhat damaged, so it is essential that you check the depth of the water. In the bays around the island of St. Klement, you’ll find ideal spots for swimming and diving. Just a few steps from the Palmižana marina, there are romantic restaurants with excellent cuisine.

Throughout the island of Hvar, you’ll be able to pick up on the scent of lavender as you explore the ancient towns and villages. The port of Hvar is one of the most charming in the region and is definitely worth a visit. The town has a number of noteworthy historical sights and the many restaurants and cosy patisseries offer ample opportunity for refreshment. Take a deep breath while you’re there – the sun and the salty air with notes of pine oil have famously medicinal effects. Also highly recommended are the local lavender oil, lavender honey, and various typical liqueurs. 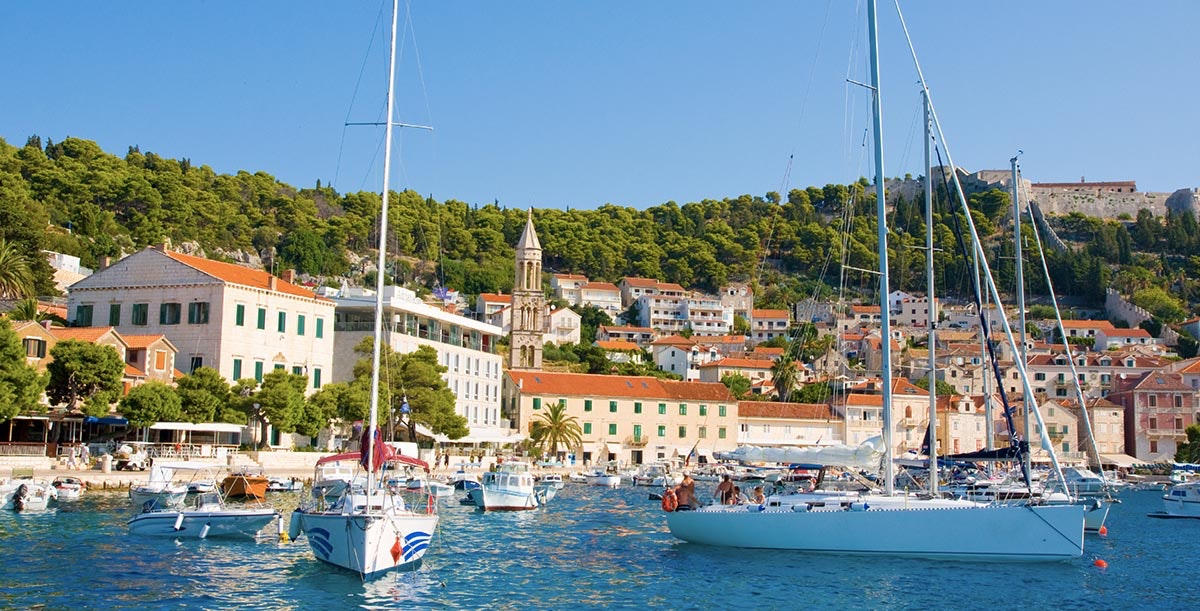 Harbour on the island of Hvar

Sail around the western tip of the island of Hvar and then ENE towards the southern coast of the island of Brač (17 NM), where you will find the port of Bol. In Bol, there is a famous and very popular beach, Zlatni rat. Its shape changes according to the currents of the sea and the direction of the wind. Don’t forget to try the local red wine, Bolský plavac.

The most beautiful monument on the island of Bol is undoubtedly the Dominican Monastery (dominikanski samostan). It lies on the eastern side of Cape Glavica. There is a valuable collection of artworks, the most interesting of which is a painting of the Virgin Mary with Jesus — it is said to have been painted by Tintoretto, a prominent painter of the late Italian Renaissance. On Bol, you can also visit archaeological excavations from the Roman period — including the remains of a Roman villa and a piscina (an artificial reservoir then used for swimming or as a fishing pond). 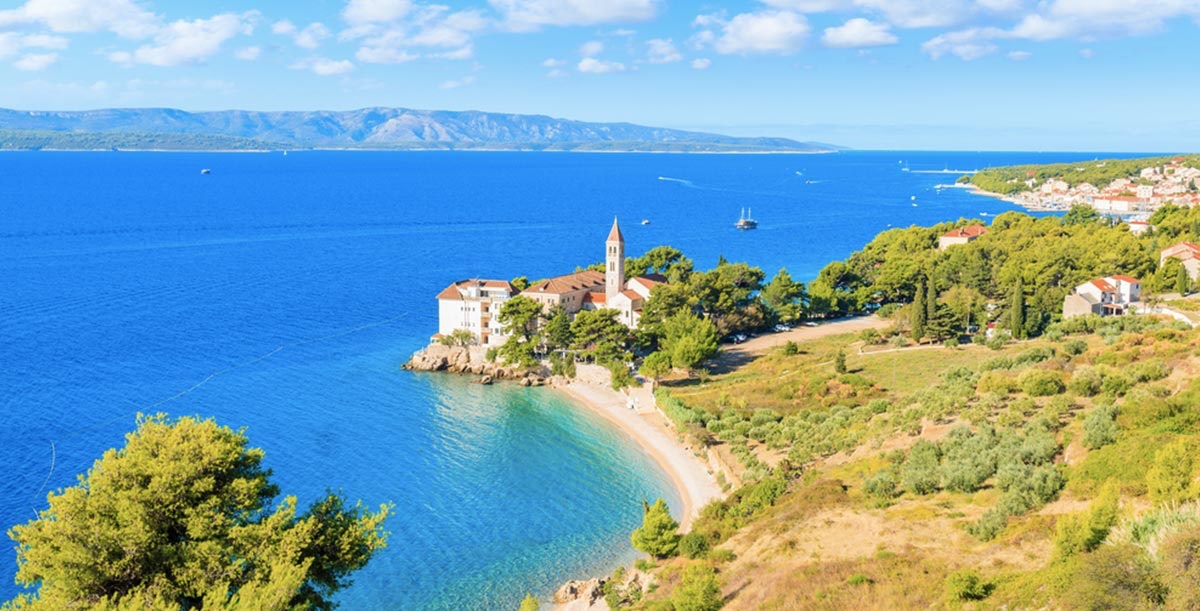 Friday — from bay to bay

On Friday, sail from Bol to the west and around the bays of Smrka, Maslinova, Lučice and Osibova. These are all wonderful spots for bathing and diving.

A couple of final tips

The spirit of ancient fishing traditions lives on in Veli Varoš, one of the city’s oldest districts. Have a beer at the Matejuška harbour and soak up the magical atmosphere.