7 most beautiful snorkelling spots in Croatia

Underwater caves, sunken wrecks and a multitude of colourful fish and animals... Join us as we explore Croatia's most beautiful snorkelling spots

Croatia will capture the heart of all who love the underwater world. It may not be as colourful as the Caribbean, but it is home to numerous shipwrecks, stunning underwater caves and an abundance of marine life, particularly in the natural parks where fishing is prohibited. So let’s dive in and explore the region together. 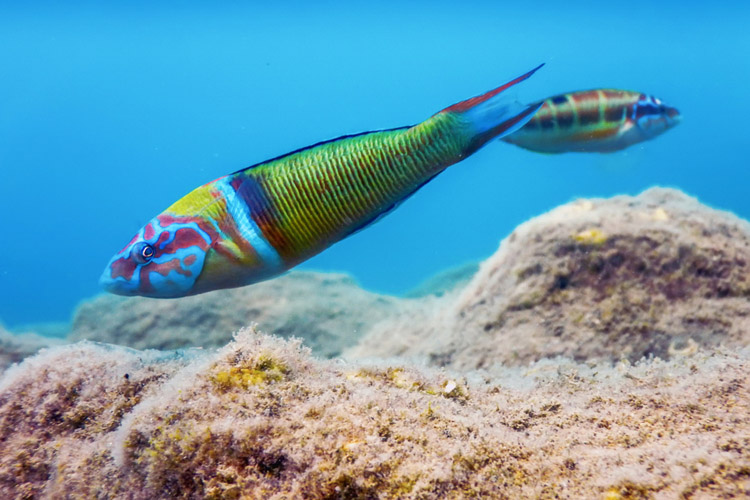 The ornate wrasse (thalassoma pavo) is a classic diving companion

This stunning promontory lies at the southernmost tip of Istria and is surrounded by a system of underwater caves that are home to rare Mediterranean seals. The crystal-clear waters feel like a giant aquarium, abundant in fish and animals. However, we recommend getting there early in the morning, before the tourists from the mainland and the enthusiastic sailors arrive. 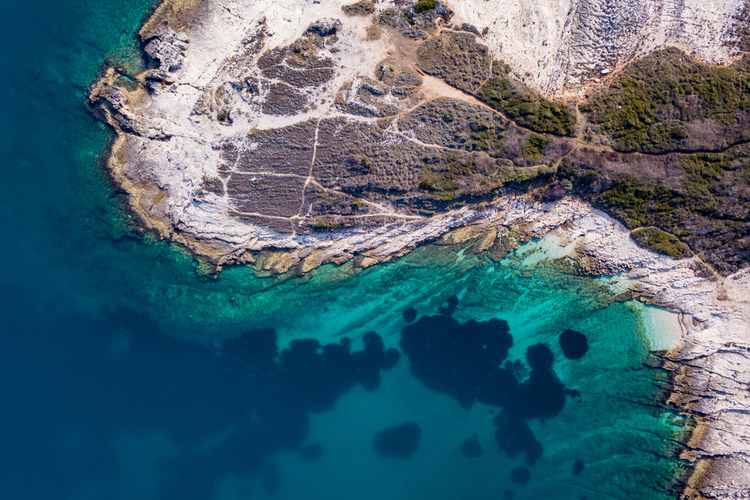 The crystal-clear sea near Cape Kamenjak is ideal for snorkelling

Dugi Otok is a diving paradise for those who love shipwrecks, caves, and crystal-clear coves. So let's dive in and take a look at the shipwrecks here, it’s well worth it. 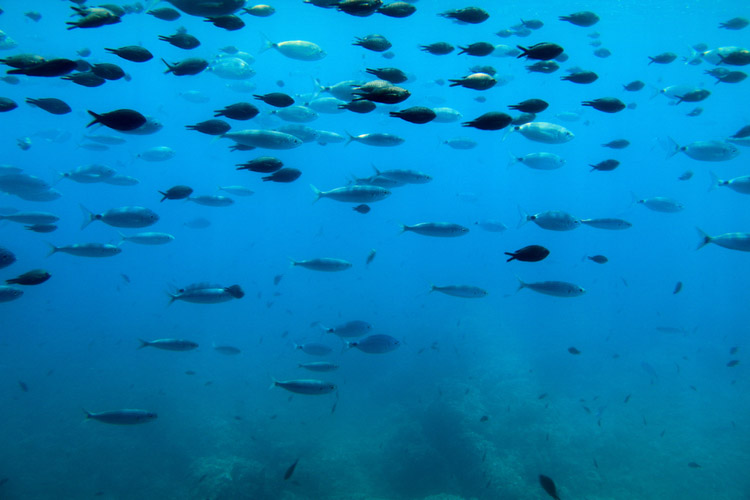 The wreck of the ship Michele — Vele Lagne

Near the islands of Mali and Veli Lagan, north of the Veli Rat Lighthouse, a beautiful wreck rests close on the shallow seafloor. It's the wreckage of the German ship Michele (formerly Osterdeich), which sank in a storm in 1983. Many different varieties of fish and even coral can now be found there. The ship is 76 metres long and 10 metres wide.

The Michele wreck lies just below the surface

A guaranteed amazing experience for all. Drop anchor near the wreck and swim out towards it. We recommend going early in the morning, when the sea is normally calmer, however, currents can be a problem. As the wreck is disintegrating more and more each year and disappearing beneath the surface, you should head there as soon as you can. 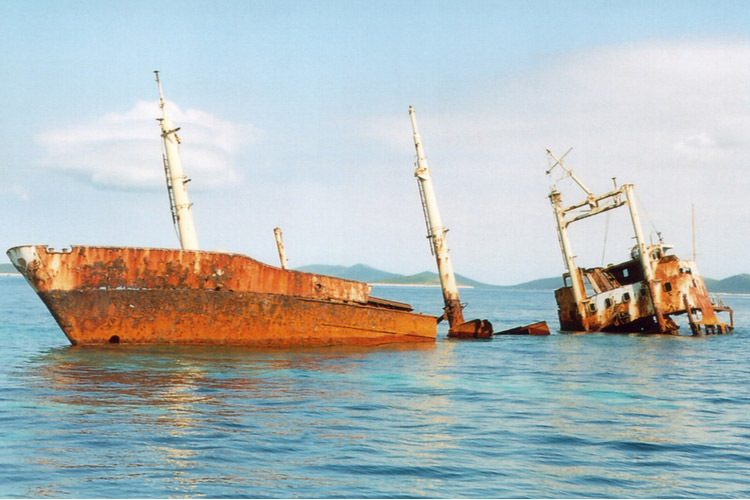 YACHTING.COM TIP: Be careful when snorkelling. If the wreck is rusty, you can easily snag yourself on it.  Don't take unnecessary risks and don't enter the more enclosed parts of the wreck without proper equipment.

Want more? On the west coast of Dugi Otok is the Brbiscica cave where the incoming rays of the sun turn the sea an amazing colour and you'll encounter a multitude of fish of all sizes. Telascica, a vast natural bay encircled by towering cliffs, is located to the south where you'll discover around 250 marine animals and 300 species of underwater plants. Fungi, crabs, red corals, and even octopus can be found there.

On the island of Mljet there are several popular spots — Veliko Jezero (Great Lake), Rikavica and the remarkable and mythical Odysseus Cave. Underwater life around the island is varied, you'll find octopus, scorpionfish as well as many small fish, crabs and anemones. And of course coral. We highly recommend the Odysseus Cave. 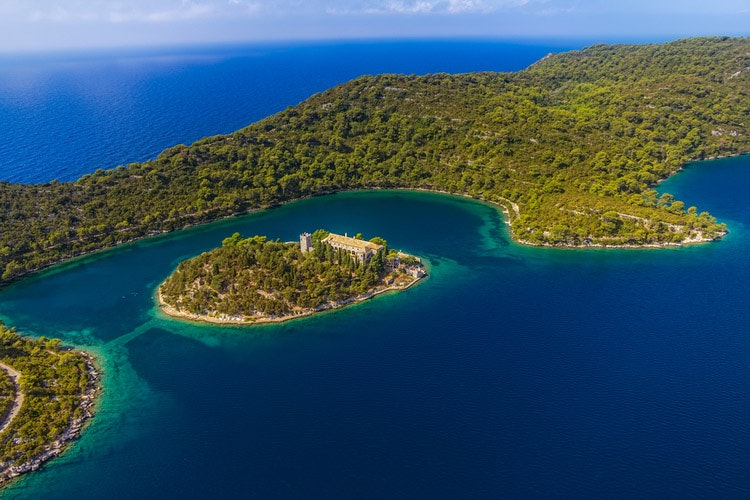 Underwater life around the island of Mljet is varied

You can find the cave on the south coast, about halfway down the island. The best time to snorkel there is between 12 am and 2 pm, when the sun creates the most beautiful light effects within the cave. You’ll also encounter a lot of fish — colourful wrasse, groupers and even scorpionfish.

From above, the cave looks like a deep and wide hole in the ground (it was created by the collapse of the cave ceiling and the locals also named it Jama). The bottom is flooded with water because it is connected to the sea by a natural tunnel. This tunnel through which you swim to the cave from the sea is about five metres wide and about twenty metres long. It is easy to swim and the distance between the sea level and the rocky ceiling is approximately 1.5 m at its lowest point (in higher waves and windy weather, sailing can be risky). 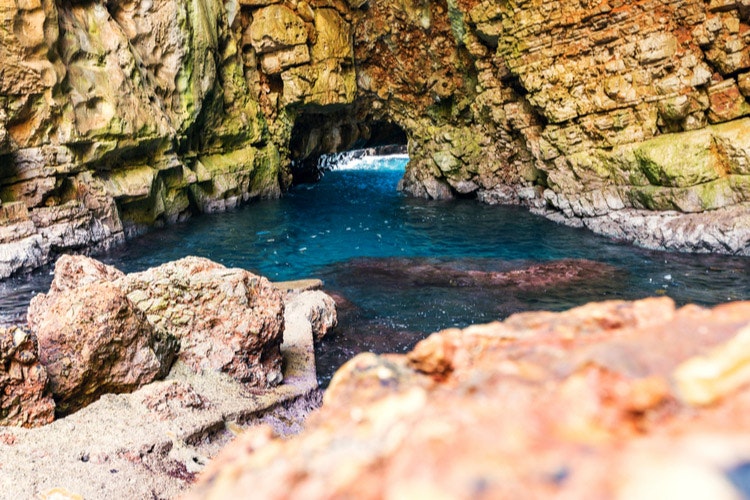 Why is it called the Odysseus Cave? According to Homer, it is here that Odysseus' ship was shipwrecked. Odysseus then swam to this cave, to this supposedly most beautiful island of all seas and oceans. The beautiful nymph, Calypso, the daughter of the giant Atlas, ruled here. She fell in love with Odysseus and unwilling to let him go, promised him immortality. Odysseus did not return her feelings and tried to get away. Eventually, Zeus himself had mercy on him, with the intercession of Athena, who ordered Calypso to release him. Odysseus then built a raft with her help and sailed out to sea:

"She gave him a goat skin full of black wine,
and another larger one of water;
she also gave him a wallet full of provisions,
and found him in much good meat.

Moreover, she made the wind fair and warm for him,
and gladly did Odysseus spread his sail before it,
while he sat and guided the raft skillfully by means of the rudder.
He never closed his eyes,
but kept them fixed on the Pleiads,
on late-setting Boötes, and on the Bear - which men also call the Wain,
and which turns round and round where it is, facing Orion,
and alone never dipping into the stream of Okeanos
- for Calypso had told him to keep this to his left.”
The Odyssey, Hommer

The “sailor” and the astronavigation expert sailed for eighteen days before seeing land. Then Poseidon broke his raft with his trident. But that's another story, at the end of the Odyssey, which brings fresh romance and a gruelling journey… 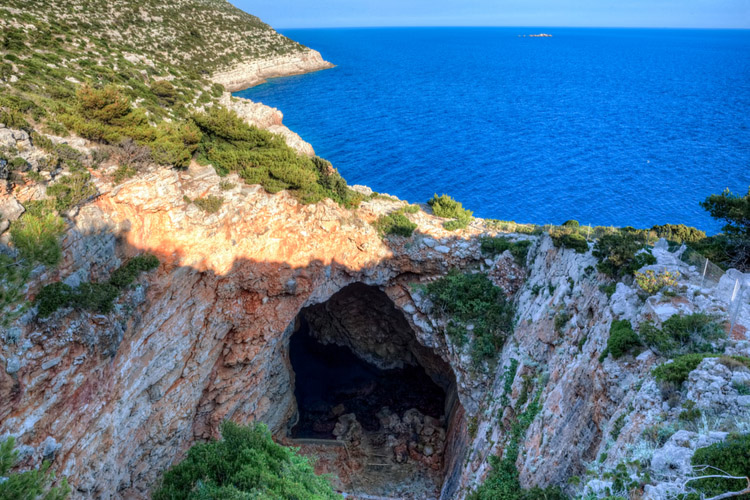 Odysseus Cave from the mainland

YACHTING.COM TIP: According to Homer's epic, the legendary Odysseus returned from the Trojan War to his native Ithaca after ten years. To this day scholars dispute whether this brave king and one of the most famous sailors actually ever existed. Join us in celebrating other famous sailors from myth, books and the big screen. Which is your favourite?

More information about sailing in Croatia:

Don’t miss the three most interesting caves around Vis: the Blue, Sea Bear and Green caves.

This is a truly amazing cave, where the only sunlight penetrates through an underwater tunnel. The light that emerges from the water, illuminates the walls with an intense and ever-changing blue, providing a fascinating spectacle.

You can enter the cave from the outside or through an underwater tunnel. However, it is necessary to dive about 2 m below the surface and swim about 4 m underwater. Almost anyone can do it. Unfortunately, swimming is forbidden in the cave. If you want to enjoy it, get there early in the morning — before the guides and other boats. If you come off-season, you can also enjoy the cave to yourself.

The cave can also be reached by boat through a narrow passage about 30 m long, which turns back at the end and opens into the Blue Cave. There is a fee to enter, but it is well worth it. The best light is between 10 am and 11 am, but this is the busiest time. You can't anchor in front of the cave and don't attempt sail here if there is a strong southerly wind. 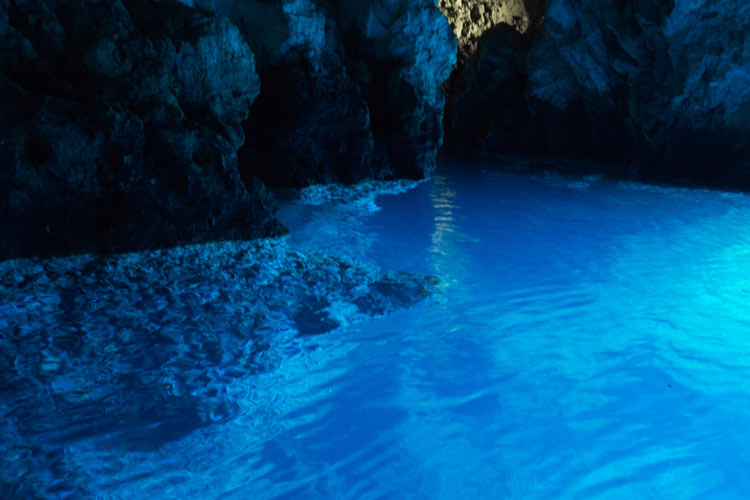 In the southwestern part of Bisevo, there is another cave behind the rocky outcrop of Cape Bishop towards Balun Bay — Medvidina Spilja (Sea Bear Cave). It is not inhabited by bears, but it was once inhabited by Mediterranean seals (or sea bears in Croatian). The entrance to the cave from the sea is quite wide, the space is 160 m long and gradually narrows. The cave sections are above and below sea level with the narrow low end of the cave leading to a small beach. 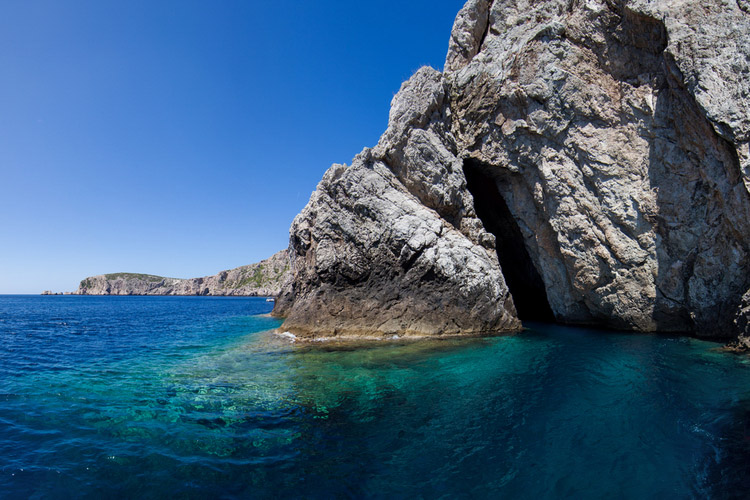 Entrance to the Bear Cave

Approximately 1 NM away is Ravnik Island. The bay at its southern end hides the remarkable Zelena špilja — the Green Cave.

The cave is beautiful when viewed from the deck of a boat and, of course, when diving. It is well worth a visit. The sun's rays penetrate the cave through cracks in the ceiling and emerald light effects cast upon the walls. The best light for exploring is around noon, but if the Jugo is blowing, it's best to postpone your visit.

The Pakleni (Paklinski) Islands comprise of twenty-one islands, islets and reefs, with many bays to anchor at. For example, there is attractive snorkelling at Cape Stambedar (you can anchor in the cove behind the cape), where there is a beautiful cliff wall that descends 50 metres. Even just below the surface, the wall is covered in various interesting species of flora and fauna, encircled by beautiful fish. 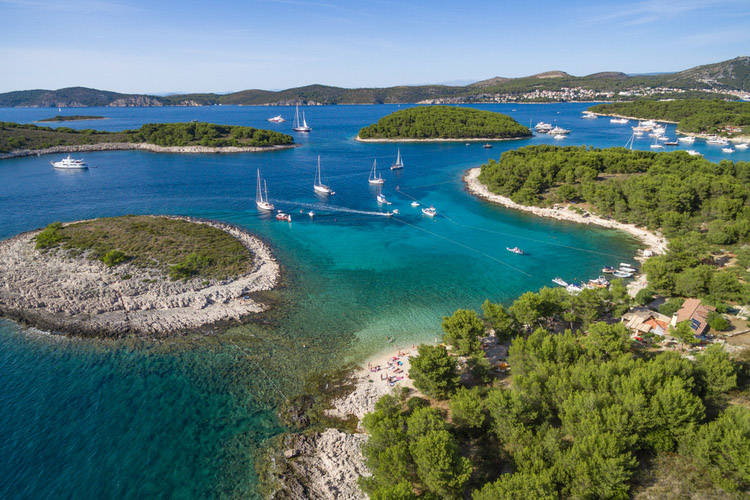 The Pakleni Islands comprise of 21 islands, islets and reefs

Brijuni has been a national park since 1983 and fishing around the archipelago is limited. As a result, the underwater flora and fauna are much richer than elsewhere. The seabed is full of sea urchins, crustaceans, molluscs, sponges and fish. If you're lucky, you'll even get to see dolphins. 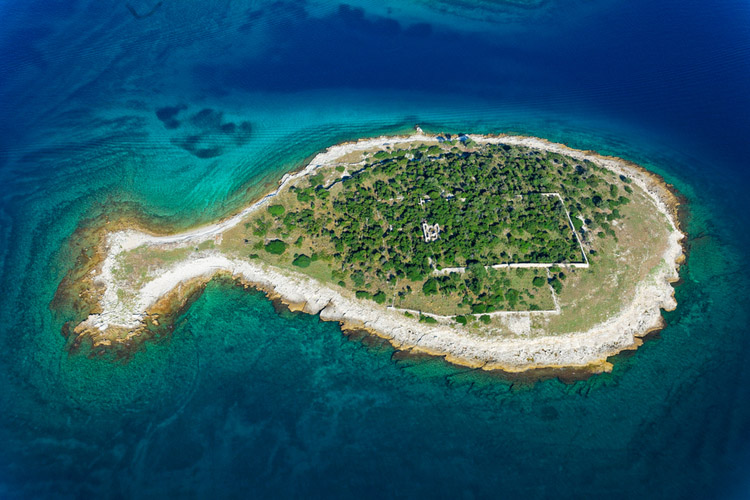 One of the islands of the Brijuni National Park

Countless fish roam the waters around the island and there are underwater caves and small sea lakes. This beautiful spot is right below the lighthouse.

If you're interested in lighthouses, take a look at our article 15 most beautiful lighthouses you must visit. Several beautiful examples can be found in Croatia.

On the island of Sušac you can encounter octopus

YACHTING.COM TIP: A mask, especially a new one, must be degreased to prevent it from fogging up. Fogging is caused by grease that sticks to the mask during production. Clean with dishwashing liquid, let it stand overnight and repeat if necessary. 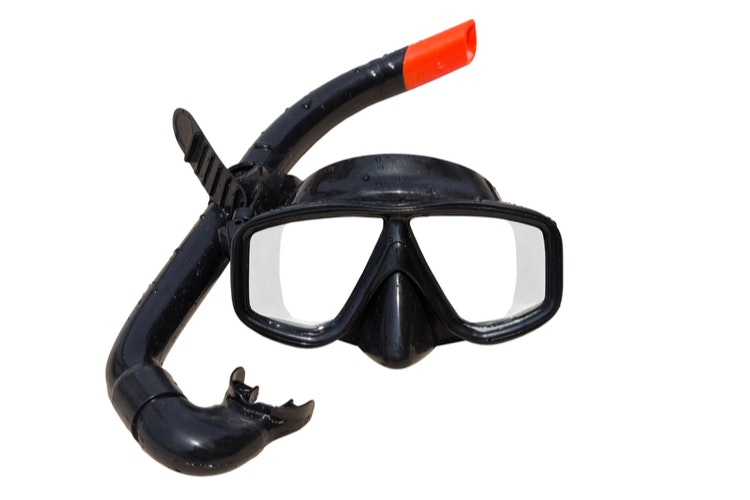 Have we made it easier for you to decide where to head next year? Imagine being aboard a boat, in the warm sun and the air shimmering in the heat. You'll find hundreds of wonderful snorkelling spots with our great range of boats.

I'll find you the best boat for exploring the underwater world.