Their adventures have fascinated us since childhood and it is perhaps these that sparked our own desire to sail the seas. Here are the 10 most famous sailors, captains and pirates from myths, books and film.

We followed their adventures at sea with bated breath — some made us laugh, some filled us with terror us and we rooted for others that they'd make it safely back to their home port. Which of the following fictional sailors won your heart? 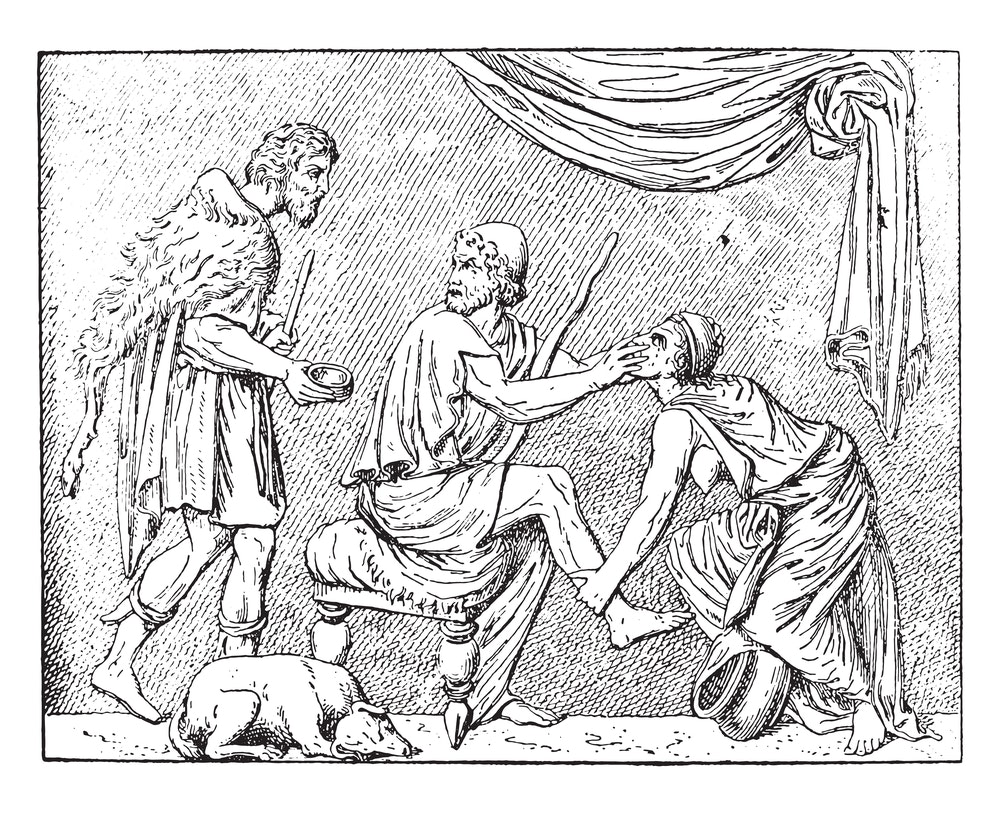 This legendary Greek hero is the first sailor ever to appear in a famous literary work: Homer's famous epic poem The Odyssey. To this day, his voyage home is synonymous with all difficult return journeys. Odysseus was king of Ithaca, a small island in the Ionian Sea, where he lived with his wife Penelope. After defeating Troy with the rest of the Greeks, he set out with his ships on a journey back to his homeland. But these plans were thwarted by Poseidon, the god of the sea himself, making Odysseus' return fraught with danger and taking ten long years. Eventually, after several shipwrecks and losing his crew, he made it home disguised as a beggar. Homer's Odyssey is said to be a mixture of both real and fictional characters. Historians believe that Homer was not just a storyteller, but that his work reflected real events and people that existed in ancient Greece. A few years ago, archaeologists discovered the remains of an 8th century BC royal palace at Ithaca, supporting the theory that Odysseus may have been a real historical figure... 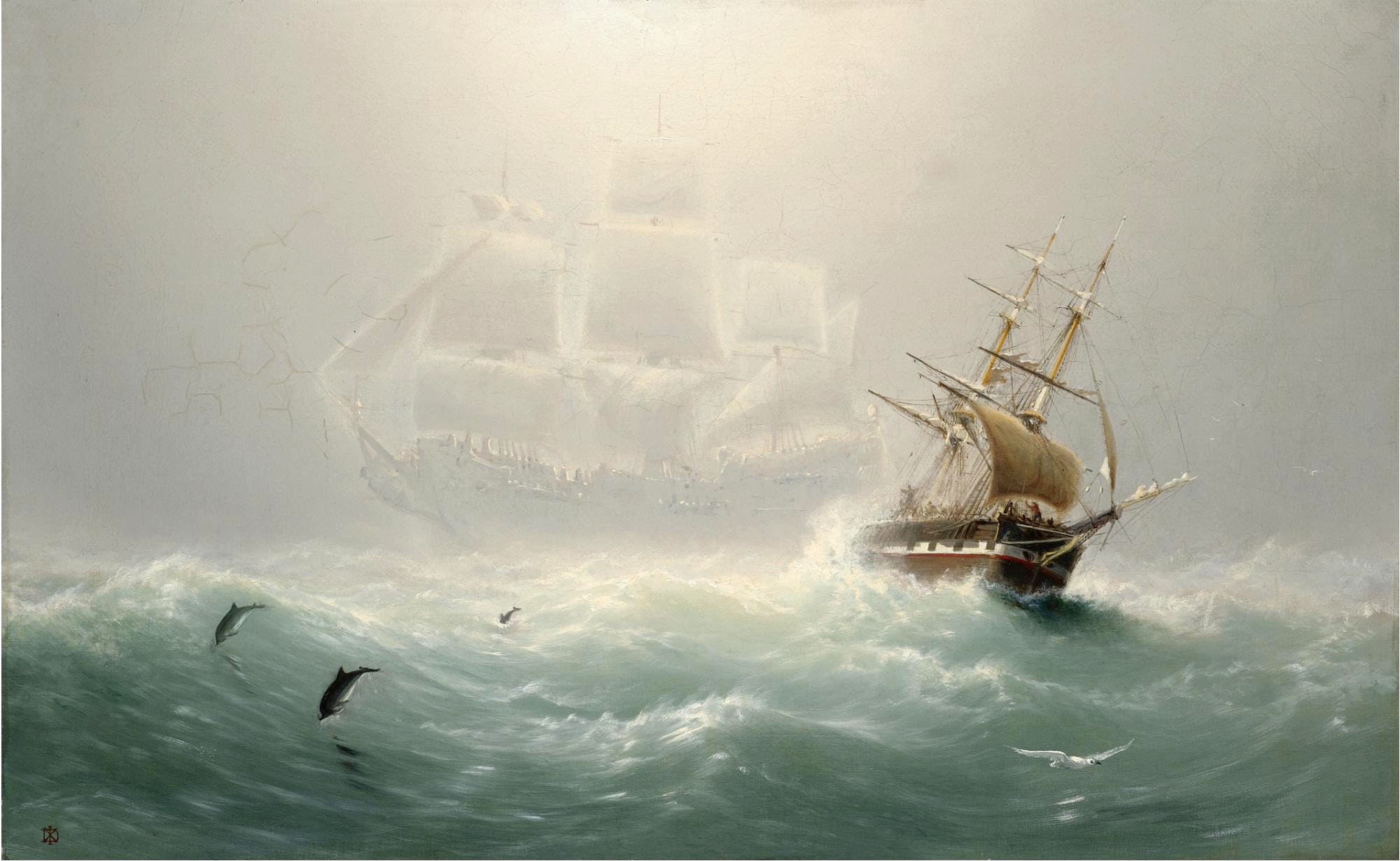 "A strange red light as of a phantom ship all aglow, in the midst of which light the masts, spars, and sails of a brig 200 yards distant stood out in strong relief as she came up on the port bow," described the royal report of King George V during a voyage through the Bass Strait in 1881. This was one of the numerous sightings of the ship (or its captain) nicknamed The Flying Dutchman. Such a sighting was said to bring misfortune and according to some, meant the crew were in danger of death or even foretold a shipwreck or fire. The very sight of the ship itself was said to instil fear - instead of sails, it had shreds of fog and glowed in a ghostly light. But where did it come from and who was its captain? One version claims it was captained by Barend Fockesz, who had made a deal with the devil to make the journey faster. According to another, it was Captain Van der Decken, who, angered by the winds preventing him from rounding the Cape of Good Hope, said he would do so even if it took forever. It is this version that also served Richard Wagner in his opera The Flying Dutchman, where  the captain is condemned to sail the sea for eternity until he finds a woman who loves him enough to promise him loyalty until death. Although there are many variations on the tale, what is certain is that the mysterious ship both fascinated and terrified sailors from the 17th right up until the 20th century — there were even sightings of The Flying Dutchman in 1939 and 1942. 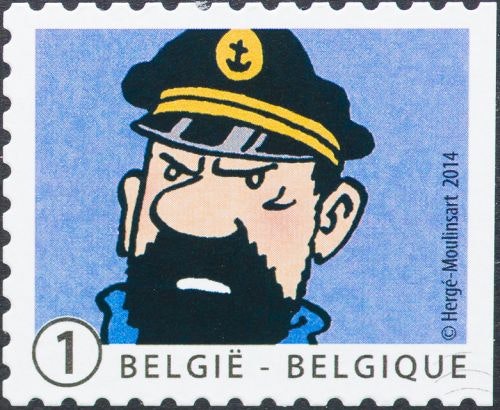 Bashi-bazouks! Bandits! Autocrats! Nincompoop! Miserable slugs! Sea gherkin! Visigoths! Everyone loves Captain Haddock from the Tintin comics for his exquisite insults that manage not to use even a single swear word. Despite his initial insatiable thirst for whiskey and rum, he later rises to become president of the Society of Sober Sailors (but even then, doesn't give up the occasional Loch Lomond whisky). His sarcasm and irony remain the perfect counterbalance to the sometimes overpolite Tintin. 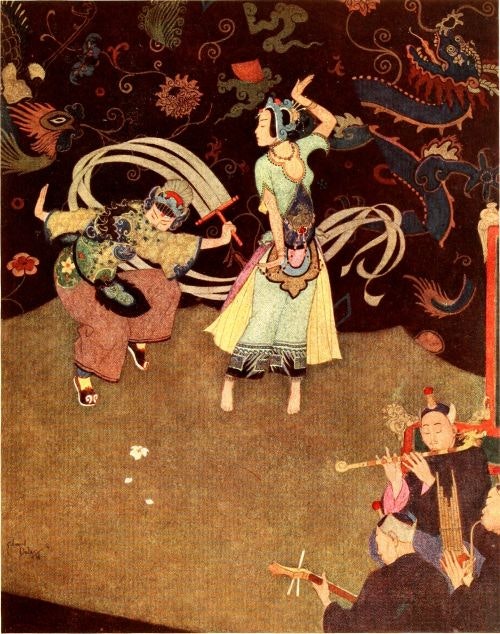 One day a poor porter rests outside the house of a rich merchant in Baghdad, complaining of an unjust world that provides comfort to the rich but mere drudgery to him. When the owner of the house overhears, he is called in, leading to the discovery that they are both called Sinbad.  The merchant begins to tell him the riveting tales of the seven voyages that had led to his wealth. And truly riveting it is: Sinbad the sailor battled monsters, encountered supernatural phenomena, and experienced all sorts of twists and turns within magical realms — just as we all expect from a tale of One Thousand and One Nights. Sinbad also entertains us with his pure love of adventure: despite occasionally pondering why he hadn't stay in the safety of home, as soon as his difficulties are overcome, he sets sail on his next voyage... just like a true sailor should. 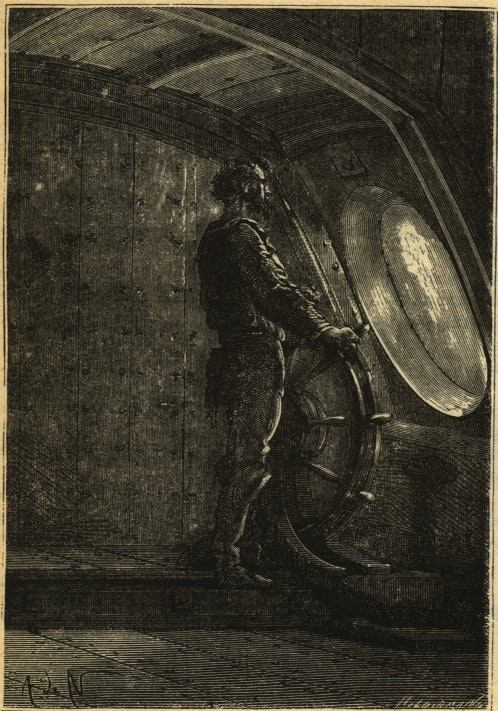 The year is 1866 and there have been numerous sightings of a mysterious sea monster attacking ships. A frigate is sent out to find and destroy it, but is sunk when it tries to pursue the creature. Professor Arronax, his servant Conseil and the frigate's harpooner Ned Land survive by climbing onto the back of the "monster", which turns out to be the futuristic submarine Nautilus. Hauled inside, they meet the vessel's mysterious constructor and commander Captain Nemo. This is Jules Verne's classic Twenty Thousand Leagues Under the Sea, a book that, perhaps, we have all at some point devoured. Later on in the adventure, the voyagers see the remains of Atlantis, walk on the seabed in a spacesuit, and reach the South Pole. But it is not until Verne's next book, The Mysterious Island, that readers discover the true identity of the mysterious Captain Nemo. On his deathbed, Nemo confesses that he is the Indian prince Dakkar, who, after crushing the rebellion he led, had built the submarine Nautilus with his most loyal followers. Adopting the name Nemo (or "Nobody"), he had then declared war on Earth's tyrants,: colonial England. 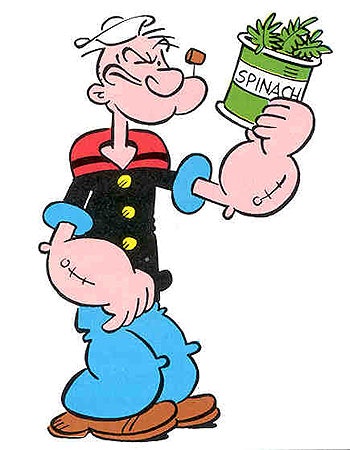 At first glance, he may not look like a muscleman, but he can definitely find the strength when required. All he needs is a can of spinach. Although it's true that we don't remember much of the plot of the comic strip or cartoon Popeye the Sailor, we do remember that we should eat our spinach. And we always found Popeye's love interest Olive Oyl and his rival Bluto particularly entertaining. 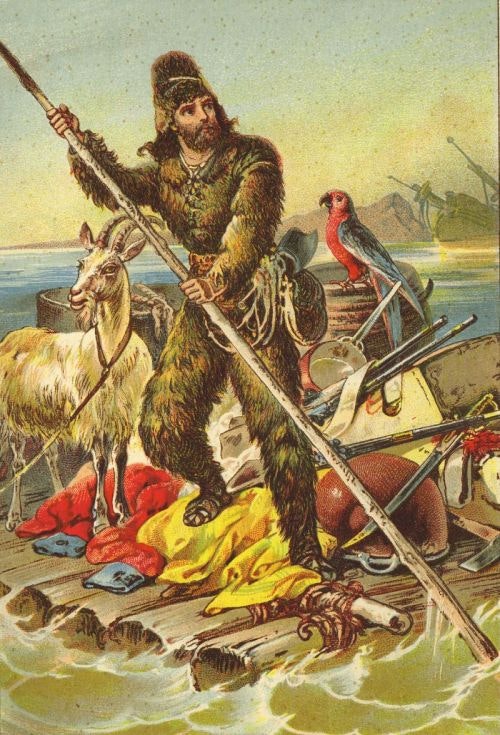 A man shipwrecked and marooned on an island, tilling a field, salvaging things from wrecked ships and attempting to "civilize" the rescued "savage" Friday — that's what most of us associate with Robinson Crusoe. But we should never forget the first part of the story, where Daniel Defoe presents Robinson as a lover of the sea and adventure, who embarks on his first voyage against his parents' wishes and manages to break free from slavery. Defoe's suspected inspiration was the real-life story of Alexander Selkirk, a Scottish sailor, who, after a disagreement with his captain, was asked to be put ashore on an uninhabited island in the early 18th century where he spent 4 solitary years. 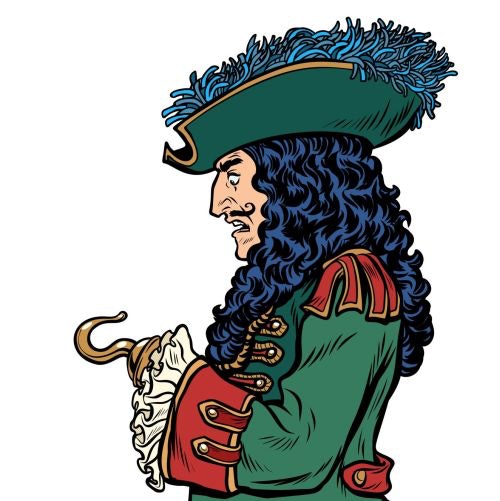 Tall, with long black hair and a beard, wearing a wide-brimmed hat... and, of course, with a hook for a hand. Captain Hook, the antagonist in the story of Peter Pan story, is mainly remembered for his prosthesis. In fact, at one time children always drew pirates with a hook for a hand... that is until Johnny Depp's Jack Sparrow changed all that. 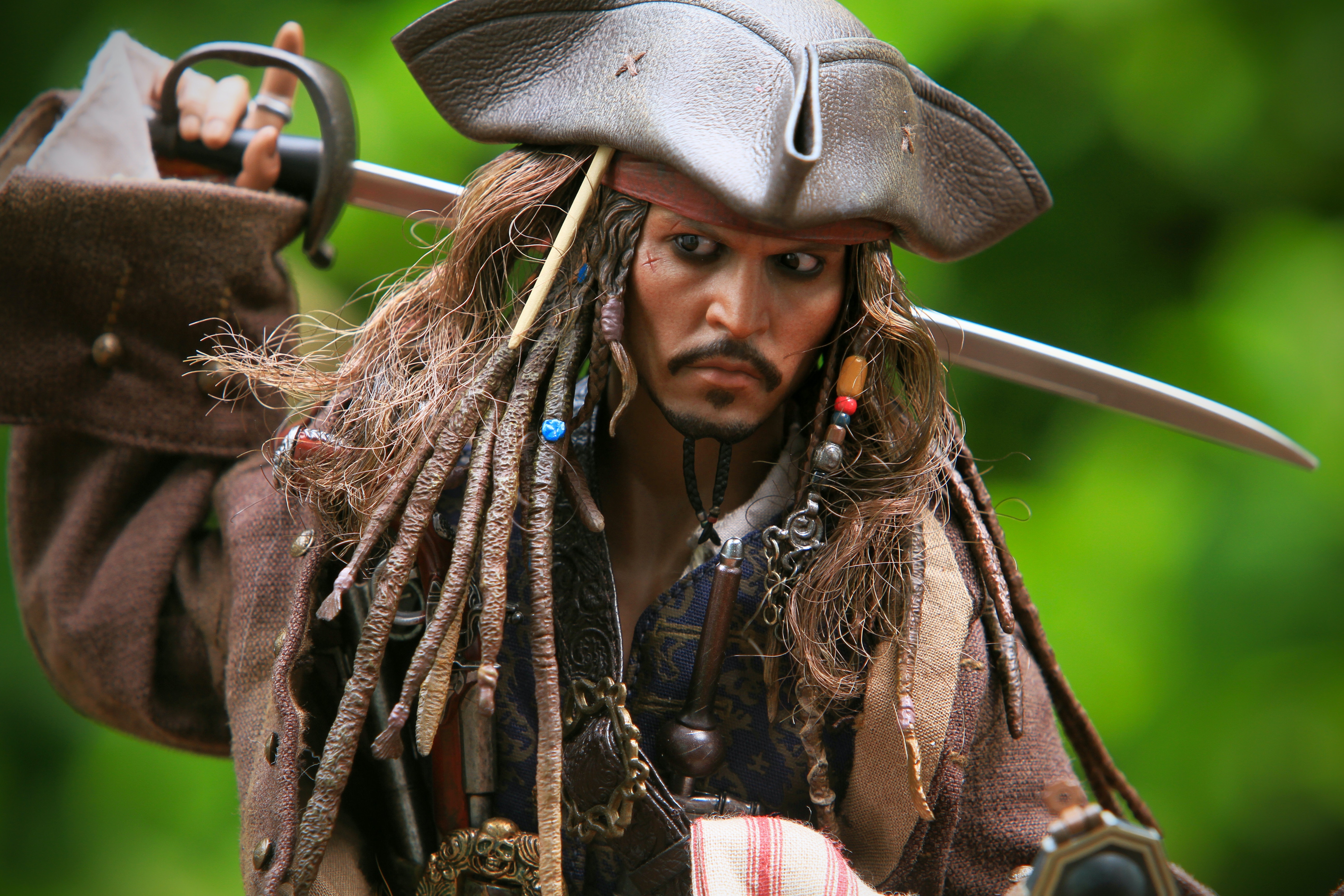 Captain of the Black Pearl and hero of five Pirates of the Caribbean films, he is undoubtedly the most popular fictional sailor in the world today. He's funny, intelligent, entertaining, quirky to the point of madness, but without a doubt, charismatic. Both the worst and the best pirate, he relies on his wits rather than brute force and on escape, when necessary. This is a pirate who loves not only rum but William Shakespeare. 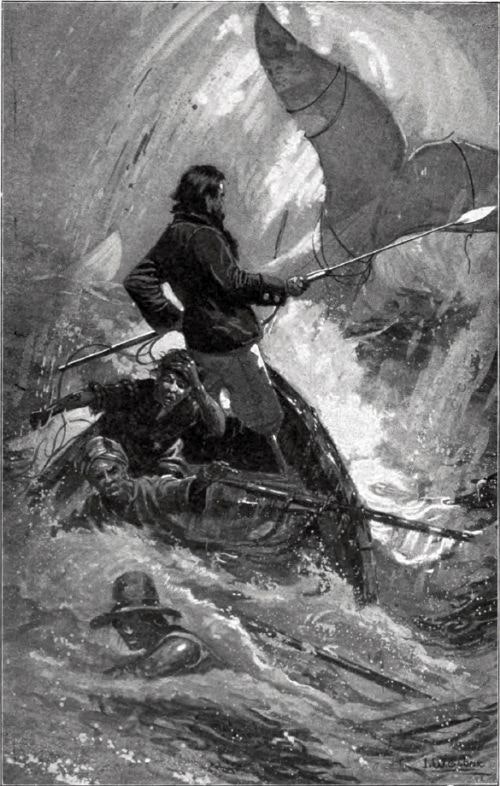 Captain Ahab is obsessed with revenge after a giant white sperm whale, nicknamed Moby Dick, deprived him of his leg. Despite bad weather, storms, and the whole endeavour's economic nonsense, he forces his crew to help him. But this ultimately leads to his downfall: Ahab is pulled underwater by a harpoon during a fight with the whale, the ship is destroyed and the rest of the crew dies. Herman Melville's book is not only about obsession and revenge, but also a story about the relationship between man and nature, and our relationship to God, fate and the power of the sea.

I can help you make your dream sailing vacation a reality. Just give me a call.