A sailing holiday with kids? There’s nothing simpler or more fun. We’ve brought you a recommendation for a sailing trip in Croatia with a detailed day-by-day route plan and suggestions for mooring and recreation.
Published by Yachting.com - 08/18/2022

A sailing holiday with kids? There’s nothing simpler or more fun. We’ve brought you a recommendation for a sailing trip in Croatia with a detailed day-by-day route plan and mooring suggestions. The route is tailor-made for children, so there are plenty of opportunities to stop along the way. The daily cruising time is shorter, to prevent the kids getting bored. There are lots of interesting places to explore in the vicinity, as well as swim and snorkel. 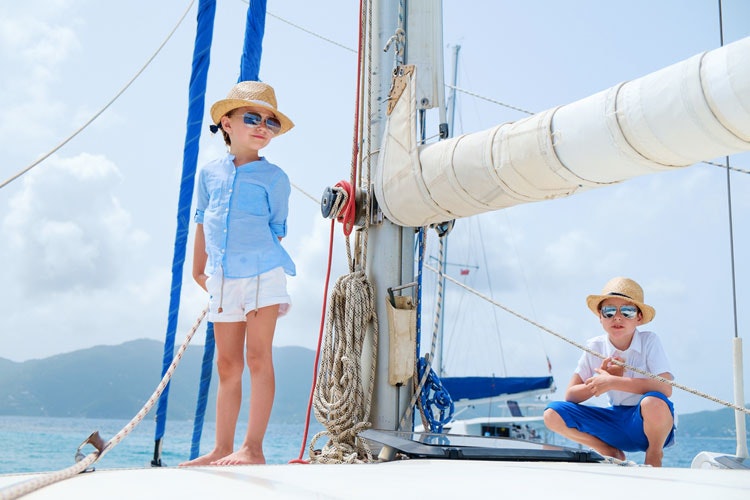 We’ll depart from Biograd na Moru, although you can take similar routes which leave from Sukosan or Zadar.

After boarding in Biograd na Moru and completing the yacht handover you can spend the night in the local marina. If you and your kids want to set off on your sailing adventure right away, however, then raise the sails and sail 2 Nm to the island of Pašman and into the pretty bay of Zaklopica. There’s a pleasant restaurant in the bay and clean water which will lure you in for your first swim.

If you want to get stuck into a longer cruise or stick around a while longer, you can sail around the most famous heart-shaped island, Galesnjak, which lies north of Pašman. 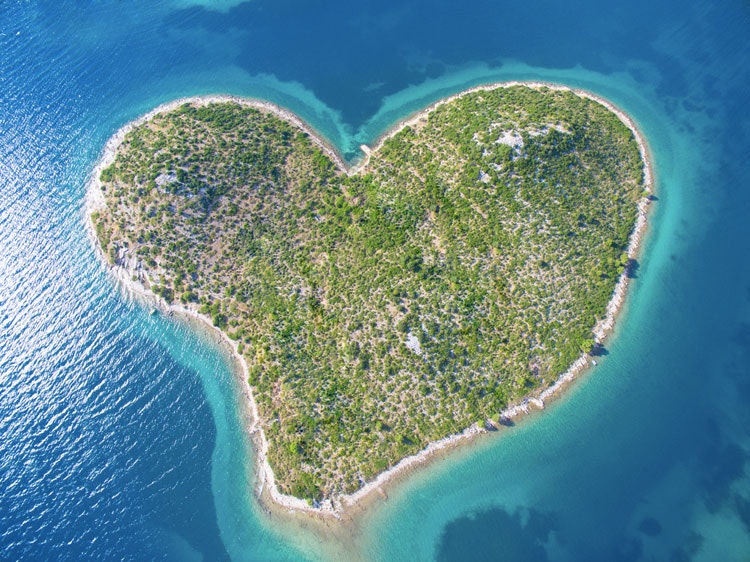 You’ll depart for the island of Vrgada in the morning. It’s about 2 Nm to the island’s sandy beaches. You can use the mooring buoys in the north-east of the island. If it’s busy, we recommend dropping anchor in the western bay. There’s a picturesque beach with warm, shallow water, which is ideal for small children. There’s also a restaurant on the beach, which parents can enjoy.

The north-eastern part of the island is forested and in Luka harbour you’ll find the only settlement on the island. It’s surrounded by islets, where local farmers freely graze sheep. The pre-Romanesque village church of St. Andrew (Sveti Andrija) dating from the 9th century still remains.

Later in the afternoon you’ll make the crossing to Kornati. You’ll reach the island of Ravni Žakan, 9 Nm away. If it’s full here, you can continue another 4.5 Nm to the marina on Piškera Island.

Buy tickets for Kornati National Park in advance online, you’ll save 50 % of the price. If you moor in Piškera Marina, you’ll get a one-day ticket to Kornati absolutely free. That’s another good reason to stay in this beautiful marina for a night. The ticket will be valid for the following 24 hours. 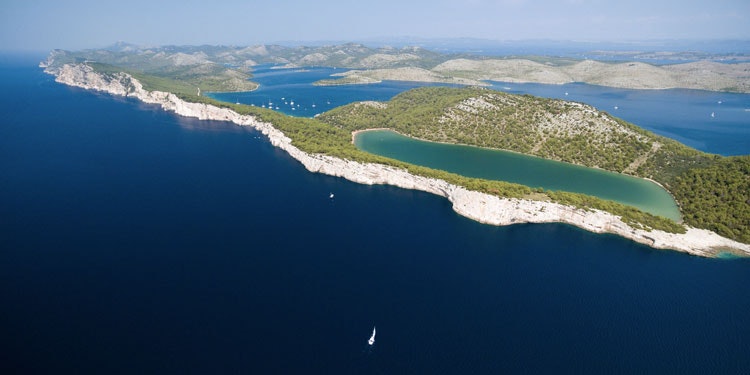 In the morning, sail 6 Nm to the island of Levrnaka. There’s the beautiful sandy bay of Lojena in the south-west. It’s best to visit this beach in the morning until 10 am or in the afternoon after 5 pm when there are fewer people. Lots of boats with tourist arrive throughout the day and it’s always full.

You can also stop in the deep bay in the northern part of the island, where you can usually find mooring buoys (although they’re not always installed). There are concrete blocks on the seabed, so you can tie a line to one if you dive down 10 metres. Or you can drop anchor.

On foot, it’s only a few minutes’ walk across an isthmus which runs along a pleasant restaurant until you hit the sandy beach. In the evening, make the crossing to the port of Sali on Dugi Otok 10 Nm away.

Dugi Otok is an island full of colours and contrasts. The coast facing open sea is rugged. In the south of the island there are abandoned coves and fascinating steep cliffs. If you want to stick around on the island, you can visit Mir Bay in Telašćica Nature Park and swim in the salt lake. The lake water is saltier and warmer than the sea and is relatively shallow, so it’s great for swimming with kids.

Telašćica is also a nature park and you’ll need to buy a ticket to enter. Again, it’s cheaper to buy it online. If you’re planning to spend 3 days on Kornati and in Telašćica, then it’s worth getting a joint ticket to both parks. 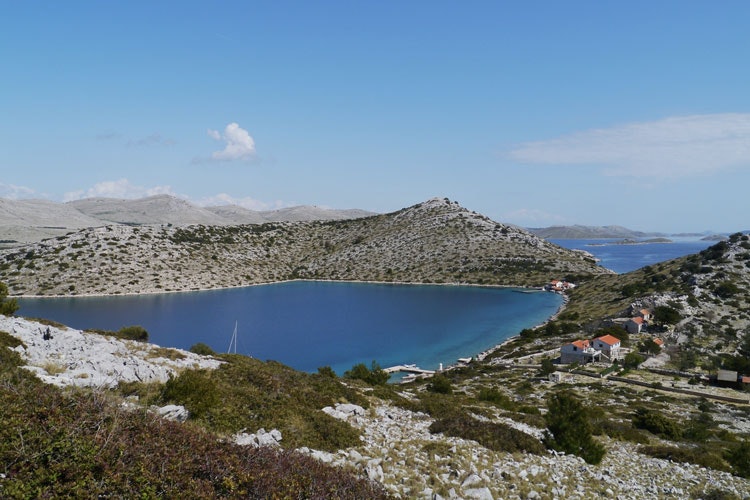 In the morning raise the anchor and sail 11 Nm toBrbinj Bay, where there are a number of mooring buoys. There are nice anchorages in the south-west corner of the bay, where you can enjoy good snorkelling by the rocks. When you’ve had enough, sail further north along Dugi Otok.

This route leads around several abandoned submarine pens (in the bays of Bokašin and Dragov, for example), which are worth a visit. It’s enough to see just one -  the most southerly one still contains a landing craft. Definitely a hit with little sailors. You can even anchor in the pens at night as they’re well protected. 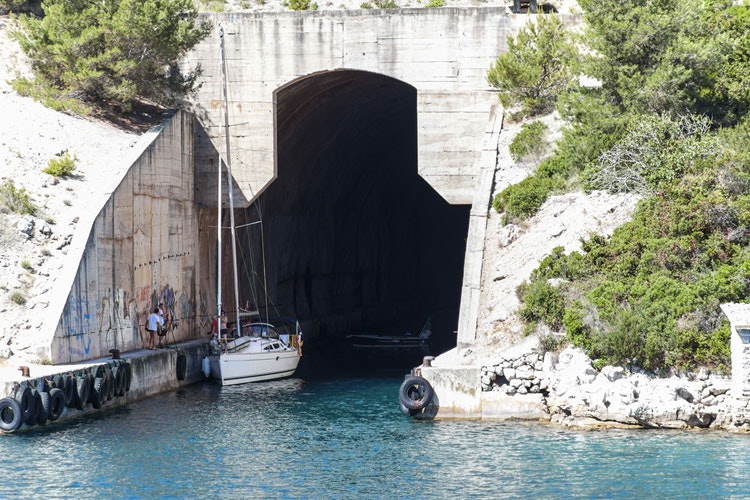 From Brbinj it’s a mere 12 Nm to the north of the island, where the partly submerged wreck of an Italian merchant ship, which sank in 1984, lies off Vele Lagne. A good time for all is guaranteed, the snorkelling is fantastic. You can drop anchor close to the wreck and swim up to it. We recommend visiting in the morning, when the sea is usually calmer.

In the morning, sail back to the north of Dugi Otok towards Veli Rat. There’s an isthmus here and on the inner, island side the sea is shallow and wonderfully warm as bath water. It’s possible to drop anchor on the outer side or anchor to mooring buoys on the inner side. There’s also a marina on Veli Rat and a few pleasant restaurants. 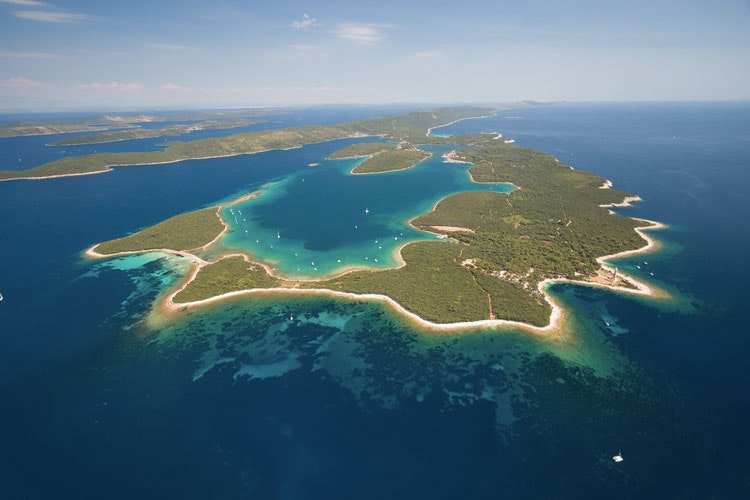 Veli Rat and headland with lighthouse

In the afternoon you can sail into the lovely port of Božava on Dugi Otok – 6 Nm. Božava is a picturesque port surrounded by nature and pine forests. It’s also home to one of the nicest beaches on the island. It’s a pebble beach, sandy in places, which slopes gently into the sea and its crystal-clear water. 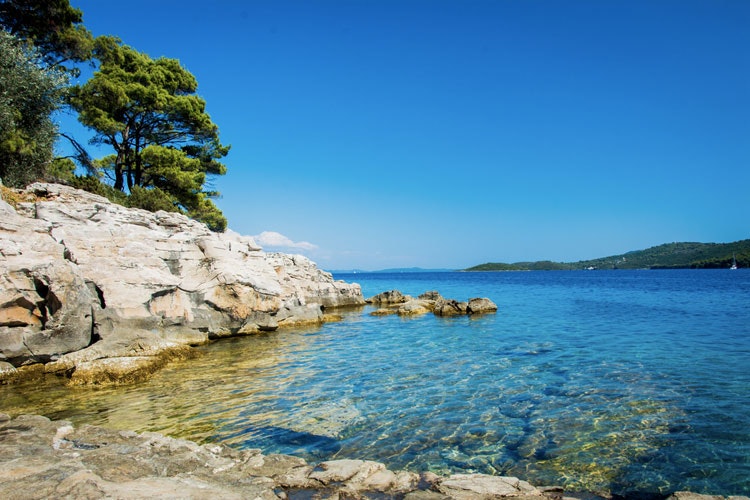 Drop anchor in the afternoon and enjoy some swimming in the south of Lavdara Island perhaps, where there are several small pebble and sandy beaches. Then continue south to the island of Žut and Hilajica Bay. It’s a lovely bay with a restaurant, 13 Nm from Iž. In the afternoon raise the sails and sail 8 Nm back to the island of Vrgada. 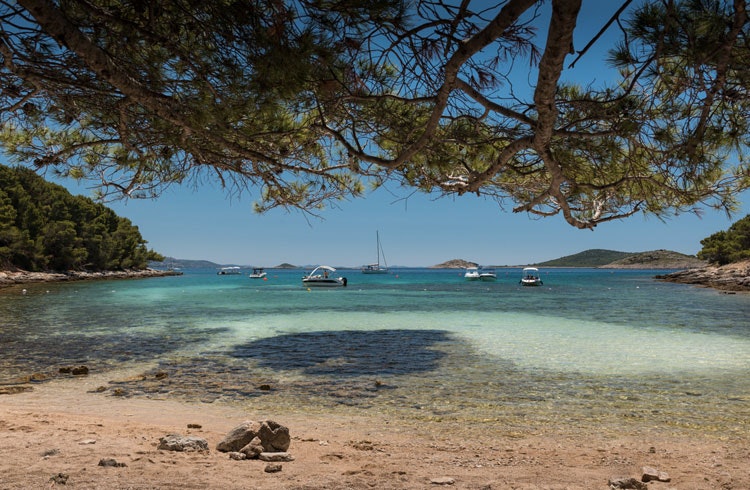 There’s time to enjoy some more swimming in the morning and the sandy beach. In the afternoon you’ll raise anchor and return to Biograd, 5 Nm.

Tips for stress-free sailing with kids

Sailing with kids brings plenty of joy and new experiences, but it’s also a great school of life. If you pick the route well, include lots of attractive stops and fun, success is most certainly guaranteed!

Do you want to enjoy a more awesome sailing experience with your children? Join our Children’s flotilla sailing trip for little sailors. It’s full of adventure, games and pirate expeditions! Instructors look after the kids for part of the day and delicious food is prepared for everyone in the floating kitchen. So you can even enjoy a well-deserved break.