The yachting°com Sailing Guide to Greece

Greece is a region you could sail for 10 years and still have something more to discover. Each area has something different to offer. The lush green islands of the Ionian Sea, so fragrant in the spring, afford effortless sailing. The Cyclades and Dodecanese are dry and arid, with Meltemi winds making yachting on the Aegean Sea particularly challenging even for experienced sailors.

Why sail in Greece?

Ask me about sailing in Greece.

The sailing regions of Greece are divided into the Ionian Sea, Saronic Gulf, the Cyclades, the Dodecanese, and the Sporades islands in the Aegean Sea. The sea around Greece is dotted with over 2,000 islands, making it a perfect spot for sailing. The most popular destinations are the islands of Corfu, Lefkada, Ithaca, Cephalonia and Zakynthos.

Thanks to its sheltered waters, the Ionian Sea and the area of the Saronic Gulf are ideal for a relaxing family holiday with children or friends. The Aegean Sea offers more challenging yachting conditions and is particularly suitable for experienced sailors. The Sporades and the Dodecanese offer a combination of both.

The Cyclades form a rough circle (”kyklos” in Greek) around the island of Delos. The Cyclades include 30 larger islands and around 190 islets. Each island is a great holiday destination in itself for romantic couples, groups of friends or families. The most popular islands in Greece are generally Santorini and Mykonos, while other frequented islands include Paros, Naxos, Ios, and Sifnos.

As is common in Greece, the islands are highly diverse in nature with each holding its own individual charm. Corfu is evergreen and varied, the facing mainland coastline beckons with its picturesque harbours and sandy beaches, and the small islands of Paxos and Antipaxos offer turquoise seas, romantic rocky bays and small historic harbours. Short distances between islands guarantee effortless sailing which is just as easy as it is in Croatia.

This part of the Ionian Sea is broader and more spread out than the north. The area between the islands and mainland creates an inner sea, well protected from the western winds and waves, making it ideal for novice sailors and for family trips. The island of Ithaca is rugged and hilly. Zakynthos is known for its mountain villages, secluded monasteries and captivating views. Cephalonia is the largest of the islands and is home to the Ainos National Park and numerous resorts. Lefkada offers everything from mountain villages to seaside resorts. The South Ionian Sea stretches along the Peloponnese coastline all the way to Kythera Island, although it's too far to reach on just a 7-day trip from Lefkada.

The Saronic Gulf is located near Athens and is a very popular destination in the Aegean Sea due to its easy accessibility, historical sights and good sailing conditions.  The Meltemi does not blow as hard in the summer here as in the Aegean Sea and the distance between islands is short, making sailing relatively easy. Due to the proximity of Athens, the area is very popular with tourists, but on a sailing yacht you can still find peace on the deserted bays and beaches of the islands and islets.

The Dodecanese are a group of Greek islands in the Aegean Sea, located southwest of the Turkish coast. The Dodecanese islands are a popular destination in the summer, especially for experienced sailors because the Meltemi blows quite strongly here. However, in spring and autumn they are also suitable for less experienced sailors. The chain of islands has much to offer. Beautiful beaches, great conditions for surfers and kiters, historic harbour towns, ancient monuments, and small fishing villages where you can avoid the normal tourist rush, even in high season.

The Sporades are located south of Thessaloniki and the Chalkidiki peninsula and comprise of four inhabited islands and several uninhabited islands, all bathed in natural beauty. Skiathos is the centre of fun with its buzzing nightlife, while the islands of Skopelos, Alonissos, and Skyros are much more tranquil. The uninhabited islands of Kira Panagia, Gioura, and Skantzoura are truly remote and isolated, and as there are no mobile signals here you can completely disconnect from the outside world. 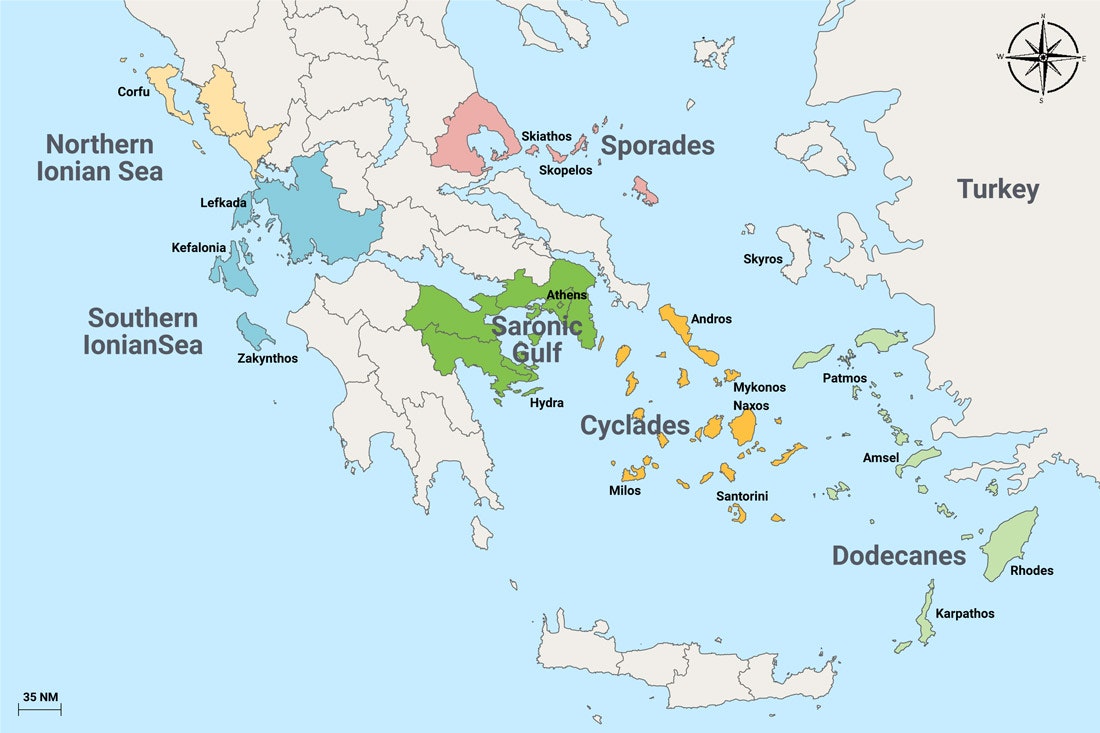 The Meltemi is often mentioned in Greece. This dry, katabatic wind mostly avoids the Ionian Sea, but fully manifests itself in the Aegean. In the form of a descending wind, it may also threaten the leeward side of the island. Meltemi warnings apply to the islands of Kea, Evia, Tinos, Andros, Folegandros, Kos, Serifos, Amorgos, and Sifnos.

The Meltemi moves completely undisturbed along the wide corridor between the Cyclades and the Dodecanese and is at its most intense in high season when it can reach speeds of over 100 kph. But even the Meltemi winds have their positives. They cool down the relentless summer heat, aid visibility and reduce moisture. In April, May, and June, just as in September and October, a stable and reliable Mistral wind blows in the Aegean and Ionian Seas. During these periods there are no intense Meltemi winds to contend with. By the end of the high season, the sea has warmed to a tropical 28–30°C but it is possible to swim in Greece from as early as May, when sea temperatures are 19–21°C. The average daily peak air temperature on Naxos rises from 19 °C in April to 27 °C in July and August. By October the temperature has dropped to 22 °C.

Olive oil is the most characteristic and indeed oldest ingredient, which you will find in almost every single dish. Olives themselves are also used in abundance (the most famous being black olives from the town of Kalamata), as are tomatoes, capsicum, aubergine, courgette, onion, potatoes, green beans, and okra (edible hibiscus). Commonly you’ll find a combination of meat and ingredients mostly used in other countries for sweet dishes (such as cinnamon or raisins).

Mezedes is typical when dining in Greece and comprises of a number of small appetizers served with wine. These include various cheeses, loukaniko herb salami, fried chunks of octopus and squid, vegetable salads, or pitta bread with tzatziki or other dips. Desserts are very sweet and made with a thinly layered filo pastry, nuts and honey.

The local diet differs from region to region. Game, especially boar, is popular in the mountainous and wooded northern part of the country whereas seafood is typically consumed on the coast. Typical types of fish on offer are the common sole (a type of flatfish), mackerel and silverside.

The Ionian islands, which were ruled by the Italians for a long time, differ to the rest of Greece in their liking for pasta. Crete excels with its many local specialities (paximadi wholemeal bread and dakos salad prepared as an accompaniment) as does Cypress (halloumi herb cheese or lountza, pork tenderloin marinated in wine and smoked).

There are some excellent drinks to be had in Greece. There are some fine wines and, of course, the Greek national drink ouzo, a traditional anise liquor originally created in Asia Minor from Turkish raki. Another infamous Greek spirit is Metaxa, which is a unique combination of brandy and liqueur. Greek coffee is served at the end of every meal and is made from finely ground coffee beans without filtering.

Greek history is as gripping as it is illuminating and has been documented over a longer period than any other region of Europe. Its roots lay in the ancient Minoan civilisation on the island of Crete which was the first advanced civilisation in Europe. Elaborate palaces were constructed as seats for the rulers with towns developing around them. It was eventually replaced by the Mycenaean civilisation, but the rulers fought frequently with each other and there were significant social differences between cultures. In the end the civilisation was likely invaded by the “Sea Peoples” and then superseded by the Dorian culture. This was followed by a period of decline known as the Greek Dark Ages.

A new boom only began with Greek colonisation and the development of the ancient Greek polis. This period of prosperity gave rise to the ancient Greek culture which became the cornerstone of the entire western civilisation. Greece successfully defended itself against attack from the Persian Achaemenid Empire, but was eventually defeated, mainly due the internal conflict between Sparta and Athens. The Macedonian king, Philip II, used this opportunity to conquer a major part of the land. His son Alexander defeated the Persian empire and made it as far as the area around the Indus River. After Alexander’s death and when Greek and oriental culture became intertwined, the Hellenic period began in Babylon. Greece became a part of the Roman Empire in the 2nd century AD.

Until 2005, divers were only allowed access to 10 % of the total 16,000 km of Greek coastal waters. After changes to legislation, however, diving is now permitted all over Greece. Below you can find information about the most interesting diving spots in Greece.

There are about 90 diving centres throughout Greece. There is top-quality centre on Mykonos, surrounded by an enchanting undersea world. For one dive you will pay EUR 60, including equipment rental, a guide and boat transport. A package of five dives will cost you EUR 250.

Caves near the island of Tragonisi

This diving spot, situated southeast of the island of Mykonos, is a true gem. Jump into the sky-blue abyss below and the amazing rock formations, massive caves, and shoals of translucent fish and anemones will take your breath away. It is not unusual here to encounter one of the Mediterranean monk seals that live nearby.

Wreck of the HMHS Britannic

Almost one hundred years after it sank, you can dive down to the sister ship of the Titanic itself. It lies on the seabed near the island of Kea, and seeing it is truly out of this world. Discovered in 1975 by the maritime legend Jacques Cousteau, this was the largest ship sunk during World War One. This is a very challenging dive.

This can be found a mere 7 km from the Turkish border. Head for the Great Wall for an experience full of wonder. Below the surface, you'll find everything from shipwrecks, to shoals of multicoloured fish, right through to huge rock massifs. The Great Wall itself measures around 30 m and is covered in colourful corals. You will be in the company of tuna, sea bream, and sea bass, and even a few sea turtles may even join the party.

Diving in Greece is subject to seven rules:

In Greece, the yachting infrastructure is nowhere near as developed as in Croatia. You rarely come across yachting marinas. The people you encounter here are friendly though, and you’ll rarely have to pay for mooring, usually just for electricity and water (if available).

Compared to Croatia, there are not many modern marinas. But if you do find one, it won’t cost you the earth. It is either free or for a symbolic amount. The same goes for moorings and city ports.

In Greece, the Aegean Sea offers much more demanding yachting than in Croatia.

Contact yachting°com today about your next sailing holiday in Greece or browse available yachts below.

Ask me about sailing in Greece.