Top 7 sailing destinations in Greece in 2023

Greece, the cradle of civilisation, is an increasingly popular yachting destination. Thanks to a mostly sandy seabed it offers excellent anchorages, so you’re not limited to marinas and buoys. Greeks are also lovely people who are not constantly looking to make money off holidaymakers a welcome change from Croatia) and often won’t even charge you for mooring at a wharf for several hours. Local cuisine is also well worth sampling and there are a plethora of places to go out. We’ve compiled a list of the top 7 places for yachting in 2023.

Greece is surrounded by two seas — the Ionian and Aegean. The former is not as acclaimed as the latter despite offering beautiful locations, so all the more reason to go there. The ideal time for sailing in the Ionian Sea are the summer months from June to September. During this time, the sea is usually very calm and the wind blows gently, with occasional gusts. Temperatures here are pleasant from April to October, which extends the sailing season in this area. While the water is generally very calm in the south, sailing can be a bit rougher in the north. 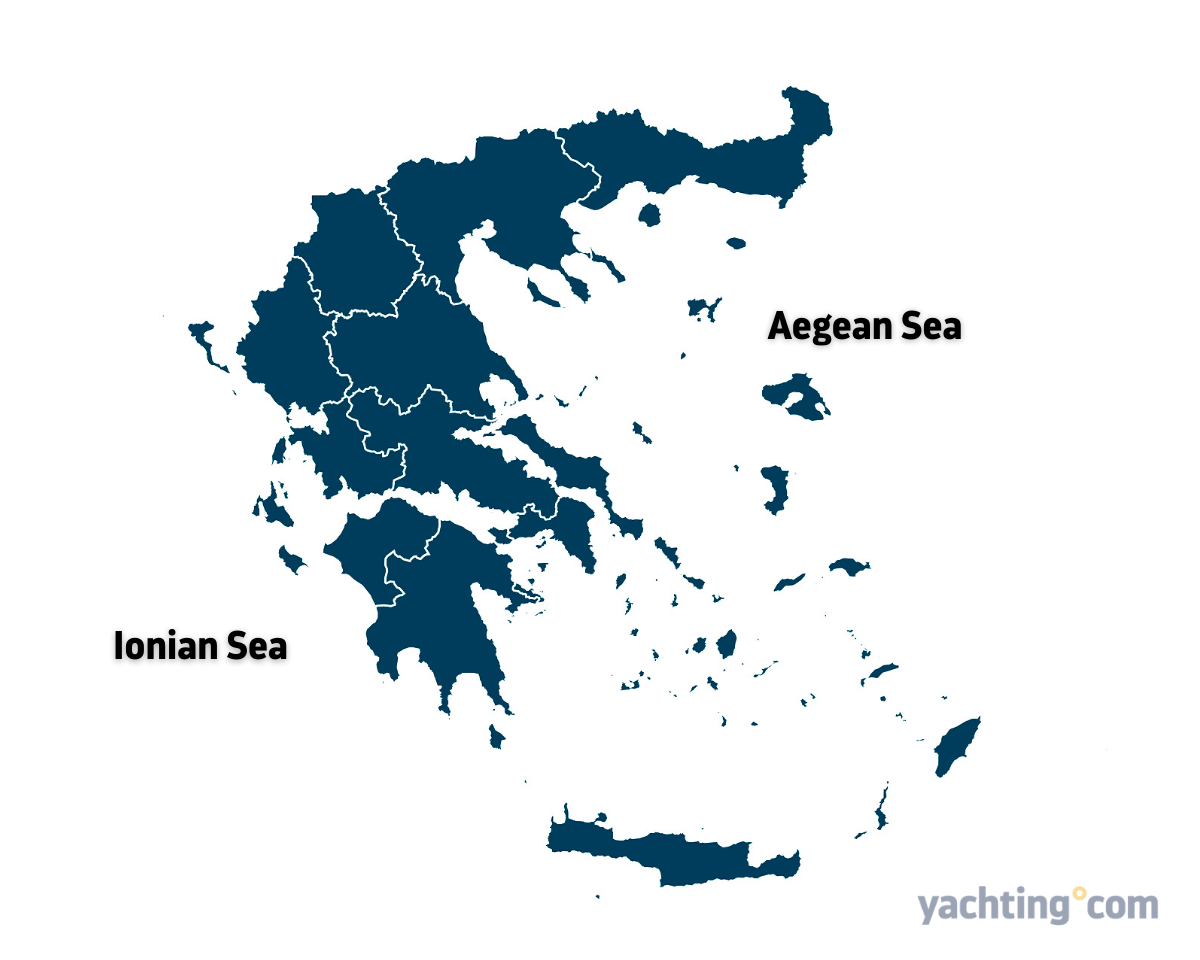 The Ionian islands are definitely worth seeing: whether it’s Corfu, Lefkada or Zakynthos, each one offers lush countryside and some of the most beautiful beaches in Greece. Calm waters, a multitude of secluded bays and decent infrastructure serve to make these islands a yachting paradise. Corfu and Zakynthos are sailing destinations par excellence, where you can find ample moorings and marinas and countless interesting tourist spots. However, in 2022 we recommend avoiding the crowds and heading for the less well-known islands, Paxos or Ithaca, the home of Odysseus. As these can only be accessed by boat, it’s a good job you’ll have one!

The east and west coast of Paxos consist of imposing sheer cliffs, making landing impossible. When the weather is calm, you can get close to the cliffs and explore various caves accessible only by boat. A definite must-see! 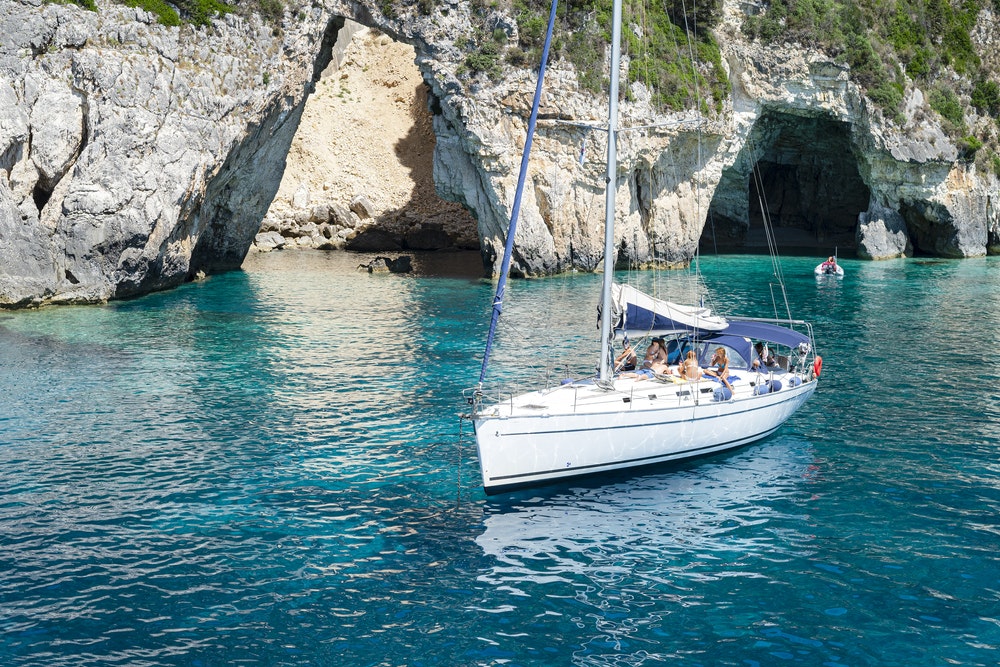 Kioni Harbour is definitely worth a visit and its picturesque lanes will be sure to capture your heart. The harbour is well protected from winds, even strong gusts. Ithaca offers countless beautiful bays with amazing beaches such as the pebble beach Pera Pigadi, or the sandy Andri beach (38° 18.40'N, 020° 43.41' E). If you're lucky, you can collect sea salt from the rock pools during the summer months. Make sure you don’t miss Polis Bay on the western side of the island. You can find the cave of Loizos bearing ancient inscriptions celebrating the Greek gods a short distance from the beach. Unfortunately, an earthquake left much of the cave under water and therefore inaccessible. Allegedly, Odysseus began his mythical adventures here.

Get a boat in the Ionian Sea 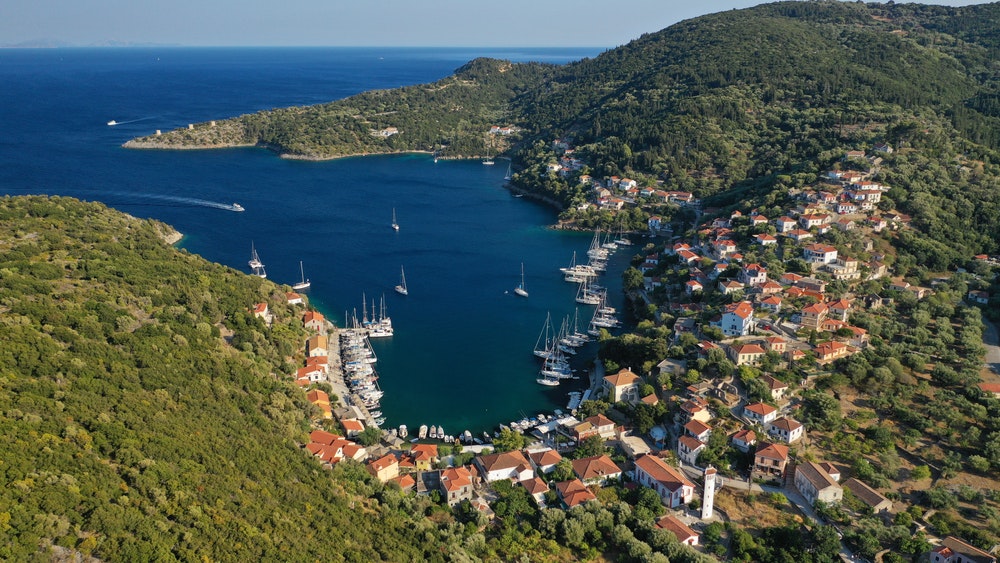 Unlike the Ionian Sea, the Aegean Sea is revered by sailors. This is primarily thanks to the sunny and largely unchangeable weather, constant and predictable wind and lack of tides and strong currents. Greece is associated with crystal-clear water and countless bays, an abundance of fabulous islands a stone’s throw from each other, picturesque harbours and secure moorings. Above all, one thing you have to count with in the Aegean Sea is the Meltemi. These northerly winds always blow in summer between May and September and are usually a pleasant force 5 on the Beaufort scale, but can often reach 7 or sometimes up to 9, which is when you need to be careful.

The strongest winds are usually around the islands of Mykonos, Astypalea and Icaria, but you can generally expect them across the entire Dodecanese. So where should you head to in the Aegean?

The Cyclades are made up of thirty larger islands and approximately another 190 islets with a total area spanning over 2,500 km2. They are a popular yachting destination mainly due to their relative proximity to Athens, where most international flights land. As the islands are not too far apart, the Cyclades offer a variety of experiences. On a single sailing trip you can explore several ports and bays in a very short time. It's not a problem to visit a different island every day, although the popular saying applies here: less is sometimes more.

The most famous are probably the islands of Santorini and Mykonos. On Santorini you’ll probably have to stand in quite a queue to get the perfect picture of the famous white church with the blue dome, the typical symbol of Greece. Mykonos is ideal for people who love busy places and partying. With more than a million tourists a year, it’s the second most-visited island in the Cyclades after Santorini. You can find world-famous DJs presiding over parties here day and night. This is definitely not a destination for the budget-conscious!

In the summer especially, prices can be very high.

Yachting is really more about well-being, privacy and relaxation, so in our opinion, you should leave out the most famous islands in the Cyclades and head for less well-known places

The small uninhabited island of Delos definitely offers more peace and quiet. It’s only accessible by boat and you won’t find any tourist accommodation here. The island is famous for its ancient archaeological sites and is a UNESCO World Heritage Site. It’s also considered the birthplace of the god Apollo and the goddess Artemis. According to legend, nobody is allowed to give birth or die here. After you’ve enjoyed its ancient monuments, you can raise anchor and set sail for the nearby island of Rineia. It’s only 14 km long and 1 km wide. It’s famous for its dreamy bays and secluded sandy beaches. 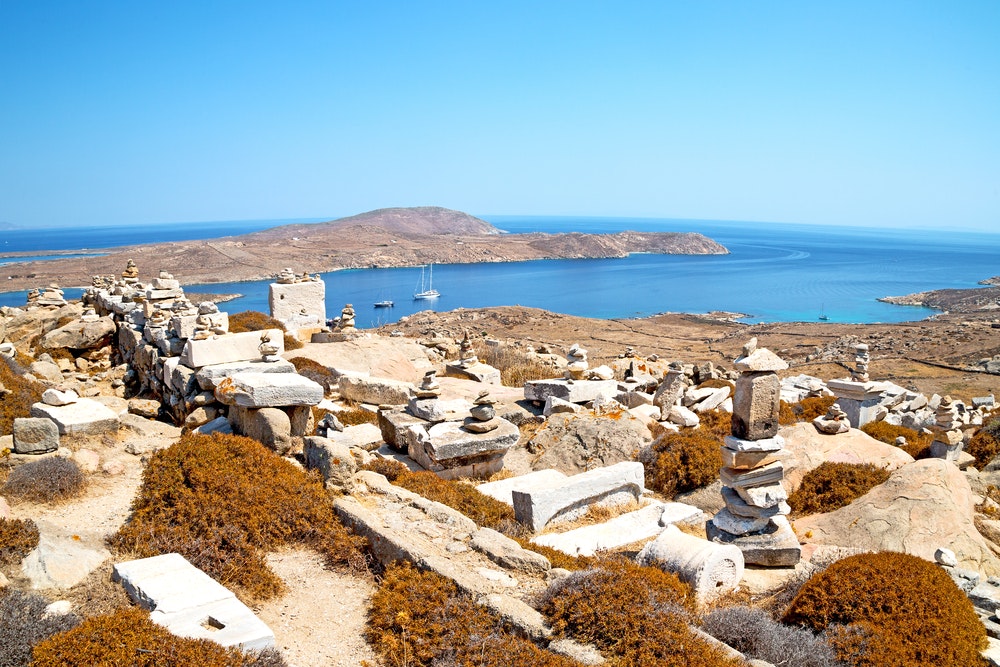 Paros is situated in the heart of the Cyclades and is famous for its many sandy beaches, beautiful countryside and traditional villages. The largest island in the Cyclades is Naxos. You can enjoy the many beautiful beaches here and discover mountain villages off the beaten track when you take a trip inland. If you want to enjoy the sunset on Naxos, head north from the capital to the islet of Palatia with its unfinished Temple of Apollo. The 2500-year-old marble doorway, Portara, faces Delos and you shouldn’t leave without a photo of the sun setting over the mythical gate of the god Apollo. 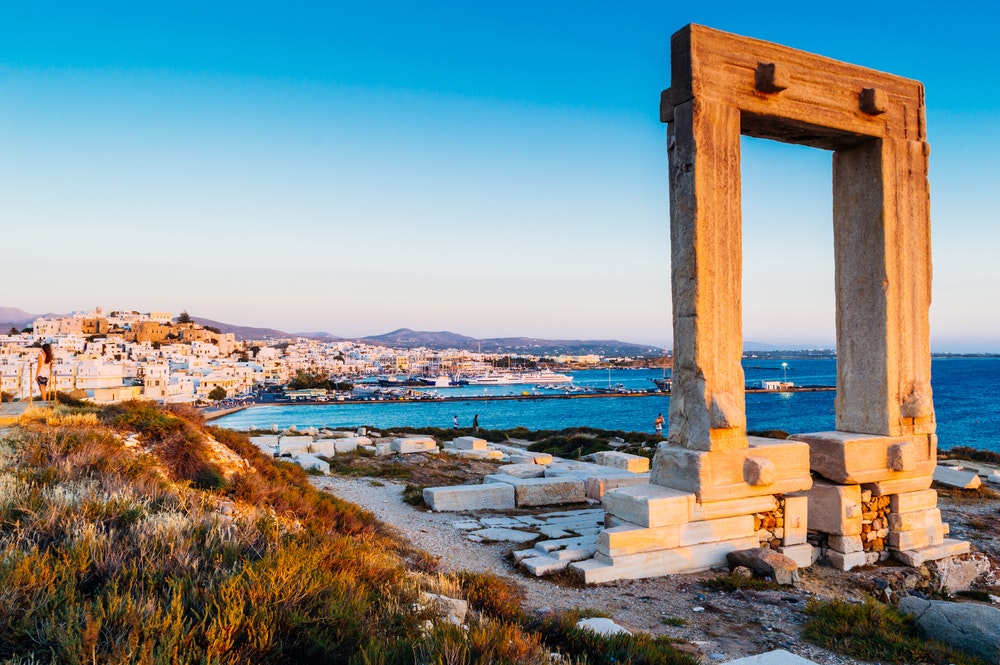 From the vantage point of your yacht, you’ll probably appreciate the volcanic island of Milos the most. Its unusual rock formations and high cliffs that plunge into the sea are truly breathtaking! Moreover, Milos has the largest number of beaches of all the Cyclades islands. There's a better chance of some privacy here compared to crowded Mykonos, but bear in mind that at the peak of tourist season in August, the island can get a bit busier.

Get a boat in the Aegean Sea 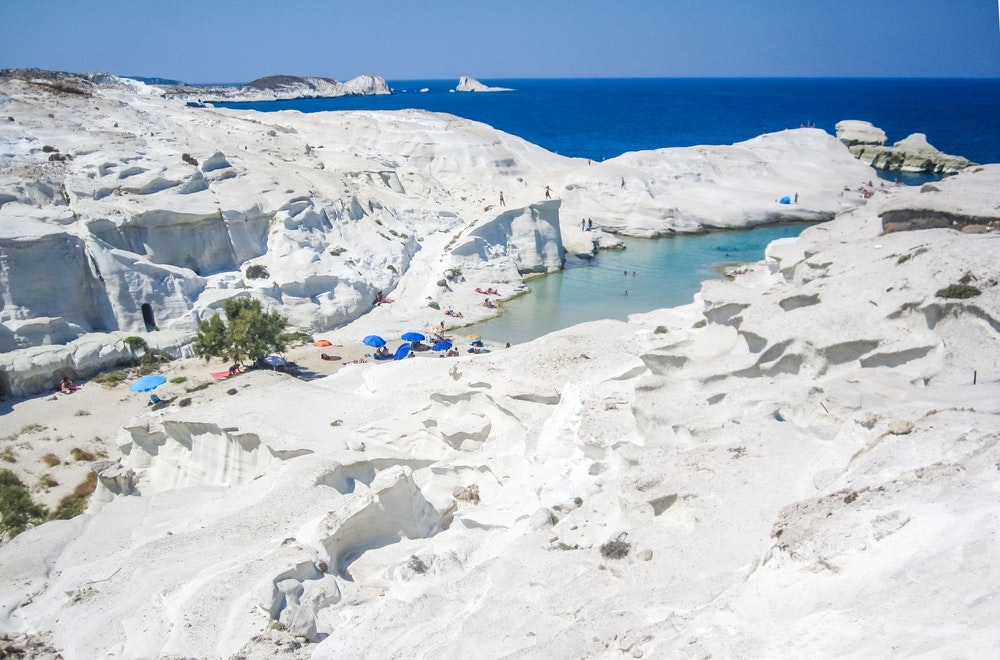 The islands of Koufonisia in the Small Cyclades archipelago are probably the most beautiful tourist destination for those who prioritise idyllic, tranquil evenings over buzzing nightlife. In modern Greek slang, the word “Koufo” means “unbelievable” and when you arrive, you’ll see why. These small, unspoilt islands have surprisingly good sailing infrastructure, so disembarking won't be a problem. We recommend explorin the whole archipelago, both the almost uninhabited Kato Koufonisia, where you’ll find only a few fishermen's houses and a picturesque church dedicated to the Virgin Mary; and Koufonisia itself, the smallest but most densely populated island of the Cyclades with a population of around 350. The main occupation here is fishing, making the island a genuine fishing village, where visitors can enjoy fresh fish and seafood. It’s also worth mentioning the village of Chora on the southwest coast of the island as a typical example of Cycladic architecture. 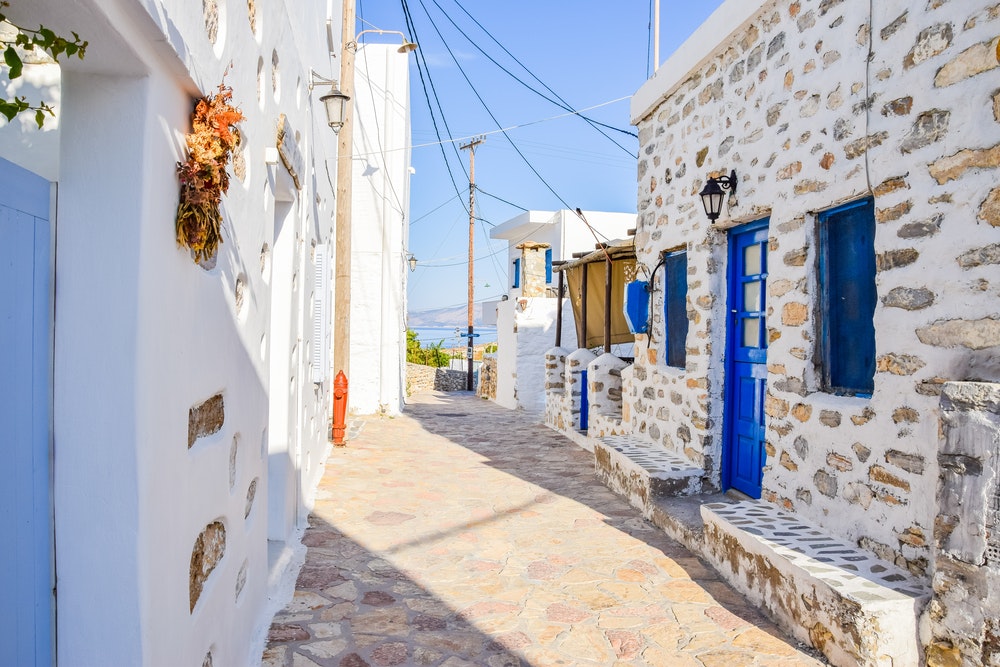 The Dodecanese are a group of Greek islands in the Aegean Sea belonging to the so-called Southern Sporades between the islands of Patmos and Rhodes, Kássos, Astypalaia and Kastellórizo. They lie southwest of the Turkish coast and you may accidentally drift into Turkish waters. In case this happens, the charter company will probably equip you with a Turkish flag. After all, no one wants to get into a dispute with a Turkish destroyer.

It’s better to charter a boat on one of the islands, as the crossing from Athens can be quite a challenge even for experienced sailors. Especially in summer, when the Meltemi winds blow, sailing on the open sea can turn into an uninvited adventure. Between the islands themselves there’s not so much drama, so feel free to head to any one of them.

Almost every major island of the Dodecanese, be it Rhodes, Kastellorizo, Karpathos, Astypalaia, Leros, Kalymnos, Kassos or Kos, has its own airport and in high season there are direct flights from Prague.

As in the Cyclades, the islands are generally very close together so you can go to a different one each day. However, it is worth choosing one and exploring it thoroughly. Whether you decide to admire the main island of Rhodes or the tiny islands of Lipsi, Arki and Agathonisi is entirely up to you. Unfortunately, you can't sail under the famous Colossus of Rhodes, as it was destroyed in an earthquake in 226 BC. However, where the god Helios once stood proud, two columns with statues of fallow deer remain. 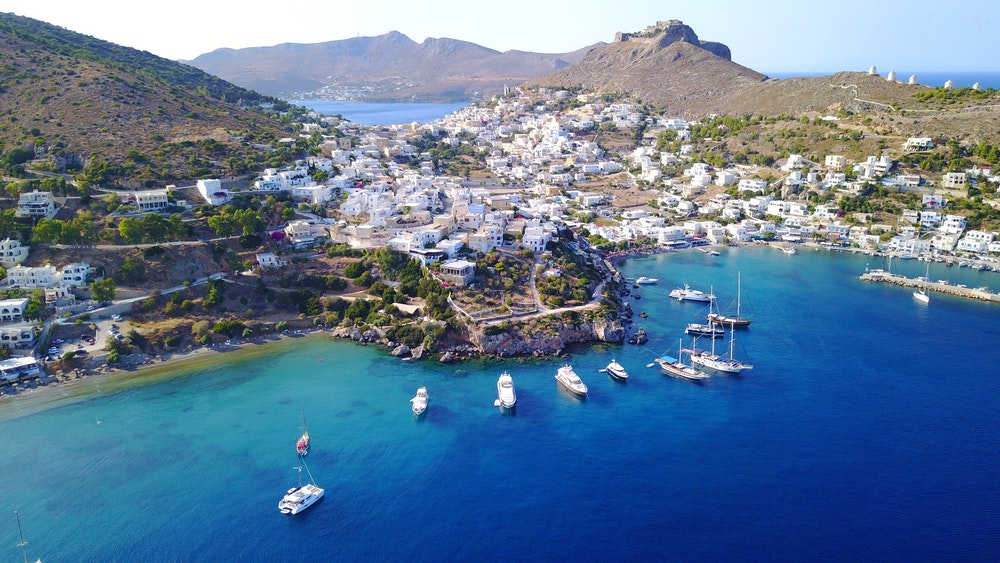 A hidden gem according to the author of this article. With nineteen beaches, twelve mountains with natural springs, seven mediaeval castles, a Byzantine monastery and two hundred churches, Tilos is the place to explore. Plus, with only about five hundred inhabitants on the entire island, it's a relatively quiet destination.

If you want to experience something special and experienceauthentic Greek culture, plan your cruise so you’re on Tilos on July 27th. This is when the Feast of Saint Panteleimon, the patron saint of the island, is celebrated. A big celebration is held in a monastery dedicated to Saint Panteleimon, nestled in the middle of the mountains. You can dock your boat at the wharf in Livadia and take a bus to the venue. Just the ride through the serpentine mountain roads in a packed bus is a great experience, before you even get to the monastery itself. The monastery stands on a cliff above the sea, where a sacred spring emerges. Locals flock here in droves, dancing and eating traditional Greek food and are more than happy to welcome tourists. Your greatest achievement during a Greek circle dance will be failing to trip up or trample the feet of the person next to you. And don't forget that the tempo gets faster and faster! 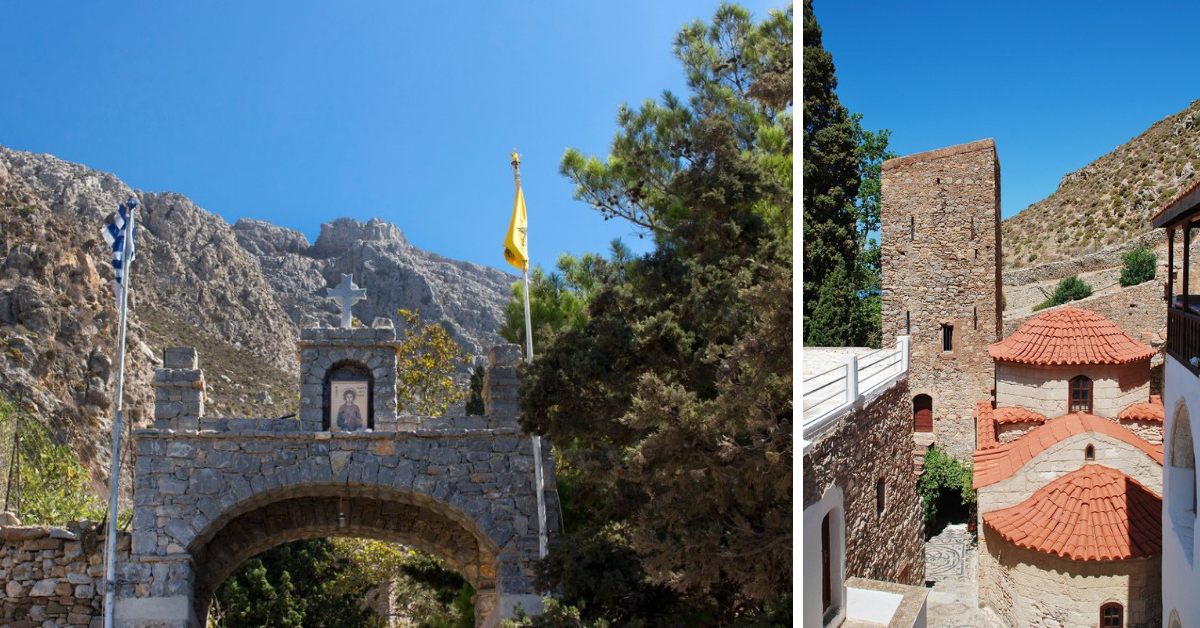 A final piece of advice…

Mooring in Greece is usually very cheap — if not free — at the town wharfs, as the locals usually waive the fees if they’re low. Skippers may be surprised at the way the wharfs are set up. Stern-to mooring (otherwise known as Med mooring) is not uncommon here. This manoeuvre requires a bit of practice and skill, so it doesn't hurt to study it beforehand.

Our boat offer in Greece

I bet you no longer doubt about vacation in Greece. Call me and I will find you the right boat.