Yachting in Greece: tips for sailing in the Sporades islands

Beautiful scenery, turquoise waters, sandy beaches and picturesque villages dotted with houses aglow in white, blue and pink. We invite you on a route full of the most beautiful places!
Published by Yachting.com - 06/01/2022

Do you know where you can find a true sailing paradise? In the Aegean Sea, hidden from the swarms of tourists and still unknown to many sailors, is the Sporades archipelago. We invite you on a voyage through the most stunning locations places, which will satisfy lovers of ancient Greek history and the summer hit musical Mamma Mia!. Plus, there's great sailing, low prices, friendly locals and delicious food!

Where are the Sporades?

The Sporades are a charming group of islands scattered in the Aegean Sea (this name is generally used for the northern group of islands). It consists of about 135 mostly uninhabited islands and islets, which lie along the coast of Thessaly, north of the island of Euboea. The most important of these are Skyros, Skopelos and Skiathos. And perhaps you realised — these islands give us the word sporadic (meaning scattered or infrequent). 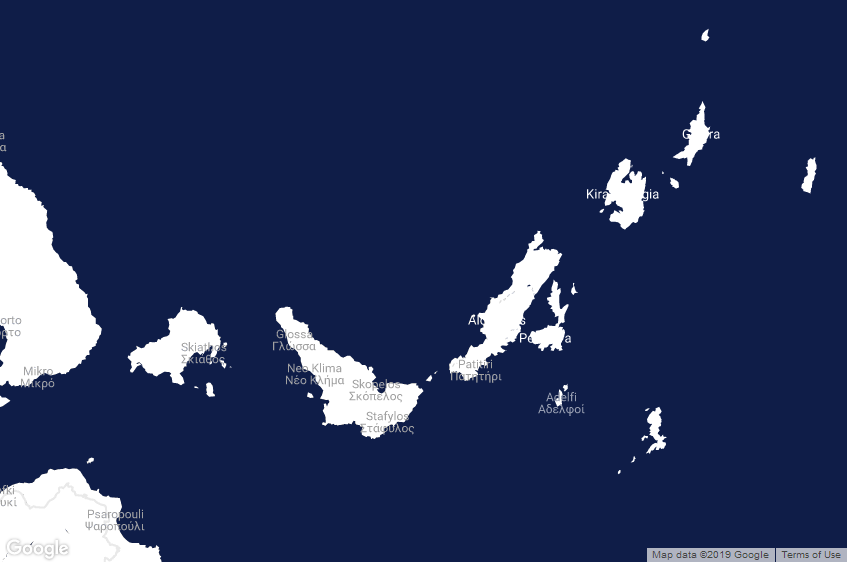 Sailing routes around the Sporades

Our route plan takes you through a glimmering ocean, lined with the most beautiful destinations. The distances between the islands are short and the southern coast of the islands is well protected from the Meltemi winds and its waves.

You can try out our 7-day route which will take you on a journey of about 150 NM but if you want to enjoy a larger slice of Greek tranquillity, go for our 14-day route.

You can start your cruise from the island of Skiathos or from the port of Milina east of the Pagasetic Gulf. The bay is shallow and has plenty of picturesque fishing harbours. And, according to myth, it is from here that Jason and the Argonauts set sail on their quest for the Golden Fleece. 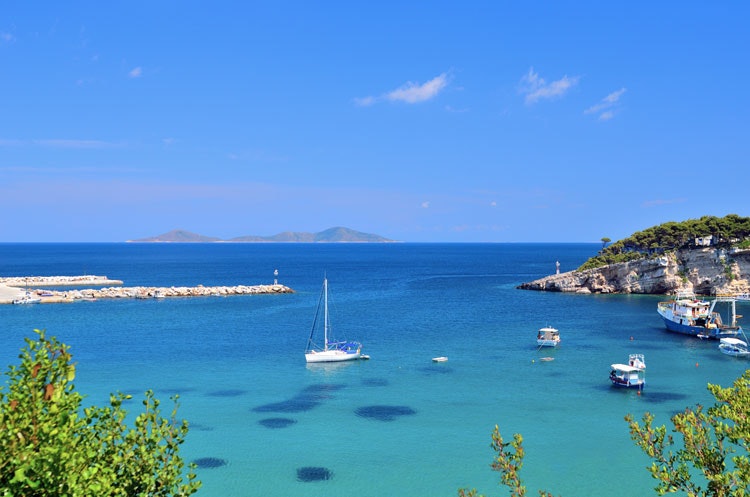 Bay in the Sporades, Greece

Croatia vs. Greece. Where is better sailing?

Top 7 yachting destinations in Greece in 2023

Croatia vs. Greece. Where is better sailing?

Top 7 yachting destinations in Greece in 2023

Unmissable stops on your tour of the Sporades

Skopelos is the largest and greenest island with shores awash with clear, turquoise waters. This incredibly fertile island is covered by pine forests and the orchards and groves full of the pears, almonds, citrus, and plums between have made the island famous. Of course, there are also olives and vineyards. Be sure to try the local specialties — olives, feta cheese, the local cheese cake, honey and plums.

The first stop on the island (only 15 NM from Skiathos) will be the bay and the white pebble beach of Panormos. Near Panormos, on a hill above the town, lies the beautiful St. Panteleimon monastery with its stone church. Skopelos is indeed a "city of churches". There are one hundred and twenty-three of them, and among these, the 9th century Agios Athanasios, with its beautiful 16th-century frescoes, is certainly not to be missed. It is protected by the walls of the Venetian Fortress and was built on the ruins of the ancient temple of Athena.

From the town, there are countless hiking trails and one of them will take you along the olive groves to the highest peak of the island, Mount Delphi (680 m). One of these paths will also lead you to the Sedoukia Pirate Graves, which are carved into the rock. Finally, in the hills east of the city, you will happen upon the several scattered monasteries and nunneries. 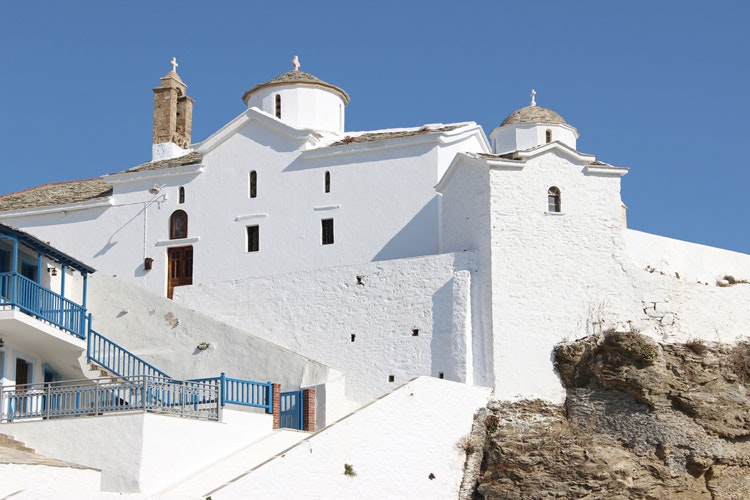 YACHTING.COM TIP: Skopelos gained its fame thanks to the musical Mamma Mia! with songs from Abba. If you want to see the spot where Pierce Brosnan married a surprised Meryl Streep, be sure to stop here at the end of your trip before returning to Skiathos. The chapel on the steep cliff is located on the east coast. You can get to it by taxi from any port on the island or, if the seas are calm, anchor right beneath the cliff itself, which has a small beach below. Be warned — you can only anchor here if there is no Meltemi. After climbing the steep steps, you'll be rewarded with a charming and romantic view. 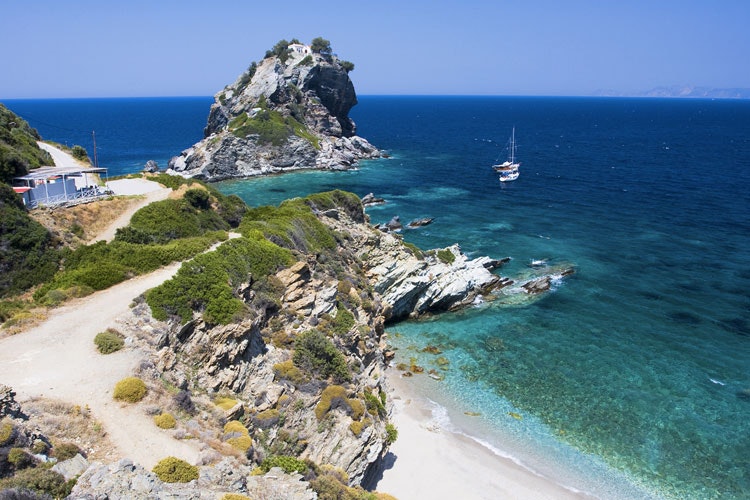 Chapel from Mamma mia! on the cliff of Skopelos

Warning: During strong north-easterly winds, the sea can be difficult as a result of the shallow entrance to the harbour, which sometimes completely prevents entry. Under these conditions, there is a ferry that goes to Agnondi on the west side of the island.

Arkos is a 15-minute cruise from Skiathos harbour and there is a fabulous sandy beach with a bar on the west coast. From the beach, you can climb a steep sandy dune which is especially fun for children. Moor in front of the beach, ideally anchoring from the bow with a long rope to the stern.

This wild island, with its magnificent mountainous landscape, flowering meadows, and pine and olive groves, is not particularly popular with tourists, but this is what will make it all the more seductive to sailors. In addition to the more rugged inland, you can enjoy pristine secluded beaches, superb swimming in the most immaculate sea, as well as safe anchorage. Be sure to try the local almonds, grapes, figs, olives and wine, as well as their cheese and the delicious walnut cake.

The establishment of the Alonissos Marine Park for the protection of the Mediterranean seal has also contributed to the preservation of the island. To date, barely 800 of these creatures have survived and 30 of them live on the islands. The reservation includes other interesting islands — Pelagos (Kira Panagia), Yioura, and Piperi. 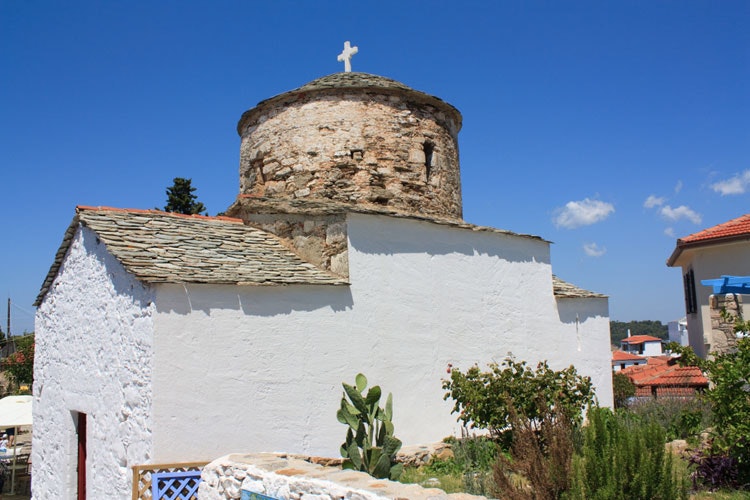 Church on the island of Alonissos

Kyra Panagia is also part of Alonnisos Marine Park. On the east coast, at about the midpoint, there is a small bay with a pier and a monastery on the rock above the bay, whose history dates back to the turn of the first millennium. There you can admire 6th-century relics, 18th-century icons, and also a beautiful star-shaped mosaic in the courtyard.

There’s an old monk who until recently was the only inhabitant of the island. He lives at the monastery and is extremely hospitable and sociable. Speaking perfect English, he makes you feel that you are genuinely in the presence of a holy man, and you will long to be as calm and serene as him.

Mooring is possible in the bay (anchoring bow-to and using ropes to tie the stern to the concrete pier or the rocks). There is also a nice little beach and excellent opportunities for fishing. 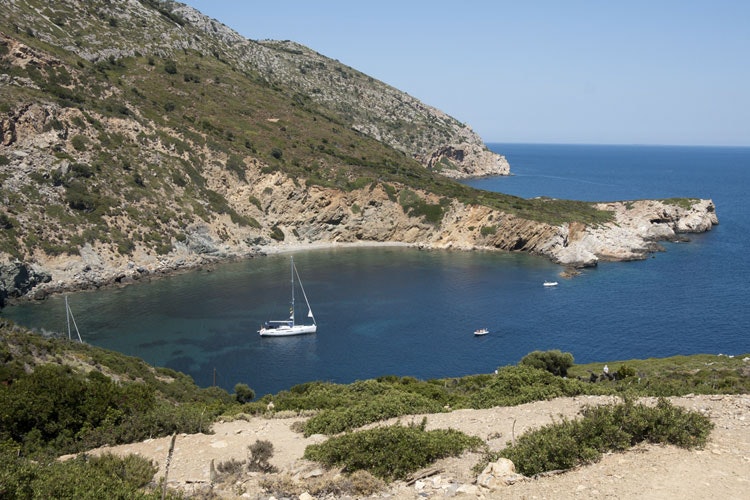 YACHTING.COM TIP: If you like snorkelling, don't miss the north of the northernmost island of Psatoura, where, according to myths, lies the sunken ancient city of Halonnesos. But what looks like the remains of walls and streets on the seabed are most likely just rocks stacked in regular forms. The best time to snorkel is in the morning and early afternoon before the afternoon winds blow and the sea swells. A good anchorage is in the south of the island, where there is a nice sandy beach.

It was Skyros where Achilles was sent by his mother to avoid becoming involved in the Trojan Wars. Skyros, with its handful of white, cube-like houses, speaks of ancient times. In the side streets, you have the chance to marvel at beautiful ceramics, wood carvings and coppwork.

In pride of place, above the city where the acropolis once stood, there now stand the towers of the Castle of Lycomedes, named after the king of the same name. You can get there by using the mysterious tunnel under the monastery of Moní Agíou Georgíou, where you can admire the magnificent fresco of St. George slaying the dragon.

Your journey will begin and end on the island of Skiathos. Be sure to make a stop at Lalaria Beach. Legend has it that when you sail under the naturally created stone gate, you will be blessed with eternal youth. Lalaria Beach is only accessible by boat, but you will be rewarded with views of the magnificent rocks and white sands awash with turquoise waters. 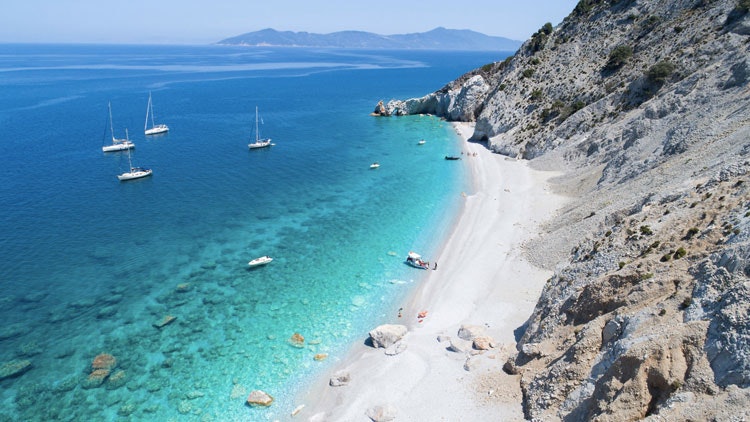 What to expect of the weather and winds in the Sporades?

The Meltemi winds are not as strong here as they are to the south. The prevailing wind is NNE, but the exact direction is influenced by the islands and the channels between them. On the southern side of the archipelago, there are few waves. The combination of the Meltemi winds on one side of the island, and calm seas on the other is very attractive for sailors and flotillas are frequent here.

Has Greece won you over yet? No wonder. The diversity of its beaches and bays means that you could spend a lifetime exploring it by boat and still have more to discover. The Sporades are the perfect place to start and we have boats available and waiting for you!

Find a boat for the Sporades

Where is the Sporades archipelago and how many islands do they include?

The Sporades are a charming group of islands scattered in the Aegean Sea. However, the term Sporades usually refers to the Northern Sporades, especially the islands: Skopelos, Alonnisos, Skiathos, Skyros, Kryra Panagia, Peristera, Gioura, Skantzoura, Piperi, Tsougria. Of these, only four (Alonnisos, Skiathos, Skopelos and Skyros) are permanently inhabited.

The complete Sporades archipelago is mostly divided into five groups:

Northern Sporades: sometimes called just the Sporades. Southern Sporades: this includes the Dodecanese islands, or group of 15 larger and 150 smaller Greek islands in the southeastern Aegean and eastern Mediterranean off the coast of Turkish Anatolia, 26 of which are inhabited. This group of islands generally defines the eastern boundary of the Cretan Sea. The most famous islands are Rhodes, Kos and Patmos, Agathonisi, Astypalaia, Karpathos, Kasos, Marathos...). Sometimes Samos and Ikaria are also included in the Southern Sporades. Thracian Sporades: Thasos, Samothrace, Imbros, Lemnos and Agios Efstratios. Western Sporades: islands in the Saronic Gulf and the Myrtle Sea. Eastern Sporades: islands in the eastern and north-eastern Aegean Sea off the coast of Asia Minor, namely Samos, Ikaria, Lesbos, Chios, Tenedos, Psara, Oinousses and smaller islands.

The film was shot on the island of Skopelos (Sporades archipelago) in the Aegean Sea. It is here that you will find the chapel of Agios Ioannis and you can reach it by a narrow path with 110 steps carved into the stone (just as Meryl Streep did in the film). Right under the rock you will find a small beach, which is quite crowded in summer. A few scenes from the film were shot on the island of Vis in Croatia.