Although it doesn’t seem so at first glance, yachting and running have a lot in common. The combination of these two activities attracts more and more new supporters each year. Become another of them and try out our beautiful cross-country trails for the casual jogger and performance athlete

We recently introduced you to the specifics of running in Croatia and today we recommend three beautiful cross-country routes. Absolutely everyone can do the first of them. Anyone who already has some experience should be able to handle it. The second can be varied to suit your level. Run a few kilometres along a nice bike trail or mix it up with a cross-country trip to the highest hill on the island of Krk. The third route is strictly for experts and can be livened up by running up the highest hill of Rab and sitting in a fairytale pub with spectacular views. 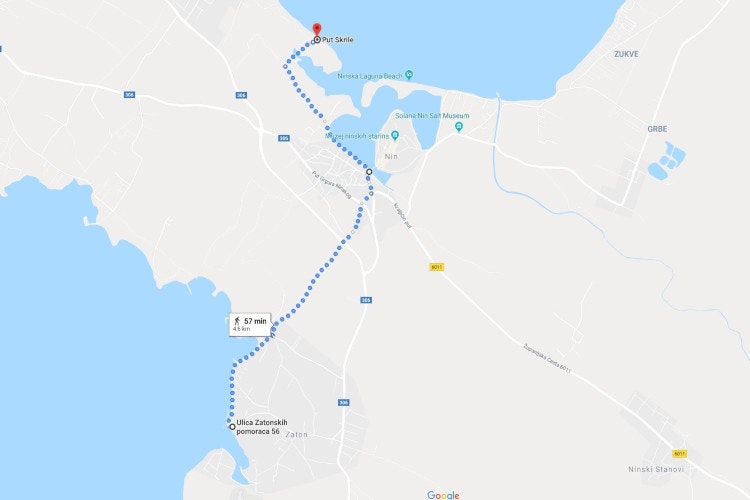 During your voyage, you’ll probably find yourself close to the mainland, specifically Zadar. Thus the proposed route can be a sporting, non-sailing activity at the beginning or end of your trip, when you’ll inevitably start to approach solid ground.

The route can also be taken from Zadar towards Zaton (adding another 15 km in one direction), but since it’s impossible to avoid a few kilometres on an unpleasantly busy road, this option is recommended only for adventurous and more tireless running enthusiasts.

A much more comfortable way is to land at Zaton and from the deck of the boat head first along the coast to the north and then directly to Nin. The route includes a kilometre or two in more industrialized areas which doesn’t make for great viewing but the traffic here is almost nonexistent. The road to the northeast will take you right in front of the ancient bridge to the Nin peninsula. Skip this one though and continue along the coast and past the city berths towards the camp “Ninska Laguna”. However, do not turn off the road, continue straight to its sister camp “Ninska Laguna 2”. A dirt road leads to it, and follow the better maintained one, turning directly east, to the sea. The way will be lined with rafts, which will make it clear that you’re in the right place. 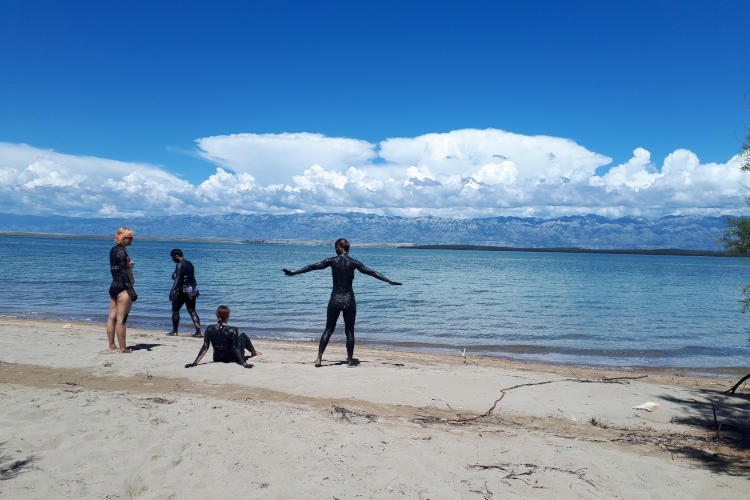 The area is marshy, with shallow lakes, something like puddles full of black, supposedly medicinal mud. We haven’t seen anybody other than the Czechs here in this somewhat smelly substance. It is also possible that the legend of its curative effects was released into the world by mischievous natives, who then only from afar amusedly observe the confused tourists as they pounced on their bait. But even if it isn't healing, it’s fun, right! The correct course of action is the following: Spread black mud on top of each other and let the sun dry it completely. Then, in the sea bay of Ninski Zaljev, with some cursing, thoroughly wash off the said matter. It is especially refreshing for the skin, joints and overloaded muscles.

The small and picturesque town of Nin. The ancient Romans left behind ruins of some fascinating and very important monuments of their time. In the 7th century, Nin was a cultural centre of Croatia. There were also coronation ceremonies of Croatian rulers. Well worth a mention, among other things, is the world's smallest cathedral - the Church of the Holy Cross (Crkva svetoga Križa) from the beginning of the 9th century. 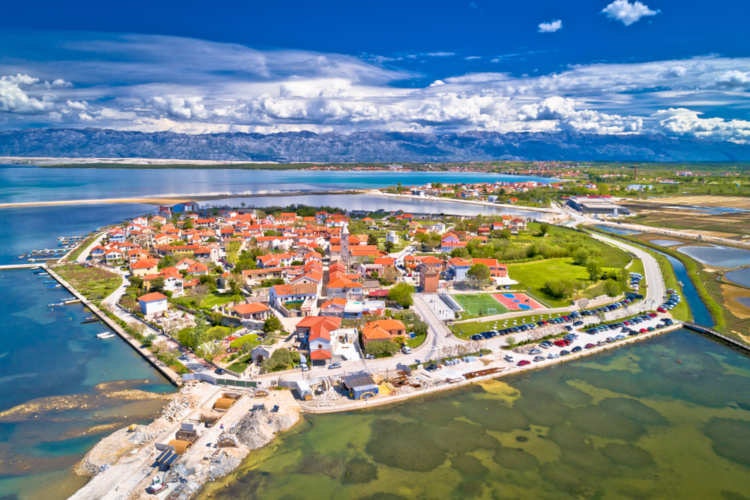 The unique town of Nin is worth the run

The route from Zaton to the mud field is exactly 5 kilometres. When returning along the same route, after about 2 kilometres be sure to hop over to the fortified historical centre of Nin situated on an islet. Three quarters of it is protected by the sea, with the remaining quarter being protected by marsh. But there are two bridges leading to it and a visit is definitely well worth it. Ironically it’s from inside this fortified islet town that you’ll come under a barrage of attacks, but just those of temptation from the countless magical cafes, pubs and ice cream parlours. Even lovers of ancient monuments will come into their own. 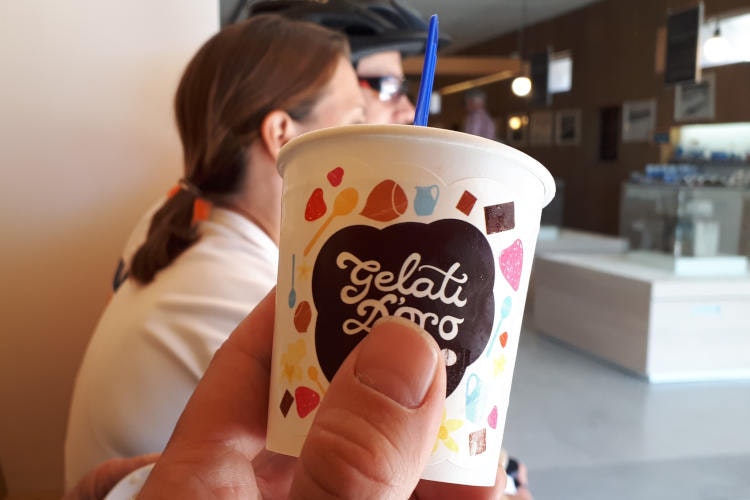 If you still crave more to discover, head out of Nin about one kilometre northeast along Highway 6004. There you will find the Salt Museum. In the souvenir shop you can buy a wealth of different packages containing various types of local salt, and in addition you can refresh yourself with a truly luxurious local specialty - salty ice cream. 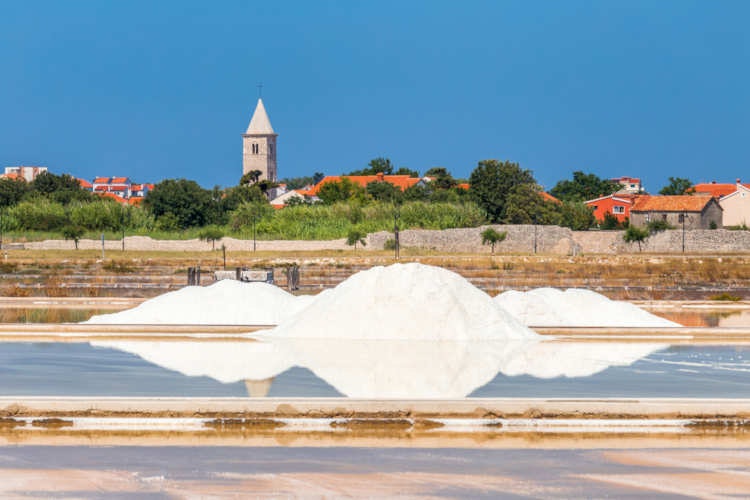 Nin has a long tradition of salt mining

The Roman emperors already had salt on the table and the Romans paid their soldiers this mineral as a reward at a time when salt was equivalent to gold. Did you know that this payment was called a “salarium” which is the origin of the English word salary? 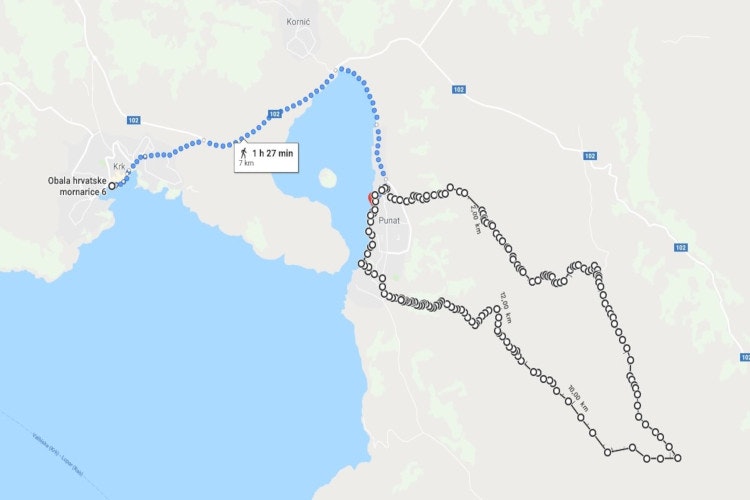 The easy route from Krk to Punat is marked in blue, an additional route for experts in black

If you decide to visit the northernmost of the great Croatian islands and you can anchor in the town of Krk of the same name, then grab the opportunity for a run. Through the historic centre, head northeast and along the main road (Ulica Narodnog Preporoda) up to the D102, which you’ll only crossover, however, to get to a fairly luxurious cycle track, which basically reaches the next port city of Punat. Here your cross-country journey can end (after 7 km of stunning views, slightly undulating terrain) for example in some local restaurant. That would be the easy variant. 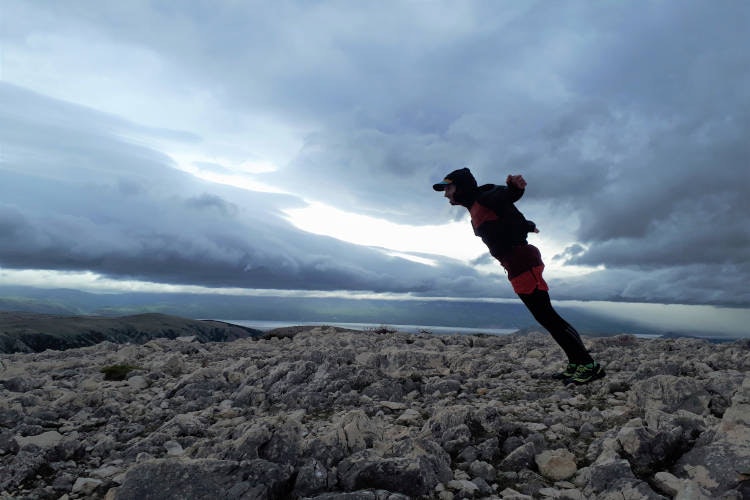 The wind really blows on top of Obzova

More extreme runners won’t stop at an attractive seaside town but plow on further upwards. From the main road turn left, almost directly east. The sign will point you in the direction of the Way of the Cross, which you will also follow. But you’ll bear your own cross far beyond the contour lines. Once the coarse gravel road connects to a better paved road, continue to the right on the worse of the two. The originally easterly direction begins to turn southeast. At about 300 metres you’ll get to the bike path and quickly turn off it further up to the left. Nothing better than broken rocky roads awaits you from now on. At the crossroads where the slope begins to become somewhat moderate and the road straightens, turn sharply to the south and push your way to the ridge. 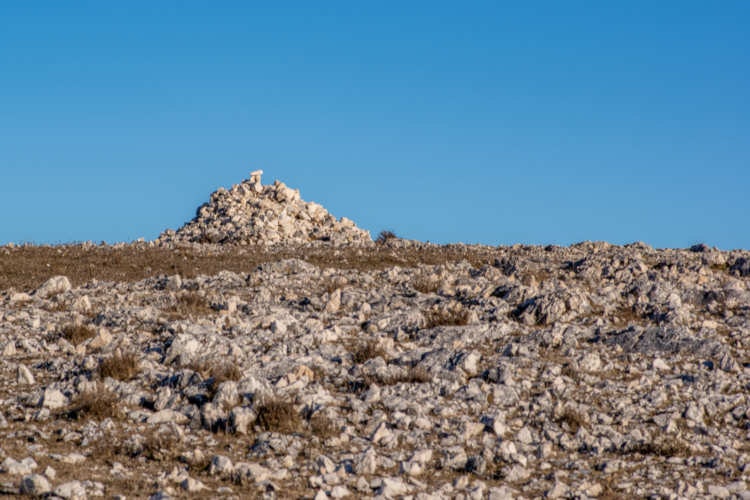 The first summit, at which you come across is Veli Vrh (541 m). But it may still leave you cold, as ahead you will already see Brestovic (558 m) and Obzova (569 m), the highest peak of the island. We baptized it with the more derogatory name of "Kobzolu", because the wind was blowing with gusts of over 100 km/h. Still glad, we opted for the poorly marked retreat west, which suddenly turns to the northwest, so that it heads perpendicular to the contours and in its last third to join forces with the cycle path with the map marking MTB5.2. We agreed then that this bike trail is intended solely for those with suicidal tendencies. If you are lucky enough for a crew member to pick you up by boat from Punat, your journey is over when you return there. However, If you are returning to Krk, another 7 km awaits you, making it a total of 28 km.

Moderately difficult route
Up to the bedrock! Something for gourmets, beer drinkers and hill lovers 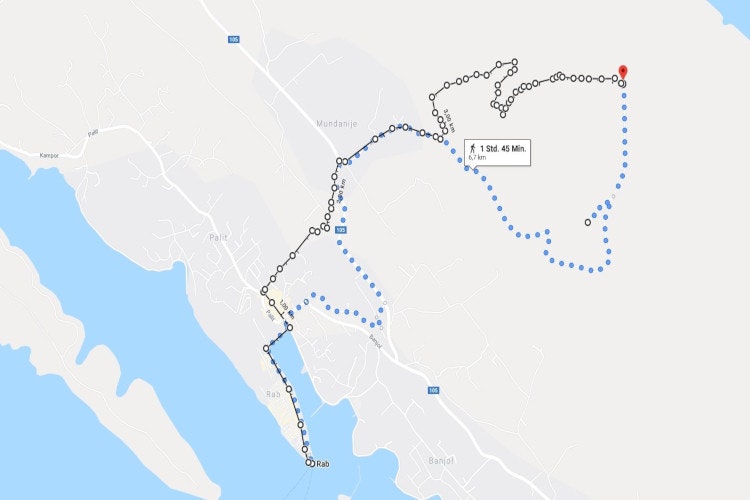 The route up is marked in black, down in blue with a distinct detour to a picturesque restaurant

If you ever find yourself on the island of Rab, or in the marina of its capital, don't hesitate to go for a fantastic run not only for the amazing sea views dotted with the white triangles of stretched sails, but also for the fresh sea breeze and the ascent to the highest peak of the island. All this can then be spiced up with a stop-off in the garden of a terribly kitschy pub that you’ll undoubtedly fall in love with.

It is here on the island of Rab that you can smell the ancient roots of human running. Ancient man also ran, but not like us. He didn't run for fun, he ran because he had to. Chasing the food that ran from him, or running from the predator, so as not to become food himself. As a reward, nature gave him endorphins, the hormones of happiness, and, in the first case, a nice full warm belly of food. 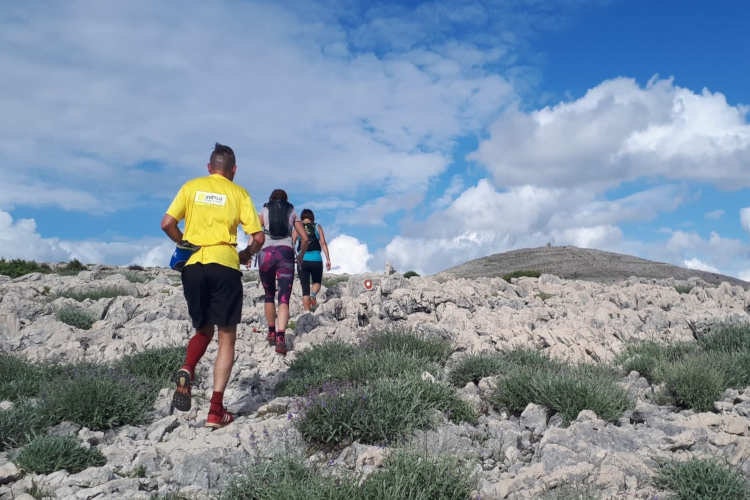 The way to Kamenjak is certainly not the easiest

You’ll need to use this kind of basic human desire to cover the cross-country trek to Kamenjak. You’ll abandon all the conveniences of civilization to cross a steep hill over ever-deteriorating paths, by the time you get to the top, the trails aren’t even trails anymore. Recuperating at the summit will be just the beginning of better moments to come. 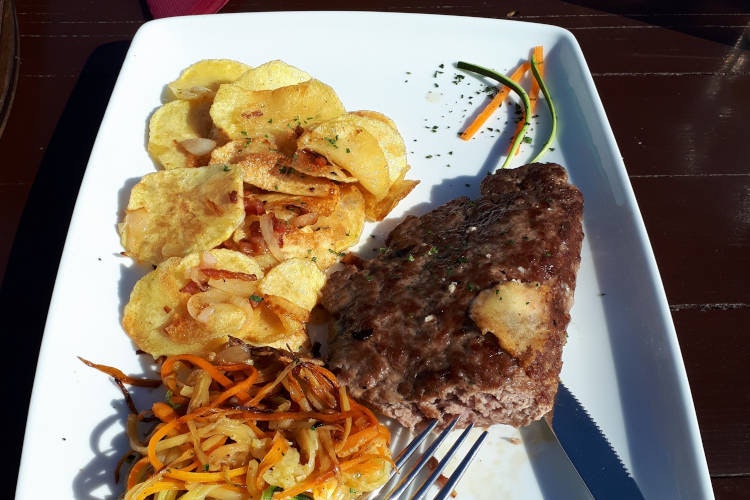 Pljeskavica at the restaurant Kamenjak was definitely worth the effort

The route from Rab to Rab via Kamenjak is also perfect using an alternative route. First there’s the grinding 5 km almost totally uphill, with its climax at the peak and then just a sweet six-kilometer run packed full of stunning views, which will certainly be enhanced by a quick detour to the restaurant Kamenjak with a superb lookout terrace. The traditional Pljeskavica here is the best we’ve tasted in the whole of Croatia. The classy waiter didn't have it on the menu, but he responded promptly to the inquisitive Czechs: No problem! The sparkle of the draft beer with the setting sun as a backdrop was amazing ... We all carried that sparkle the whole way back down to the ship. 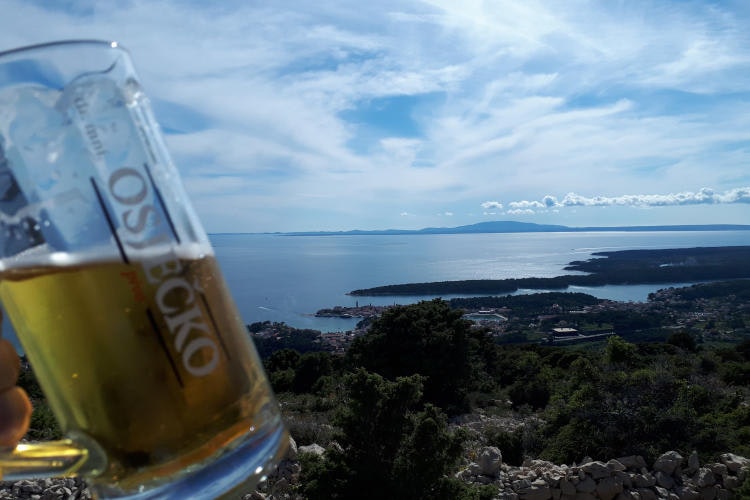 Sparkle in your eye, wind in the sails!

Terrain: demanding ascent in the first half, pleasant, but difficult in places, descending in the second half
Total length: 13 km (6 km up, 7 km down via the restaurant)

With running is the same as with a dog: If you want to run, you’ll always finds a route and a way. Perhaps this is true even more so on the Croatian islands. You can always find a side road, a mountain path that takes you to the hills or to a deserted bays or forgotten lighthouse. It won’t always be easy, you shouldn’t be afraid of a bit of hard work. But do not yachtsmen, sailors and runners all have this in common? If they were afraid of exertion, they probably couldn't do what they had become so passionately addicted to.

Do you want to spend your sailing holiday even more actively? Try a holiday in the spirit of Run & Sail! Find the best boats for such an opportunity with us!
Find a boat

Looking for a boat? Contact me, we'll run it together!