Sailing in southern Sardinia: a taste of the Caribbean

Southern Sardinia is a paradise for sailors. Take a look at our 7-day sailing route from the port of Cagliari and our picks for the best spots to stop along the way.

Tired of Croatia and looking for a new challenge? — the wild and wonderful Sardinia is just for you. Let’s plan a sailing route together around southern Sardinia, setting off from Cagliari and stopping off at numerous enchanting spots along the way.

Is Sardinia actually a remnant of mythical Atlantis? We’ll never really know, but one thing is for certain — its wild and magical atmosphere will be an unforgettable experience that will stay with you forever. Look forward to a thousand shades of turquoise, karst caves, wild horses, flamingos and the ancient Nuraga inland!

Sailors will fall in love with the southern coast of Sardinia. More rugged and greener than the north, it offers countless beautiful sandy beaches with a Caribbean-like vibe and is also not so crowded in high season. 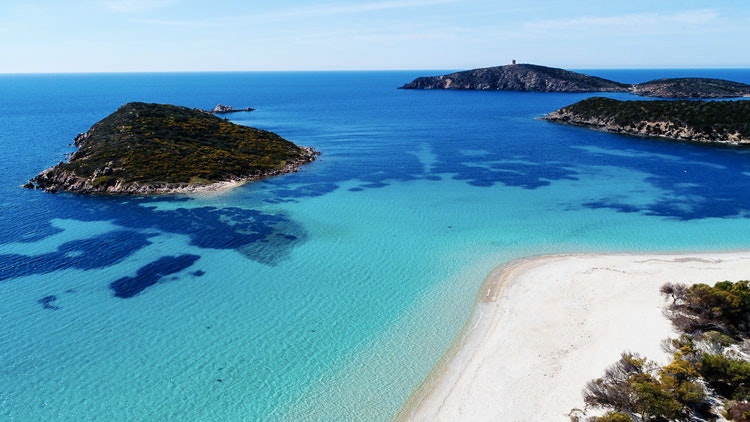 So where to head? Try a leisurely and interesting route from the charming Cagliari to the most beautiful spots in southern Sardinia. You’ll get to see beautiful beaches, salt pans, islands, fishing towns and plenty of wildlife.

Cagliari, Sardinia, ItalyFrom Cagliari, you can go the other side and continue to the Capo Carbonara Marine Park, with its incredibly diverse underwater life and a freshwater lagoon inhabited by flamingos.

Route 2 — alternative leg of the voyage to Capo Carbonara Park

Cagliari and the Gulf of Cagliari

The labyrinth of alleyways in the charming old town will lead you up the hill to the high citadel. Don’t miss the imposing Roman amphitheatre from the 2nd century AD, where you can still see the remains of rows of seats, underground passages and animal pits.

The warship Romagna, carrying a valuable cargo of weapons and fuel hit a mine in August 1943 and split in two. Both parts of the ship sank to the shallow sandy seabed. The parts lie approximately 30 to 40 metres deep and 800 metres apart.

More experienced divers can really explore this extremely well-preserved wreck, home to giant groupers, rockfish, rays and countless small fish. It is a unique and spectacular sight to see the huge, perfectly preserved rudder and propeller.

Do not take the boat to the port of Perd'e Sali (between Cagliari and Pula) and the port of Cala Verde, which do not have enough depth for sailing boats.

YACHTING.COM TIP: Wondering where else to find great sailing in Italy? We've selected the 15 most beautiful places to sail in Italy.

Miles of beaches stretch out to the west of the town of Chia, protected by Cape Capo Teulada. The sand forms charming white dunes and you can spot flamingos in the freshwater lagoons.

One of the most beautiful beaches in southern Sardinia is undoubtedly Cape Teulada, which lies opposite the island of Tuareg. The snow-white sands awash with turquoise sea is enticing for swimmers and snorkellers. 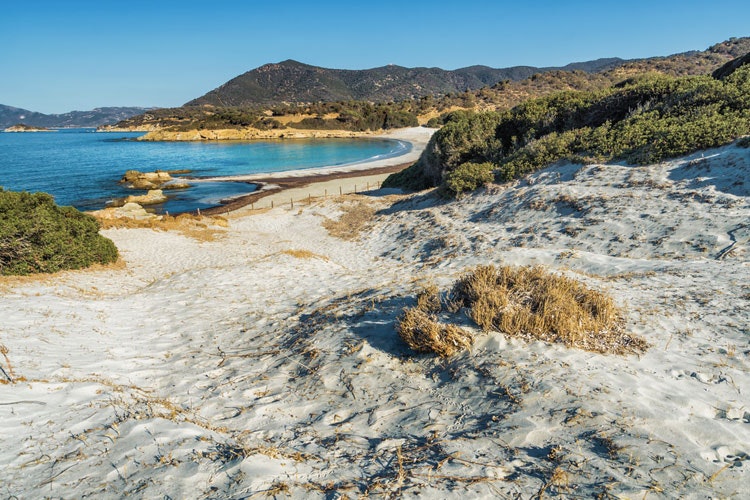 A rocky island with salt pans extending northeast to the mainland opposite. There are 3 ports to anchor at here — Calasetta on the northwest tip, Sant'Antonio in the east, and Port Ponte Romano on an artificially built mainland.

When navigating in bad weather, take care at the northeast of the island and the Cape of Sperone, where there is a strong swell in the sea. Also, watch out for rocks between Capo Sperone and Vacca Island (Cow).

The wild volcanic island of San Pietro breathes an ancient history. It was named in honour of Saint Peter himself, who is said to have been shipwrecked here. The ancient Romans called this island the Island of the Hawks, after the birds of prey that nest here.

Use one of the numerous small coves or bays as a pleasant daytime anchorage, depending on the direction of the wind. When manoeuvering, take care of the many small reefs and rocks that surround the island. 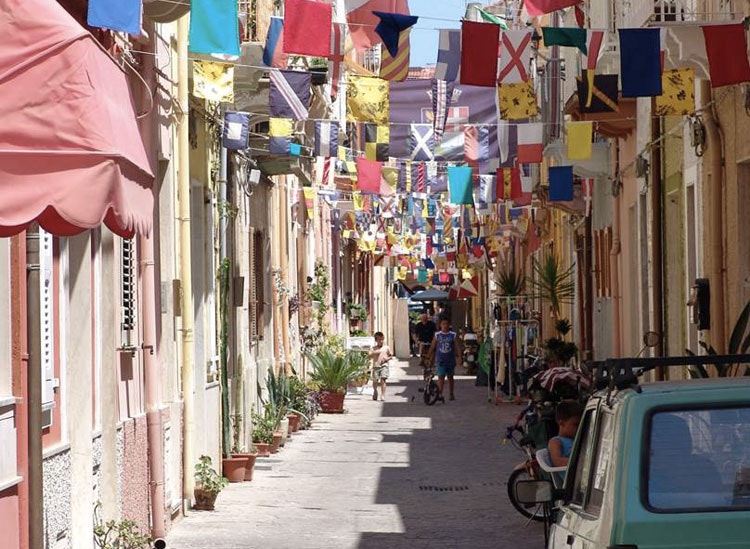 The cliffs on the southwest coast rise up to 40 metres high, while the east coast is sandy and low. The stunning blue sea and amazing beaches line the entire island, with beautiful hidden caves in the northwest.

In Carloforte, there are five marinas and harbours as well as a town pier that's free of charge. The town centre is really beautiful. The locals are of Venetian origin and the streets leading to the main boulevard on the waterfront are lined with elegant pastel-coloured houses with wrought-iron balconies.

Carloforte is also famed for its fishing, especially traditional bluefin tuna fishing. The Giro Tonno Festival is held every year, and in the local museum, you can see an exhibition of this, by today's standards, rather cruel fishing method. 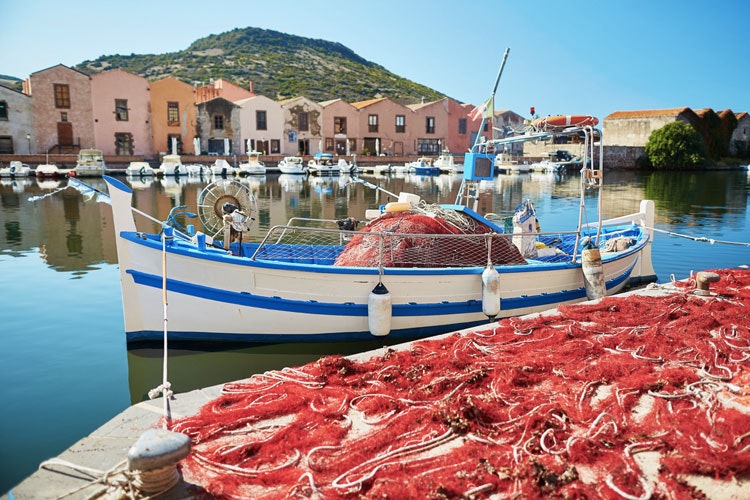 A remarkable lagoon consisting of freshwater lakes and saltwater lakes, which dry out in the extreme heat, covering them with a layer of salt. The lagoons are inhabited by hundreds of diverse bird species, the most famous and the elegant being pink flamingos. 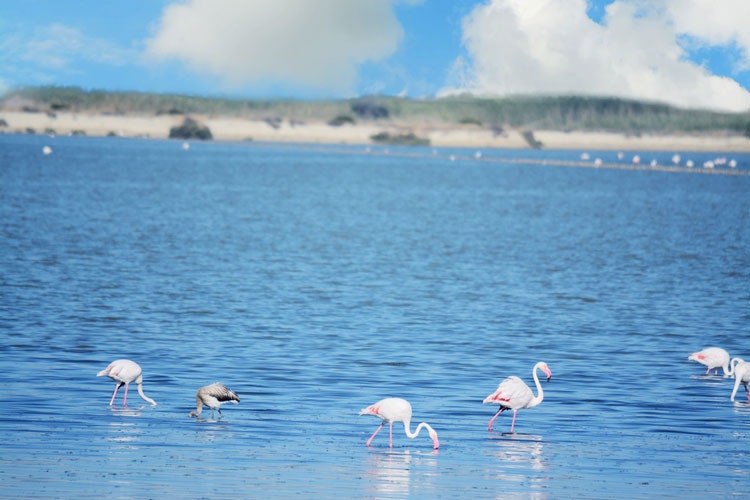 Lovers of snorkelling and diving alike will be captivated by the marine reserve of Capo Carbonara. Here, you will be amazed by the beautiful sandy beaches and incredibly varied underwater life. Giunco Beach at the very south of Capo Carbonara is beautiful and also acts as a dam separating the sea from the neighbouring lagoon of flamingos.

The south coast of Sardinia is very windy. If you are patient and wait for more stable weather conditions, you’ll find many beautiful towns, interesting islands and countless safe anchorages.

As far as winds are concerned, the prevailing winds are northwesterly Mistral winds, but SW are also common, reaching 5 to 6 Bf in the Gulf of Cagliari and off the island of Sant' Antioco. There are also frequent storms here, but these do not usually last more than 2 or 3 hours.

For the rest of the year, the wind is mainly from the north-east and north-west, but southerly winds also occur. With strong winds from either direction, the sea is rough at Cape Sperone and Cape Carbonara.

Choose a boat in Sardinia

What sails do charter sailboats have?

Types of anchor on a yacht

Top charter innovations in the 2022 season

What sails do charter sailboats have?

Types of anchor on a yacht

Top charter innovations in the 2022 season

Explore the most beautiful and untamed places in Sardinia. Enjoy fantastic sailing, fishing, scuba diving, and delicious cuisine with an African twist. And, you'll be in reach of Neptune, the god of the seas because, according to ancient legend, this is where he resides!

Want to sail in Italy?

Interested in sailing in Sardinia? I can help you find the perfect boat.

By air: the quickest and most comfortable way to get to Sardinia is, of course, by air.

Car-ferry combination: if for some reason you decide to go by car, you won't regret it. You will appreciate the comfort and flexibility of the journey. In addition, you can use the car to explore the beauty of Sardinia. Ferries to Sardinia depart from the ports of Genoa, Livorno, Civitavecchia and Piombino. However, the most common ferry route from the mainland to the south of Sardinia will be Naples — Cagliari. The price of the ferry depends on the day of the crossing, whether you sail day or night, if you want a cabin, the type of car you want and also the advance in which you book your ticket.

If you're sailing from Cagliari on your cruise and you're carrying your diving gear, stay a while in the Gulf of Cagliari. Plus, if you're a history and WWII buff, you've found yourself in perhaps the most renowned site of its kind. Indeed, many warships and cargo ships that were pursued by British U-boats found their scrapyards here. The wrecks are usually well-preserved, at shallow depths and surrounded by colourful marine life.