Drinking and boating: what are the legal limits in popular sailing destinations?

"Down the hatch!", "Bottoms up!", "3 sheets to the wind" — alcohol has long been synonymous with sailing. But what are the realities of drinking alcohol on board? And what are the legal limits in different countries?
Published by Yachting.com - 10/30/2022

Did you know that up to 70% of maritime accidents and up to 60% of boating deaths (including falls into the sea) are caused by alcohol? No wonder, you need quick judgement and clear senses to drive a yacht. Of course, many sailors enjoy cruising with a group of friends and unwinding with a few beers. However, in some countries, it's probably not worth it. So, do you know what the blood alcohol limits are in popular yachting destinations and the penalties for sailing under the influence? Let's take a look.

Croatia and alcohol at the helm. What's the limit?

In ever popular Croatia, according to the Maritime Law (Pomorski zakonik), the captain and crew of a recreational boat, yacht or dinghy may not have more than 0.5 g/kg of alcohol in their blood while performing their duties on board. If the local police or coastguard measure more than this, you can expect the following penalties:

In addition, if the captain of a boat, yacht or dinghy is proven to be under the influence of alcohol or drugs, or even simply ill or exhausted, the authorities can remove them from their position as skipper for up to 8 days. And if this would deprive your yacht of the only captain on board, then the entire vessel would be banned for the same period. 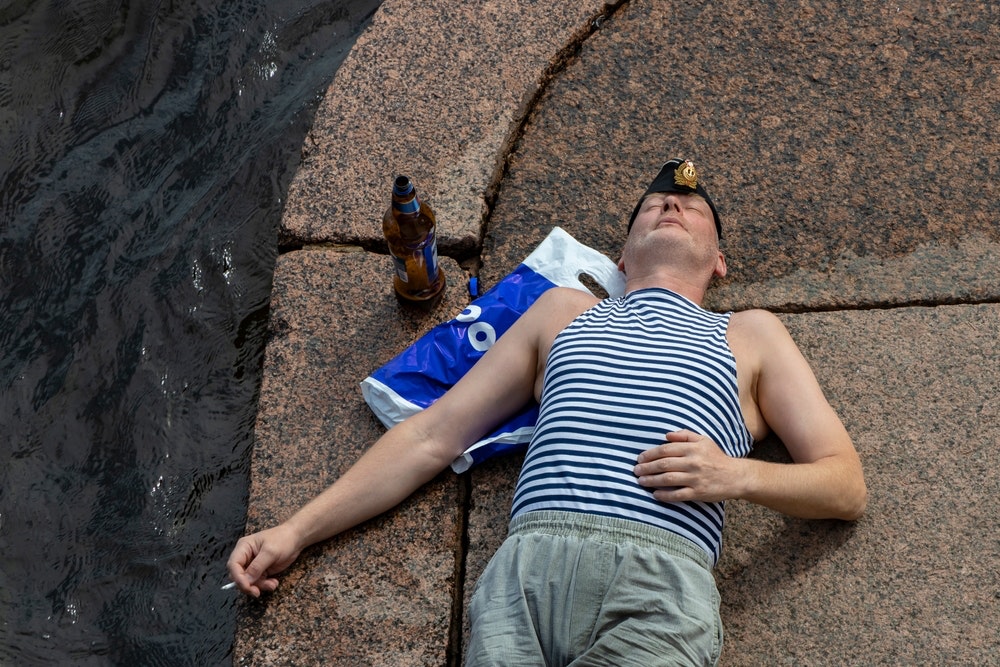 A drunk captain is incapable of dealing with crisis situations.

Italy: what is the alcohol limit on board?

In Italy as well, the alcohol tolerance on a recreational boat is up to 0.5 per mille, although in the event of an accident, even a small amount of alcohol is considered an aggravating factor. Anyway, according to the Italian maritime law Il Codice della Nautica, anyone who drives or steers a boat and has more than 0.5 per mille of alcohol in their blood can be subject to the following penalties

*If a drink-driving accident or incident occurs, the fines are double.

The captain is liable in all circumstances

Although the Croatian Code mentions a tolerance of 0.5 per mille for the captain (and all crew members), the skipper is always responsible for what happens on the boat, even if he is not actually steering the boat. For example, even if someone falls overboard because they've had too much to drink.

The penalties for personal injury, negligence or death are similar to those for a car crash. If, for example, a crew member were to die (perhaps falling overboard and drowning), the captain would have to answer for it in court. And any misconduct on their part, including blood alcohol content, would weigh heavily against them in their eventual trial. Most experienced skippers therefore unanimously agree that when they are sailing, they simply don't drink. Commonly, they cite one or two beers a day as the maximum to keep their senses and reactions sharp.

YACHTING.COM TIP: Man Over Board (MOB) is something no sailor wants to experience. But when it does happen, you need to be able to react quickly and correctly because lives are at stake. Both the skipper and crew are under enormous stress the moment someone falls into the sea, so it is crucial to know the different steps to take and understand your role during a rescue operation. Review the rescue procedure and what you need to know and do in our article — Man Over Board (MOB): a step-by-step guide.

Alcohol at the helm is an aggravating circumstance

At sea, you never know what might happen. Unfortunately, it is simply a fact that accidents do occur, both on the high seas and in port. Even a minor scrape to your hull or to the boat next to you must be reported to the charter company and the insurance company, and in more serious accidents the police. The police commonly give the captain a blood alcohol test and if positive, it is always considered an aggravating factor in an accident investigation. Even if the accident was not your fault. After all, it's not different to driving on the roads. 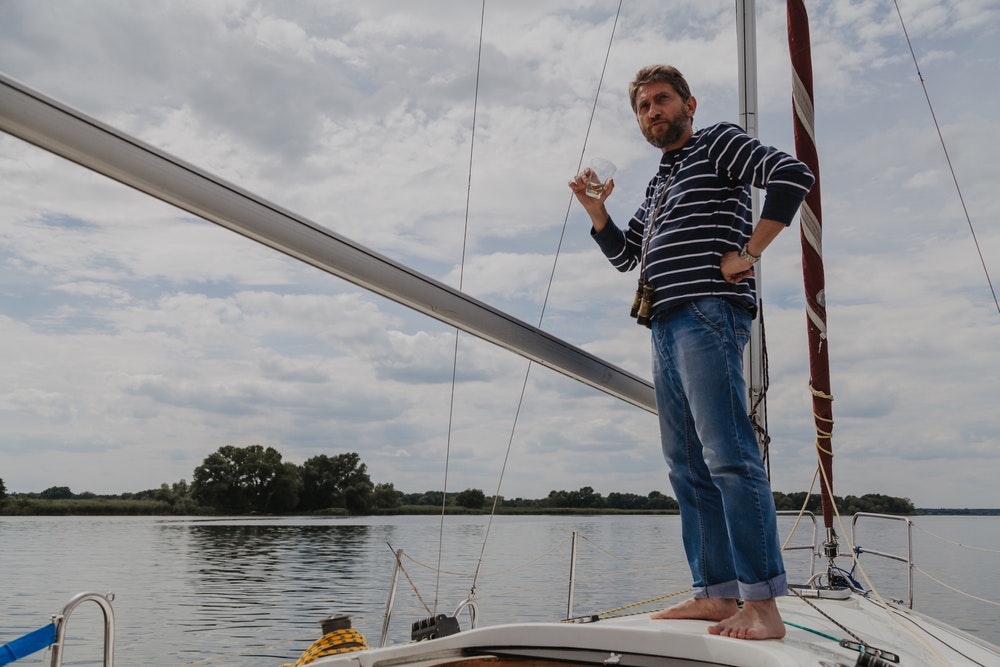 Insurance coverage issues in accidents under the influence

If it is proven that alcohol consumption was the cause of the accident, the insurance company may deny coverage (such as, for your security deposit). The maximum damages in such a case may not be limited to the amount of the deposit or the cost of the entire boat. For example, if you hit a luxury mega yacht while drunk, causing a hole in its hull, the amount of damages can be staggering.

Partying at the marina

Most charter companies we've approached about the issue of drinking on board strongly advise their clients to forget about alcohol whilst sailing or to leave the party until the evening when the boat is safely moored or tied up in port.

Although we also like to have a few drinks, please still keep in mind the need for some of the crew (the captain anyway) to be alert and clear-headed at all times. You never know if you'll have to make an emergency departure or deal with an unexpected situation, such as a broken anchor, wind carrying you onto a rock or a sudden storm.

YACHTING.COM TIP: Parties on board a boat are fantastic and an integral part of the summer experience. But you always have to keep in mind that you're at sea, which has its own constraints and risks. So, how can you have a great party without putting the crew at risk? Check out our article — How to enjoy a party on a boat: 10 tips to keep your crew and your boat safe.

Checks at sea and inland

Quite honestly, there may be checks at sea, but they rarely happen. However, that doesn't mean that you should exploit the fact. In Croatia, for example, it is mandatory to undergo a breathalyser test and, if the authority requires it, a urine sample and blood test. Should you refuse this, samples can be taken by force.

The art of (not) sailing

If you've had a heavy night of drinking on the boat or on land until the early hours, it's always better to stay in the bay a day longer and sober up. Plan your itinerary so that you have one day "free" for just such occasions. As we mentioned above, Croatian maritime law does not only mention alcohol and drugs, but also fatigue or anything else that prevents the captain and crew from sailing safely. And as alcohol increases the likelihood of seasickness, your crew will thank you for a day in port. 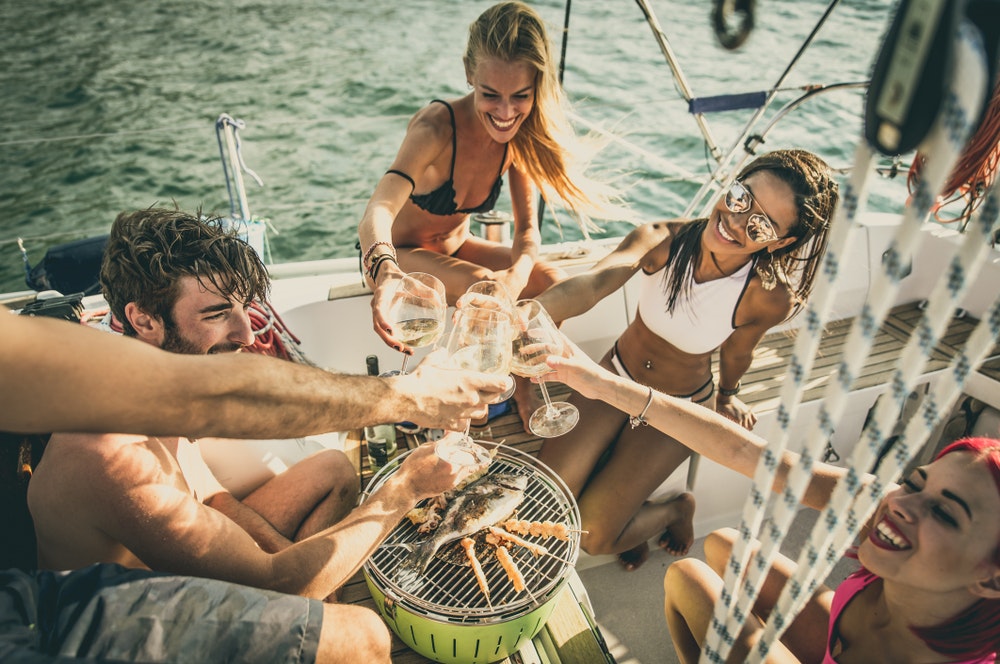 In port, the same rules apply. Even there, things can happen to drunken crew members.

However, a distinction must be made between boating at sea and on the inland territorial waters of a country. While at sea there is a special law that covers driving a boat (in Croatia this is a maximum of 0.5 per millilitre in the blood), in territorial waters (rivers, lakes, dams, ponds...), it is the same law that applies to road traffic that covers this. In several countries, there is a zero-tolerance policy for alcohol on the road, which then applies to boats or other vessels inland.

In France, it is possible to get behind the wheel with 0.5 per mille of alcohol in your blood, so you can count on the same tolerance on the Loire River or the popular Canal du Midi. The same amount of alcohol is tolerated on roads, canals and rivers in most European Union countries.

YACHTING.COM TIP: On inland waters, blood alcohol checks are much more frequent than at sea. Most domestic boaters and captains of small vessels will tell you that local boating authorities carry them out regularly during the season.

Whether you're a beginner or an experienced captain, we can arrange a boating holiday for you. Contact us. 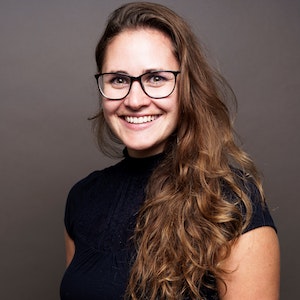 FAQs: Alcohol and boating, what are the rules?

At sea, a special laws apply. In the popular destination of Croatia, it is 0.5 per mille. On inland waters, the level is the same as for driving a road vehicle.
Yes. If the captain has alcohol in their blood, in the eyes of the law they are much worse off if anything happens on the boat.
Yes, but in practice checks at sea are not very frequent. But an authorised person can ask you to take a breath test, a blood test and to give a urine sample. In some countries, you may even be forced to do these things. Blood alcohol checks are more common on inland waters.