Snorkelling and sailing: what inhabits the Caribbean coral reefs?

What marine life is there to discover beneath the surface Caribbean waters? What can you get up to close to and what should you watch out for?
Published by Yachting.com - 10/07/2022

If you're setting course for the Caribbean, be sure to pack your snorkel, fins and mask. Even in shallow waters, the underwater life here is fascinating and varied and can be enjoyed without needing scuba gear. The Caribbean coral reefs are home to a variety of colourful fish and animals, including manta rays, sea turtles, and various species of shark. Just find a spot to anchor where waters are shallow and clear, and start exploring. So, what can you expect to encounter on your sailing adventure?

The Caribbean is a paradise for snorkelling, although worse for mooring

What's the best way to anchor a boat when snorkelling?

Majestic rulers of the Caribbean

True giants sweep through the Caribbean and an encounter with them is an unforgettable experience. This is something not found in the Mediterranean.

Encountering a manta ray is a dream for all who dive. And in the Caribbean, coming across this legendary ray is highly likely. These giants drifting around you with their wing-like fins is absolutely breathtaking. An experience of a lifetime guaranteed!

The manta ray is one of the world's largest rays. It is not dangerous to humans, although in ancient times, legends spread of the manta who pulled a sailor into the water and hugged its fins so tightly around him that it ended his life. Fishermen also nicknamed it the “devilfish” because of its atypical shape. 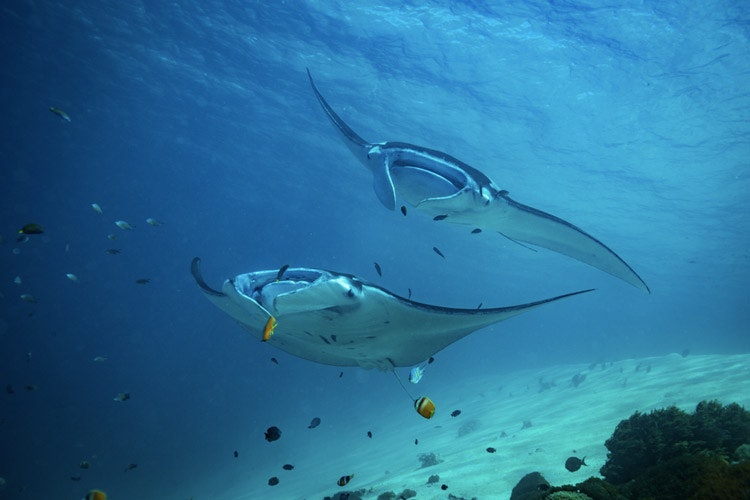 A manta's movement is bird-like

Where to look for mantas? They can be found around Mexico, Tobago, Saint Kitts and Nevis or the Cayman Islands. Larger populations live outside the Caribbean — on the African coast, the Maldives or Bali. Around the reefs, it is more common to encounter the similar spotted eagle ray, which, unlike mantas, has a pointed head and is smaller.

The West Indian manatee, sea cow or siren weighs up to 600 kg. But it is a peaceful tame animal and you will often find it on the bottom grazing on seaweed. It stays there for up to 12 minutes, returning to the surface to catch a breath. Join them, it's a beautiful experience! 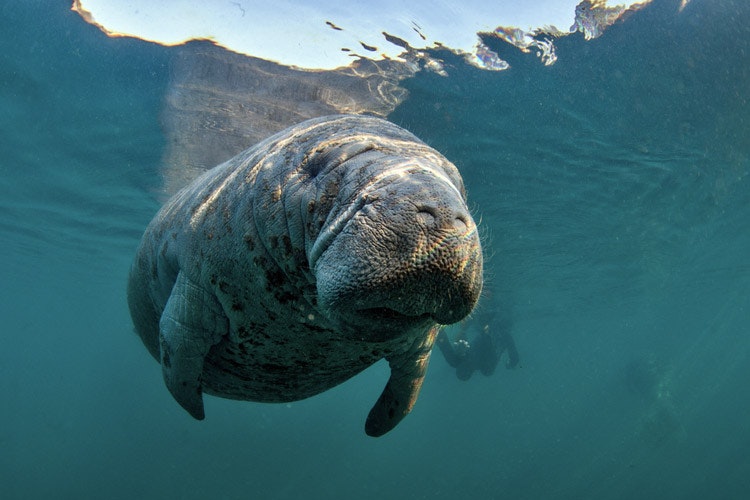 Encounters are rare and exciting. When one finally emerges before you, your heart will literally skip a beat at their sheer enormity. This clumsy giant does not attack, but it pays to maintain a safe distance, although this whale might not even notice you. Reaching over 12 metres in length, it is the largest fish in the world. 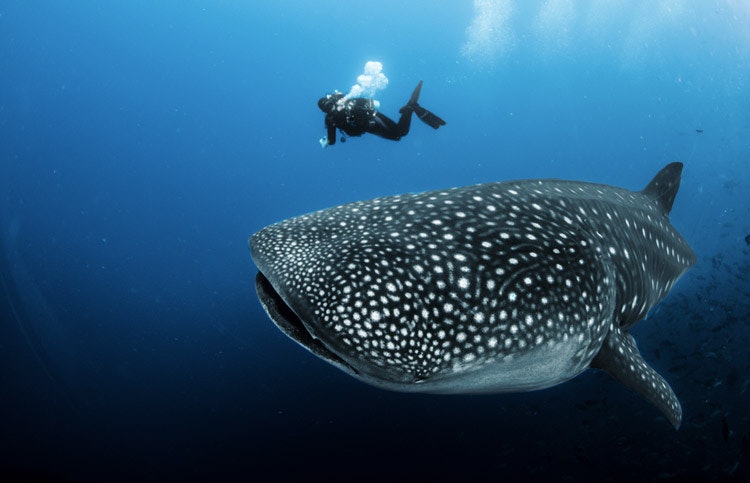 The majestic and huge whale shark

In the Caribbean, there are other sharks to be discovered but none are too dangerous. A blacktip shark can sometimes be found basking in the shallow waters off the coast or heading to the reef to hunt for mackerel. The nurse shark or Perez shark, likewise, do not attack but are still considered potentially dangerous.

Where to find sharks? The most famous location, where many shark myths originate, is the archipelago Jardines de la Reina in Cuba. Even in shallow waters, whale sharks can be encountered on the Mexican Caribbean coastline. At Cape Catoche, the northernmost outpost of the Yucatan Peninsula, a large herd gathers each year.

YACHTING.COM TIP: Join us as we explore the mysterious world of sharks. Overcome your fears and learn to love them instead!  And learn how to swim among them without risk.

Dolphins just love sailors. Their cute smile, graceful form and movement make the yachting experience even more magical. Dolphins have been faithfully accompanying ships since time immemorial. And why not? Being in the ship’s wake seems to save them energy.

Dolphins are very intelligent, able to cooperate well and effectively and offer assistance. They have well-developed hearing and constantly communicate with each other. Dolphins can also interact with other animal species and often do so with humans. 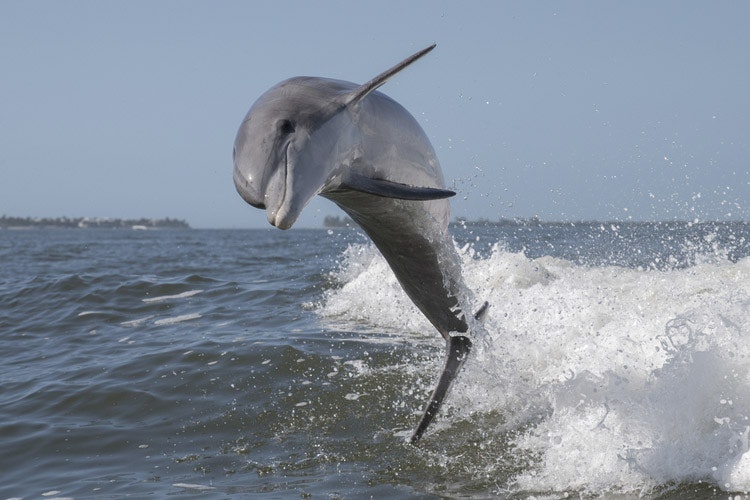 Hawksbill and green turtles can be found on many reefs. A large number of turtles live on Barbados, Dominica, but can be encountered across the whole of the tropical Atlantic. 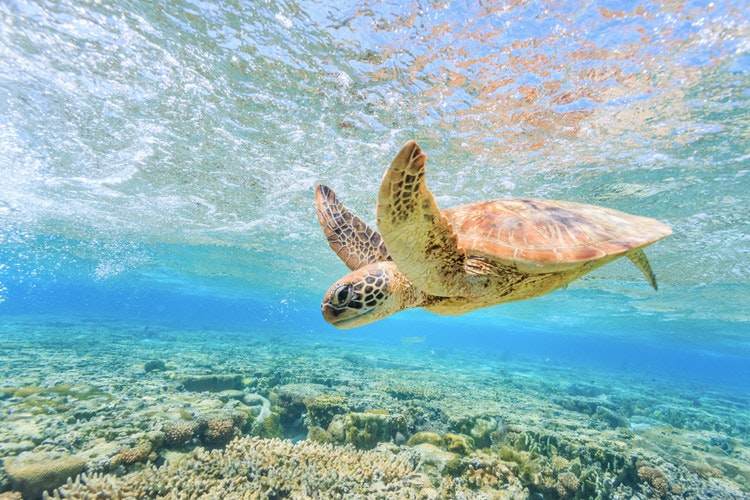 Sea turtles are omnivorous, but you don't have to be afraid of them

In the area around the Caribbean reefs, numerous species of this bizarre eel can be found. They peek out of hiding places, open their mouth full of crooked sharp teeth, and when disturbed, zip off surprisingly quickly to their next shelter, with a snake-like motion. They look dangerous, but if you keep your distance, they will never attack. 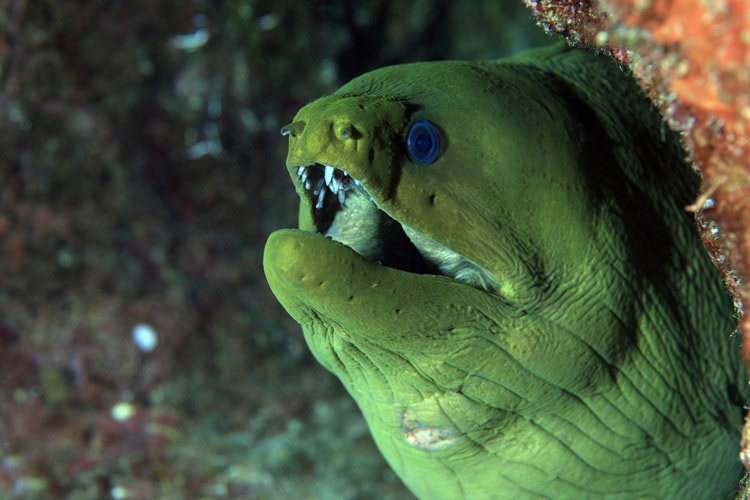 Green moray can reach up to 2 metres

A slender fish with large eyes, moves in large flocks and come to reefs to hunt. Not observed just snorkelling on the reef but also occasionally on the open sea. A flock of barracudas is impressive. When setting up to attack, it's a spectacular show. 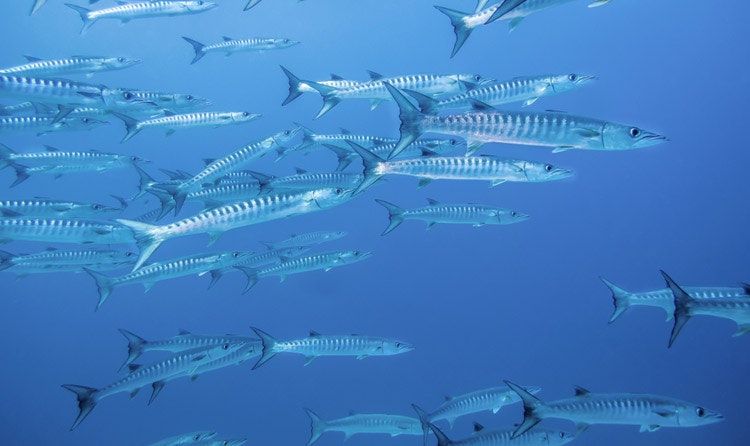 Flock of baracuda on the hunt

Groupers of different colours and shapes look lazy and peaceful, but they are highly predatory fish. They are normally afraid of people, but in places where they are accustomed to them, they come out peacefully. The largest groupers reach lengths of over a metre. 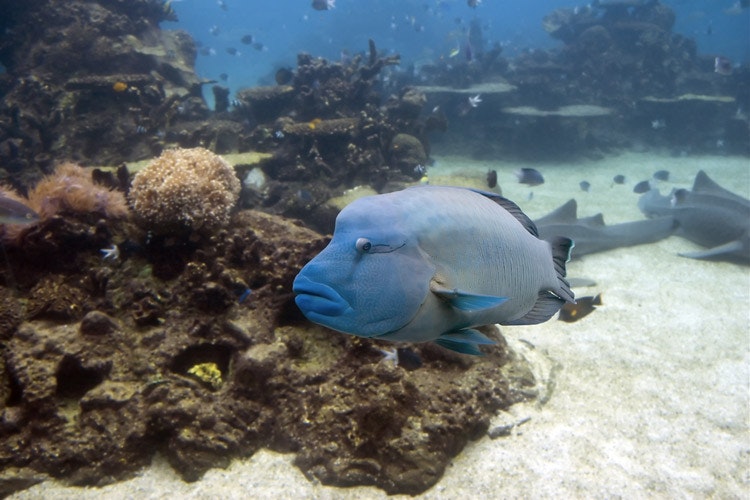 Grouper resting on the reef

The coral and anemones bustle with colourful little fish –⁠ butterflyfish, chromis, clownfish, angelfish and wrasse. Elegant butterflyfish often live in pairs and remain faithful partners. Loved by divers of all generations, the photogenic clownfish can be found resting between rippling anemones.

In the Caribbean, it's also possible to encounter the mysterious seahorse and a number of small and larger crustaceans. 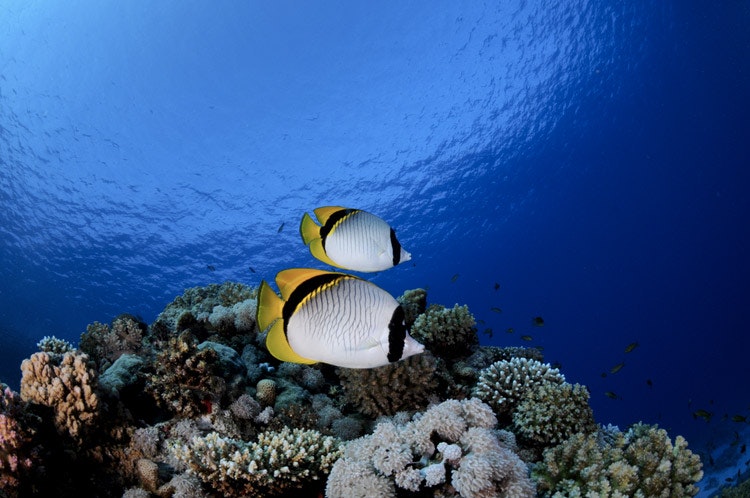 Butterflyfish on a coral reef

Life at a cleaning station

Various fish and shrimp also serve at "cleaning stations". Fish, turtles and mammals arrive there. Small fish remove parasites from the wounds that the fish suffer in battle and destroy the dead skin. Even predators are forgotten for a while, and the little fish are not even afraid to enter a wide-open mouth and clean the inside of the gills or the oesophagus. 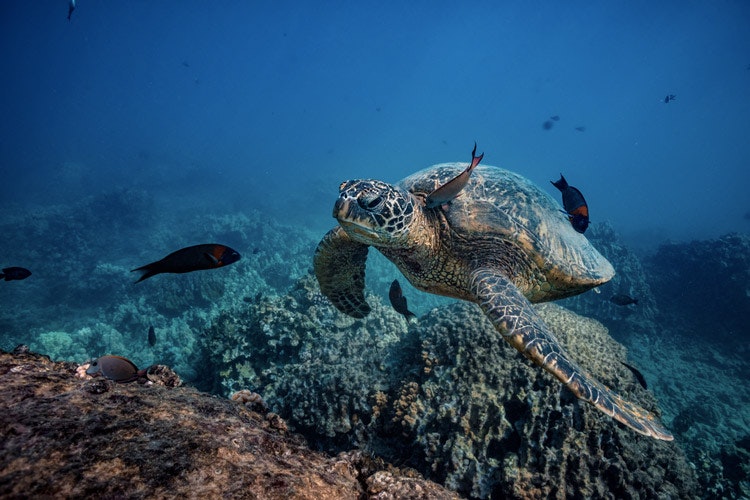 Turtle at a cleaning station

Danger among the corals

Amongst the corals, some poisonous or indeed dangerous animals are to be encountered that are worth looking out for.

A beautiful fish with a fan of striped spines, is tempting to touch to the uneducated diver. However, this can be extremely painful and indeed dangerous. Poison in the spines and fins causes sweating, severe pain, nausea, cramps, and sometimes even breathing difficulties. 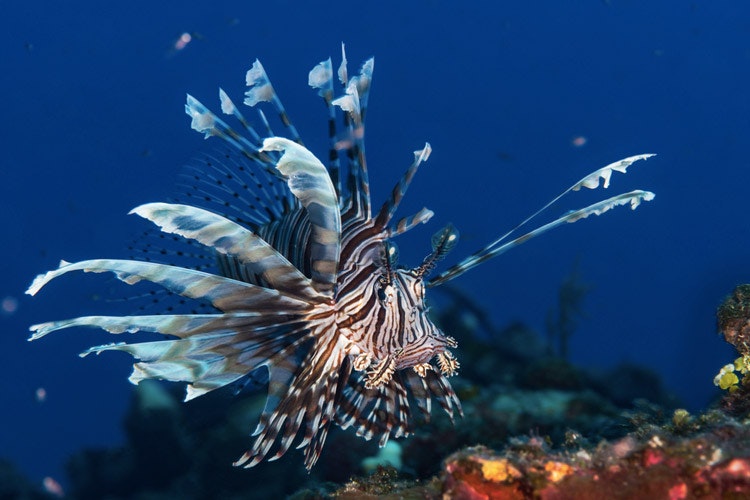 Pufferfish are notorious. They can blow up like a football, and their skin and intestines contain an aggressive poison. They are well-known in Japan as fugu. So why do they inflate? When they feel threatened, they swallow water, filling a sac near their stomach. Besides the poison, divers can also be bitten by them.

The typical rugged-looking rockfish can easily blend in with a rock wall or the reef. It has poisonous spines and is easy to overlook in between algae or coral. 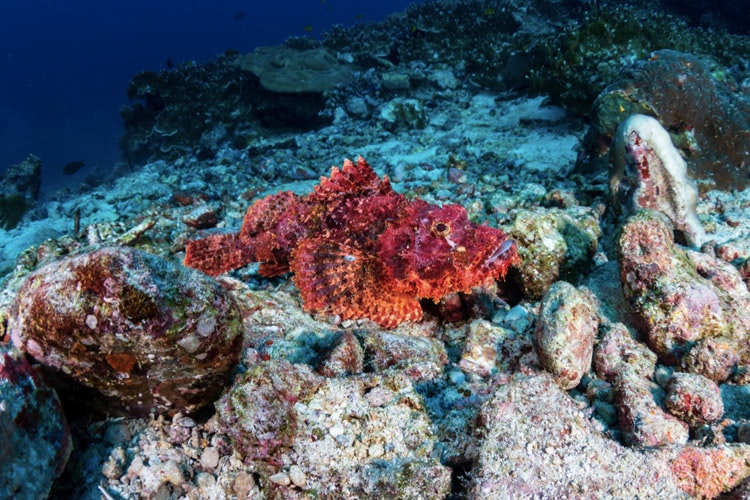 When snorkelling with a camera, beware, some fish (barracuda or moray) may cause a rash to develop. Many a curious snorkeller has felt the sharp teeth of the barracuda.

YACHTING.COM TIP: Snorkelling in the Caribbean isn't the only way to see the wonders of marine life or experience spectacular underwater formations. Do you enjoy discovering life beneath the surface? Read our article on the 7 most beautiful places to go snorkelling in Croatia. 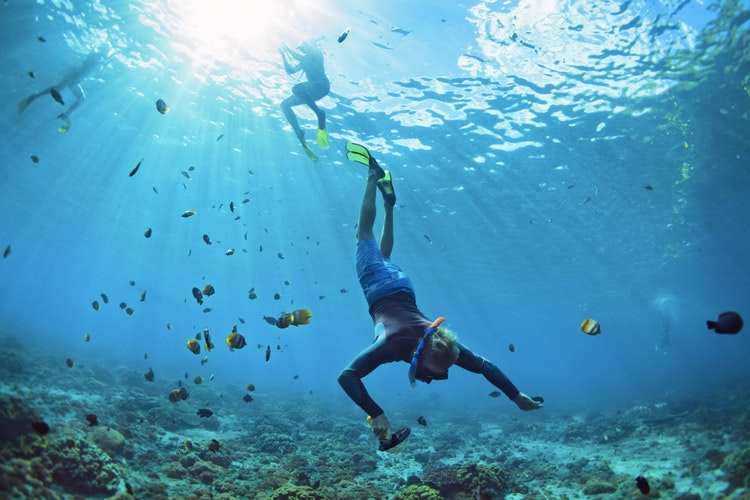 Snorkelling in the Caribbean

How best to observe the underwater world?

Choose a boat in the Caribbean

I'll help you choose the perfect boat for your Caribbean vacation

FAQ Snorkelling in the Caribbean

Beneath the surface you'll discover coral reefs full of colourful fish and other marine life, including manta rays, manatees, sea turtles, moray and various species of shark.
Beware of the poisonous wrasse, pufferfish or toadfish, which blend in with the reef are difficult too spot.

- Read the water, notice the currents and how the fish move. This allows you to predict how they will behave. Smaller fish hide from the currents in the reef which attracts predators.

- In the water, move carefully to avoid damaging the fragile coral. Be careful when kicking your fins.

- Try not to touch the coral. You can damage the protective layer or break it.

- Do not touch or move creatures on the reef. You could upset the amazing balance that exists on the reef or cause injury.

- Respect the sea life. Moving at a safe distance reduces the risk of being attacked or injured by venomous species..

- Resist the temptation to take a shell or coral away with you as a souvenir. Many species are protected by CITES and you risk huge problems at the airport.