In spring, a few years back, we set out on three Westerly boats for a sports cruise in Scotland. The voyage led us through the most beautiful places in the Scottish Isles and was a very powerful experience for all participants. Come live it with us!
Published by Yachting.com - 08/19/2022

In the second half of April 2012, our sports cruise took place in Scotland, attended by three Westerly boats from 36 to 41 feet. The voyage led us through the most stunning places in the Scottish Isles and it was a truly powerful experience for all participants. Come live it with us!

Sailing in Scotland is always a powerful experience for all who participate and this voyage convinced us all that Scotland is an incredibly fascinating and unjustly neglected sailing region. The route led us through the most stunning places in Scotland. 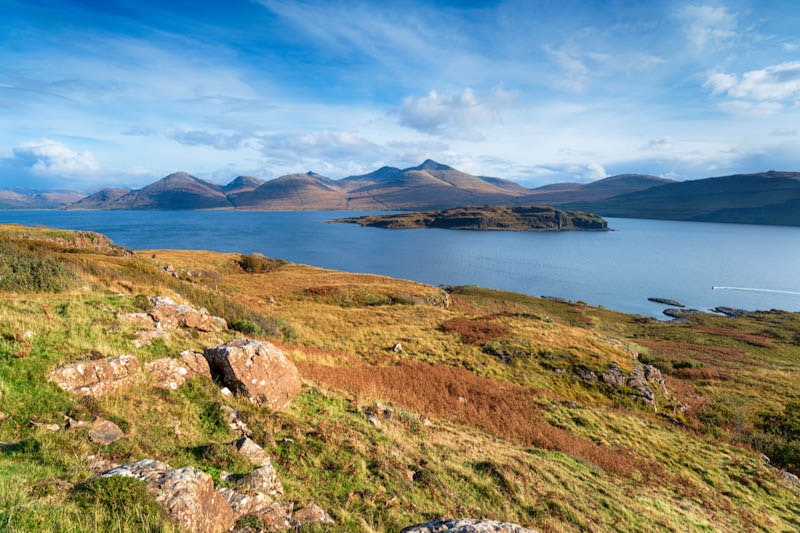 The forecast promised rain, rain and more rain. The rain alternated with sunshine and cold weather, but most of the time it was ruled by excellent visibility, which made the scenic beauty and ruggedness of the Scottish islands really stand out. The initial light breezes gave way to a powerful northerly storm in the second half, so we enjoyed some challenging and very cold sailing.

We set off from the marina at Dunstaffnage near Oban on the west coast of Scotland and on the first day of the voyage we headed to Duart Castle on Mull Island. We anchored in the bay and landed under the castle towering over the rocky headland.

By the end of April, the castle had already closed to tourists, so we just walked around and set off to the island of Islay which boasts eight single malt whisky distilleries. On Saturday we took part in a tour of the distilleries of Laphroaig, Ardbeg and Lagavulin, and, of course, a whisky tasting.

A visit to a 200-year-old distillery is both fascinating and informative. We learnt that the whisky on the island is smoky due to the use of peat as a fuel when drying germinated barley. In the Ardbeg distillery, the tour was made even more pleasant by an excellent guide. 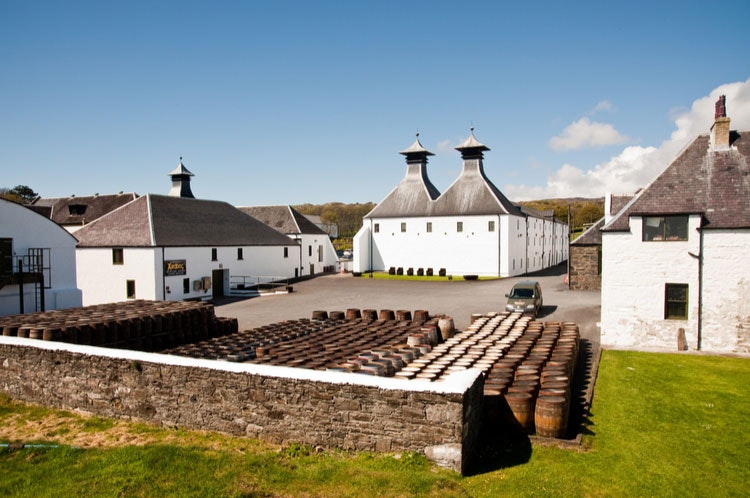 The entire tour was like a kind of cabaret. The guide was absolutely hilarious and her demonstrations clearly explaining the whole process of whiskey production were sometimes even a bit dangerous. For example, when she lit peat with a blowtorch in a wooden room.

At the end of each tour there was a tasting of different kinds of local whisky, explaining the differences between each. There are 3,500 inhabitants on the island of Islay and about 15 million litres of single malt whisky are exported every single year. 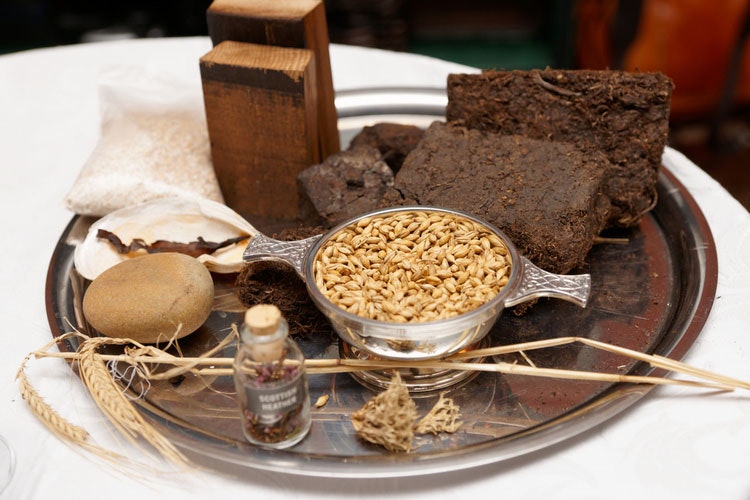 On the Saturday evening we sailed from Islay at high tide and headed towards the island of Mull to the small island of Iona, where the oldest abbey in Scotland is situated. In 563 the Irish monk Columba landed on this very island and began spreading Christianity.

The ancient Benedictine abbey has been completely renovated and has a truly magical atmosphere, with the church tower looming over the small island, being visible from quite a distance. The community of believers living in the abbey are from all corners of the globe. Of course, we can't forget that Iona is also home to a single-horned sheep, called Capricorn. 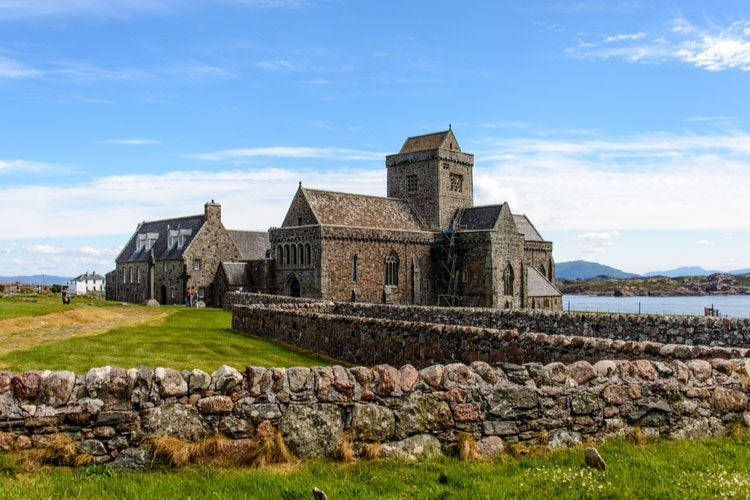 We sailed north from Iona to Staffa Island with its basalt octagonal columns and then onwards to the Treshnish Isles to watch seals. For the night we continued our voyage to the Atlantic towards St. Kilda. This small island is stuck 50 NM out west of the Outer Hebrides and has been inhabited by a community of people living on bird hunting, fishing, agriculture and sheep farming for several thousands of years.

The men there caught birds on high cliffs, climbing them barefoot and over the centuries, their toes have increased in size in order to be able to stand better on the small rocky ledges. Darwin would love it there, several times over :-) 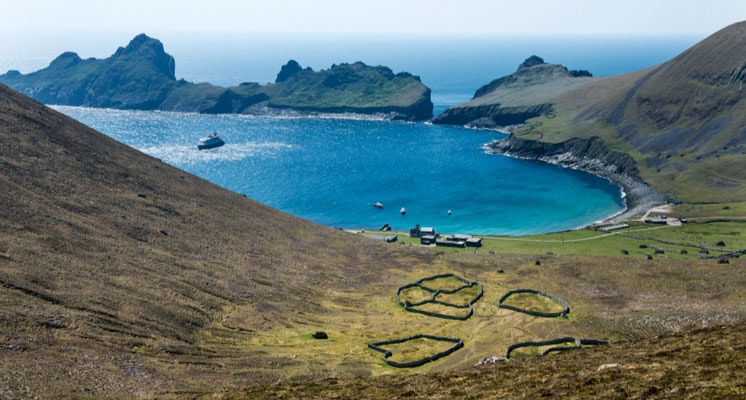 The island St. Kilda is the first World Heritage Site in Scotland and every Scotsman who you tell that you were on Kilda, looks at you as a particularly well-travelled man :-) This small island really made an impression on us and is deeply inscribed in our memory.

Small houses standing in a semicircle, stone shelters with grass roofs, sheep from the Iron Age, mice twice the usual size, steep cliffs, thousands of birds, all of this will take you back to times long gone. Time feels like it is running quite differently here. Sort of slower. 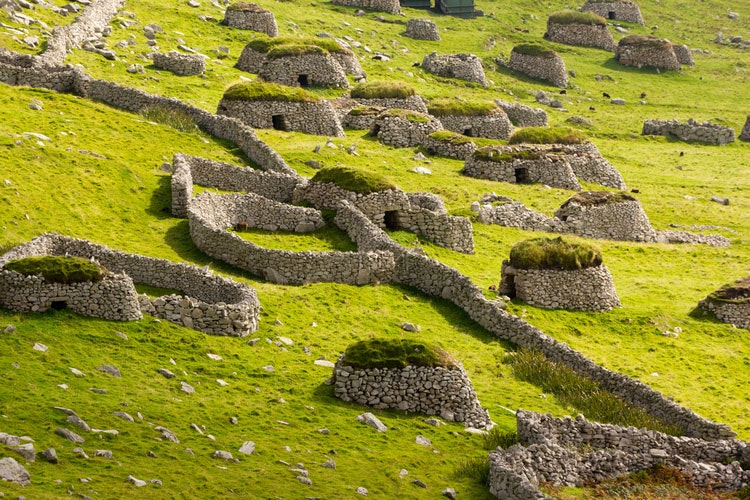 In Kilda, we felt the repercussions of the fight against terrorism. In the guide we had read that there is a small restaurant on the island and so we asked the custodian of the island where it was.

He told us it had been closed to tourists because it is located in a military building. Due to the risk of a tourist blowing up the restaurant to destroy the military base, tourists can no longer go there. As a result, we did not get into the pub because of the war on terror.

From Kilda we sailed overnight to the Outer Hebrides, to the islands of Lewis and Harris. It was clear, cold (around zero) and with a headwind. The nighttime voyage against the wind, on the engine and with the small mainsail was quite challenging, but the night watches were rewarded by the Northern Lights that burned incredibly brightly in the sky, all night long.

Green flashes ran across like a laser show all across the northern sky. Later the locals told us that at the end of April such a powerful aurora is very unusual. So we were lucky. 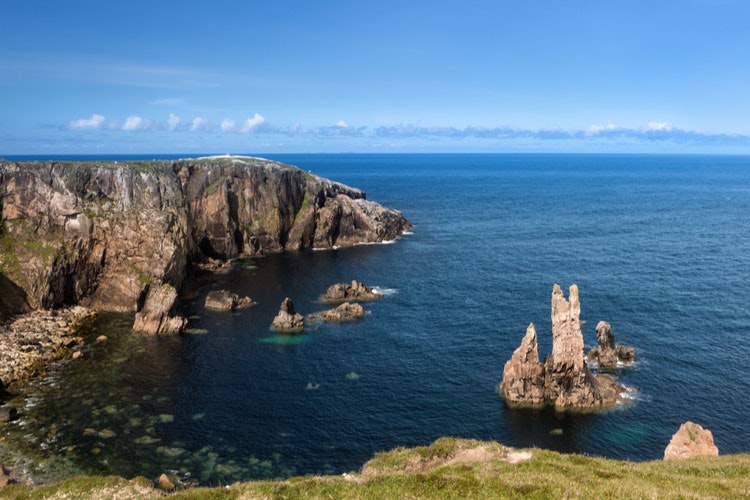 For the whole of the next day, we were mostly winding our way towards Stornoway, the capital of the Hebrides, where we landed late in the evening. The next day we took a local bus to explore the island and visit the Celtic standing stones in Callanish, estimated to be 5,000 years old.

The stones have an incredibly magical atmosphere and each spot radiates a different energy. The stone circle, built around the central highest stone, acts as an energy amplifier. From here we continued to an Iron Age village. 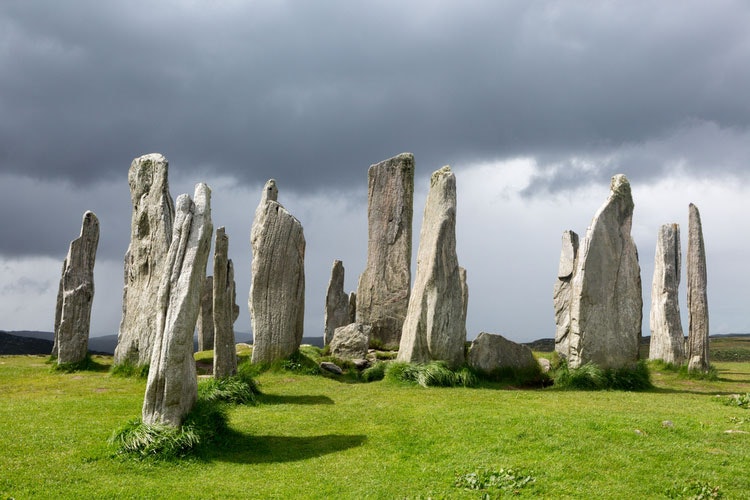 This village had been hidden under the sand dunes but part of it was uncovered during a particularly severe storm about 16 years ago. It is interesting to see how people lived here thousands of years ago and how beautiful the bay is that they chose to live their lives.

The forecast for the next day was NW 40-50 knots. Ideal conditions for sailing to the Isle of Skye. We sailed out of Stornoway at dawn using just a large Genoa sail. Gradually, we reduced it to a very small genoa. The wind was blowing at 35-50 knots, so we enjoyed some wonderful yachting. 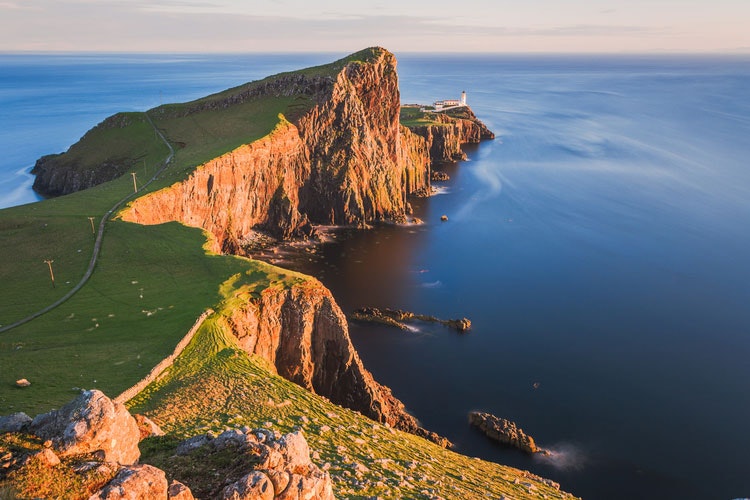 No one else was sailing, just our three boats under a small piece of front sail to the Isle of Skye. We covered seventy miles in 10 hours. It was a solid and exhilarating performance. On the Isle of Skye, we could ease up on our demanding travel pace and start enjoying the comfort of harbour pubs, occasionally interspersed by a visit to an island castle.

In the fjord of Loch Alsh we visited the small island castle of Eilean Donan. This picturesque castle can be seen in almost every historical film shot in Scotland. We anchored directly in front of it, casting it in the starring role for our quick landing. In the evening we sailed south along Skye and landed at a new marina in Mallaig at night. 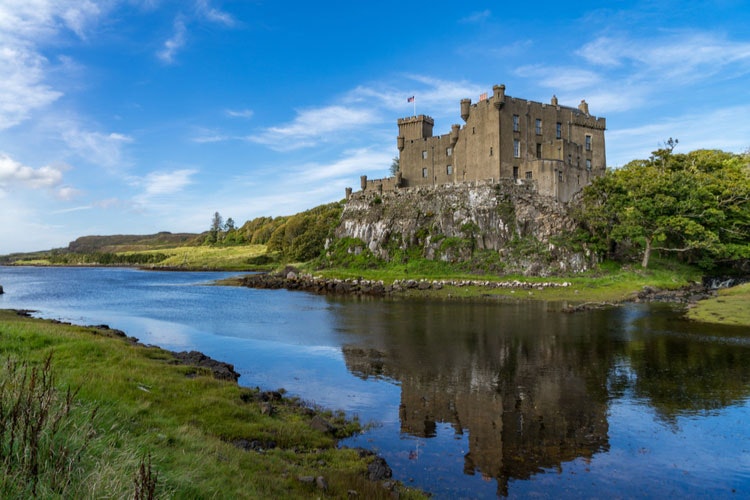 The marina was so new, in fact, that we arrived in the morning at its grand opening. We took part in that fanfare, then refueled all our boats. When paying for the fuel, the guy at the filling station informed us that there was a big celebration in Tobermory where we were headed. We had something to look forward to.

Unfortunately, after setting sail I happened to mention it to the crew and all of them wanted to sail directly to Tobermory. However with the power of the captain's authority, I outvoted them and we first sailed into the beautiful fjord of Moidart.

The entrance to the fjord is quite difficult to navigate, but the reward for this is the old Castle Tioram at the end of the fjord. We landed at the ruins of the castle, which its owner has been unable to restore, because the government agency Historic Scotland has prohibited him from doing so. The owner must keep the castle in a state of dilapidated ruins so that it remains the same as it has done over the last two hundred years. 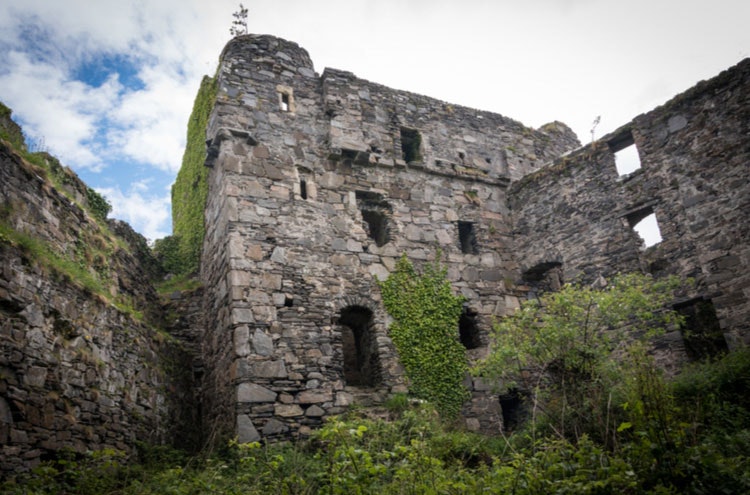 There is a large sign at the gate to the castle which reads “Do Not Enter”. For those who choose to ignore it and go in, however, there is a hard hat hanging on the wall so as to protect you if something happens to fall on your head. And inside the castle there are ladders on the walls, to make climbing the walls less dangerous. It’s a pretty amazing approach to those who flout the rules.

In the evening we arrived in Tobermory, the capital of the island of Mull. When we arrived around midnight, the festival that we had been told about was in full swing. All the bars were overflowing, so we couldn't resist heading out and have a few drinks to our amazing voyage. 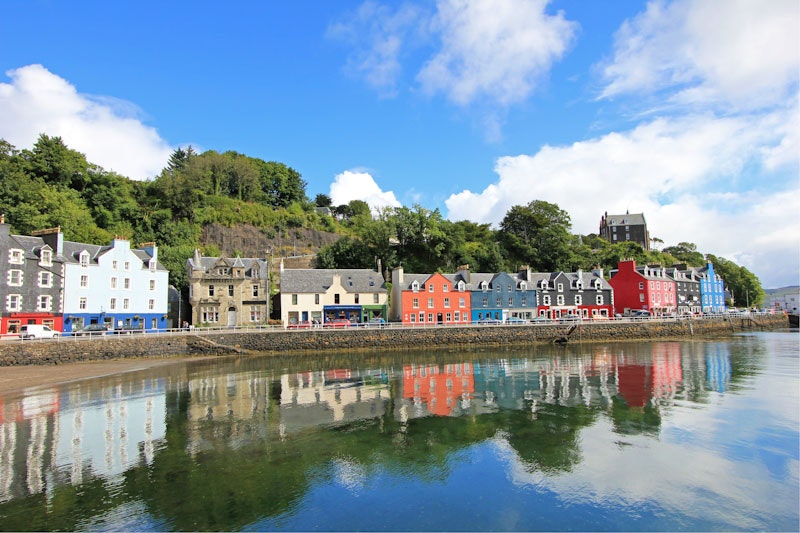 In the end, it was the most demanding night watch for all the crews. Excess alcohol and amorous local women proved to be a particularly dangerous combination. At dawn, we returned exhausted to the boat, fearing we’d be affected by sea sickness in the harbour.

On the last day we just relaxed, recovered from the previous night’s revelling and sailed back to the starting point, the Dunstaffnage marina. The voyage was at its end, one which had been very cold, demanding, but also beautiful. A few people realized that this type of yachting is really not for them but others will definitely be doing something like this again. 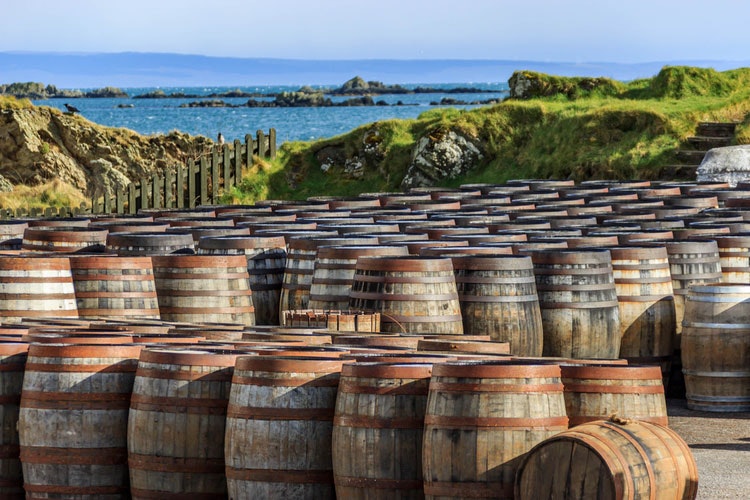 Boats in Scotland can’t be found in our search and are available in a limited amount only. If you plan travelling to Scotland on your own, please contact our specialist directly.

Please note that sails in Scotland shall be better planned in advance and are usually having only a limited number of boats and dates available.