The 10 most beautiful beaches and bays in Europe

You don’t have to sail in the Caribbean, there are beautiful beaches hidden all over Europe. Some are only reachable by boat, so they remain virtually untouched. They're waiting to be discovered!
Published by Yachting.com - 02/24/2022

Do you dream of abandoned coves, untouched beaches, white sandy beaches and a clear turquoise sea? You don’t have to sail off to the Caribbean, there are beautiful beaches and bays hidden all over Europe. Some are only reachable by boat, so remain virtually unspoiled. They're waiting to be discovered! When you discover them you’ll enjoy unforgettable views only interrupted by the cries of gulls and the sound of crashing waves. Let's take a look at the list of places we think are truly worth visiting.

The most beautiful bays and beaches in Greece

The Greek islands don’t lack in diversity and it would literally take a lifetime of yachting to discover the numerous coves and beaches. Despite the yachting infrastructure not being quite as developed as in Croatia, you can still look forward to cheap prices, great hospitality, fine dining and the most stunning sea you can imagine.

Eternal youth on Lalaria beach, the island of Skiathos 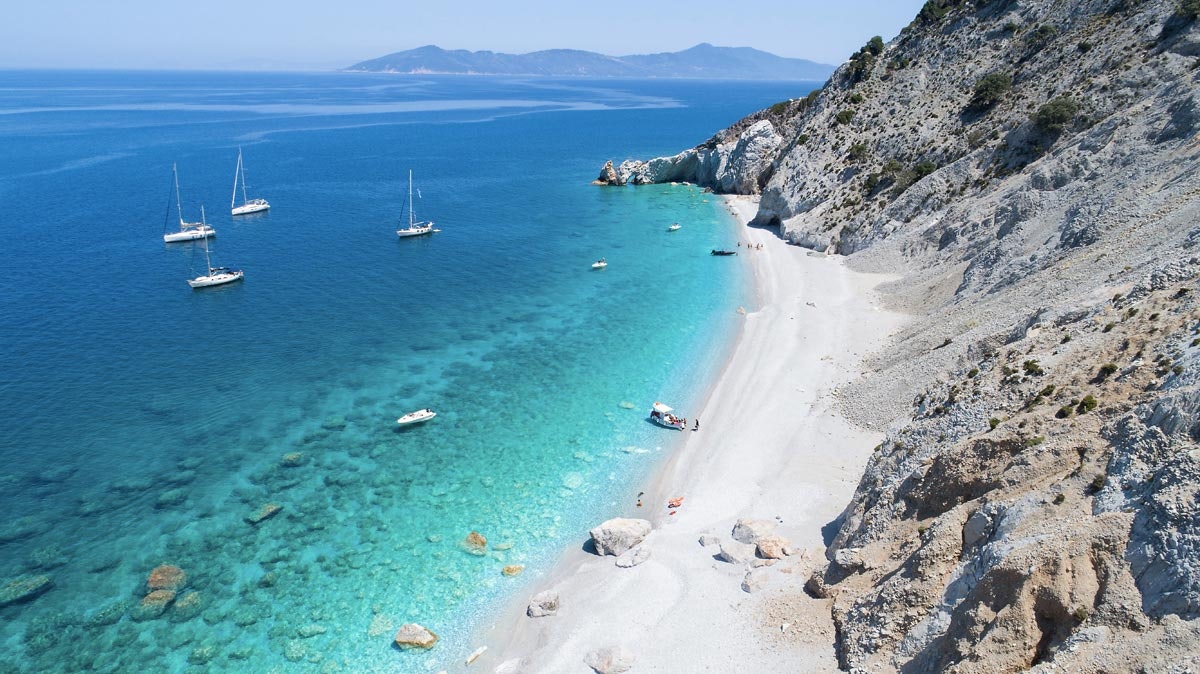 The Gate of Eternal Youth on Lalaria Beach

Legend has it that if you pass through the naturally formed rock gate (the distant tip in the photo), you will gain eternal youth. Try it out for yourself! Even if this fails, there’s no doubt you will fall in love swimming along this breathtaking beach. Lalaria beach in only accessible by boat but you’ll be rewarded with spectacular cliffs and white sands washed by a turquoise sea.

The lunar beach and Sarakiniko Bay, the island of Milos 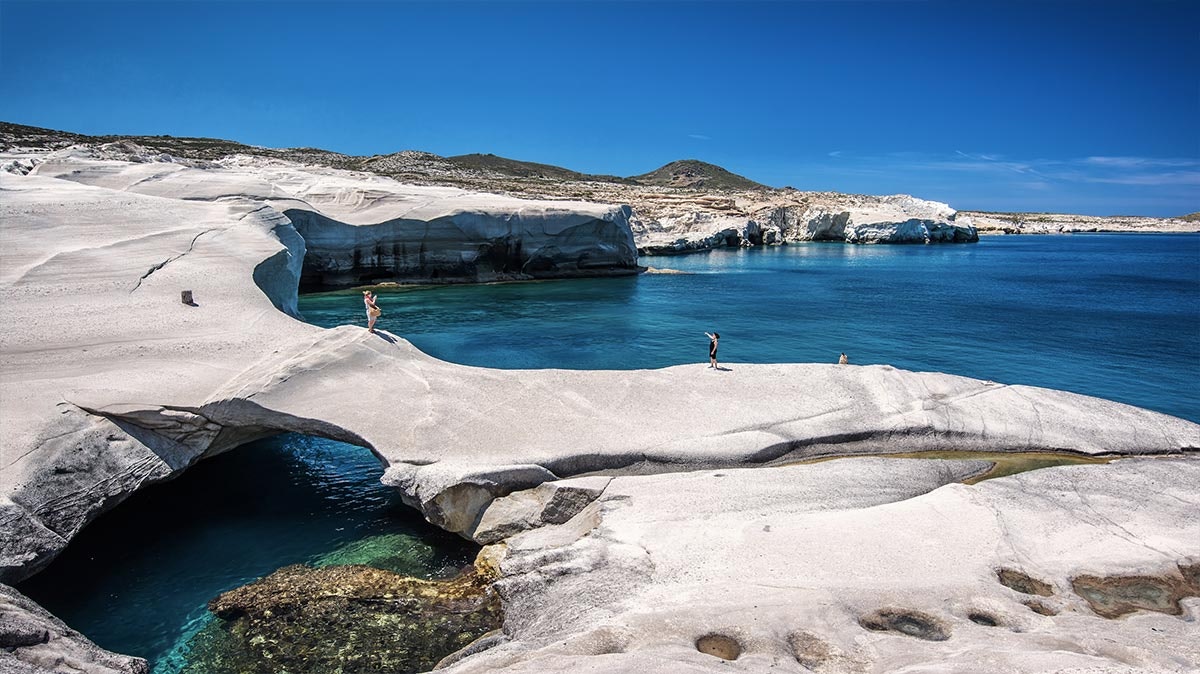 Lunar Sarakiniko Bay on the island of Milos

Time slows down on the island of Milos. It’s a world of its own, a world of snow-white cliffs, caves, rocks and open sea. The unusual formations in the bay of Sariniko are bordered by nearly 2 kilometers of coastline that can be comfortably circumnavigated. On the way, you’ll discover beautiful little coves and a variety of caverns. Or stretch your legs and take a stroll up to the village of Mantrakia.

The most beautiful bays and beaches in Italy

Picking out the most beautiful beaches and bays in Italy is almost impossible. The Italian islands and islets hide hundreds of them. We’ll bring you two of the most beautiful and plus a hidden beach. Whilst sailing around the islands you’re sure to find numerous other small and beautiful bays.

The heavenly coast of Cala Rossa, the island of Favignana near Sicily

Close to the island of Sicily, lies a small paradise, the Cala Rossa beach. The celestial blue sea surrounds majestic white tufts of rock. It’s best accessed by boat and the views will truly take your breath away. Fine white sand, crystal clear water, small cliffs and wonderful swimming. Be careful of the wind because when it builds up strength it’s much harder to anchor. Another stunning beach Bue Marino is just a stone’s throw away. 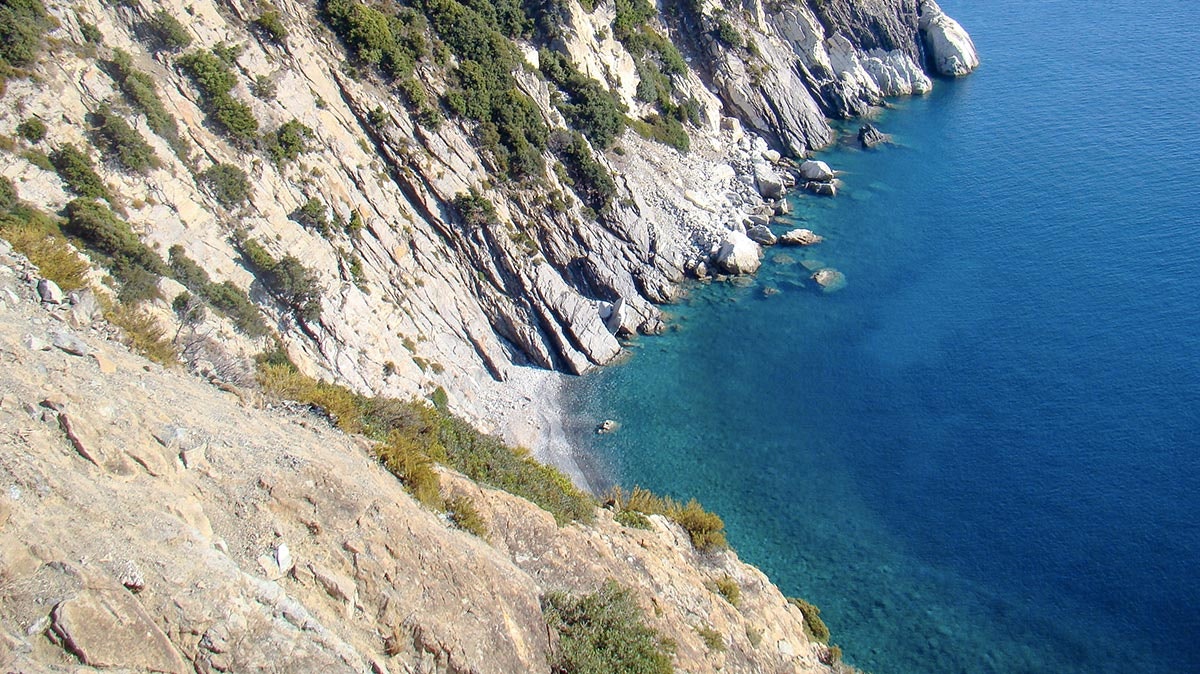 The wild beach of Punta Nera on Elba

Are you dreaming of a wild, unspoiled beach that is still virtually undiscovered? Then sail to the small bay of Punta Nera on the sunny coast of Costa del Sole on Elba. Thanks to the steep rocky coastline, it's free of hikers, leaving you to enjoy a whole day of tranquility. The beach is a multi-coloured mix of white sand and black sandstone beautifully contrasting the sea that passes from light turquoise to a magical deep blue. Hidden from curious tourists, the very summit of the rocks is guarded by the statue of the Virgin Mary. The beach is best reached on a small boat.

The exceptional Cala Luna beach, the island of Sardinia

Sardinia is a paradise of beaches and hidden bays, but one stands out as truly special. This is the Cala Luna beach in the Gulf of Orosei on the east coast of Sardinia. It is probably the most beautiful Mediterranean beach accessible only by sea. After bathing in the Caribbean-like blue sea, you can take a refreshing dip in the fresh water at river mouth is just beyond the beach. Plus there are several big caves with stalactites right on the beach itself. With a snorkel, you can discover massive rock faces and small rocks lying on the seabed. In this bay you can find other beautiful places, such as Cala Mariol beach with a thousand shades of blue or the infamous Bue Marino cave, which has been perfectly mapped out by a bunch of Czech divers.

The most beautiful bays and beaches in Croatia

The long rugged Croatian coastline is lined with hundreds of islands, unspoiled nature and a crystal clear sea and is home to numerous bays. The beaches in Croatia are mostly pebble and rock, but there are also beautiful sandy beaches to be found. Let’s discover the most picturesque ones together.

The magical beach of Lubenice, island of Cres 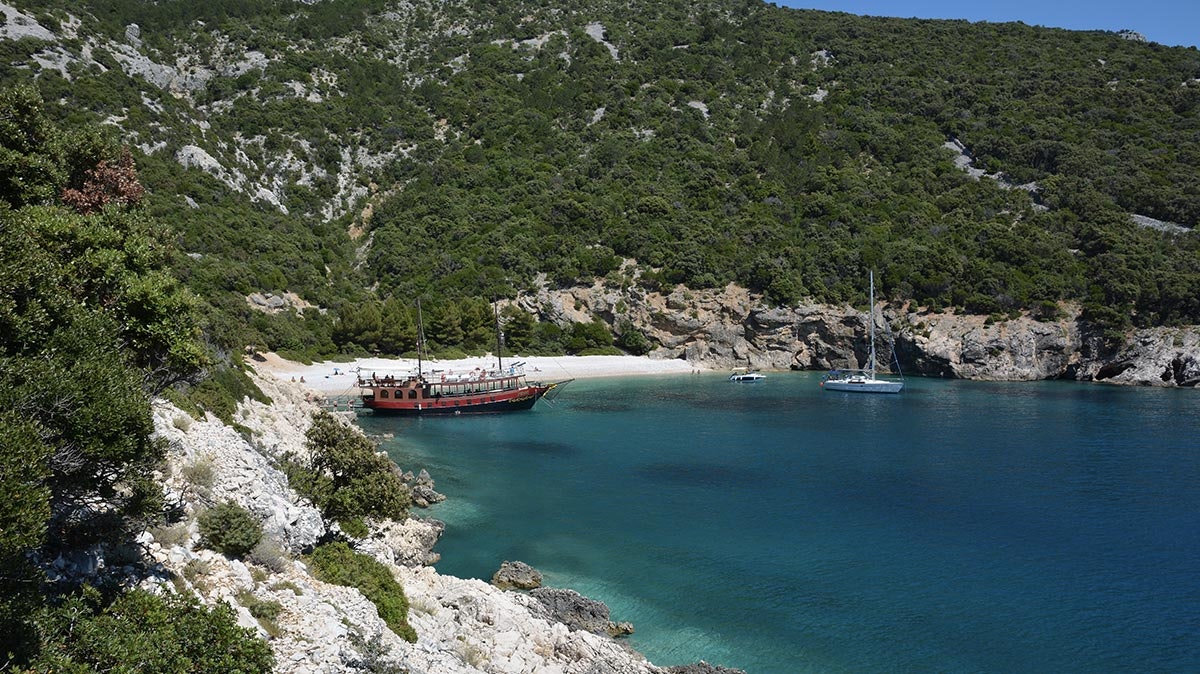 The magical beach of Lubenice, island of Cress

The deserted beach hidden in the emerald bay of Sv. Ivan is truly enchanting. Full of snow-white pebbles, it lies directly below the town of Lubenice. In between bathing, take a trip up the steep path to the medieval fortress on the cliff. We do not recommend anchoring overnight in the bay, a safer spot is, for example, in the Cres Marina. 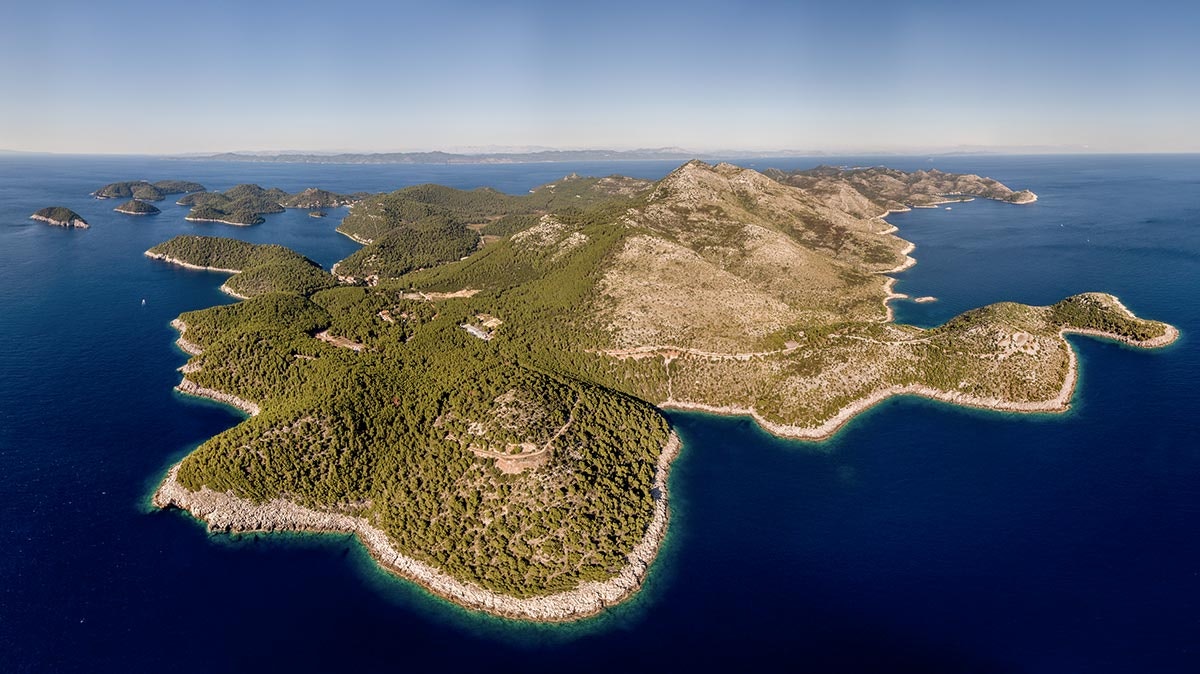 Sandy beach on the island of Lastovo and Saplun

This beautiful sandy beach is located on the island of Saplun near Vis. The narrow beach is lined with fragrant pines and is a paradise for yachtsmen. The sandy beach, quite rare for Croatia, will also appeal to children alike.

The romantic beach of Stiniva, island of Vis

The romantic beach of Stiniva on the island of Vis

The magnificent beach of Stiniva despite being one of the most famous, cannot be left off our list. It’s well worth a look. The bay is encircled by high rocks, with the end of the beautiful gorge opening up onto a small pebble beach. Definitely bring along a snorkel and a mask, as the numerous underwater reefs are teeming with fish. The beach is also accessible on foot, so the quiet is best enjoyed out of season.

The most beautiful bays and beaches in Spain

The best beaches are to be found around the Balearic islands. The azure Caribbean-like sea, the beautiful sheltered bays with fine white sands, pristine beaches, rich marine life and divine tranquility are simply unmatched.

The fishing beach of Cala en Baster, the island of Formentera 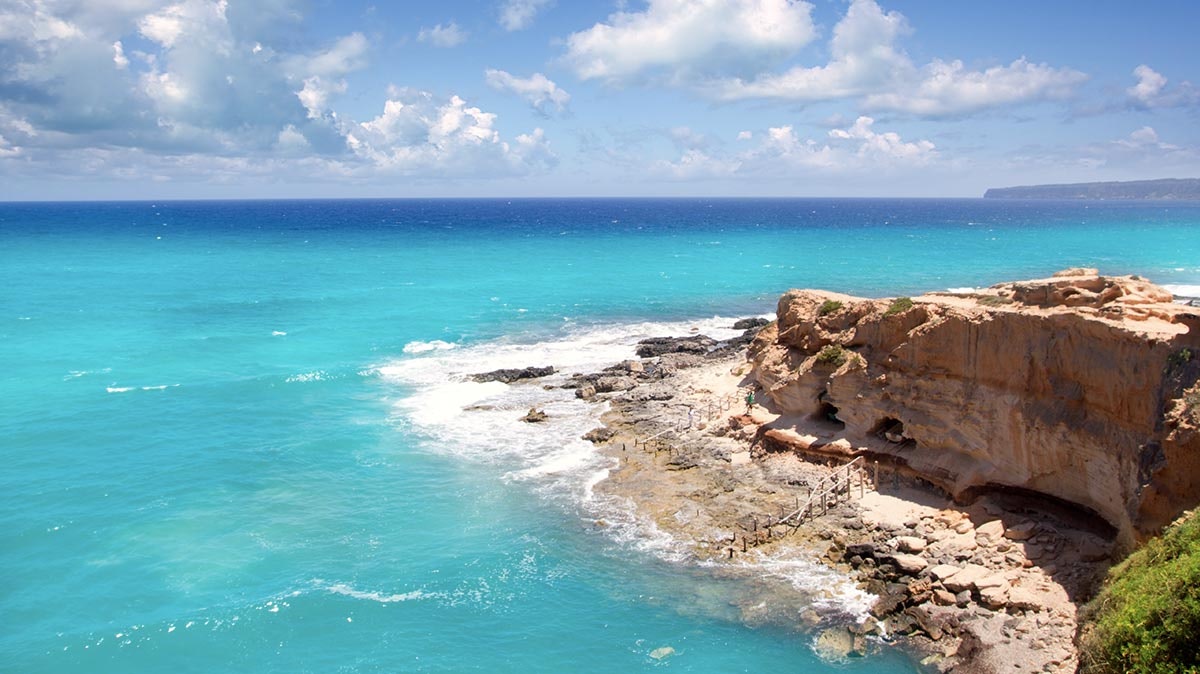 The natural bay surrounded by tall rocks lies in the northeastern part of Formentera. Due to its inaccessibility, this island is absolutely full of deserted beaches. On the Cala en Baster beach you can see unusual wooden walkways, used by local fishermen who are often the only ones you meet on the entire beach. Their boats are hidden in caves carved directly in the rock itself. The multitude of interesting caves and crevices in the cliffs will delight every lover of underwater life.

The charming beach of Cala Macarellet, the island of Menorca 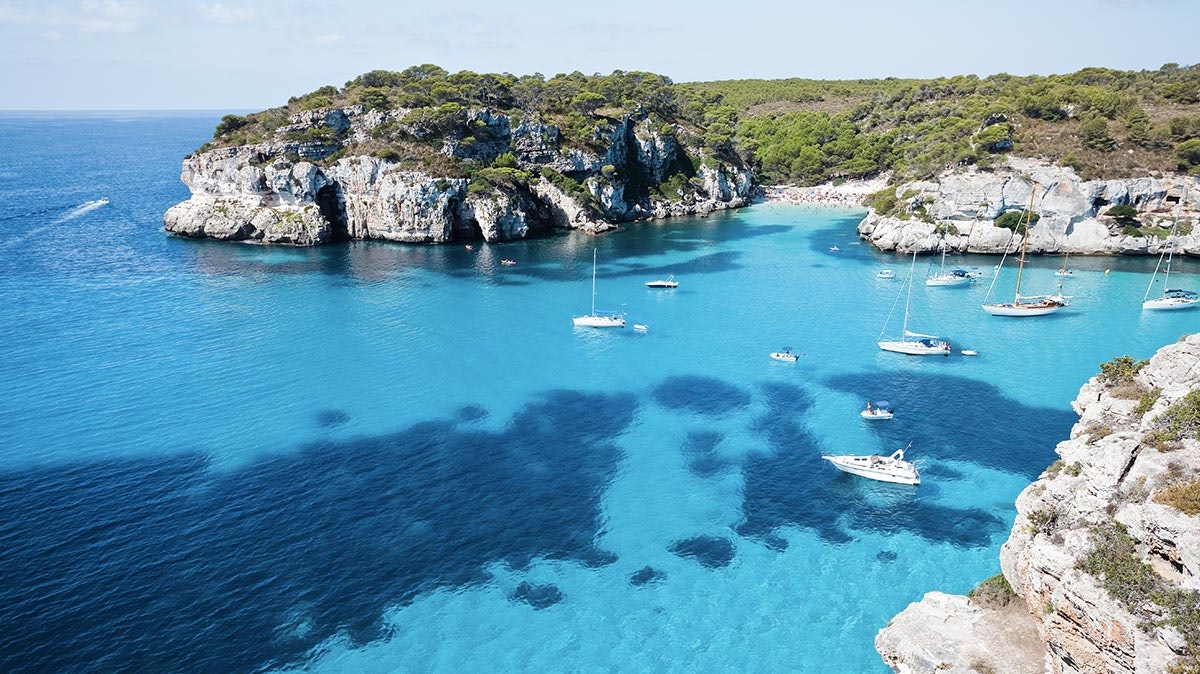 The charming beach of Cala Macarellet on the island of Menorca

The beautiful beaches of Menorca can be found in the dozen. We recommend the tiny beach of Cala Macarelleta huddled between rocks and pines. The white sand and turquoise sea will instantly take you off to the Caribbean and soothe your soul.

We've made our choice, have you decided where to go next year yet? Imagine yourself on a boat, where the sun shines and the air is warm. There are gorgeous and deserted beaches will hundreds of boats still available.

In short, you have to experience it. Let's plan your dream vacation.