Iced in (almost) in the middle of Europe: spring sailing on the Baltic

Pavel Kocych is an experienced yachtsman, instructor and examiner. He is often to be found on the rougher waters of the Baltic, where he introduces other enthusiasts to the secrets of sailing. But this time, there was a surprise in store for him before he’d even set off onto the untamed Nordic waters.

Pavel Kocych is an experienced sailor, instructor and examiner. Very often you can meet him in the rugged waters of the Baltic, where during sporting sailing initiates the secrets of yachting enthusiasts. But this time, there was a surprise in store for him before he’d even set off onto the untamed Nordic waters.

Iced in on the Baltic, through the eyes of Pavel Kocych

Last spring, I decided to go on yet another Baltic voyage. It was at the end of March, the astronomical spring had begun, the sun was bearing down on the earth more intensely each day and my hometown of Prague was slowly beginning to blossom. So how better to welcome the return of spring than sailing at sea?

Overnight, we drove our cars around Dresden and Berlin, then took a course almost directly north along the Baltic coast, and finally across the high bridge of the Stralsund Crossing over the island of Rügen to our starting port. To the small island town of Breege, where we parked in the car park behind the harbour in the early hours of the morning.

I got out of the car and as it was too early to visit the local Mola charter company office, I went to take a look at our forty-five-foot boat. It was there, glistening in the rays of the rising sun, the only one at the long wooden pier and it was ready for our voyage. The sea seemed eerily calm.

After a short while, I was back at the car.

"It looks like it won't be possible, we have a slight problem," I announced to the crew who, envisaging an early departure, were already pulling my beaten up red bag out of the car. "Are you joking?" replied one of them. "I’m not, go take a look". They all took a few steps so they could see the harbour over the wooden hut. And there they saw our one and only sailboat.

"This is a local anomaly"

It was still there, alone, on that strangely and uncharacteristically calm surface. And around it, there were swans and ducks. But those birds were not swimming around, they were walking! The smooth surface with its tiny ripples was not, in fact, water, but ice. And it stretched as far as the eye could see.

For approximately 300 metres to Rügen Bay, only the lone red and green channel markers peered out of the ice in the distance. Beyond them, the genuine surface of the open sea glimmered. The one we needed. And all around me, those little ripples on the ice had frozen into strange patterns.

So we stood there together in the rising spring sun, eight Czech sailors ready for a spring voyage across the Baltic Sea to Denmark and Sweden, and we didn’t know whether to laugh or cry. A strangely comic site, you might say…

It didn't take long before the first German technician appeared. He glanced out to sea, glanced at us, and disappeared into the ground floor office on the shore. Soon afterwards out came another one and disappeared into the office with his phone. In an instant, they both appeared on the wooden pier at the sailboat. They tested the thickness of the ice with a bar. The ice was too weak to hold a man but apparently strong enough to trap a fibreglass boat. 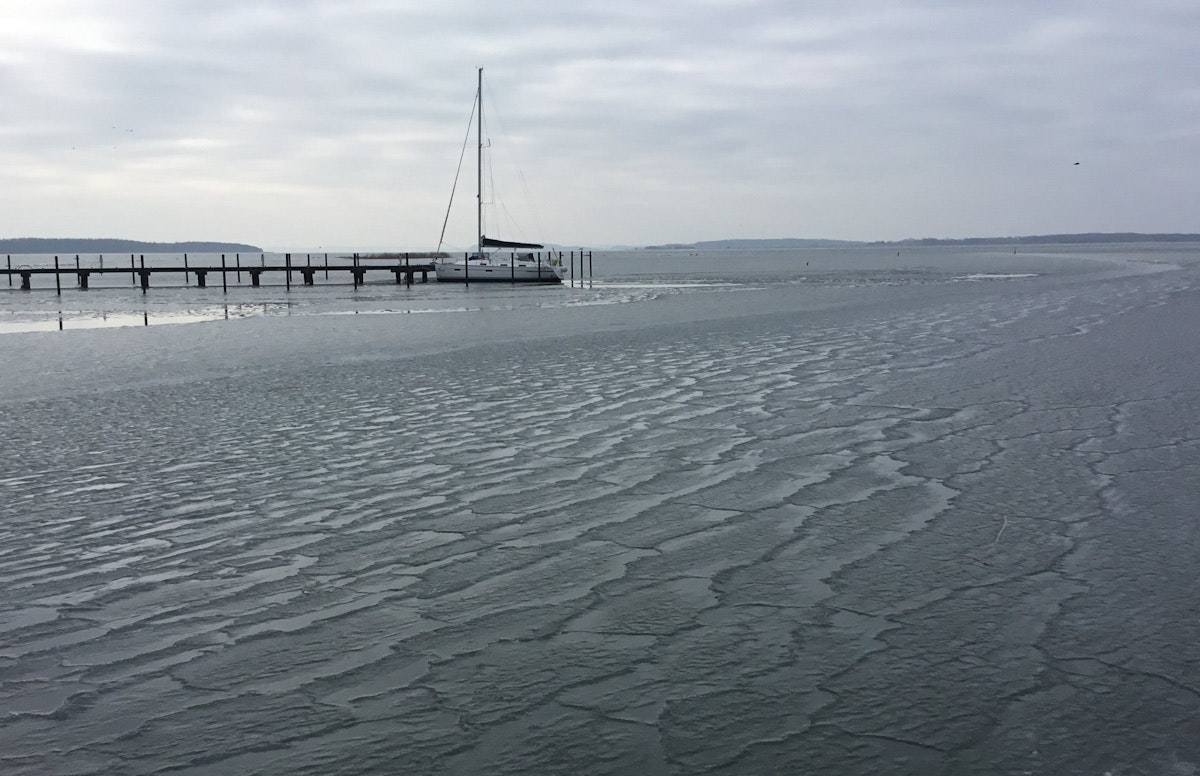 I went up to them and looked at them questioningly.

"This is a local anomaly," one of them said in English. And he added that the ice, with a temperature slightly above zero, would dissolve over the next two days.

“But we can't wait two days, we’ve only rented the boat for four days. We need to sail today! ”

"Hmm" pondered the other technician, then added, "Wait a minute," and walked away from the pier.

After a short time, I saw them both start up a small, scuffed metal boat with a 20-horsepower outboard motor off the far shore of the harbour. And their little "icebreaker" then bit into the ice. Nothing happened at first. One of the technicians reversed the motor, while the other bravely struck the ice at the bow with a steel-tipped pole. And then the ice in front of the bow began to crack, and the boat pushed forward inch by inch, smashing the packed ice.

It kind of looked like a scaled-down model version of an icebreaker sailing through Franz Joseph Land. Only the size of the icebreaker and the thickness of the ice were significantly smaller ... But of course, it didn’t work out, after half an hour of screaming motor and just a thirty-metre path cut through the ice, both sailors - technicians gave up.

But what would kind of story would it be without a happy ending? While both of them were struggling with the ice, their boss had arrived at the company's office, rationally evaluated the situation, and arranged a boat for us at the non-frozen port of Wiek, less than a 20-minute drive away. So within the hour, we were already standing at a concrete pier with a row of tied-up sailing boats ready for winter, from which I could choose any.

Another hour later and we finally set sail, without water in the tank, but on a new forty-five-foot Bavarian with a full-batten mainsail and dual rudders to meet our next spring Baltic adventure.

20 hours later, after a transverse crossing of the Baltic off the coast of Denmark, in the channel between the windmills infront of Copenhagen harbour, the shattered ice strewn around the stone shores covered with white washed-up floes brought a slight smile to my face.

Would you like to sail in the rough waters of the Baltic? Available boats are waiting for you in our web portal.

Boats on the Baltic