It's unusual for a single person to excel in two disciplines as diverse as politics and yachting. In this regard, President John Fitzgerald Kennedy was truly exceptional.
Published by Yachting.com - 06/27/2022

Most members of the Kennedy family shared a love of boats, of recreational and competitive sailing, and John F. Kennedy, one of America's most famous presidents, was no exception. Throughout his life, he sailed and raced a variety of boats, winning multiple awards in yachting competitions. After all, he began sailing long before graduating from Harvard, long before becoming a senator, a war hero or even a president and it remained a passion of his throughout his lifetime.

A prominent political dynasty, the Kennedys are renowned for their involvement in public life, contributions to the United States and the world, as well as a series of family tragedies, the most notable being the assassination of John Fitzgerald Kennedy. A little know fact, however, is that the Kennedys were avid and successful sailors.

John F. Kennedy and his eight siblings were introduced to yachting by their father, Joseph Kennedy, who was chairman of the Maritime Commission, as well as holding many other important positions, particularly in finance. Interestingly, despite their wealth and ability to afford huge luxury yachts, the Kennedys preferred to sail in smaller, sport boats they could steer and pilot themselves.

Joseph Kennedy encouraged his children to learn to sail from a young age, sailing together as a single crew, or competing against one another. It soon became clear that most of them had a natural flair for sailing. The most successful of them was JFK, winning numerous awards for his sailing achievements, such as victory in the Nantucket Sound Star Class Championship cup in 1936. Both his brother Joseph Jr. and sister Kathleen were also very accomplished sailors.

Read stories of other famous personalities and sailors:

The most famous female sailors of all time

The most famous female sailors of all time

The sailboat Victura, his lifelong companion

The first boat JFK helmed was a 22-foot Olympic sailing boat named Flash II. It was at her helm that the President learned the basics of sailing and went on to win several major American regattas. 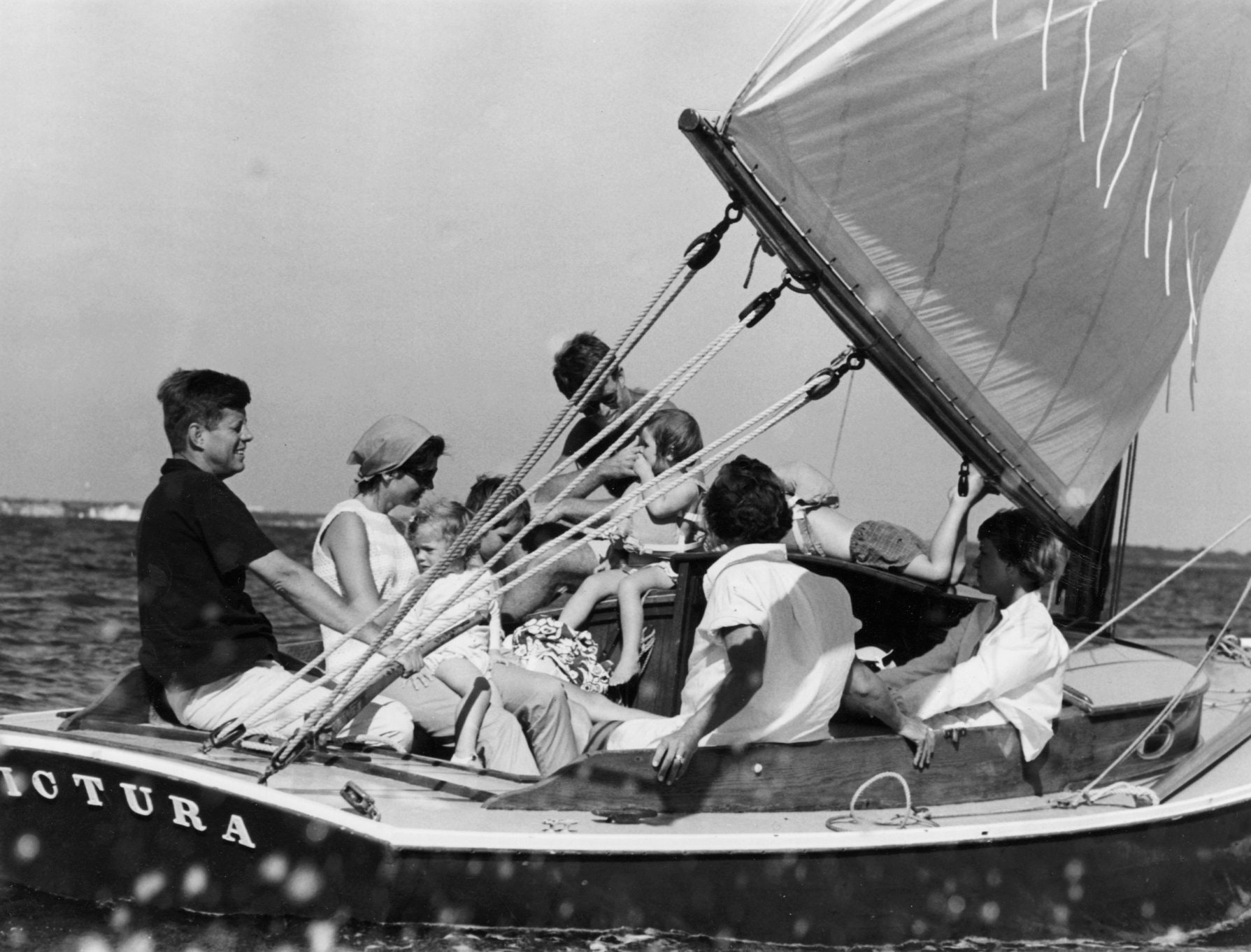 John F. Kennedy's greatest love, however, was his second boat, the Victura, a 25-foot sloop he received from his father for his 15th birthday. JFK kept this classic wooden sailboat throughout his life, often taking his entire family out on it during his presidency. As it was easy to handle, it was on the Victura, that he taught his children Caroline and Johnny Jr. to sail. In fact, the Kennedy family kept the sailboat long after his death and sailed it for more than 50 years. Today, she sits with her bow pointing out to sea in front of the John F. Kennedy Presidential Library and Museum in Boston.

Our offer of sailing boats

Kennedy's love of yachting and boats, as well as his love of the sea, provided a welcome respite from his tumultuous presidency. Even while the administration was negotiating the Cuban missile crisis, it is said he was sketching drawings of yachts and often used sailing-inspired phrases in his speeches:

"We set sail on this new sea because there is new knowledge to be gained, and new rights to be won, and they must be won and used for the progress of all people. For space science, like nuclear science and technology, has no conscience of its own. Whether it will become a force for good or ill depends on man, and only if the United States occupies a position of preeminence can we help decide whether this new ocean will be a sea of peace or a new terrifying theater of war."  JFK 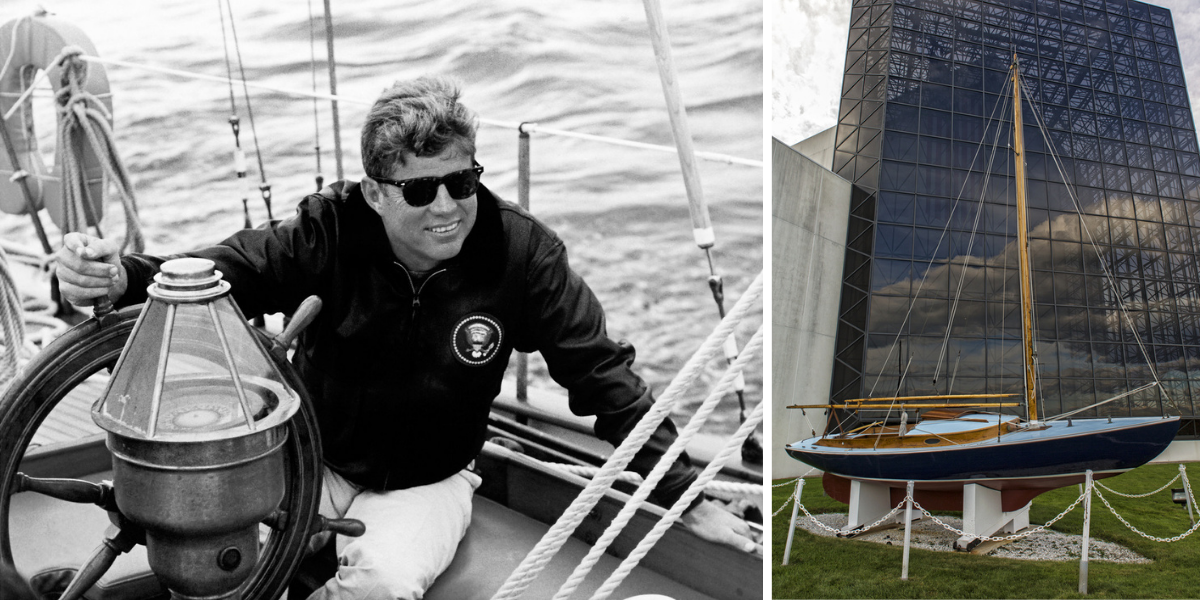 Captain JFK and the sailboat Victura

All the President's ships

After JFK became president, he almost immediately acquired an official presidential boat, the 62-foot yawl Manitou, on which he not only sailed with family, but also welcomed Hollywood stars, statesmen and other notable personalities. This 1937 performance yacht, made of mahogany with teak planking, had caught his eye when he was just a senator. And as soon as he took office, he converted it into an office, from which he could communicate not only with the White House, but also the Kremlin. Manitou was quickly dubbed the "Floating White House".

Other official presidential vessels included the motor boat Marlin and the presidential yacht The Honey Fitz, which  John. F. Kennedy used on a regular basis, as had former presidents, such as Truman, Eisenhower, Johnston, and Nixon. The Kennedy family spent most of their summer weekends and holidays with close friends on this yacht, where it is said he was at his happiest. In fact, it was aboard The Honey Fitz that Jackie Kennedy threw him his last birthday party just months before his assassination.

"It is an interesting biological fact that all of us have in our veins the exact same percentage of salt in our blood that exists in the ocean, and, therefore, we have salt in our blood, in our sweat, in our tears. We are tied to the ocean. And when we go back to the sea — whether it is to sail or to watch it – we are going back from whence we came." JFK

Need help choosing the right course or cruise? I'd be happy to help you