Boating holidays in Thailand full of excitement and romance

Thanks to stable weather and its exquisite islands, exotic Thailand is one of the most beautiful sailing destinations. You’ll meet plenty of smiling people, you’ll be enchanted by the crystal-clear sea teeming with life and delicious local cuisine. What’s more, Thailand prides itself on its more than 750 islands and islets with their romantic beaches and  bizarre rock formations. 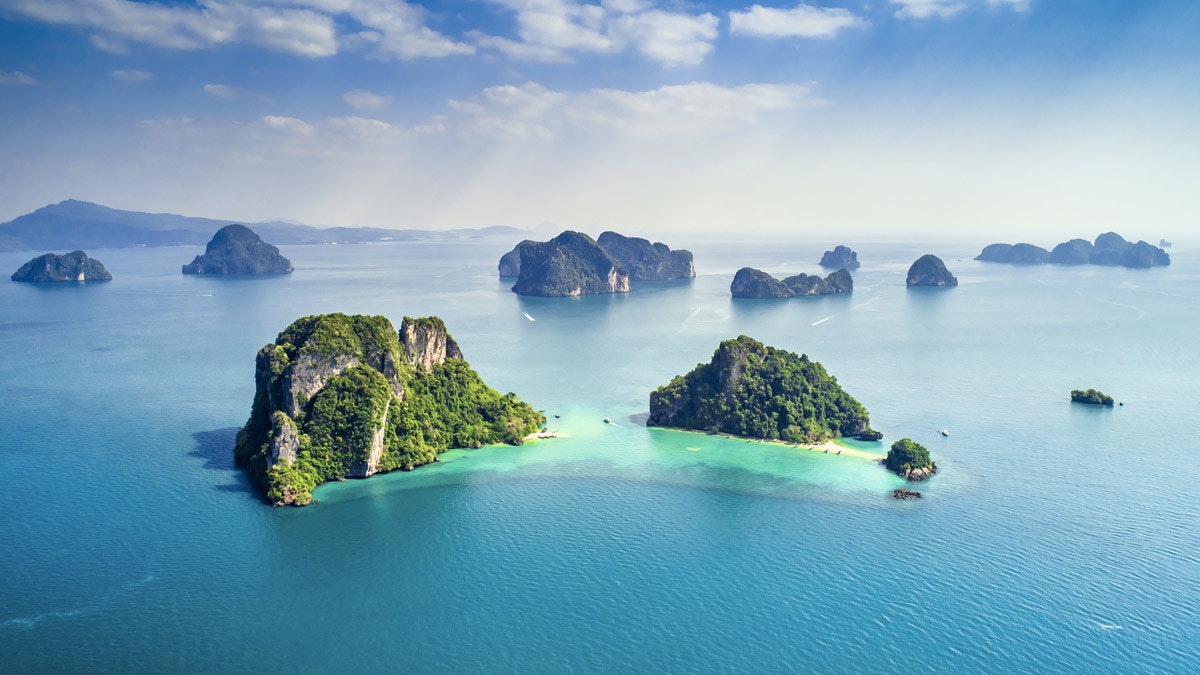 What’s the weather like in Thailand and when’s a good time to sail there?

You’ll enjoy stable wind in Thailand, thanks to its position in the part of the monsoon zone which does not experience tropical storms and means yachting conditions are good all year round. When planning, you only need to orient yourself according to where and when it’s raining. During the northeast monsoon it rains more in the Gulf of Thailand, while it’s dry season in the Andaman Sea. During the southwest monsoon, the opposite is true.

The dry season lasts roughly from the end of November to the end of April, when the northeast monsoon prevails and rain is minimal. The wind speed is usually around  5 - 15 knots and rarely exceeds 20 - 25 knots.

The 7 most interesting places in Thailand

The island of Phuket

On a Thai sailing holiday, you’ll likely fly to the international airport in the north of the island of Phuket. It’s the largest of the Thai islands and is the centre of the action in the Andaman Sea.

The most northerly and heavily frequented Yacht Haven Marina is well protected in the channel between Phuket and the mainland. It’s important to take tidal currents into account in this marina. The maximum tidal range in the Andaman Sea can be up to 3 metres!

You can also visit the stunning Big Buddha, which is one of the most beautiful in Thailand. Naturally, there are various shops, markets and a vibrant nightlife. For a more authentic experience, head for the east coast to see the villages of the Chao Ley people (sometimes called ‘sea gypsies’). 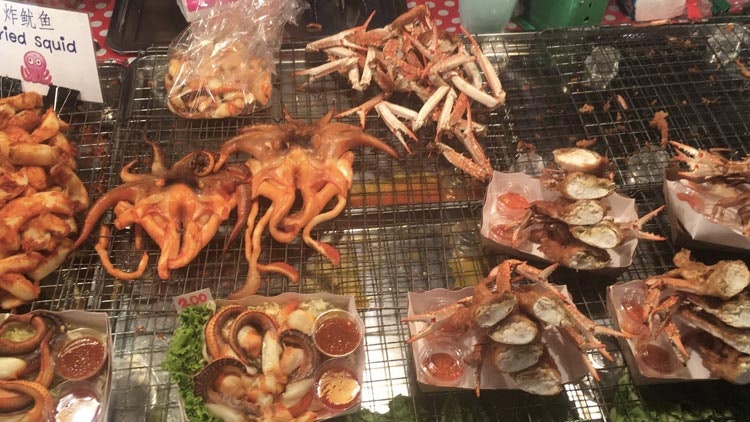 Thai street food in a market in Phuket, Thailand

This tropical paradise is a favourite with divers. It hides a colourful, awe-inspiring underwater world with up to 40 metres of visibility. You’ll also be impressed by the stunning sandy beaches lined with smooth granite cliffs.

The islands are part of the Mu Ko Similan National Park and are one of the places where you have a really good chance of actually seeing a giant manta ray. You can also see leopard sharks, moray eels, turtles, seahorses and beautiful coral full of fish.

The Similan Islands are a much sought-after diving destination

Ko Phi Phi are a group of small and unbelievably picturesque islands with wild jungle, limestone rocks, coral and the most emerald green sea. The whole area was hit by the devastating 2004 tsunami, but everything has been rebuilt.

The small and uninhabited Ko Phi Phi Leh was a forgotten Thai gem until a few years ago and the epitome of paradise on earth. After the film ‘The Beach’ starring Leonardo diCaprio was released, thousands of tourists started flocking here (and particularly to the beach in the film, Maya Bay). That’s why it’s good to get here in the afternoon and spend the night.

The whole area seems to be made for diving and snorkelling. In the spring months you can see whale sharks. These spotted giants are among the biggest sharks in the world. They are not a danger to sailors, however, as they feed on plankton and small fish. 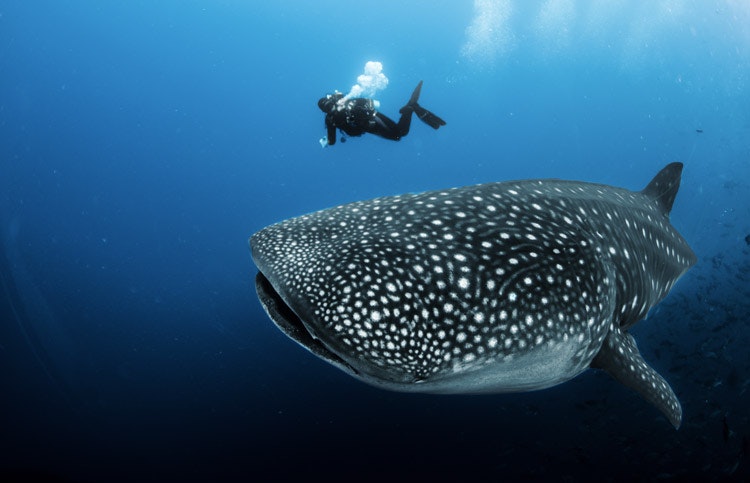 The island of Ko Phi Phi Don is the largest and is inhabited. It’s in the shape of butterfly, with two rocky outcrops linked by a sandy beach. This has been developed and you’ll find restaurants, shops, bars and clubs aplenty.

Around the island of Phi Phi Don are several bays suitable for mooring. The main bay and harbour is Ton Sai Bay on the south side. There’s a lot of traffic here, but that quiets down at night so you can sleep in peace. There are a lot of mooring buoys here, but it’s important to ascertain whether a buoy is actually available!

Loh Dalum Bay in the north-west is much more picturesque and peaceful during the day. You need to watch out for the reef which juts out a long way and makes disembarkation impossible when the tide is out. At night you’ll drop anchor right in front of all the clubs. The last option is Loh Lana Bay in the north. It’s quiet here in high season and most of the mooring buoys are available as the locals moor in Ton Sai Bay.

Romantic Krabi is also known as the ‘place in the sea of rocks’ and its name is well deserved. These tall limestone rock formations are everywhere and create dozens of small lagoons with clear, turquoise water all along the coast.

We also recommend exploring the tropical rainforest inland. There are dozens of caves along the coast, which it is claimed were used as hiding places by pirates long ago. You can also visit Krabi’s night markets in the port on Tha Khong Kha or on Thanon Sukhon.

This unmistakable rocky outcrop emerging from the sea is part of James Bond Island. It’s famous for appearing in one of the James Bond movies - ‘The Man with the Golden Gun’, in 1974. 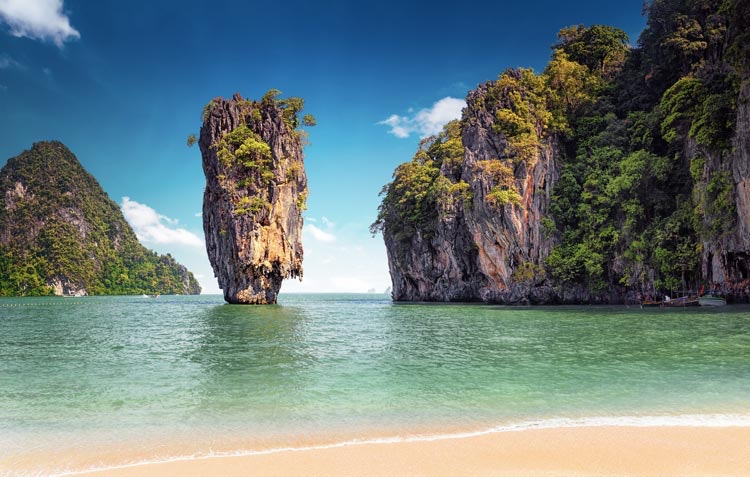 An island where time stands still and which didn’t even have electricity until recently. Anchoring is possible all along the west coast, the seabed slopes down gradually and you’ll find one beach after another. The white sand, crystal-clear sea and coconut palms all add a touch of magic. The best anchorage is found in the bay at Klong Dao Beach in the north and Kantiang Bay in the south.

A little to the south of Ko Lanta lie several smaller islets, Ko Ngai, Ko Kradan a Ko Muk. It’s hard to say which is the best beach here. You’ll definitely be surprised to often find yourself moored alone.

The biggest attraction in the west of Ko Muk island is the so-called ‘hong’, which is like a hole in the island. You reach the ‘hong’ by swimming across an inconspicuous 80-metre-long cave. At the end of the cave is a white-sand beach and a few trees - all enclosed by vertical rocks reaching up to a great height. Once upon a time, pirates allegedly used it as a temporary hiding place for their plunder.

The two islands of Ko Rok are more remote and therefore less frequented. They lie 10 km west of Ko Kradan. They are part of the protected area of Mu Koh Lanta National Park and are uninhabited, save for the ranger stations. The islands are just a little over 200 metres apart and the strait between them forms a massive coral reef. 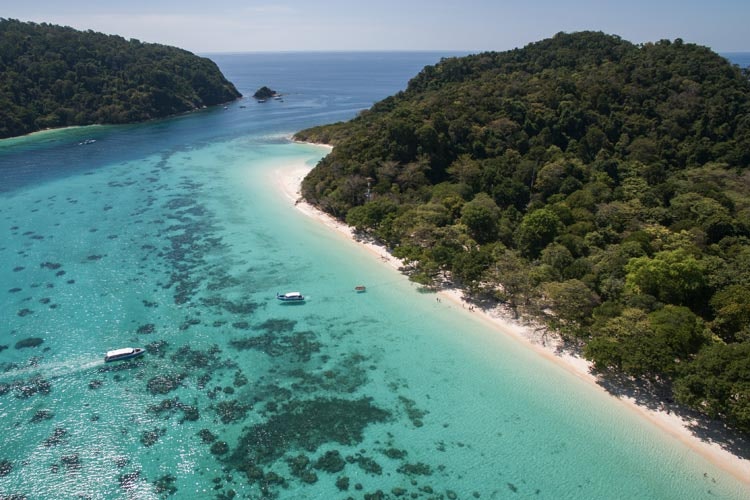 You’ll not find cleaner sea and such beautiful snorkelling and diving anywhere else. There are dive sites practically all around both islands. And again the beaches...Mooring buoys are used between the islands, but take care as not every buoy is in deep enough water.

Even on dry land, Thailand hides a multitude of attractions. One of the most visited sites in Thailand is undoubtedly the Grand Palace. You’ll find the famous Wat Phra Kaew temple here, which houses the Emerald Buddha, one of the greatest symbols of Thailand. 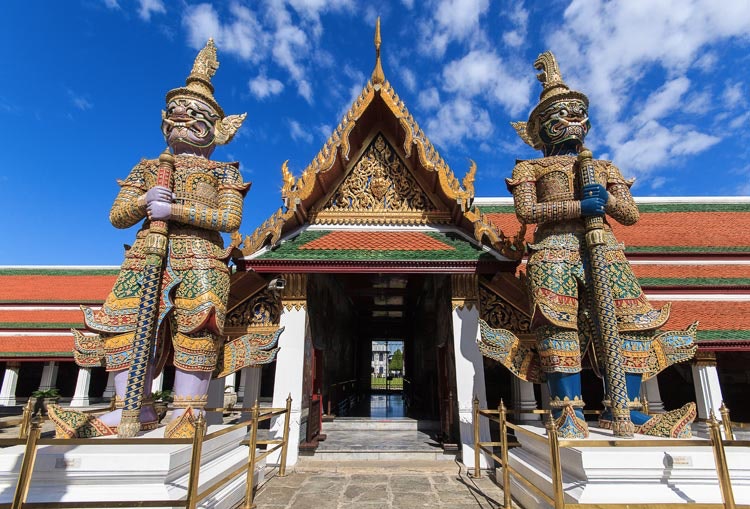 And where is the Grand Palace? In the capital city of Bangkok, which also has the poetic moniker City of Angels (Krung Thep). Part of the Grand Palace is still used today, but only rarely on ceremonial occasions. All buildings in the complex are ornately decorated and gave rise to the so-called Rattanakosin style.

How to make the most from a boating holiday in Thailand

In short, Thailand offers everything you need for a perfect sailing holiday. Do you want to uncover Thailand’s attractions for yourself?  Use our search yachting.com to find available boats, or contact us directly. We’ll recommend a suitable boat and the most beautiful sailing route.

Choose a boat in Thailand