What to do if a jellyfish stings you?

Who hasn’t been stung by a jellyfish at least once at sea! Usually, the encounter is simply unpleasant, but there are some species that can cause more serious injury. So, how to best treat injuries and deal with the more serious jellyfish stings?

In the more exotic destinations that sailors head in winter, you may encounter the most poisonous species of jellyfish, and the consequences may be long-lasting or even fatal. Therefore, we have prepared some tips on how to treat serious jellyfish stings and handle any subsequent complications.

What happens when you’re stung by a jellyfish and what are the symptoms?

Injuries are caused by jellyfish tentacles which have hundreds of tiny spines with explosive cells (nematocysts) that immediately release poison. Some species have these stinging cells around the perimeter of their bell

Coming in contact with the poison causes itching, intense burning, tingling, and sometimes severe pain. This causes lesions to the skin, blisters form and a rash or swelling is also common. On top of this you may experience nausea, vomiting and fatigue or malaise.

Deceptively, the poison of some species has a delayed effect which can be unbeknown to the victim who may think they just scraped themselves somewhere whilst snorkelling. Therefore, it’s best to closely inspect any injury if you’re unsure of the cause. 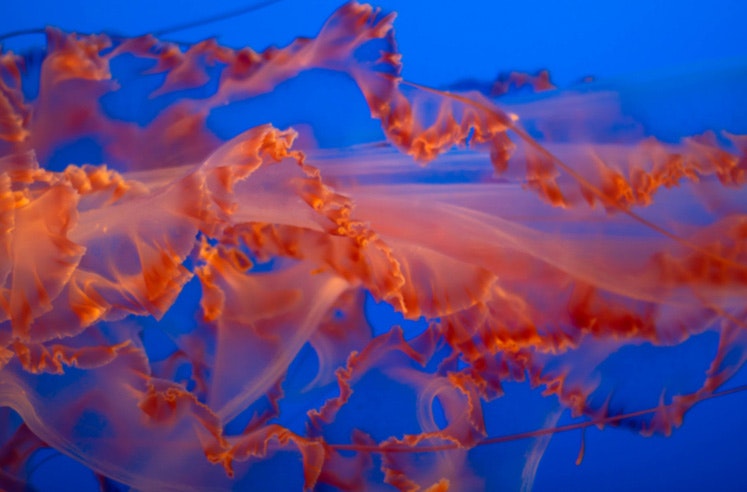 Stinging tentacles are dangerous and long

An encounter with the most toxic species, can cause a very severe reaction or paralysis of the central nervous system — causing severe pain, breathing problems, difficulty swallowing and, in extremes, respiratory arrest and unconsciousness.

First aid for a jellyfish sting that really works

When you’ve been stung by a jellyfish, reacting quickly is key. It is necessary to prevent the further spread of the toxin, that adheres to the body, as soon as possible.

Why? The toxin is a protein and must be disrupted or denatured to stop it performing its function, thus stopping it poisoning the affected area.

Rinsing with vinegar, scraping and hot air are the best when dealing with a sting

You can also administer painkillers, antihistamines and locally treat with Fenistil ointment and disinfectant.

What to look out for during treatment?

Never rinse the injured area with fresh water. This may release more toxins into the system.

Also beware of the fluid in the blisters. Even if you think that the wound is healing and the worst is behind you, the blisters may burst and “sting” you again. Such an injury can be seen in the following photographs.

Jellyfish (from left) 1. Fresh injury, 2. Secondary fluid blistering, and 3. Condition after a week

In the event of a severe reaction and respiratory arrest, cardiopulmonary resuscitation (CPR) should, of course, be started and the injured should be taken to the doctor as soon as possible.

What kinds of jellyfish are most encountered and which to avoid?

We currently know about 300 species of jellyfish. Most live in warm seas, and there are no deadly species living in European waters. However, some are increasingly being found in Mediterranean waters and the Baltic as a result of climate change. Let's take a look at the most famous species together.

1. Harmless species, not just found in the Adriatic

Also known as the common jellyfish or saucer jelly, it’s poison is not dangerous and basically does not sting. This pink beauty with it’s distinctive four-leaf clover can be found in European waters, as well aso in Egypt. It prefers less salty seas.

This common jellyfish, which is nicknamed the fried egg jellyfish is not dangerous and will not harm you in any way. 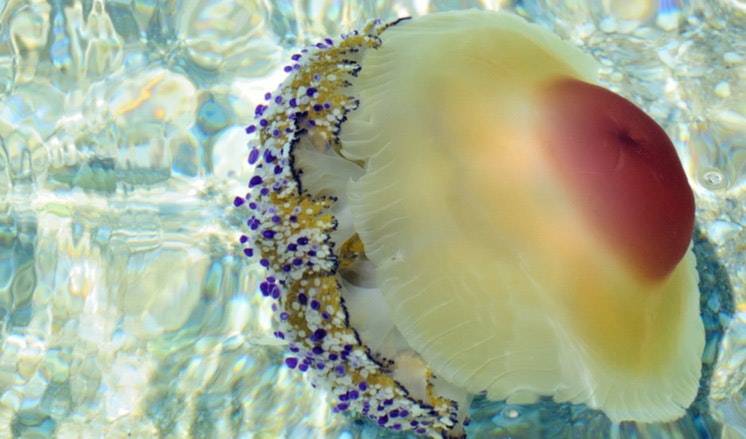 This large jellyfish with its fascinating curled arms occupies warm seas and the Mediterranean. It is also not dangerous and has a very weak sting. 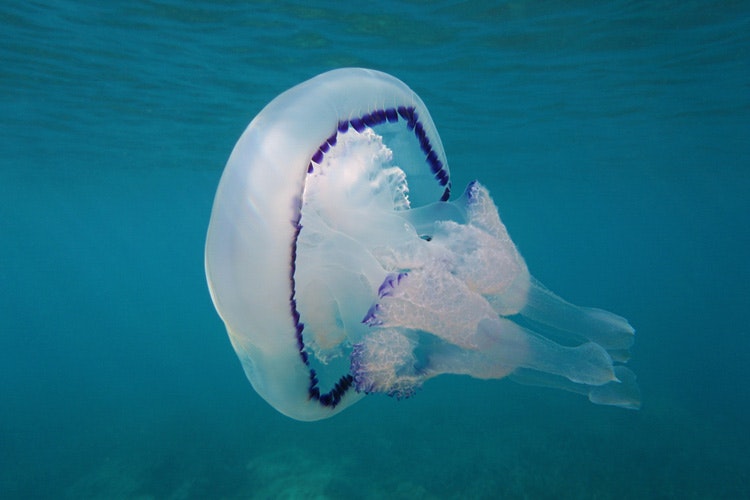 Its bell is blue-violet with pink tones and has a diameter of about 10 cm. It has four long oral arms with crenulated margins and eight (over a metre long) tentacles that emerge from the umbrella margin. Touching the tentacle of this jellyfish causes instant, sharp pain and blisters in the affected areas heal slowly. A more severe sting will result in nausea and vomiting, weakness, headache and, in rare cases, loss of consciousness. 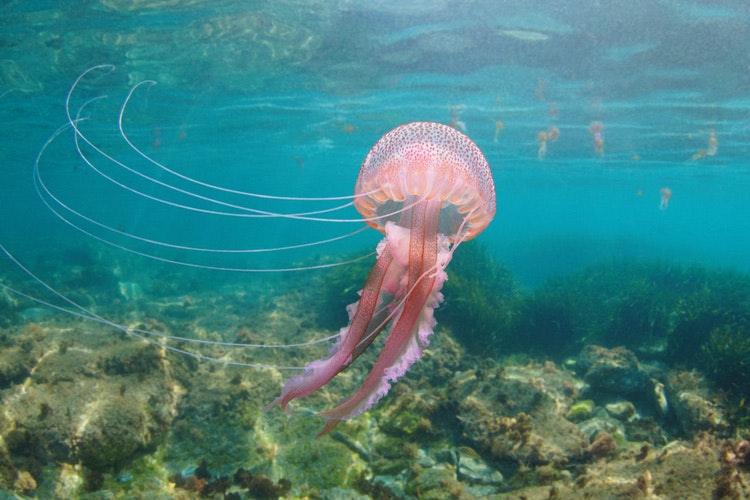 Diving and yachting together at last!

The most beautiful places to go snorkeling in Croatia

Also known as the "Portuguese man-of-war", it is not a true jellyfish but a siphonophore. It has a beautiful shimmering bladder and incandescent aquamarine shoulders. Its tentacles are about 10 metres long, but sometimes can reach up to 30 metres and it is highly dangerous. Its stings are ten times stronger than jellyfish, using a similar type of poison to the cobra (cobratoxin).

It has no means of propulsion and is driven by winds, currents and tides. Men o’ war live in the warm waters of the Atlantic, the Indian Ocean and the Pacific, and often thousands of them swarm together in a group. In the warm summer months they head north to the poles. They have been observed several times in the Mediterranean recently, including a killing off the coast of Sardinia.

This jellyfish nicknamed the Sea Wasp has taken many lives on the shores of Australia. Its box-shaped bell measures only a few centimetres, but from each corner grows 15 tentacles that can expand up to ten metres.

On its arms there are quadrilateral "hooks" that stab into the skin. The active substances are cardiotoxins, which cause severe pain, convulsions, breathing difficulties, rapid pressure increase and heart failure. It is even reported that the venom in an adult specimen is enough to kill 60 people.

During the dry season, it lives in the mouth of rivers among mangroves, and during the rainy season from October to May it is washed up on beaches in northern Australia. It also occurs in New Guinea, Thailand, the north of the Philippines and Vietnam. 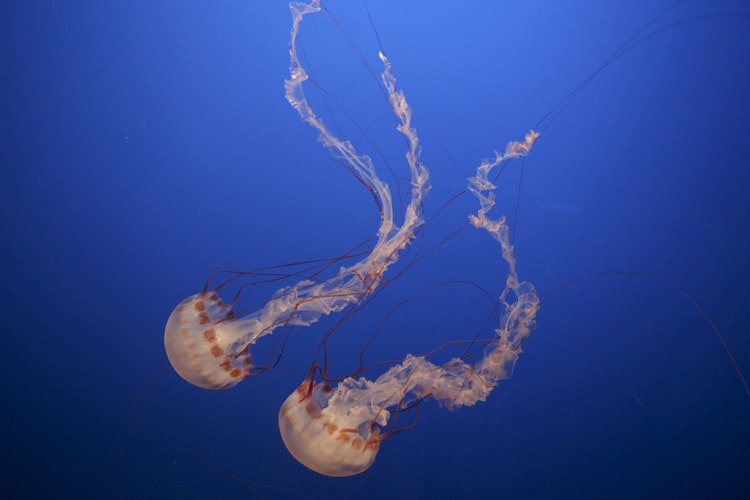 Skin contact with this tiny jellyfish does not seem dangerous at first, but the poison (allegedly a hundred times stronger than the cobra poison), begins to act in about 30 minutes and causes problems called Irukandji syndrome. They manifest themselves as unbearable cramps all over the body, back pain, kidneys, burning, vomiting, increased blood pressure, palpitations and fear of death. Symptoms persist for several tens of hours to days. 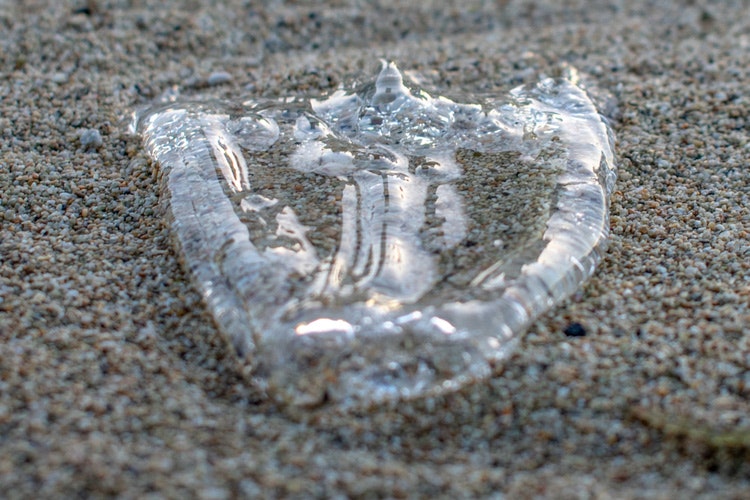 An interesting jellyfish (in fact, similar to a Portuguese man o' war,  in being a colonial organism) which can glide over the sea surface. It is found mainly off the shores of California, but has also been seen in the Mediterranean. 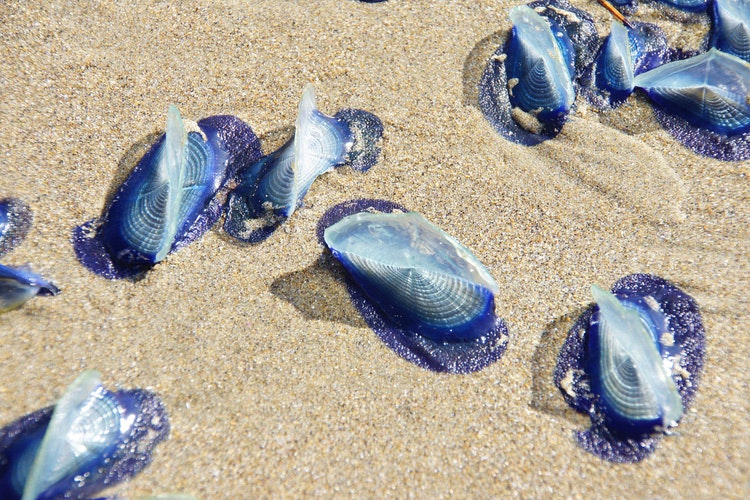 Encountering jellyfish when yachting is not usually dangerous and non-toxic species are stunning in their beauty and elegance. If you take our advice and act quickly when stung, you will usually get only small blisters and a bit of a fright. Yet, of course, caution is always advisable, and if you're heading into an area where poisonous species are present, it is worth looking around.

Are you planning a boating holiday? Email me or give me a call.