Traditional naval tattoos: what's the meaning behind them?

Anchor, swallow, mermaid, lighthouse — these are the most common motifs that sailors had tattooed on their skin. But do you know what exactly they mean?

Sailor tattoos go back thousands of years. While today anyone can get an anchor, a swallow or a sailboat tattooed on their body, in the past these tattoos had a distinct meaning. So, who were these motifs reserved for and what did they say about their bearer? Let's take a closer look.

The roots of traditional tattoos go back to the 16th century (from the Samoan word tatau, meaning "to strike"). They were brought to Europe by sailors as a souvenir from the Pacific islands, where the natives decorated their bodies with them. Originally, gunpowder and urine were used instead of ink.

Most commonly, tattoos served as a kind of logbook — a history confirming a sailor's experience at sea and a reminder of the places they'd visited and achievements accomplished. Certain motifs were also used to show their courage and skill.

What is the meaning of a swallow tattooed on a sailor? Or even two? One thing is for sure, you'd definitely have a highly experienced sailor in front of you. Only a sailor who had sailed 5,000 nautical miles was allowed to get a tattoo of a swallow. And why the swallow in particular? Strongly associated as a symbol of return, the swallow is able to cover great distances and still get back home. Because of this, the tattoo was also used for good luck and protection.

And if you saw a sailor with a tattoo of a swallow pierced with a dagger, they'd most likely had it tattooed in memory of a fellow sailor who'd died.

This tattoo could only be earned by those who'd sailed around Cape Horn — the bravest and the best, who had fearlessly set out on the high seas completely at its mercy. Similarly, only a sailor who had circumnavigated Cape Horn could wear an earring and always on the ear that had faced the mainland.

Even the humble turtle illustrated sailing experience and a turtle shell was proudly displayed by sailors who had crossed the equator. Tattoos depicting Neptune also demonstrated this fact.

YACHTING.COM TIP: Motifs from the animal kingdom were (and still are) very popular. Can you guess which sailors would get a polar bear tattoo? Unsurprisingly, it was those heroes who had crossed the Arctic Circle. Submarine crews in the navy got a dolphin tattoo and a shark was a symbol of protection and almost sacred respect (due to the shark's extraordinary abilities). For those who don't sail, it has become a symbol of sheer strength.

Dragon tattoos adorned sailors who had sailed in China. The golden dragon, on the other hand, was reserved for individuals who had crossed the International Date Line — an internationally agreed line that runs around the world at the 180th meridian, marking the transition from one calendar day to the next.

Rose pierced with a dagger

A rose pierced with a dagger is a symbol of a sailor who's brave and willing to battle against anything. Even against something as sweet and pure as a rose.

HOLD and FAST on the fingers

Fast reactions in poor weather conditions, holding the helm, and keeping the boat perfectly positioned are important skills for a sailor. HOLD and FAST inscribed on the fingers, one word on each hand, meant that if you were headed out on rough seas, you could be sure this sailor wouldn't let you down.

2. Tattoos of women, girls, and mermaids

These tattoos helped fill the void of loneliness and the absence of women on board (although there were exceptions) over long periods at sea. And occasionally they had specific meaning. 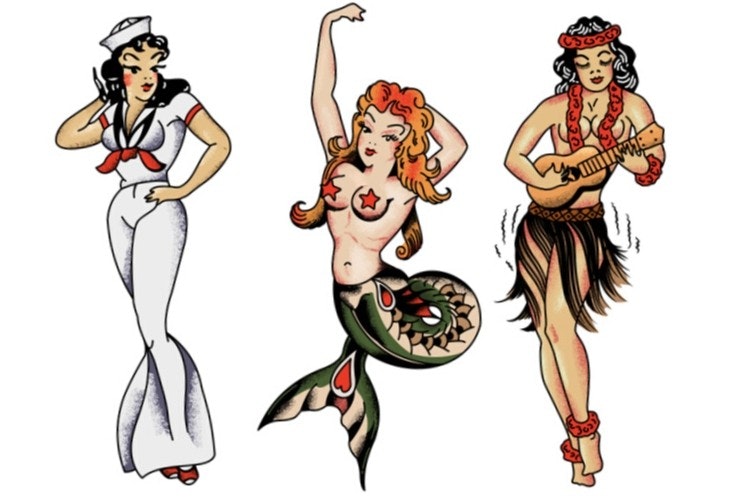 These beauties belonged to men who sailed in Hawaii.

This tattoo was simply a reminder of the love they'd left ashore.

Commonly chosen by those who wanted to demonstrate their love for the open sea. A sea that seduces them despite its inherent danger and unpredictability.

Top 7 yachting destinations in Greece in 2022

Top 7 yachting destinations in Greece in 2022

3. Tattoos for luck and for the superstitious

Sailing has always been a demanding and risky profession which led to a high degree of superstition. As a result, certain tattoos were inked in the hopes of warding off bad luck and bringing good fortune.

An anchor is the safest and most secure thing at sea, and it has long been a symbol of protection, stability, and security. Representing honour, loyalty, and, of course, hope, an anchor tattoo was frequently accompanied by a heart, the words "Mom" or "Dad," or a sweetheart's name. Anchor tattoos were also for sailors who had successfully completed a journey across the Atlantic Ocean.

The lighthouse is a symbol of light, hope and protection. Seafarers look to it and are guided by it in times of need. Occasionally, it could also symbolize God as the principal bearer of light.

For superstitious sailors, these animals were adorned as protection against shipwrecking and a guarantee of survival. But why these animals, which can't even swim or save us from drowning? The answer is that these animals were often kept on board in wooden crates which rarely sank in an accident, often being washed ashore with the animals still safe and sound.

These tattoos were worn on the feet or ankles. But if there was a pig on the left knee and a rooster on the right foot, then the tattoo signified the old saying: “Pig on the knee, safety at sea. A cock on the right, never lose a fight.”

YACHTING.COM TIP: Do you enjoy exploring the history of sailing?  Take a look at our articles about the mysterious world of seafaring customs and superstitions or the patron saints and protectors of sailors.

Purely for superstitious reasons, a nautical star or compass rose tattoo was to help sailors voyage at night and return them home safely.

4. Tattoos that represent a role on a ship

These tattoos are generally quite self-explanatory. For example, fishermen and members of whaling expeditions decorated themselves with a harpoon whilst crossed cannons indicated military service. So, what other tattoos showed a sailor's dedication to their role or their profession on a ship?

This tattoo was reserved for lower deck officers (lieutenants bosun — boatswain) and were worn on the hand between the thumb and forefinger. On the left hand, it indicated that the officer had sailed all the oceans and on the right, it showed that they had sailed the seven seas.

Rope tattoo on the wrist

A tattoo of a knot tied on a rope around the wrist was reserved for those who took care of the ship — the bosun and the deck officers.

In the 19th century, the red devil was a common tattoo for engineers, firefighters, machinists, electricians and all who worked in the engine room, known as "The Pit". The conditions and the extreme temperatures there were often likened to the fiery depths of hell :).

The dice tattoo was for risk-takers and those who loved to gamble.

And what do nautical tattoos mean today?

Nowadays, tattoos don't really tell us anything about a sailor’s experience but nautical symbolism is still very popular and when created by the hands of professional tattooists, they are beautiful works of art. 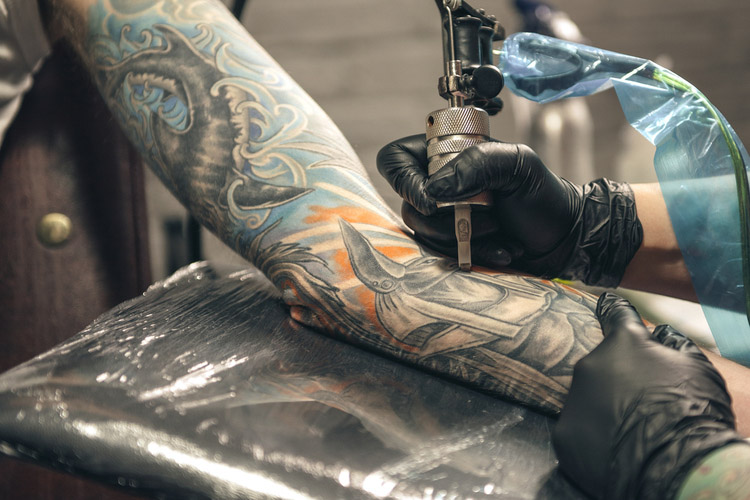 Want to earn another swallow tattoo? Simply choose a boat from our wide range and head for adventure on the open seas!

I won't be able to give you a tattoo, but I'll find you a great boat!