Gothic Ghent and Art Nouveau France: the best boat routes for the arts and the sights

Do you like active holidays exploring local sights and culture? This time, try it aboard a houseboat. Whether you head north or south, you're in for an unforgettable experience.

Do you love culture, charming town centres and stunning architecture but want to experience it in a unique way? Discover it from a whole new perspective on a houseboat. A morning coffee or an evening glass of wine on the deck of a boat will add a touch of romance to your holiday.

If any canal can be said to be iconic, it's definitely the Canal du Midi. It's a historical landmark in its own right and has even been a UNESCO World Heritage Site since 1996. At 240 kilometres in length, together with the Canal du Garonne, it connects the Atlantic to the Mediterranean. And the entire route from Toulouse to Sete is operational, navigable, and well set up for houseboats — moorings for smaller vessels can be found in every village and there are numerous marinas. Toulouse, home to one of the oldest universities in Europe, is an atmospheric delight in itself. Along the route, you can enjoy a wealth of sights and artistic gems.

The first is Carcassonne, the best-preserved medieval fortress town in Europe. Also a UNESCO World Heritage Site, this charming fortress is understandably popular with visitors, so patience is a must, especially in July and August. However, you won't be disappointed. In addition to the fortress itself, check out Le Pont Vieux bridge. Another great stop for history and culture lovers is Narbonne, a pleasant town dating back over 2,500 years. Its magnificent Cathedral of Saints Justus and Pastor can be seen from afar with a forty-metre-high nave that is one of the highest in France. Founded in 1272, it remained uncompleted — the original plan was overambitious with a lack of funding, there were disputes with the town's leadership and it was beset by disasters such as the plague. Check out the medieval towers of the Archbishop's Palace, now home to the town hall and museum, and the Basilica of Saint-Paul-Serge, a Romanesque-Gothic church dedicated to the first Bishop of Narbonne. Visiting this town, you're bound to be won over by its southern French charm and excellent wine.

Near the Canal du Midi is the town of Béziers, with a 13th-century Romanesque cathedral and charming views of the surrounding vineyards. Between Colombiers and Béziers, the famous cascade of locks at Foneserranes consists of eight locks and nine gates, which is an amazing experience in itself. Houseboats on the Canal du Midi

At the confluence of the rivers Scheldt (Escaut in French, Schelde in Dutch) and Lys (Leie in Dutch), this city is an absolute paradise for history buffs. The imposing palaces and cathedrals leave you in no doubt that this university and port city, mixing Gothic and Renaissance styles and located about 50 kilometres from Brussels, was an important and prosperous centre in the Middle Ages. Criss-crossed by a network of canals, it holds a special charm.

One of the reasons to come here is undoubtedly the St Bavo's Cathedral (or Sint-Baafs), built on the site of a former wooden 1st-century chapel. There are many works of art here, the most famous being the Ghent Altarpiece by brothers Hubert and Jan Van Eyck. The work, which consists of 18 panels of Bible scenes, has had a turbulent history, surviving fires, more than a dozen thefts, a poorly done restoration and potential destruction at the end of World War II in a depository at the Austrian salt mine in Altaussee — when the Allied troops approached, the leader of the regional branch of the NSDAP gave the order to blast the depository, but fortunately, this order was not obeyed. The Ghent altar has recently undergone a restoration of more than a decade, so if you truly want to admire it how it originally would have looked, this is the perfect time to visit.

The tower of St. Bavo's Cathedral is one of the "three medieval towers of Ghent", the others being the tower of St. Nicholas' Church and the ninety-one-metre high Belfry bell tower from the 14th century. These are worth a visit, as is the town hall. For art, you can also head to the town's museum with its collection from the Middle Ages to the 20th century.

When you need a break from the sights, take a seat at one of the local establishments. Ghent is a foodie's paradise — there are more than 700 restaurants offering cosmopolitan cuisine from around the world. If you want to try a Flemish speciality, you can try the Flemish stew (carbonnade), similar to beef bourguignon, but made with beer instead of red wine. As well as restaurants, there are countless cafés and bars, such as the Korenmarkt, which is a local centre of social activity. You can also relax perusing the local markets, such as the flower markets, or simply stroll along the charming streets. When you've had enough, unwind on board your houseboat and take in the cityscape and the calm waters. From Ghent, you can boat to another historic city, Bruges — a breathtaking city known as the Venice of the North. Try a five-day route from Eeklo via Deinze and Ghent to Bruges and back to Eeklo. 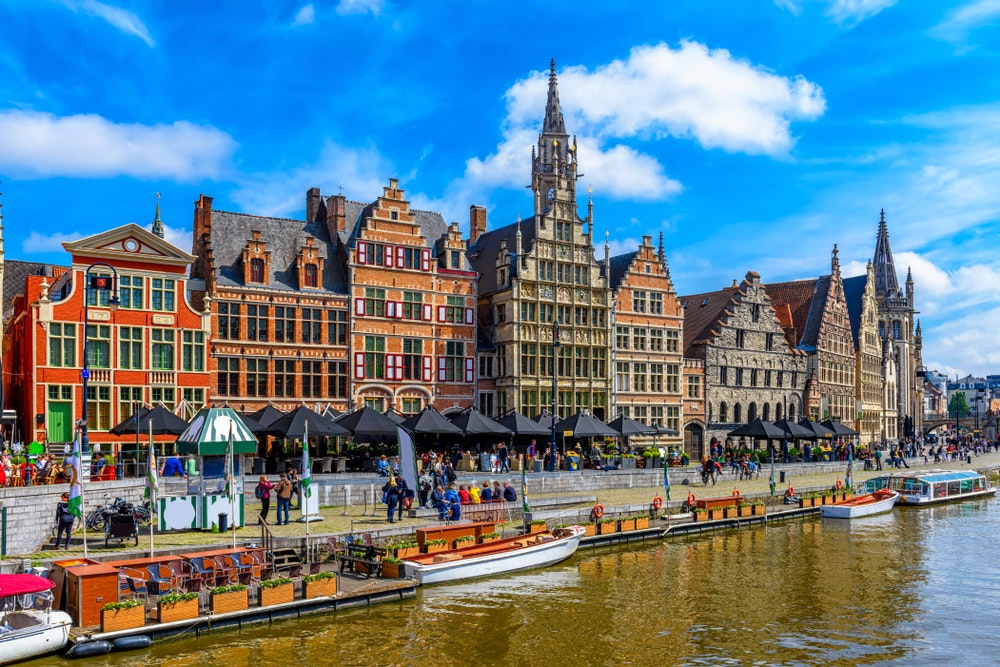 YACHTING.COM TIP: Are you tempted by a houseboat holiday but have no experience? No problem! We've put together 5 routes for beginners. All you need to do is choose whether you'd prefer to see the sights or relax on the tranquil waters of the lakes.

Combining the best of France and Germany, Alsace will appeal to those who'd like to enjoy fine French cuisine and atmosphere, but with a certain sense of calm and order. A houseboat cruise can take you to such gems as Strasbourg and its Cathedral of Notre Dame. The cathedral, whose construction began in the 12th century, is truly stunning and its 143-metre-high north tower was the tallest building in the world until 1874. As you walk through the city, you can admire the half-timbered houses in Place Kleber, considered one of the most beautiful old town squares in Europe, or the historic houses overlooking the river in La Petite France district. The Ponts Couverts bridges are also a renowned landmark. 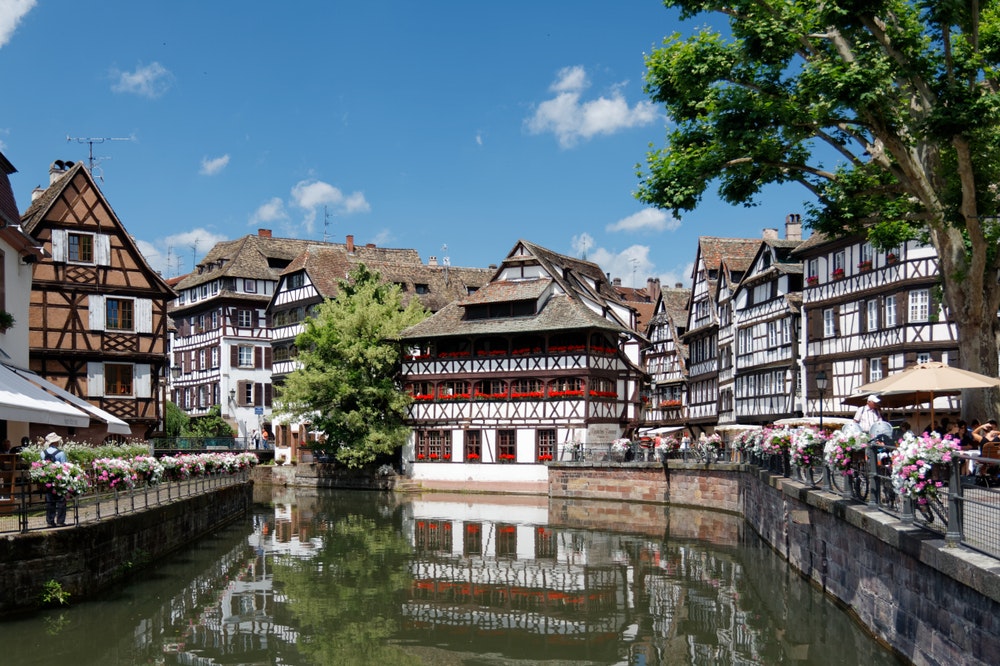 Canal and historic houses in Strasbourg

As well as medieval houses, you'll discover a number of Art Nouveau buildings in Strasbourg and the 19th-century Neustadt district (now a UNESCO World Heritage site, like the historic centre of Grande Île). Strasbourg invites you to just wander the charming streets and have a local Tarte flambée, a pastry, a glass of the infamous Alsatian white wine (or local beer), or homemade gingerbread. If you venture just outside the town, you'll find yourself in the countryside, where you can observe the numerous species of birds and unwind.

If you sail further afield, from Strasbourg, you'll pass through Saverne, home to a 15th-century castle and the church of Notre-dame-de-la-Nativité, and to the city of Nancy, whose three squares (Place Stanislas, Place de la Carrière and Place d'Alliance) are all UNESCO-listed for their historical value. This is the fifth largest university city in France, where you can also admire the late Gothic Lorraine Art Museum (originally the Palace of the Dukes of Lorraine) or the Baroque Cathedral Notre-Dame-de-l'Annonciation. There are also a number of magnificent Art Nouveau buildings in the city, as well as the Musée de l'École de Nancy. And, when you need a break from the sights, you can visit the local botanical gardens. From Nancy you can sail past the ruins of Lutzelbourg Castle

Offer of houseboats in France

YACHTING.COM TIP: France is a paradise for houseboat lovers, a country full of beautiful regions and places to visit. But how do you decide where to head? Take some inspiration from our article 11 places to go houseboating in France.

Berlin is a cool place and exploring it from a houseboat is even more so! Plus, if you love art and history, Berlin museums are the perfect place. It's hard to list just a few picks, but you shouldn't miss the Gemäldegalerie, which houses major works of European art from the Middle Ages to the 19th century — Botticelli, Rembrandt, Dürrer, Caravaggio or Vermeer. The Alte National Galerie specialises in 19th-century European art and features works by Cézanne, Monet, Renoir and Caspar David Friedrich. If you're more interested in the latest contemporary art, visit the Hamburger Bahnhof, the Sammlung Boros, also known as the Boros Bunker, or the KW Institute for Contemporary Art. A walk through the Holocaust Memorial is a powerful experience combining art and history. It can be a bit overwhelming, so plan a break in one of the cafes or restaurants here. What's great is that you'll find restaurants serving food from all corners of the globe. And the choice is yours, whether you want to soak up the atmosphere of the local bistros, or try one of the famed restaurants — try Eins44, an exclusive restaurant in a former distillery, 893 Ryotei for a fusion of Japanese and Peruvian cuisine, or if you're craving the best local cuisine, try Nobelhart & Schmutzig. All three of these restaurants are among the more expensive ones, but you'll also find plenty of cheaper eats in Berlin, such as the Syrian Malakeh or the typical currywurst stand Konnopke's Imbiss.

YACHTING.COM TIP: Did you know that Berlin has a 183-km-long network of canals that take you to almost all the main tourist attractions, including highlights as the Reichstag or the Chancellery? How about heading there for a long weekend?

The benefit of exploring Berlin from a houseboat is that you'll also be able to explore the surrounding area. You'll likely be sailing into Berlin from the north, either from the Wolfsbruch marina or Fürstenberg — so check out Rheinsberg Palace (Schloss Rheinsberg), where King Frederick the Great of Prussia spent his greatest days. The view of the castle from Lake Grienickersee is captivating, while the castle itself is brimming with artwork and transports you right back to the 18th century. Considered the German Versailles, head to the rococo palace of Sanssouci, with its delightful gardens. The great thing about houseboating in Germany is that you can explore history and art with the backdrop of the charming and romantic countryside. Plus, the German routes offer great facilities and well-equipped marinas, such as Marina Wolfsbruch or Fürstenberg. 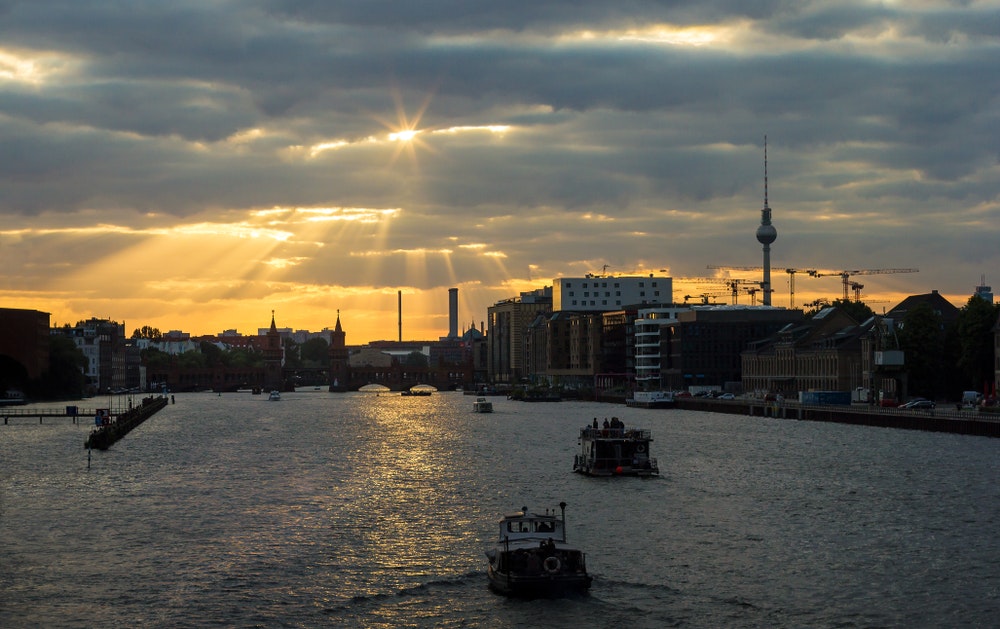 Our offer of houseboats

Not sure which houseboat to choose or which destination? Get in contact.