Are you tempted by a houseboat holiday but don't know where to start? Don't worry! We have 5 routes that are perfect for beginners. All you need to do is decide whether you’d prefer to take in some sights or simply relax on the tranquil waters of a lake

Who wouldn't want to cruise down a river, taking in the breathtaking views of unspoilt scenery and charming towns along the way? Experience all this by travelling in Europe on a houseboat — we've got the best routes for beginners, where you can enjoy everything these boats have to offer without any of the hassle. Whether you're after romantic France, untamed Scotland or the tranquil atmosphere of the German countryside, we have an itinerary for you.

Camargue in France — Canal du Midi is the best waterway

Wild white horses and sand dunes full of flamingos — does this romantic ideal come to mind when you hear the word Camargue? If you love nature and the sun, and want to experience the best of France, this is the perfect spot for houseboat enthusiasts, whether you're planning a romantic cruise for two, a holiday with kids or a trip with friends. There are very few locks in the Camargue region, and none on the Étang de Thau, so it really will be plain sailing (the ones that are there are electric and the lock keeper will be happy to help you). 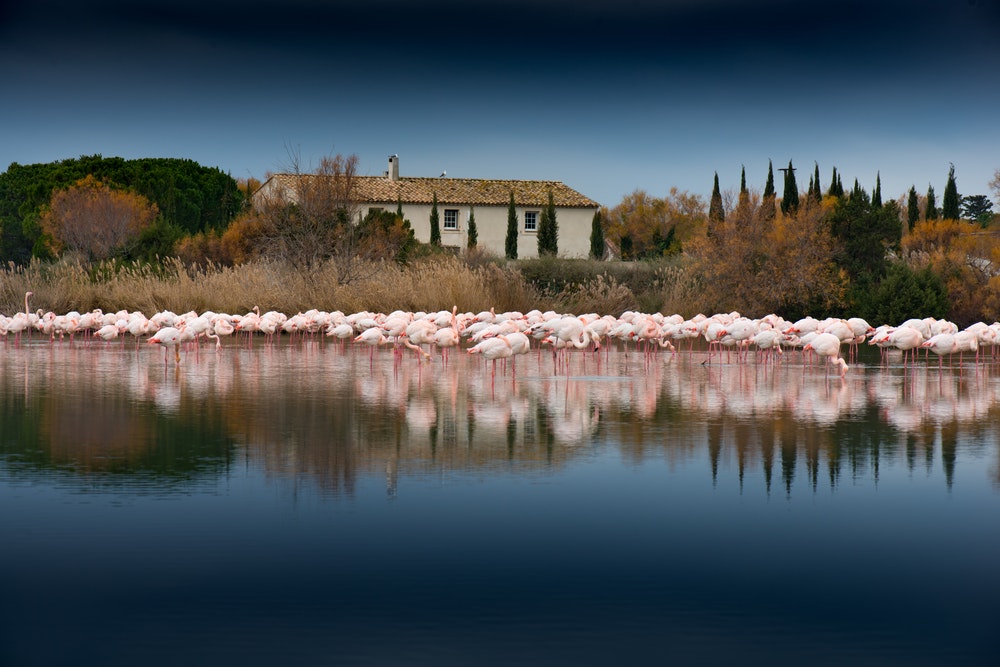 What you shouldn't miss during your trip? The Camargue Natural Park will take your breath away with its salt lakes and sand dunes, which are home to numerous rare birds and animals. But you'll also enjoy the atmosphere of the local medieval towns and the excellent cuisine (especially the oysters). Local attractions include a festival of Romany culture or the modern-day cowboys (called gardians). From April to the end of October, the weather is perfect for cruising around the Camargue region. For example, try a trip along the Canal du Midi, starting at Étang du Thau, France's second largest lake, and continuing along the Canal du Rhône à Sète for 98 kilometres to Beaucaire. Camargue is an excellent location for beginners, but keep two things in mind — watch out for high-wind warnings in the Étang de Thau area and larger cargo ships anchored in the harbours. Check out our wide range of routes in the Camargue area.

I want a boat in Camargue

The Mecklenburg Lakes in Germany — a houseboating paradise

When you mention boating in Europe, most of us think of the Dutch canals or a trip to the castles on the Loire. However, a true paradise for river and boat lovers awaits you in Germany. Mecklenburg, which lies in the north-east of the country on the Baltic Sea, is full of streams, rivers and lakes and will especially appeal to those who love tranquillity and unspoilt countryside. Much of this sparsely populated region of Germany has been designated a nature reserve, so most of the time you'll be accompanied by animals and birds. But you can also look forward to towns and villages with half-timbered houses, brick churches, country estates and windmills. 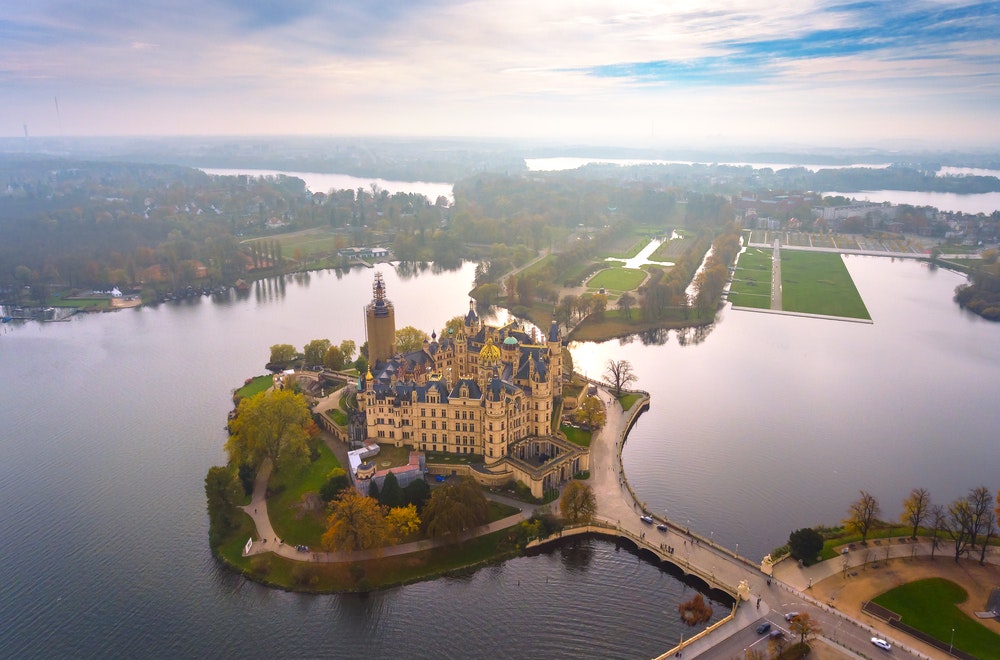 Another plus is the excellent local cuisine, fantastic swimming, opportunities for fishing and the cycling paths along the lakes. A great place to start your trip is Marina Wolfsbruch, a charming harbour surrounded by forests, from which you can head towards Rheinsberg Castle (you can also visit the local gardens and museum). Alternatively, head towards the town of Mirow, full of typical half-timbered houses, and continue on to Röbel and Waren. With more than 1,700 kilometres of coastline and bays in the Mecklenburg Lakes region, there are plenty of different routes and itineraries to plan and you can easily spend a week or longer there — choose the best route from our selection.

Our boats in Mecklenburg

The Masurian Lakes in Poland — a beautiful maze of waterways

The Masurian Lakes may be in Poland, but at first sight, the landscape is reminiscent of Scandinavia. These forty-five lakes are connected by canals in truly unspoilt countryside and it's no surprise there are 8 nature parks and 102 nature reserves in this region. During your voyage, you will be able to observe diverse wildlife — storks, beavers, and even wild tarpan horses. You can also go swimming (most of the lakes have sandy beds) or fishing, but be aware that this requires a special permit. 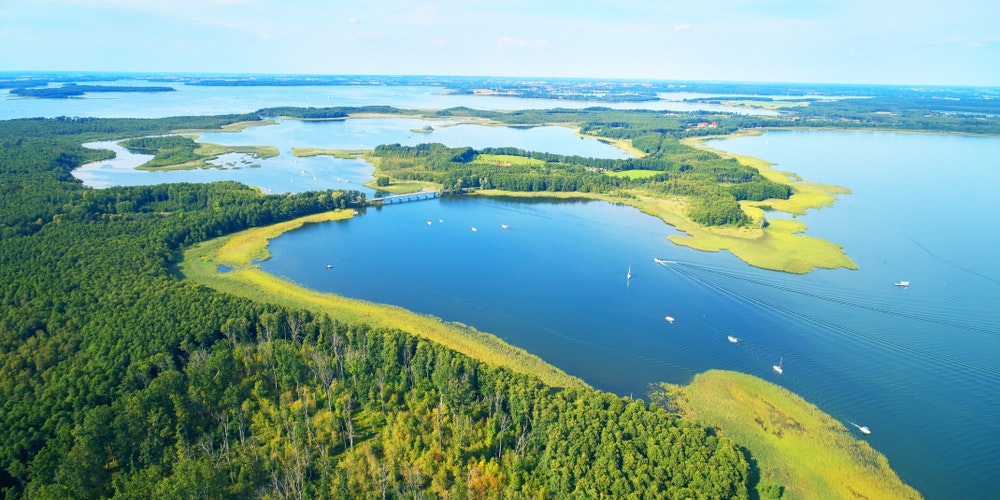 The most popular lakes are located in the north of the region — Kirsajty, Kisajno, Dargin, Swietsajty, Dobskie or Mamry. A unique feature of Lake Mamry is the unfinished Masurian Canal which began construction in the early 20th century and was intended to connect the Masurian lakes with the Baltic Sea. The project was never completed, but the Nazi eagles that adorn the locks serve as a reminder of its history. Lake Niegocin, located in the heart of the Masurian Lakes, is also a popular destination. If you go here, don't miss the town of Gizycko, right between the Niegocin and Lake Kisajno — local sights include the 14th-century castle built by the Teutonic Knights, one of the largest and most powerful Christian orders of chivalry in the Middle Ages, or Fort Boyen, one of the best-preserved 19th-century fortresses. Another interesting feature is the swing bridge over the Luczań Canal, one of only two swing bridges of its kind in Europe. You certainly won't run out of places to visit on the Masurian lakes — if you wanted to visit all the branches of waterways, it would be a journey of more than 300 km.

Our boats on the Masurian Lakes

A rugged, untamed yet romantic landscape, stunning views, and an omnipresent history that breathes from the surrounding villages and castle ruins. Welcome to Scotland! If you go exploring on a houseboat, you'll see it from a completely different perspective. The Caledonian Canal, which extends for 96 kilometres and connects the North Sea at the east of the island to the Atlantic Ocean at the west, is truly impressive. On the way from Inverness to Fort William, you'll pass through the infamous Loch Ness (keep an eye out for the monster), Loch Oich and Loch Lochy. You'll also see Britain's highest mountain, Ben Nevis, at 1,345 m (making it one of Scotland's Munros, mountains over 3,000 feet high). 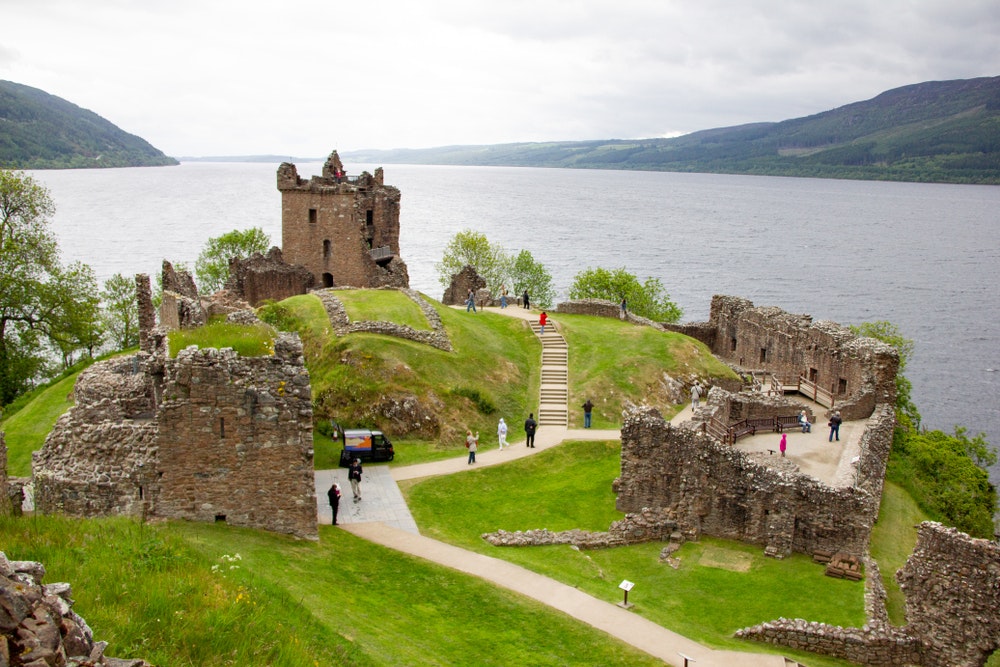 There's plenty to keep you entertained here — canoes, windsurfing equipment and water skis can be rented at numerous points along the banks. Other activities include eagle watching, mountain hikes, cycling along the canal paths and pony rides. You must make time for Inverness, the administrative centre of the Highlands and a city full of sights (the 12th-century castle, town hall and Old High Church, a 12th-century church dedicated to St Mary). Harry Potter fans should set aside a day to ride the West Highland Railway, which is the same route used by the Hogwarts Express. The ideal length of time to cruise this canal is a week or two — check out our itineraries.

Our boats in Scotland

Burgundy in France — a quiet cruise for families with kids

Good food, fine wine, no rush, beautiful landscapes and towns with that typical French charm — welcome to the Burgundy region of France — Franche Comté. The waters here are mostly mild and the fact that you can plan your journey with few locks makes it ideal for beginners. One option is the Saône River, which offers plenty of activities for parents and children alike. The Seille River, the smaller "sister" of the Saône, promises an even more leisurely ride. If you head there, visit the town of Louhans, with its beautiful half-timbered houses and excellent cuisine (the local speciality is chicken Brabant, Poulet de Bresse). 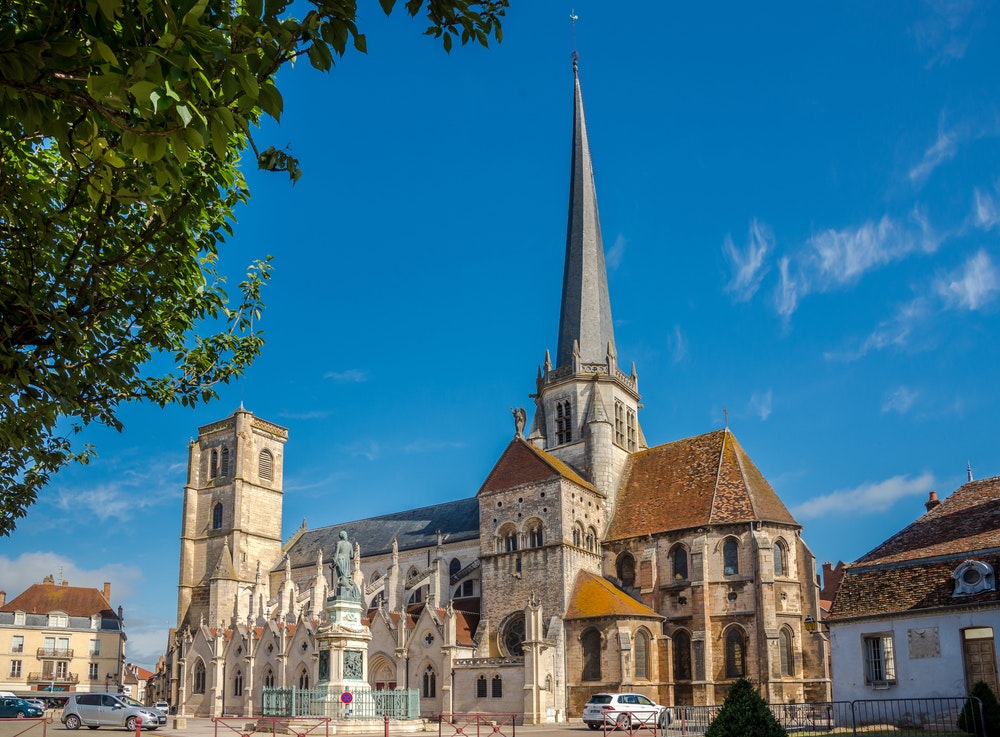 For beginners, we also recommend the section between St. Jean de Losne and Fontenoy le Chateau. This route will take you to Auxonne, the administrative centre of Burgundy. It was here that Napoleon Bonaparte attended artillery school, and today you can visit a museum in his honour. And even if you're not in the mood for history, Auxonne will charm you with its winding streets and great restaurants. Further along the route, you can also stop off at the old commercial port of Gray, with its Gothic houses and the Basilica of Notre Dame. As you walk through, enjoy a beef bourguignon with a glass of Chassagne-Montrachet. There are several routes to choose from.

Our range of boats in Burgundy

I know everything about houseboats. I will gladly advise you and recommend a suitable boat.