Turkey's coastline is far from surrendering all its treasures. One of the most beautiful sailing spots in the Mediterranean is waiting to be discovered.

The 10 most beautiful places in Turkey

Turkish waters are divided into two main regions: southern Turkey, which includes the so-called Turkish Riviera, and the southwestern to western Aegean Riviera.

A frequent port of call for sailors is Antalya on the Turkish Riviera. However, due to the heavy tourist traffic, we recommend sailing from Marmaris or Bodrum. A popular route is to sail from Fethiye to Cesme near Izmir. What is known as the Aegean Riviera refers to the part of the coastline from the city and port of Izmir to the south. It has the closest proximity to Greece and all the larger islands in this area such as Rhodes, Kos or Samos are still part of Greece.

The Turkish coast is an irresistible combination of stunning landscapes with deep wooded coves, warm sea, sunshine, very friendly, hospitable locals and good, cheap restaurants. All this makes it a promised land for many a sailor.

The rugged coastline offers plenty of opportunities for sailors who simply want to experience something different than the often overcrowded Croatia or Greece. This difference is obvious at first glance, as Turkey has an oriental charm that is unmistakable even from on board a boat. The cities and ports are orderly, the marinas are well-organised and well-equipped (sometimes luxuriously so).

Our Sales Consultant is here to help!

Originally a fishing village, Marmaris is now a yachting port with several marinas, such as Netsel Marmaris and Albatros, and a long and lively beach promenade. Marmaris can be found on the border between the Aegean and Mediterranean coasts of Turkey.

The view of the harbour, with its luscious pine-covered green hills and a mountain backdrop, is everything you dreamed of before setting sail in Turkey. Simply enchanting... and we've seen a lot of places.

Marmaris will win you over with its maze of old town streets and a history dating back to the time of Alexander the Great. 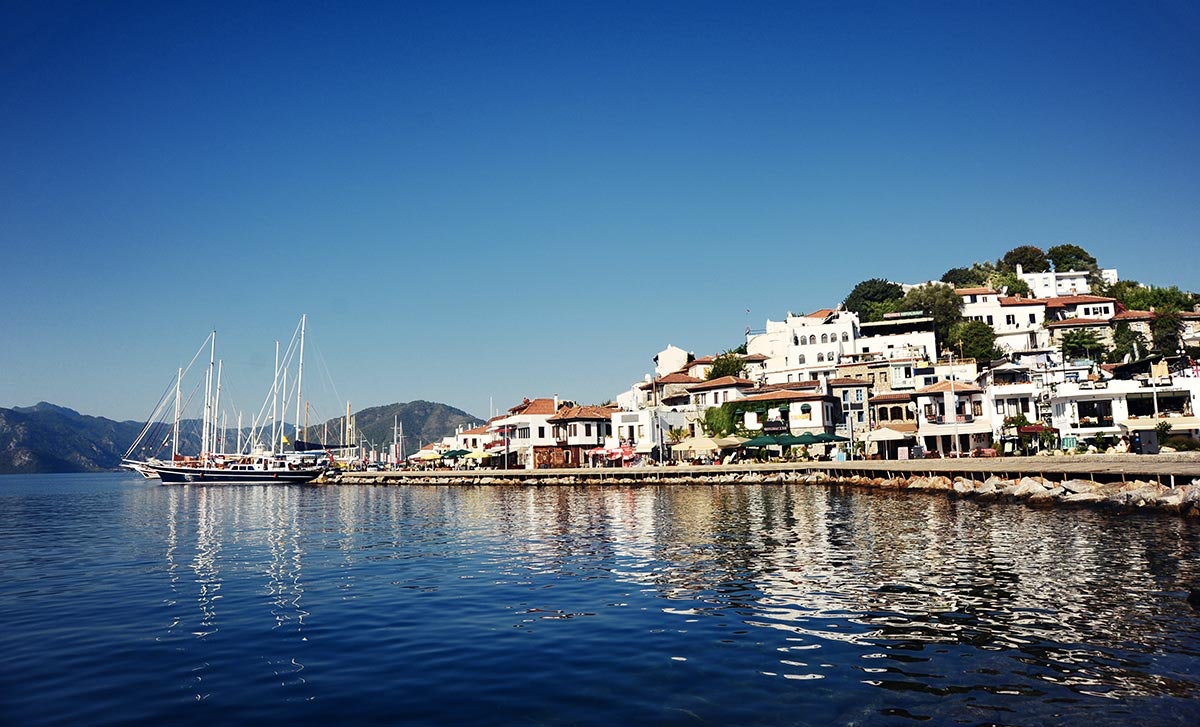 Sailing out of Marmaris

The bay around Marmaris is well protected and the sea temperature is one to two degrees higher than the sea along the coast.

About 20 NM east of Marmaris is Ekincik Bay where you’ll discover a picturesque village and pebble beach. You can either anchor here at the beach or by the cruise boat pier. From Ekincik there are half-day trips on local boats to the Dalyan Delta. For an additional fee, you can also sail to the freshwater lake Koycegiz Golu.

It is also possible to anchor in front of the beautiful sandy beaches along the Dalyan Delta on Delikada Island. However, the sandy beaches must not be accessed at night when sea turtles come out.

Ciftlik Bay is located 12 NM south of Marmaris and is well-sheltered by the islet of Ciftlik Adasi. Snorkelling around the islet is fascinating. You’ll come across numerous amphora shards as well as the remains of an ancient column. Less than a mile to the south is the delightful Gerbekse Bay with its sandy beach. It provides good shelter even in meltemi winds and is surrounded by the ruins of an old Byzantine harbour.

The bay of Serce Limani is located 22 NM south of Marmaris. It provides excellent shelter in all winds and offers a superb restaurant at the northern end. Bozuk Buku bay lies 2 NM southwest of Serce Limani and again offers a good place to retreat with several restaurants. A fortress from ancient times stands at the western end.

Marti marina is in the northeastern part of Hisaronu bay. A well-equipped marina, it is the only one in the area. A number of other nice small bays lie in the bay of Hisaronu along the wooded coastline. The long narrow wooded fjord of Bencik Koyu is also very picturesque.

The coastline heading west, towards the town of Datca, is lined with pine trees, small bays with pebble beaches and the occasional palm tree. You will find plenty of spots to anchor even in high season. Ciftlik Limani and Kuruca Buku are definitely worth mentioning. West of Datchi towards Palamut you can visit the attractive bay of Parmak Buku where the pine trees stretch all the way down to the beach.

Continuing westwards 8 NM, you will reach Cape Deveboynu, where the ancient port of Knidos is located. Ancient Knidos was one of the largest and most important ports. The remains of a well-preserved amphitheatre tower above the harbour bay. 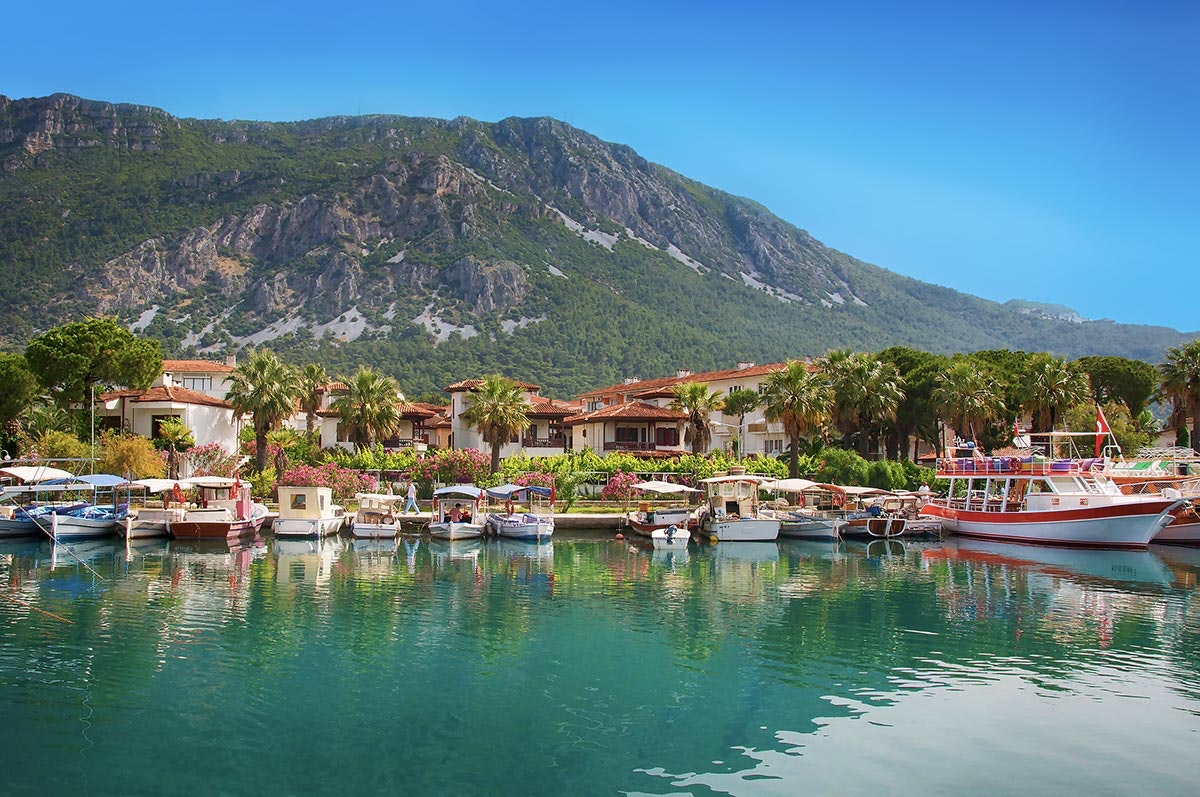 A great starting point for a voyage along the Aegean Riviera, it lies on a rugged peninsula that runs deep into the sea and is the vibrant centre of this part of Turkey. From Kos you're here in half an hour, from Rhodes in two. The town is bustling with activity, especially in the typical markets. In the harbour you can enjoy the luxury yachts and use the marina of Karada. The promenade is lined with shops, restaurants, bars and cafes where the nightlife ends at dawn.

If you dock in Bodrum for at least a day or two, make sure you explore the surrounding area. In terms of sights, it is one of the most renowned areas of Turkey. Nearby is one of the Seven Wonders of the World, the Mausoleum of Halicarnassus (Halicarnassus is the former name for Bodrum). In the renowned ancient city of Ephesus, you'll find a magnificent amphitheatre. 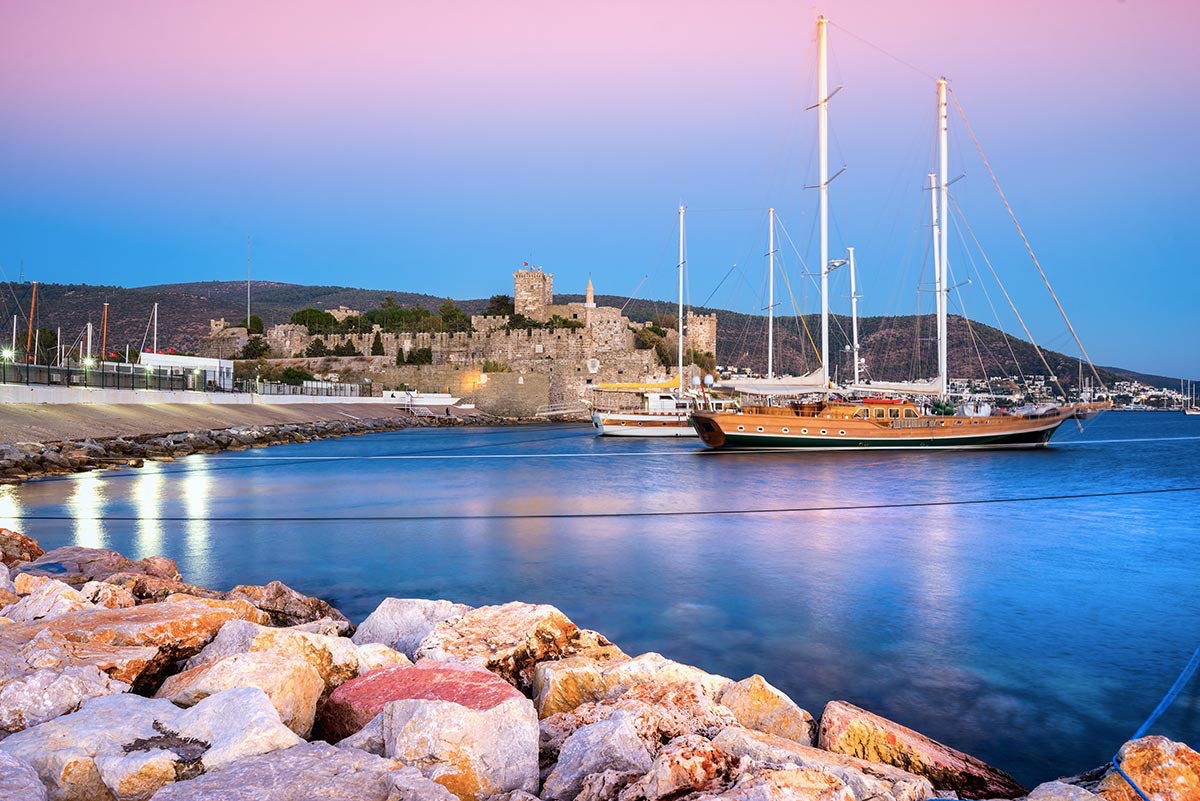 Sailing out of Bodrum

The climate in Bodrum is similar to that of the Aegean. Compared to Marmaris, the temperature here is about 3-4 degrees lower and the sea is also cooler, which is an advantage especially in the sweltering summer heat. In autumn, you’ll appreciate warmer sea and higher temperatures in the Marmaris region.

Bodrum is the mythical Halicarnassus, the site of an ancient Greek city, with its well-preserved amphitheatre and the site of one of the Seven Wonders of the Ancient World - the Halicarnassus Mausoleum. Bodrum is a large city and it would be best not to get stuck there for too long. The surrounding area is full of hotels and it is very touristy, so we recommend heading a bit further afield.

Sailing west past Cape Huseyin Buru and then northwards, is the picturesque port of Gumusluk with the remains of an ancient harbour. At the town pier, where there are a number of nice little restaurants and shops, you can moor with the bow at anchor and the stern ropes to the pier.

A more interesting route heads east to the large Gokova korfezi bay, where there are numerous little coves with sandy beaches. Among the most interesting spots are Panic, Kargicik and Cokertme where you’ll find a small village with restaurants next to the piers and a lovely sandy beach in the bay.

The most interesting route leads to Marmaris, so from the port of Knidos it is the same as a voyage from Marmaris. 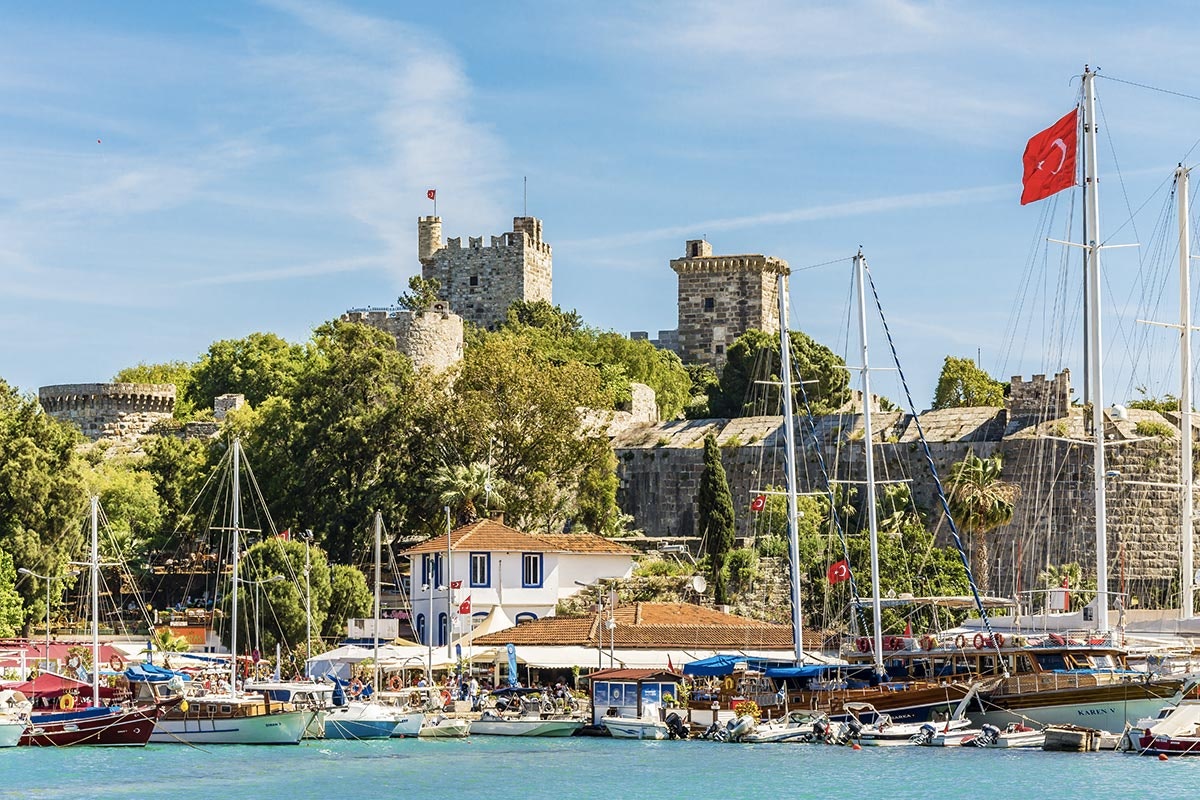 Weather and climate and when to sail to Turkey?

The yachting season in Turkey runs from May to early December. At the end of October and November, it is the best place to be on the Mediterranean as there is stable weather, sunshine and the sea is still warm. Turkey is therefore a great destination to end the sailing season or begin a new one.

Watch out for the Meltemi

The Meltemi, a powerful wind that blows from the northwest to the west, is a unique feature of the southwestern part of the Turkish coast and the Greek islands. It is more powerful in the open sea leading to large waves but grows weaker along the coast producing smaller swells. The strength of the Meltemi is influenced by the daytime thermals - the Meltemi is usually weaker in the morning but stronger in the afternoon and evening. At night it greatly dies down or is replaced by a night breeze.

Lying on the Mediterranean, this place is the bustling heart of the Turkish Riviera but definitely too lively for some. But it isn’t just packed with resorts, hotels, immaculate beaches, bars and restaurants, there is also the old district of Kaleici where you’ll discover ancient fortifications and Roman gates. In fact, in Antalya there is something for everyone, even mountain lovers. The breathtaking Taurus mountains loom above the city and their steep slopes fall practically straight into the sea creating an amazing panorama. They are perfect for a one-day hike and the view is stunning from the other side too. 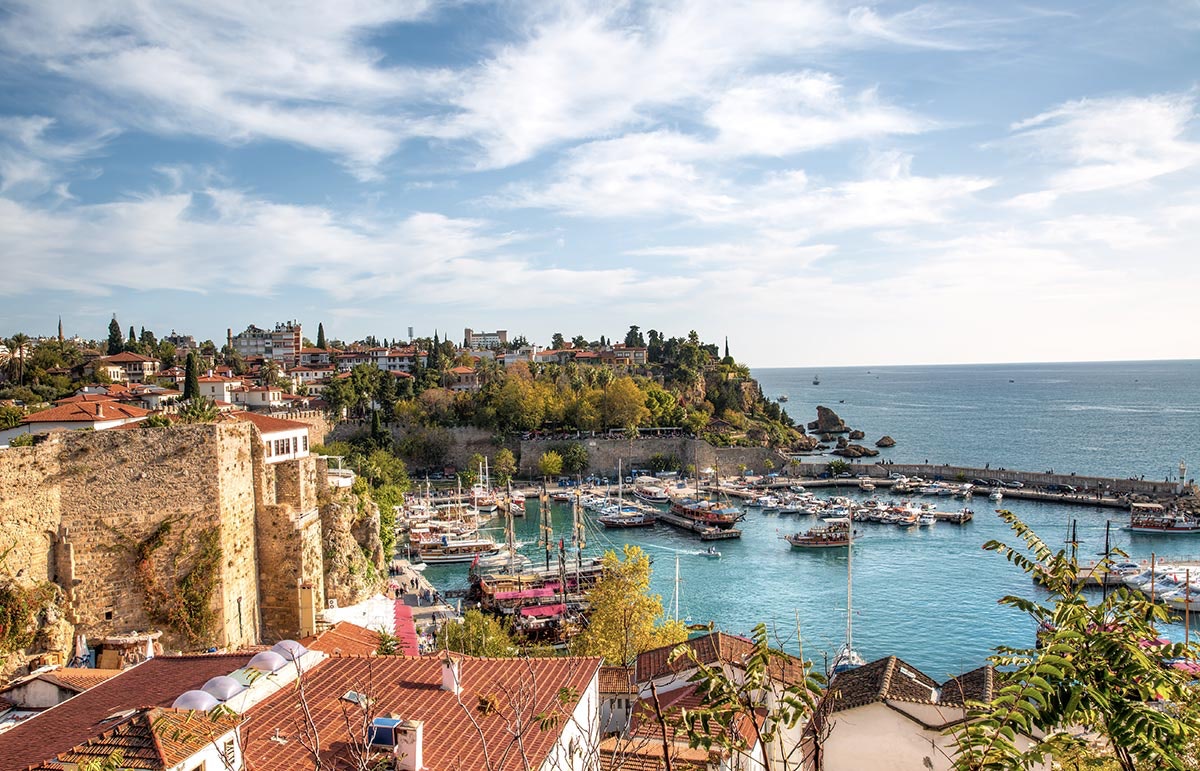 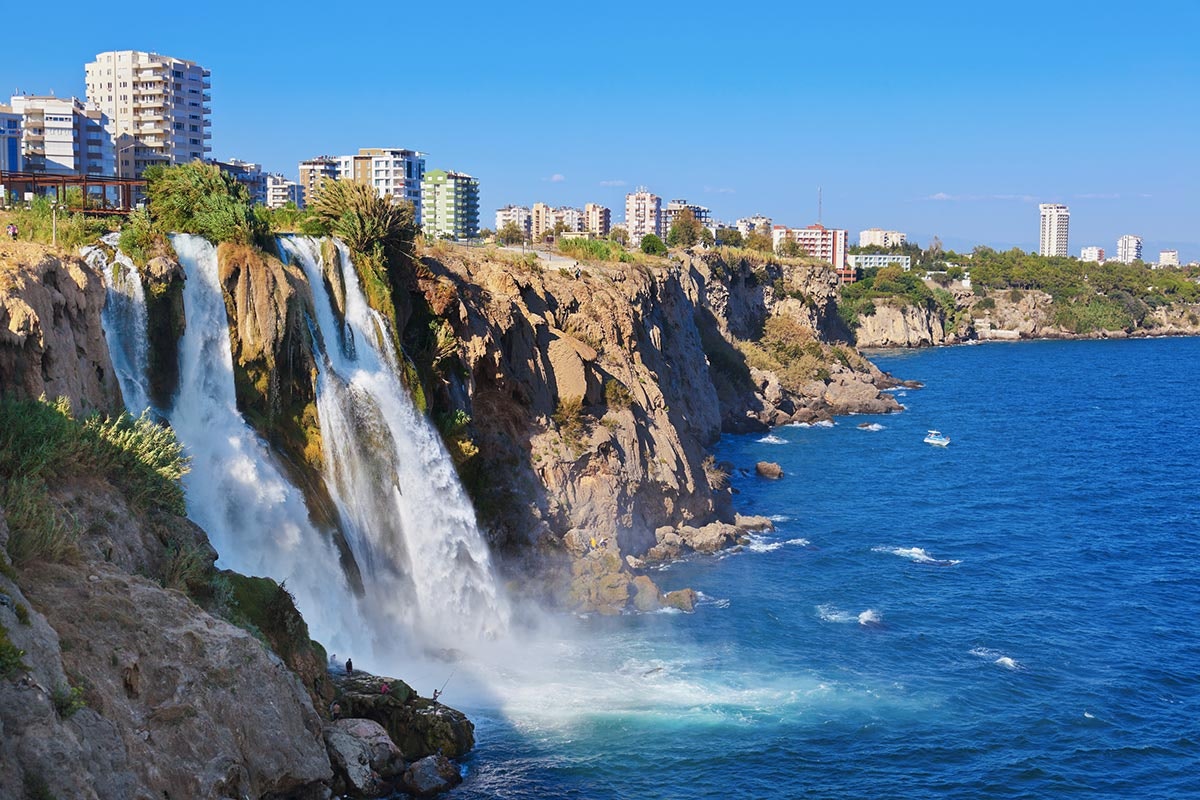 Ancient Ephesus is located only about 20 kilometres inland from the port of Kusadasi. Until 100 B.C., Ephesus was one of the largest cities of the Roman Empire. The region is also home to one of the Seven Wonders of the Ancient World: The Temple of Artemis. Just the ruins of this once magnificent city remain, but they are very well preserved. These include a giant amphitheatre, the Temple of Hadrian and the fabled Library of Celsus, which once housed 12,000 scrolls. 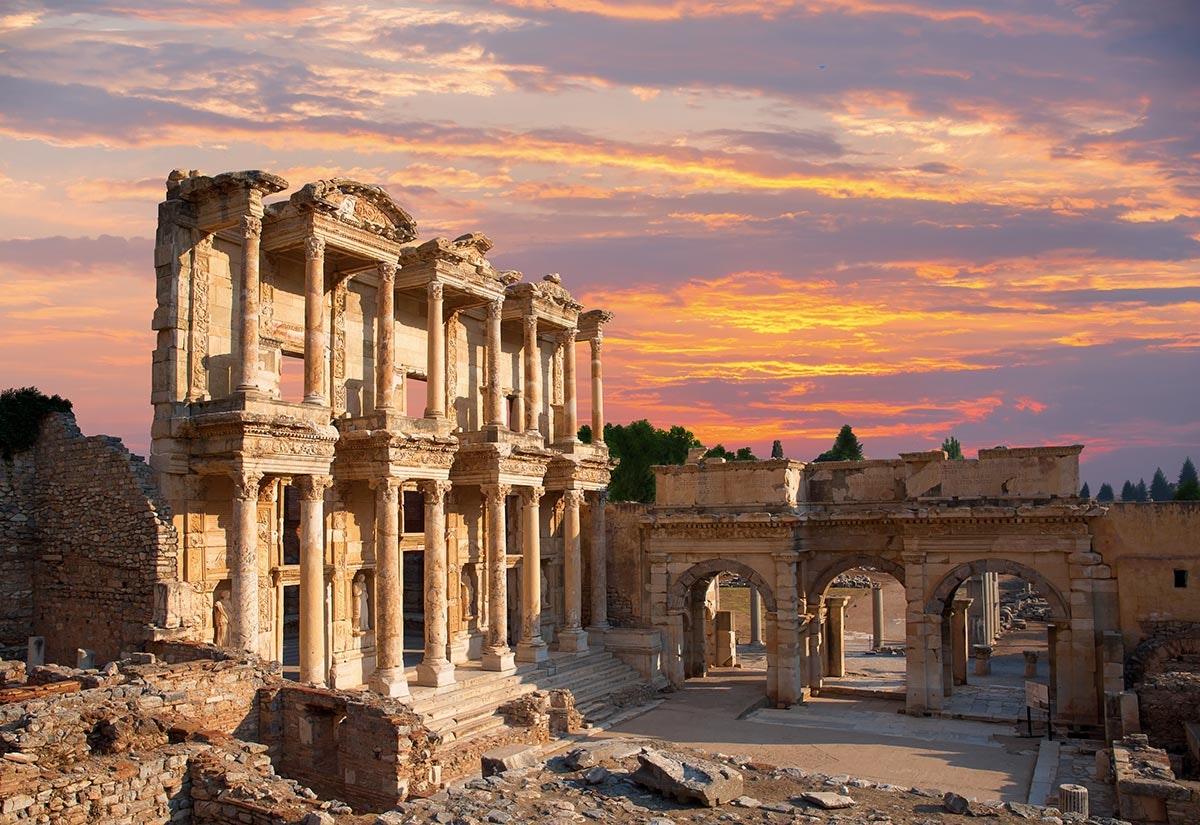 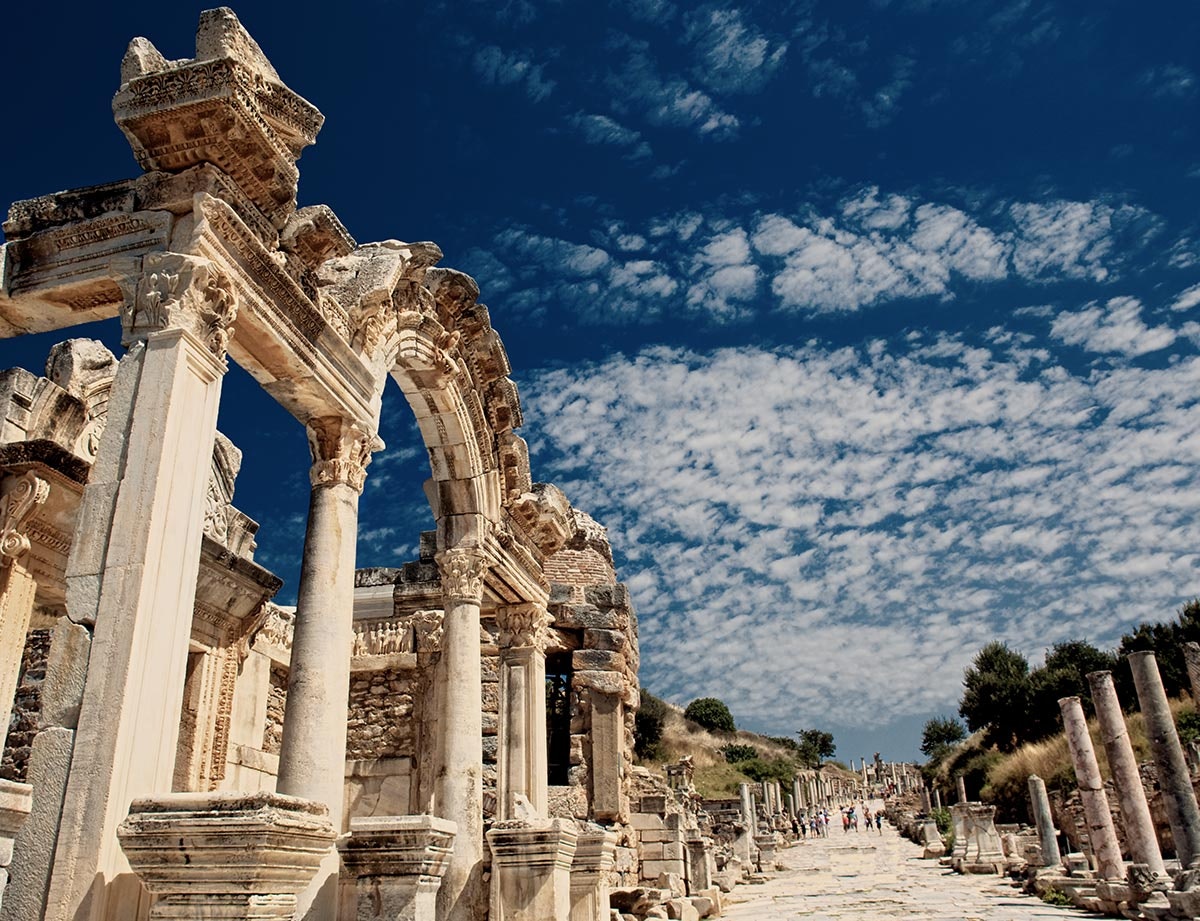 There's only one Istanbul. Once the capital of the Byzantine Empire and now one of the world's largest cities. It straddles the Bosphorus Strait, making it the only city to span two continents. There are too many unique things about Istanbul to list here. Hagia Sophia, the Blue Mosque, Topkapi Palace... Istanbul is well worth seeing, and its oriental charm amidst the chaos of a metropolis of millions is unmissable. 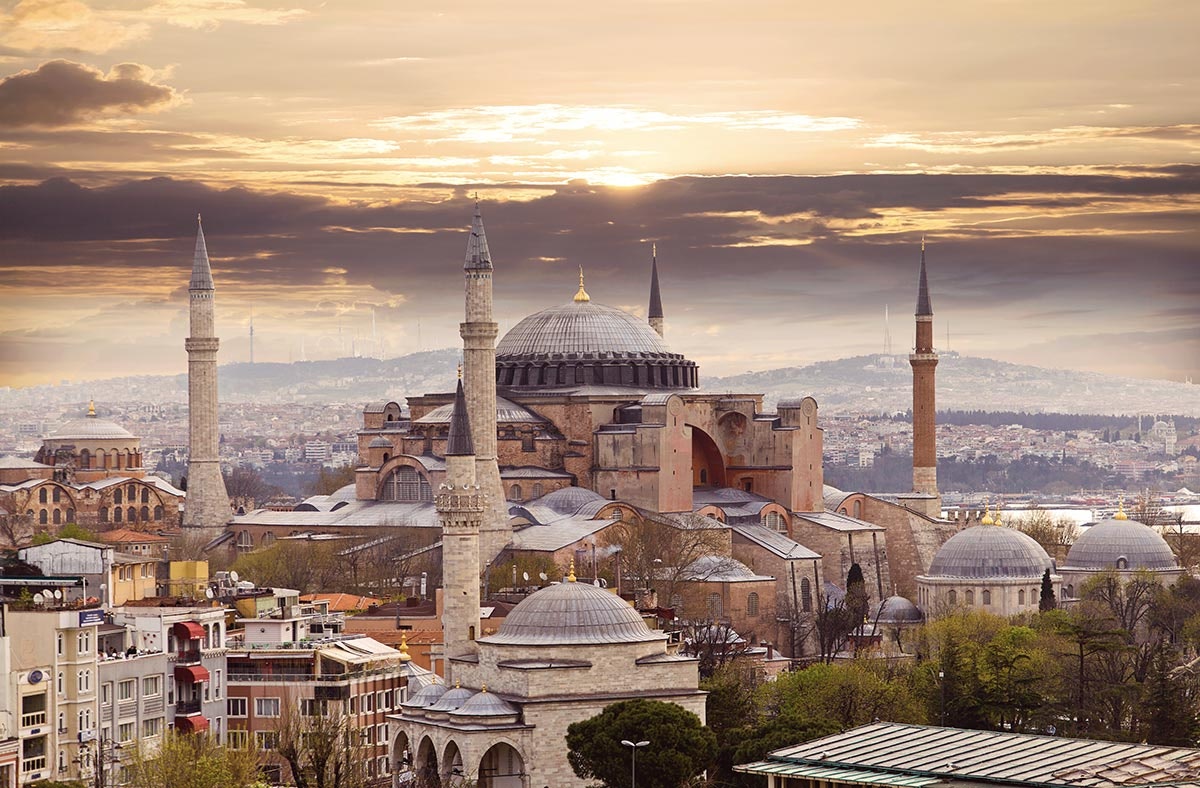 Turkish cuisine is delicious. You'll find mouth-watering food at every turn, costing less than you'd expect, and the locals are hospitable and friendly. The cuisine is a blend of many influences: Arabic, Balkan and Indian. In coastal areas, it also includes elements typical of other Mediterranean cuisines.

For example, tzatziki (cacık), cevabcici (kebab) and yoghurt (yogurt) all originate in Turkey, which gave them their name. Apart from tea, typical drinks include ajran,  and Turkish coffee brewed in a special metal teapot called a jezva. 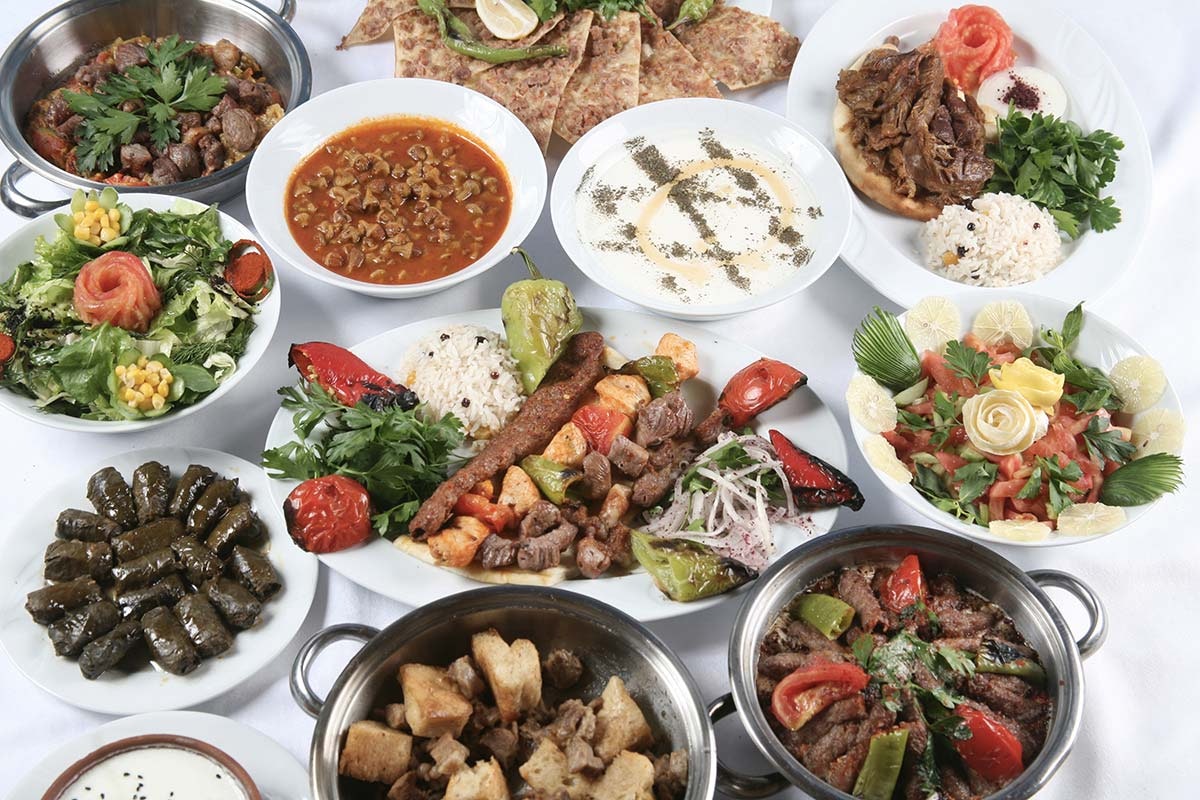 The Turkish coast is easy to reach, and it depends solely on which port you choose as your starting point. Direct flights go to the bustling Antalya as well as Bodrum or Dalaman.