The islands of the Saronic Gulf are among the most beautiful and most interesting of all the Greek islands.

The 10 most beautiful areas in this region

The Saronic Gulf is located near Athens. In addition to historical gems, you will find long stretches of sandy beaches lined with fragrant pine forests. The sparkling sunshine and crystal clear seas tell you that you will find a huge number of sailing boats, catamarans, and motor yachts to rent in this area. The charming fishing villages and bays cry out for you to anchor in them. Monuments of world heritage such as the amphitheatre in Epidaurus or the Temple of Aphaia on the island of Aegina serve to underscore the attractiveness of this area. 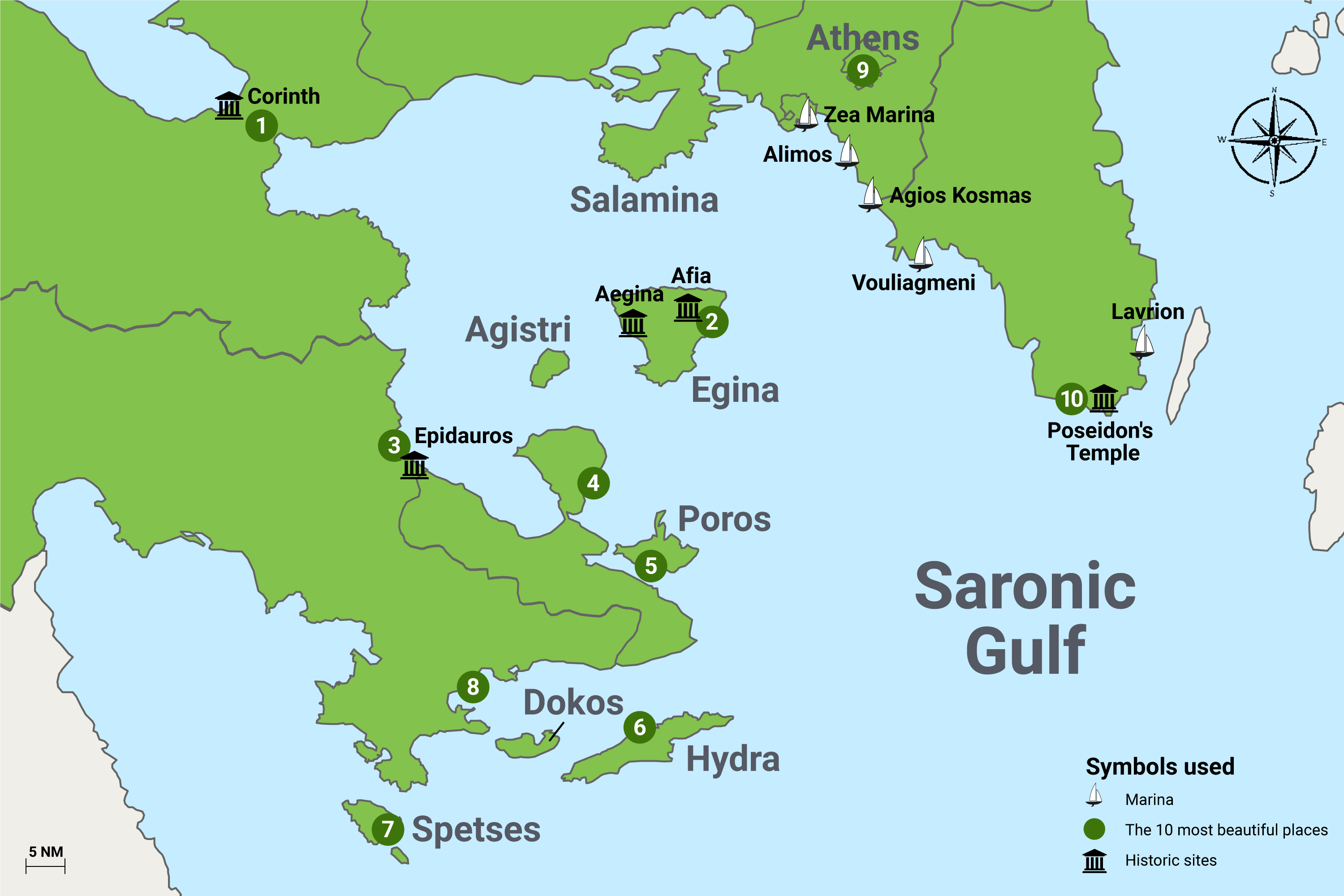 Thanks to its historical monuments, location, and yachting conditions, this area is a very popular destination in the Aegean Sea visited by many people. You can find several fascinating places in the Saronic Gulf where you can admire the beauty of ancient Greece. These include Athens itself, the island of Aegina, the island of Hydra, the Corinth Canal, the picturesque island of Poros, and many more.

The Saronic Gulf region is relatively far to the south of Greece, so summers here tend to get very hot. In the high season (June to August), temperatures reach up to 33°C. Winters in this area, however, are particularly mild, so it is common that people sail here even around Christmas.

SE winds prevail in the Saronic islands. The Meltemi winds are not too strong in the Saronic Gulf, so yachting is quiet smooth with a strong Meltemi. The undemanding sailing conditions make this area suitable for a peaceful family holiday or the novice yachtsman. In the July to August period, gusting winds can achieve a strength of 5-6 on the Beaufort scale (BFT).

Athens is situated on the Attica peninsula near the Saronic Gulf. The city is surrounded by the Ymmytos, Pendeli, and Parnitha mountains in the north and the east.

Athens, considered to be the birthplace of civilisation, is the subject of the world’s most famous story. One legend says that two Greek gods fought for the favour of this city. The two gods were none other than Athena, goddess of war and wisdom, and Poseidon, god of the seas and water. Both of them offered gifts to the city of Athens. Although Poseidon gifted the city a water spring when he hit a rock with his trident, Athena gifted the city an olive tree and she won the contest.

Athens is the birthplace of democracy and of most philosophers of the ancient Greek world. Athens, as one of the strongest city states during the ancient times, survives to this day thanks to its historical sites and tourism.

Athens is one of the most frequently visited destinations worldwide. You would hardly find someone who has not heard of the Acropolis in Athens, the Temple of Zeus or the Parthenon. Tourism also thrives owing to the local climate, with pleasant temperatures even during winter. The streets exude the famously easygoing atmosphere of the temperamental Greeks and the aromas of magnificent Greek cuisine, its exciting history also ever omnipresent.

Athens is perfectly situated as an excellent starting point for trips to surrounding areas. You can set out for more remote and less frequently visited beaches, on trips into the mountains or any of the Greek islands.

The island of Aegina is one of the most popular tourist destinations mainly because it is the island closest to Athens (just 16.5 NM from Pireus port). Picturesque island Aegina competed with Athens in the 5th century BC for business, economic, cultural, and political dominance.

The island’s most famous historical sight is the Temple of Afaia built in the Doric manner. The temple is 15.5 m wide and 30.5 m long. It has six columns along each of the shorter sides and twelve columns along each of the longer sides. A cult statue of a goddess protected by wooden bars once stood at the front. The entire building except for the gable and the roof is built from local limestone.

Jannis Kapodistrias was the first representative of modern Greece. In the first half of the 19th century, he had a army barracks built on the island and the building was later used as a museum, library and school. He also had the seat of the government established here for 300 days in 1828. These days, you can only find a monument here, in honour of the first President of modern Greece. The island is currently best known worldwide for its delicious pistachios. Pistachios marinated in honey are the local speciality.

Although the island is small, it boasts a number of historical sights and a natural beauty. The famous Temple of Afaia, which stands on one of the points of the equilateral triangle formed by this temple, the Parthenon, and the Temple of Poseidon, is probably the island’s most frequently visited tourist attraction.

A remote hill with the remnants of a Byzantine village is located only 6.5 km east of the town of Aegina. More than 30 original chapels, some of which have been refurbished, are built into these heights. A network of paths lined with beautiful wild flowers in summer connects the chapels. The original town of Paleochora, the island’s capital from the 9th century to the medieval times, was deserted relatively recently, in 1820. Paleochora can be reached by bus directly from the marina. 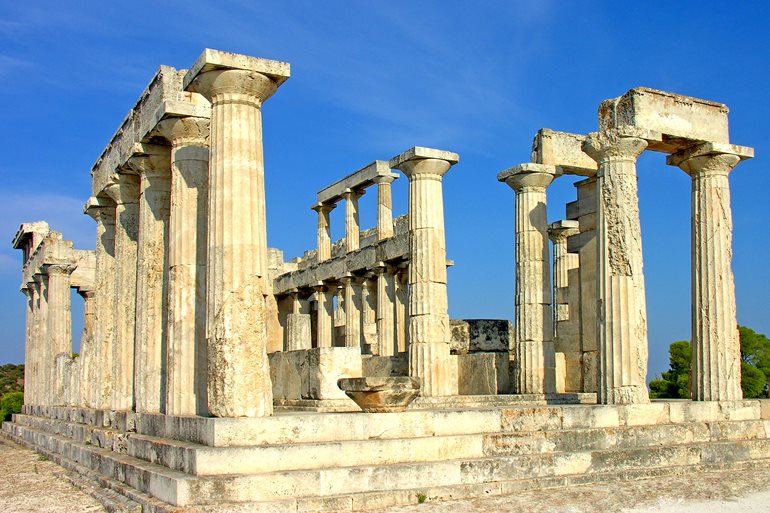 The small Greek island of Poros lies to the north of the Peloponnese. Similar to the other islands in this area, it was formed by volcanic activity. It took its name from the 400 m wide straits (poros) that separate it from the village of Galatas on the mainland. The island has an area of 31 km square and around 4 000 people live there, most choosing to live in the capital, Poros.

On this island you will find fresh pine trees, azure blue waters and clean beaches. The seafront with shops, cafés, and restaurants completes the idyllic seaside atmosphere. Though you won’t find many places of interest here, as people come mainly to rest and enjoy the hospitality of the local people.

The island of Hydra took its name from the monster of the same name with the body of a snake and nine dragon’s heads. The town of Hydra is built on a slope in the shape of an amphitheatre with a view of the Argosaronic Gulf.

Thanks to heritage preservation, small, traditional stone houses in a maze of cobbled lanes have retained their original appearance dating back to the 1820s. The ban on motor vehicle use as a means of public transport also explains why Hydra has retained its characteristic atmosphere to this very day. Opulent stone dwellings owned by prominent families reveal the rich history of the island. In the past, the island experienced exceptional economic growth, especially thanks to its large-scale naval and commercial activities. Most of these residences are currently museums. One interesting fact is that such a small island is the birthplace of five Greek prime ministers!

People move around the island on donkeys or on foot. Its charm is rounded off by the traditional Greek cottages, old town houses, stone paths, and the incredible peace and quiet flooding the lanes when the tourist boats leave in the evening. 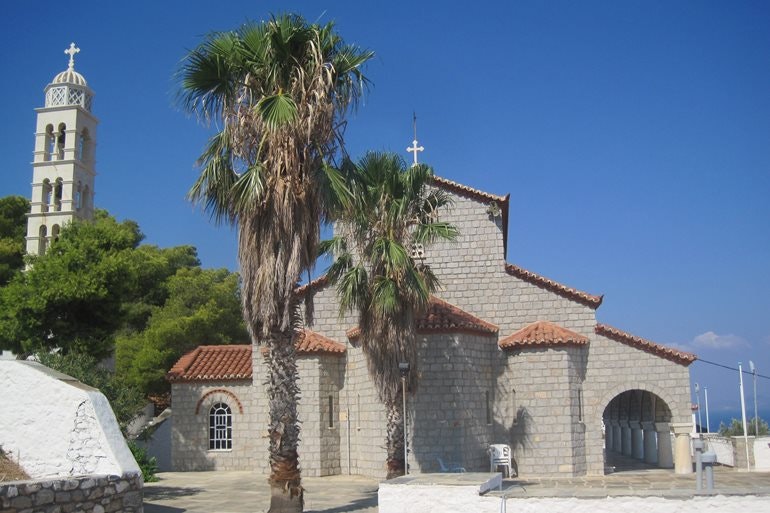 Spetses is an island and municipality in the Saronic Islands boasting a long naval tradition. It is known for its significant contribution towards the struggle for independence. It has been possible to preserve the traditional character of the island thanks to the absence of motor vehicles. The most common means of transport include walking, horse-drawn carriages, bicycles, mopeds and motorcycles.

The town of Spetses is the only large settlement on the island. It numbers around 4 001 inhabitants. The little town of Spetses boasts a lovely harbour and typical Greek buildings. In the capital of the island of Spetses, you will find a lot of bars, tavernas, discotheques and establishments with bouzouki music. The island’s rich history and naval tradition are reflected in several places that are certainly worth visiting. The charming old harbour of Paleo Limani, the Ayios Nikolaos Cathedral, the Church of Panayia d'Armata are literally urging you to visit them. Apart from the historical monuments, it is also worth visiting the quiet little villages inland, for example Agia Anargiri.

Sun worshippers will certainly be catered for on the pebble beaches here. There are some sandy beaches as well and elsewhere, there is a cliffed coastline, but on all of them you can expect superb conditions for snorkelling. Some of the beaches are shaded and lined with pines, while others are completely exposed to the blistering Greek sun.

Just like almost every country, Greece too, has its own unifier and liberator—the heroine, Bouboulina. This general of the Greek navy played an important role in driving out the Turks in 1821 and liberating Greece. She hoisted her own Greek flag on her ship the Agamemnon and set sail with eight other ships to Napflio to begin a naval blockade. She died a tragic death as the result of a family feud, shot in the head by an unknown assailant. The house where she was born has been transformed into a museum where you will find the heroine’s coffin and the figurehead from her ship. The surrounding area comprises a wonderfully maintained garden and knowledgeable guides will show you around the museum, some of whom are even members of the Bouboulina family. 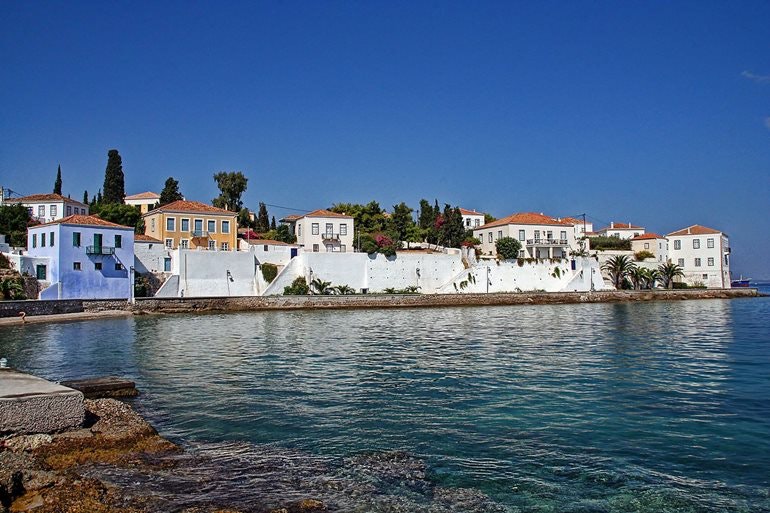 Agistri is a small island near Aegina, situated only 19 NM from the Port of Piraeus. This small, charming island with a population of less than 1 000 is renowned for its beautiful sandy beaches, sky-blue water, pine trees and lush vegetation. The island is also well known as the first contemporary location in Greece with nudist beaches.

Three large settlements are situated on the island—Megalochori (or Milos), Skala, and Limenaria. Skala and Megalochori are the two largest villages. The island offers a great variety of activities. Water sports can be found around Skala and Aponisos and, for example, horse riding is available in Megalochori. 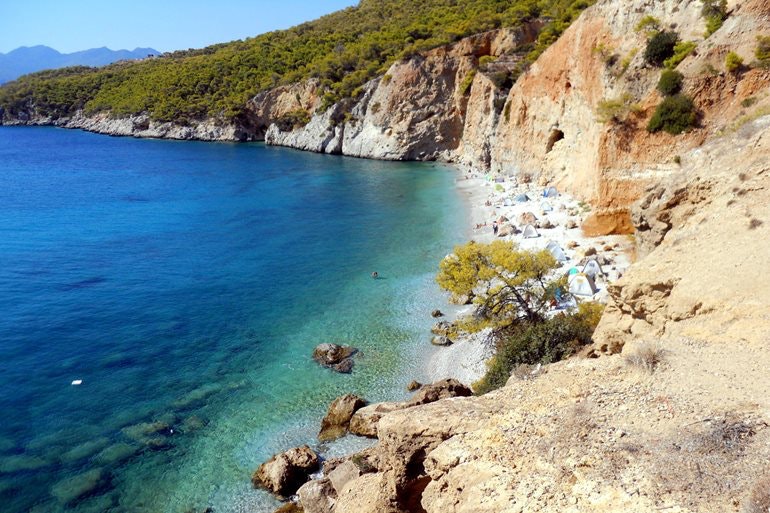 The following map shows the recommended route for the Saronic Gulf. For more details about routes and individual locations, click on the icon at the top left corner of the map.